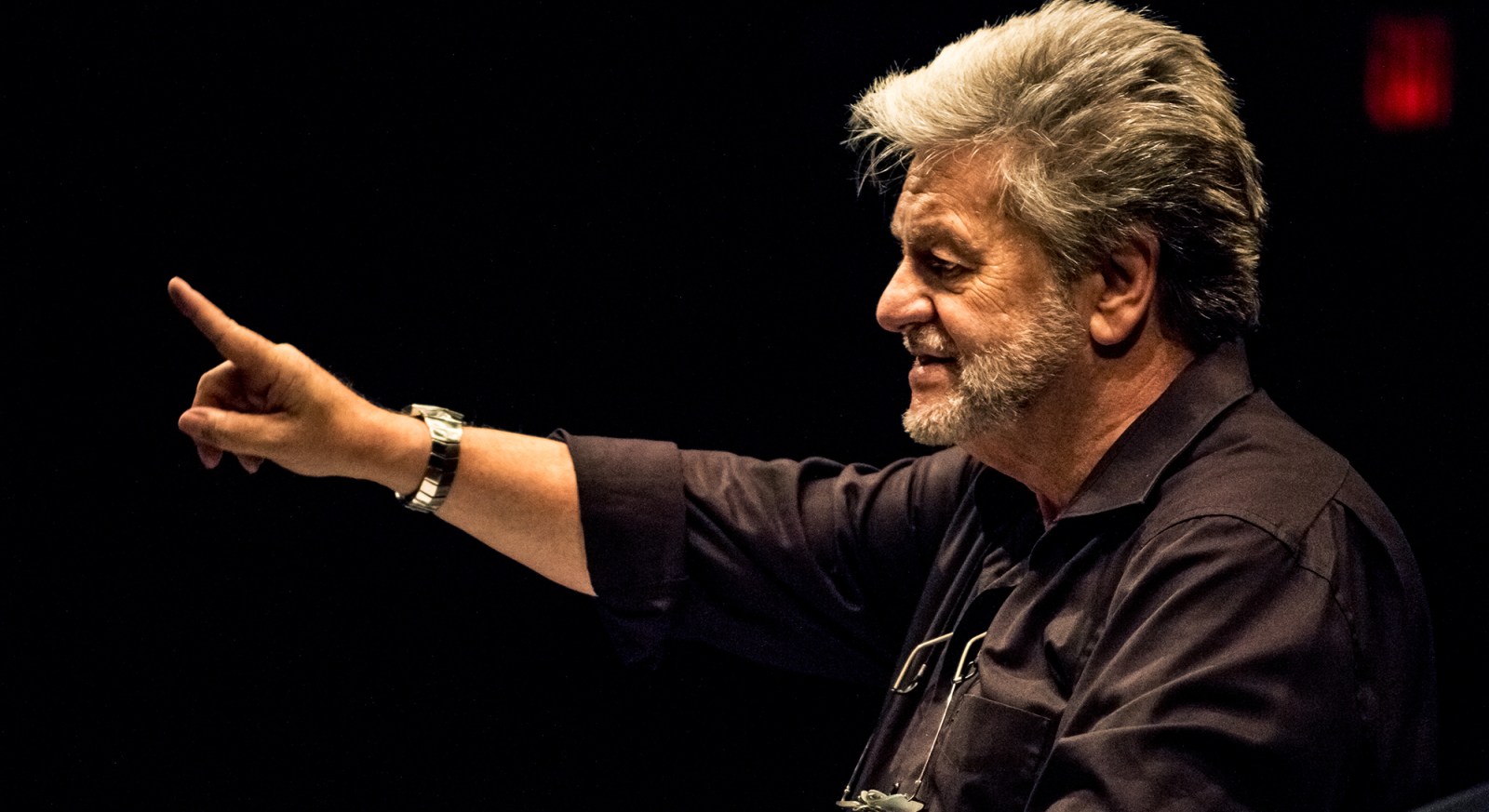 In this interview with Bernhard Gueller, Cape Town Philharmonic principal guest conductor, he warns that major symphony concerts under physical-distancing rules are not sustainable.

When Bernhard Gueller worked as a conductor in the frigid Siberian city of Novosibirsk in the early 2000s, he became aware of the “harsh conditions” that dictated residents’ lives. This, he told Daily Maverick, “gave him the strongest impression of the importance of music”.

“In a harsh world, you see that a Brahms or a Bruckner symphony is not entertainment,” he said, recalling a church congregation there singing gloriously. “These things express that there is something bigger than our lives.”

For Gueller, this idea is best captured in a Berliner Philharmoniker performance in a destroyed Berlin concert hall five years after World War II. Romanian conductor Sergiu Celibidache is on the podium. He is irrepressible. The orchestra’s delivery of Beethoven’s Egmont overture is powerful and triumphant: a rallying cry by the artists of a city split by bombs and redrawn borders.

“You can see the sky through the ruined roof,” said Gueller.

War-torn Berlin, in many ways, is a metaphor for Covid-19 humans, riven as we are by conflict against a virus. Caught in these trenches are the musicians who depend on live music to sustain themselves and, in a different way, us — their audience.

To better understand live musicians’ fight for survival, Daily Maverick asked Gueller how the Cape Town Philharmonic Orchestra (CPO) may rise from the pandemic’s ashes. The CPO’s principal guest conductor, Gueller is a former cellist who has served on podiums across the world. He is also music director laureate of Canada’s Symphony Nova Scotia.

TW: The CPO has cancelled its autumn and winter seasons — and many more concerts. How have orchestra members kept busy otherwise?

BG: They’ve been making their own videos and are preparing for chamber concerts, the first thing we’ll be able to do. From my side, for the first time in decades, I’ve not had a series of concerts to work to. The plus side is that I’ve had – another first – time to listen to long works I’m not working on. For instance, I’ve been able to listen from start to finish to operas and the Bach Passions. This is so rewarding.

TW: What is the emotional, mental and spiritual impact on CPO musicians as a result of the cancellations?

BG: There is enormous sadness and, of course, desperation about the future and how long we can go on.

TW: How has the pandemic changed our classical music experience?

BG: Performances from top-quality orchestras and opera houses like the Berliner Philharmoniker and Metropolitan Opera have been offered free online, opening up a new world to many. Our own musicians have made several videos. People have told us in their dozens how inspirational they’ve found them.

TW: What is the emotional tenor of performing online rather than live?

BG: There’s nothing like music-making in front of an audience. It’s irreplaceable. There’s always some response beyond the applause. An audience always contributes to the atmosphere. That, to a certain degree, influences the performers. In our digital performances, like Meditation from Jules Massenet’s Thaïs opera [Heart-rending – Ed], the only emotion that came up in my mind was this: is this the music-making of the future? My main emotion was sadness.

TW: Through digital, classical music is accessible to thousands more people. Has this had real-world impact on the industry’s well-being?

BG: Many more people have access to classical music digitally, but this doesn’t tell us if more people are watching/listening. We have to wait for surveys, statistics and results. I’m very interested in these, especially in the behaviour of people who until now were intimidated by the whole music business and were thus prevented from going to concerts. It’ll be interesting to see if they become interested in attending a concert and what preferences they show in their choice of music.

One benefit has been that people have seen a personal side of musicians through home-grown videos – children, dogs, playing in shorts and a T-shirt and without shoes. Suddenly, they’re normal people, not people who sit on stage dressed in black.

TW: How can the industry generate revenue through digital access?

BG: Loyalty is important when faced with competition from the likes of the Berliner Philharmoniker’s Digital Concert Hall. We’re strengthened by our supporters, some of whom have been coming [to our concerts] for 40 years and who feel the CPO is part of their family.

TW: London’s Alexandra Palace is hosting the operas La Boheme and The Magic Flute at a drive-in venue in September. Can this work locally?

BG: Even with outdoor concerts, social-distancing remains a problem. How do you keep children still at Kirstenbosch even if you’re 2m apart? Smaller audiences, smaller box office. It’s also true that orchestral sound is lost in a big outdoor venue or drive-in.

TW: What has moved you most during this surreal time?

BG: The funeral procession of a South African nurse in England was incredibly emotional for me.

I always go back to how music inspires and hoped her family had something to help them cope. Of all the arts – music is the one that sustains you. This cannot be clearer than our Intermezzo from the opera Cavalleria Rusticana, made by the Cape Town Philharmonic Youth Orchestra in their own homes.

‘When I perform online, my nerves don’t get the best of me,’ Jordan Brooks, Cape Town Philharmonic Youth Orchestra concertmaster, told Daily Maverick. The young violinist recently accepted a scholarship to attend the prestigious Chetham’s School of Music in England. He can be seen performing at the start of the instantly recognisable Cavalleria Rusticana performance, showing sweeping drone footage of the deserted Mother City during lockdown. ‘Music can help us get through tough times. It brings us together.’

TW: What is the value of classical music in a South African context?

BG: In this country, in this city [Cape Town], we see the benefits of music in social cohesion. We’re fortunate to have a team of dedicated teachers preparing online theory and practical lessons for our Masidlale Grassroots Project learners and some CP Music Academy students. Young people from townships and other disadvantaged areas are given the chance to learn an instrument, to perform in public. In so doing, they’re offered something positive for their after-school hours – they can and do bask in a sense of achievement and self-worth. This spreads to their families and into their communities. In these times of necessary yet difficult social distancing and isolation, we cannot let their music education suffer.

TW: What does live classical music look like over the next decade?

BG: There is a chance that music life within the next decade becomes more interesting and intense. On the other hand, concerts present a problem. With social distancing, spreading out musicians on stage becomes a necessity requiring a lot of space. While strings players can play with masks, what do wind players do? The very nature of their instruments means droplets in the air. How easy is it to keep good ensemble when the players can’t hear each other clearly on this spread-out stage?

What about the audience? Models overseas show that if every second row is empty, and every second or third seat in alternate rows is empty, we’re talking of a 30-40% house. Box-office income doesn’t cover the costs of a concert under normal circumstances, so a concert like this could be difficult to stage. It’s simply not possible for us to treble the price of seats to make that up.

We also have in the audience many older people. A couple have said they won’t be back this year, but we’re encouraged by feedback from people, many who are older, who say they miss us daily and can’t wait for us to come back.

TW: What kinds of classical music are likely to survive or even thrive?

BG: Chamber music will benefit more from the end of this crisis because there are fewer people on stage and usually the venues and audiences are smaller. One must not forget that the audience sits more closely than even musicians on stage do.

But when it becomes clear that it’s safe to come to a concert, the ensembles will get larger and big orchestral works will come back with a big bang. Here, the Romantic and late Romantic music, which is closest to people of today, will be most prominent. It’s this music we can’t play at the moment or for the foreseeable future. There’s nothing like the huge orchestral sound, live.

TW: How can the public support you?

BG: The CPO needs financial support – putting pressure on government. The public’s support for our initiatives tells us we’re in their minds and I hope they continue to tell us this. We’re heartened by the number of people who immediately donated the cost of the first cancelled concert; and those who donated for a season for which they hadn’t even bought tickets. Many rounded up the cost. A few made large donations.

TW: A New York Times piece recently reported that concert halls were packed shortly after the 1918 flu pandemic. Do you envisage the same kind of reaction a century later?

BG: It’ll be like 1918, only slower — we’re now more informed than people were then; we know about protecting ourselves. But classical music will be back. It will receive a huge boost because we’ll really understand what we’ve been missing. DM/MC

This interview was edited for brevity.

To buy tickets and view a full list of CPO performances at the Virtual National Arts Festival until July 11, see the orchestra’s latest newsletter.