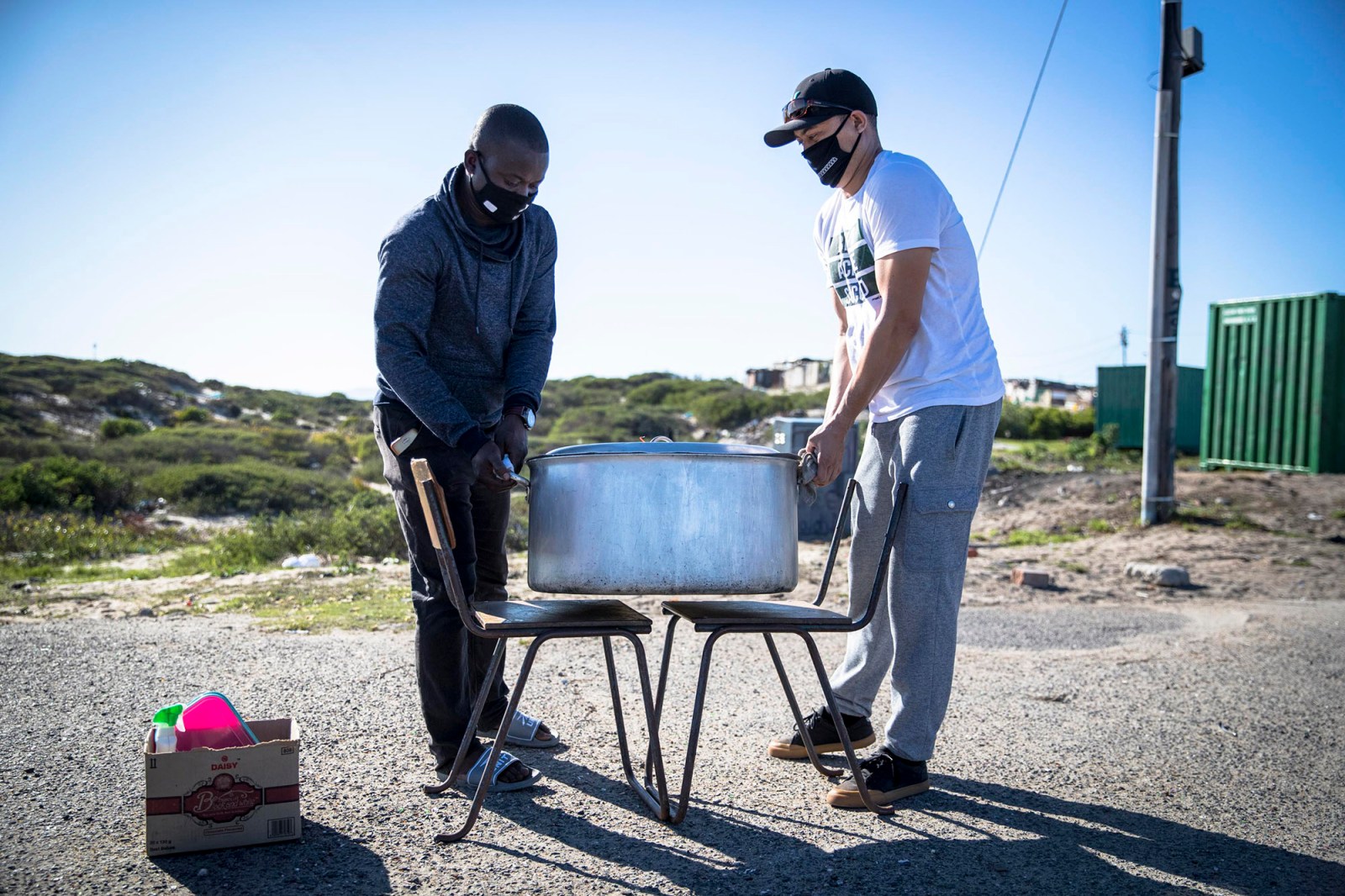 South African surfers have been portrayed in a one-dimensional light during the Covid-19 pandemic. On the ground in Strandfontein, on the Cape Flats, the reality is far more inspiring.

Every morning at 5, Kaltoema Samodien gets up in the dark, brushes her teeth and washes her face. She prays, facing northeast, before having a cup of tea. Then she starts to cook.

Using an enormous steel pot, she mixes 10kg of maize meal and water that she brings to the boil on a gas cooker, using a wooden ladle to stir. It takes on average two hours to make the “pap porridge” that will go towards feeding 500 residents in her community of Strandfontein, many of them young children.

“The children depend on the porridge,” says Samodien as she stirs, adding, “If I get tired, then I get my husband to stir the pot for me. It’s a blessing for us to do it.”

When the porridge is ready, husband Ederies stands out front in the sandy courtyard, cups his hands, and bellows “Pap! Pap! Pap!” as neighbours queue up for breakfast with their containers.

Samodien is part of the 9Miles Project, a non-profit organisation that uses surfing as an intervention tool to run youth programmes in the informal settlements around Strandfontein on the Cape Flats. Her son, Faieq, was one of the first to join the programme seven years ago and has become a dedicated surfer and role model for many of the younger children in their neighbourhood of 7de Laan. His medals are displayed proudly in the room where Samodien cooks.

“Before the crisis, we were already feeding the kids in our programme a meal six days a week,” says Nigel Savel, who founded the organisation with his wife, Sher’Neil, in 2013. “For some of them, it was their only meal of the day.”

The 9Miles Project is named after 9Miles beach, a broad sweep of sand that hugs the northern corner of False Bay before the sand dunes give way to the vast network of informal settlements that buffer the Cape Flats.

“I started surfing here when I was 11,” says Savel. “You could buy alcohol at the age of 13, just across the road. Then down the road you could buy weed, drugs, stuff like that. Many of my old friends got trapped in destructive lifestyles. But the beach was a place where I could escape all these negative influences.”

As an adult, Savel realised that the same freedom surfing gave him could be used to empower at-risk youth by providing them with mentorship and structured after-school programmes.

“Surfing teaches you valuable life skills like discipline, perseverance, and quality decision-making,” he says. “Children are growing up in these impoverished communities with gangsters and drug dealers as role models. We’re trying to change the narrative and break that cycle.”

It is trite to say that South Africa has one of the highest levels of inequality in the world. Even before the Covid-19 pandemic brought the economy to a grinding halt, the last poverty line survey by Stats SA published in 2015 found that 13.8 million people live below the Food Poverty Line – the amount of money an individual will need per month to afford the minimum required daily energy intake. What the pandemic has done is brought this sharply into focus and exacerbated the problem in informal settlements such as 7de Laan. According to Savel, a community mapping survey conducted in April 2020 put unemployment at a staggering 76% in the four communities they work in around Strandfontein.

“Those who do work are on a ‘no work no pay’ basis which makes them unable to earn a living during lockdown,” says Savel. “Most residents are dependent on social grants or community organisations.”

When all youth programmes were suspended under lockdown and the situation in the area became increasingly desperate, the 9Miles Project swiftly focussed its efforts on scaling up and expanding their food programme to the wider community, seven days a week.

“We already had a food manager and cook, and ties to community members and partners, so we ramped up our efforts to try to ensure that the children in our programmes – and the entire community – don’t go to bed on an empty stomach.”

The organisation currently serves breakfast to 500 people and dinner to over 1,000 people daily. Supplies are centrally stored and then delivered to community members, who do all the cooking and serving. Meals are prepared in 80-litre pots and strict hygiene protocol is observed.

“We have staff and community members who help to ensure social distancing, hand sanitising, and the dishing of food,” says Savel.

It costs approximately R5 to feed one person two meals a day and a menu for the week ahead is shared on WhatsApp, featuring dishes like samp and beans, vetkoek with mince curry, and fish breyani.

At the time of writing, the 9Miles Project had served over 65,000 meals since the start of lockdown. They have also distributed masks, hand sanitisers, sanitary pads and nappies in partnership with other community organisations like Hope Southern Africa and HandsandFeet.

According to Savel, there has been a surge of community action networks (CAN groups), along with non-profits and individuals, stepping up to feed the most vulnerable and working together to address the crisis across the Cape Flats.

“Lockdown has exposed the huge food insecurity crisis in South Africa and many have been left desperate and in dire need of support,” he says. “The need is still so great and many people are funding soup kitchens out of their own pockets – with or without the necessary permits – just to keep their communities stabilised.”

According to a recent article by Mark Heywood in Daily Maverick, community organisations like the 9Miles Project have become a last line of defence to fend off hunger and malnutrition during the lockdown, especially for children. As Heywood points out, it’s not enough.

A Human Sciences Research Council (HSRC) study released on 26 April to assess the socio-economic impact of Covid-19 in South Africa stated that 55% of residents surveyed in informal settlement said they had no money for food. In Phase 2 of the survey, 46% of respondents from informal settlements said they had gone to bed hungry during the lockdown. A number of experts warn that food security and rising levels of hunger are among the greatest threats facing the country in the months ahead.

Savel says the organisation’s Covid-19 relief programme has been well supported by local business and the public so far but the most immediate challenge will be to sustain funding. Even with the move to Level 3, he expects many residents will still be unable to work or earn a living to provide food for their families as the economy struggles to recover.

“On a personal level, it has been hard seeing the children in our programme and not being able to hang out with them, hug them or go surfing with them,” says Savel. “It’s encouraging though to see that their indomitable spirits are firmly intact. They are the reason we keep going.” DM

The 9Miles Project also runs programmes in the informal settlements around St Francis Bay in the Eastern Cape and Elands Bay on the West Coast. www.9milesproject.org