Comrades Marathon cancelled, DA will try to bring down the lockdown in court and a new loan scheme is launched by Treasury 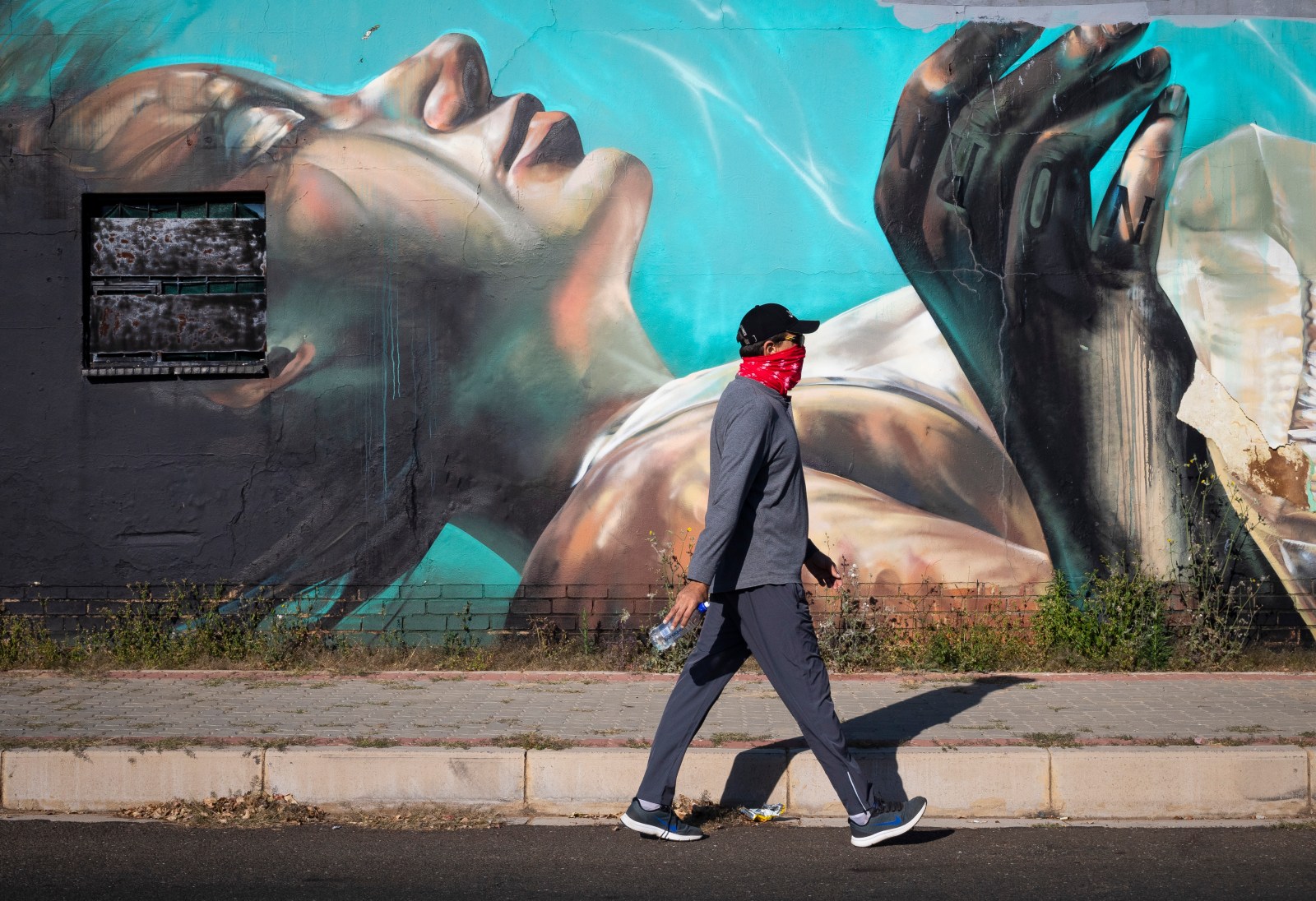 A man walks past an artwork by German artist Norm Abartig (@norm_abartig) and South African artist Nicholas Kerr aka Dekor One (@dekor) on day 46 of the national lockdown as a result of Covid-19 Coronavirus, Johannesburg, South Africa, 13 May 2020. The country is at level 4 of the national lockdown in its 46 day after it was implemented on 30 April 2020. EPA-EFE/KIM LUDBROOK

On Thursday 14 May, the Comrades Marathon was officially cancelled and the DA announced it will try to bring down the hard lockdown via the courts. Meanwhile, Finance Minister Tito Mboweni has set a date for the Covid-19 special adjustment Budget to be tabled, and Treasury launched a new loan scheme to help businesses tick over during the lockdown.

Swipe through the gallery below to view the latest Covid-19 numbers available on 14 May at the district level. All maps are sourced from provincial health departments; however, Eastern Cape, Mpumalanga and Free State did not provide updates by the time of publishing: 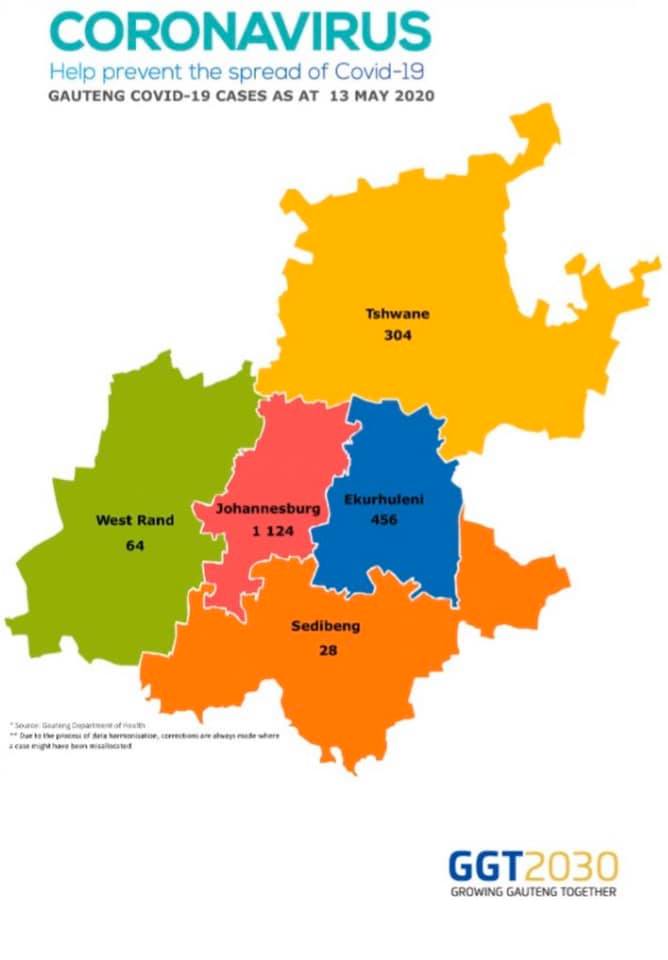 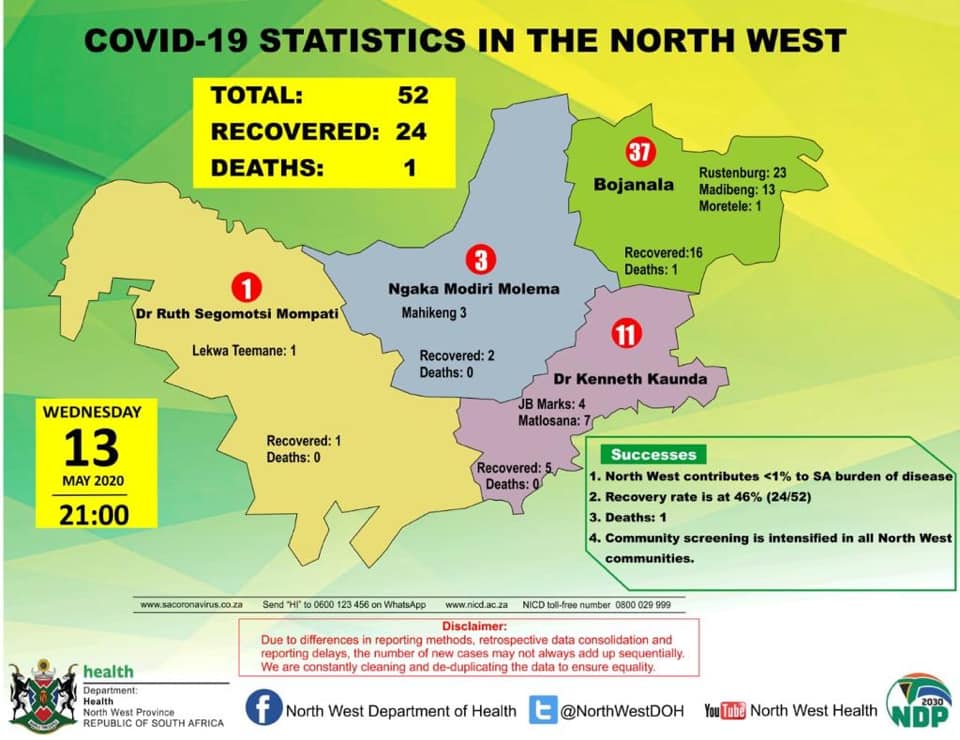 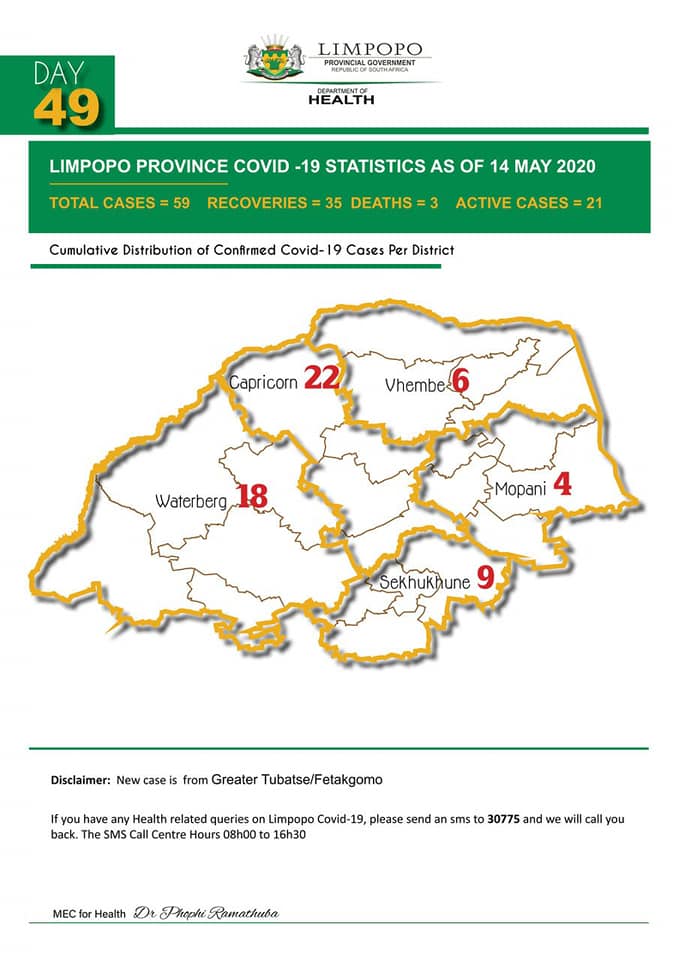 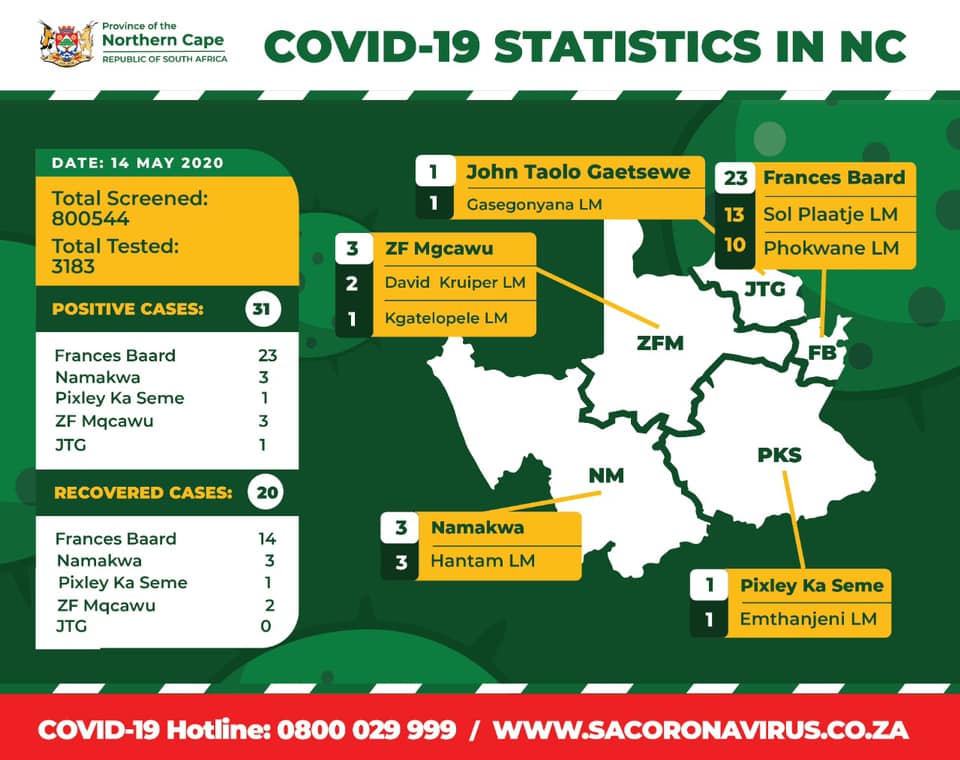 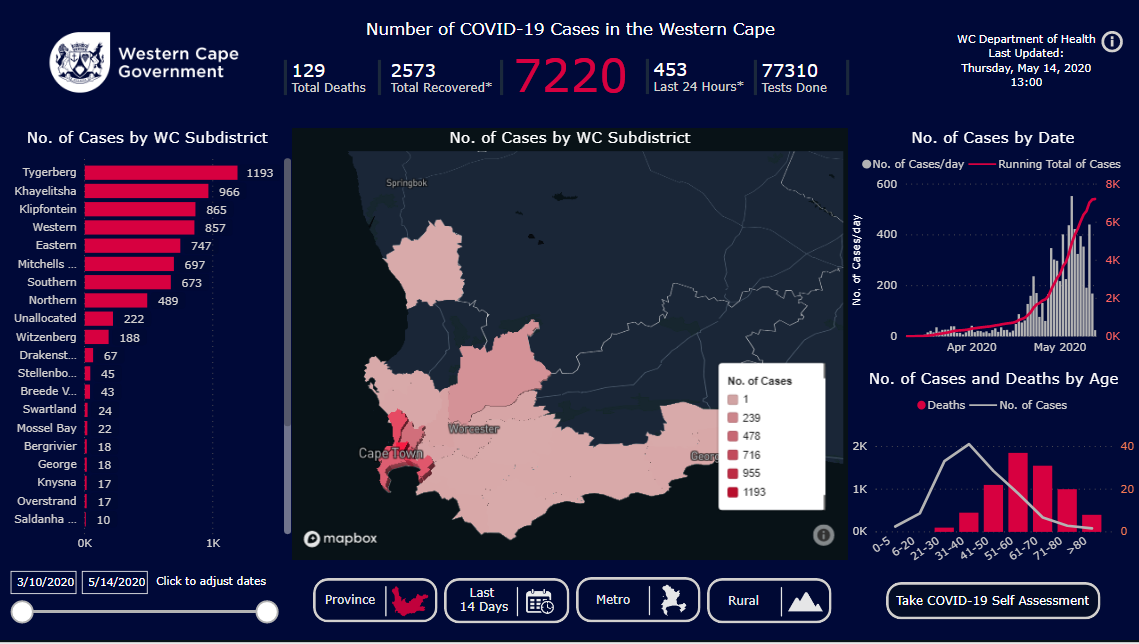 More than 200 people have lost their lives to Covid-19 in South Africa. Daily Maverick has published the tributes to two men felled by the virus in the past week. Lindsay Dentlinger has collected personal memories from journalists who worked with a “gentle giant of a journalist”, senior eNCA cameraman Lungile Tom, who died on 13 May. Mark Heywood reflects on the activism of “a champion for health and human rights”, Dr Clarence Mini, who died on 11 May.

As Craig Ray writes: “The long road to reach a decision to cancel the 95th edition of the Comrades Marathon felt like an ultra-marathon in itself.” Indeed, the iconic race was officially cancelled on Thursday 14 May after it had been postponed in April to an unspecified date. Citing the coronavirus pandemic, the organisers decided to cancel to protect the health and safety of everyone involved.

On Thursday, the DA announced it would be heading to court on Friday 14 May to file papers challenging the “constitutionality” of the Disaster Management Act. As Chanel Retief reports, the party is calling for an immediate end to the current hard lockdown.

Finance Minister Tito Mboweni has announced that the Covid-19 special adjustment Budget will be tabled on 24 June. However, the announcement was made before the date was discussed and agreed upon in Parliament. Marianne Merten unpacks what this surprise move says about the pressures to get the country’s finances in order.

Meanwhile, a briefing meant to be focused on preventing the spread of Covid-19 turned to the topic of corruption on Wednesday while Human Settlements, Water and Sanitation Minister Lindiwe Sisulu addressed the media. As Greg Nicolson reports, Sisulu “promised” to deal with corruption in the department.

In the Eastern Cape, 10 activists have been freed after being arrested for violating lockdown regulations by having a meeting to discuss grim water problems in their communities during lockdown. As Estelle Ellis reports, the group’s leader, Harvey Ntshoko, said they met with a prosecutor and were told there was no case, and not even a docket. The group has vowed to continue their fight for access to water.

National Treasury has announced that a scheme involving loans with government guarantees to help businesses with an annual turnover of less than R300-million has been activated. The loans are aimed at helping them meet their operational expenses, such as rent and salaries. So far, participating banks include Absa, FNB, Investec, Mercantile Bank, Nedbank and Standard Bank. As Ed Stoddard writes, this initiative might be a lifeline for many under lockdown. See this Frequently Asked Questions guide to read the finer details.

There’s a new trickster in town taking advantage of the cash-strapped under lockdown. As Ruan Jooste reports, Invest200 is “a Ponzi scheme by another name”. Read the investigation here.

There are some private schools offering relief to parents under financial strain during the lockdown, according to the executive director of the Independent Schools Association of Southern Africa, Lebogang Montjane. As Ayanda Mthethwa reports, the association foresees that their “finances are going to struggle and debtors’ books will increase”.

Lockdown has forced hospitality, casual labour and domestic work to dry up in the Karoo, exacerbating existing poverty and hunger. Estelle Ellis spoke to humanitarian aid teams about what they are witnessing.

In the Western Cape, the provincial Department of Local Government has barred councillors from being involved in food distribution. As Suné Payne reports, this comes after a series of accusations were made that food parcels were being distributed along party lines. DM