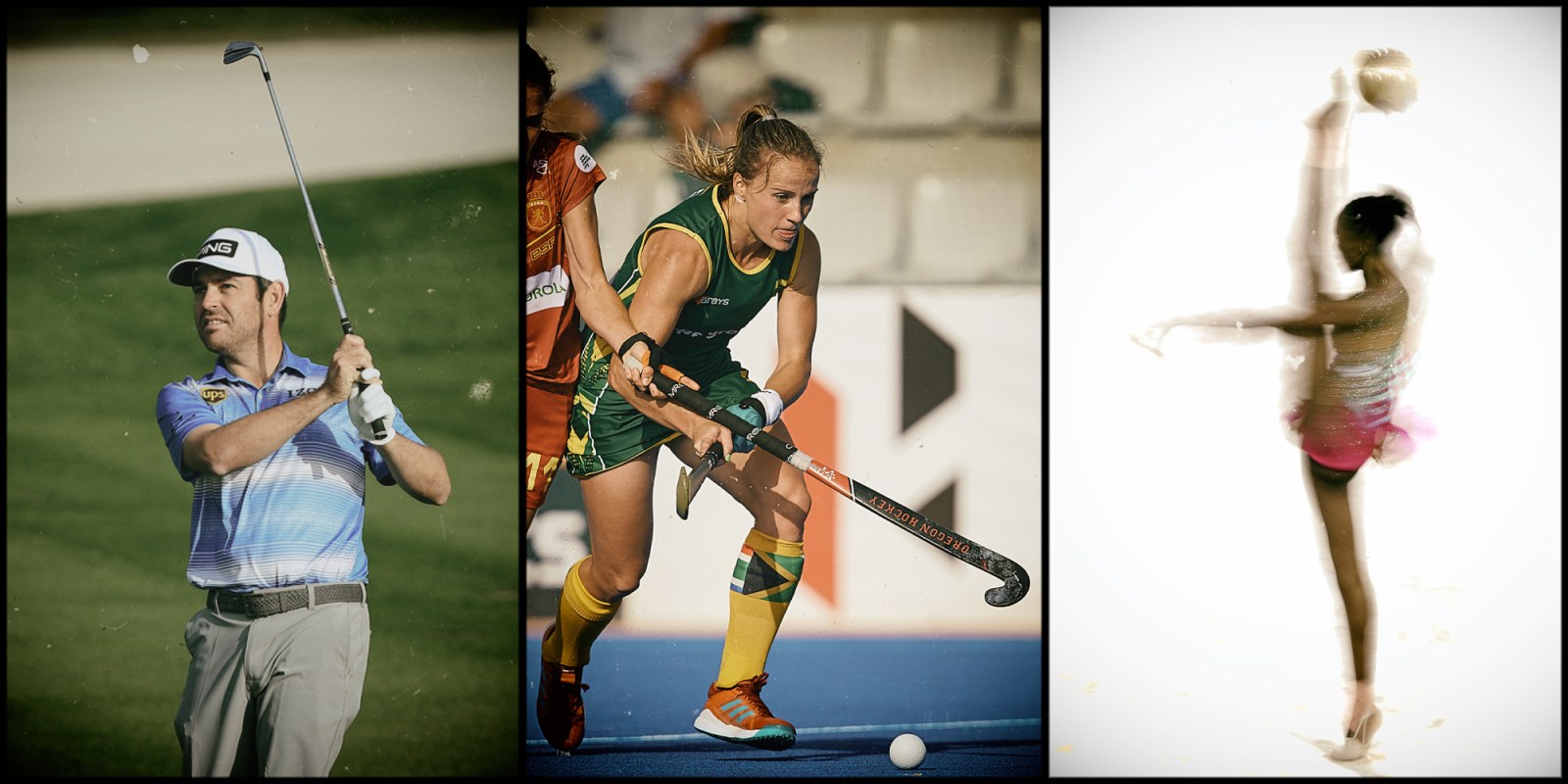 Louis Oosthuizen of South Africa plays his second shot on the fourth hole during the first round of The PLAYERS Championship on The Stadium Course at TPC Sawgrass on March 12, 2020 in Ponte Vedra Beach, Florida. (Photo: Matt Sullivan/Getty Images) / Erin Hunter (R) of South Africacompetes for the ball with Cristina Guinea of Spain during the FIH Women's Series Finals Valencia 2019 Semi-Final match between South Africa and Spain at Estadio Betero on June 26, 2019 in Valencia, Spain. (Photo: David Aliaga/MB Media/Getty Images) / Grace Legote of South Africa performs with the ball in the Individual All-Around Final during the Rhythmic Gymnastics on day eight of the Gold Coast 2018 Commonwealth Games at Coomera Indoor Sports Centre on April 12, 2018 on the Gold Coast, Australia. (Photo: Ryan Pierse/Getty Images)

Financial difficulties induced by the suspension of sports due to the coronavirus pandemic will have long-term negative effects on South Africa’s sporting fraternity – with some federations feeling the pinch more than others.

“We anticipate that we will have at least three to four months to survive. What is also of concern is that it will take some time post lockdown to kickstart our leagues and to start revenue collection. We will be most vulnerable during that phase in the months to come.”

These are the words of Hockey South Africa chief executive, Marissa Langeni. Her federation is one of those that have been hardest hit by the Covid-19-induced national lockdown.

As well as not having their athletes participating in any sports, different federations have taken varying degrees of financial knocks as their functionality has been hindered by the Covid-19 outbreak.

The bigger and more established federations that oversee the mainstream sports of soccer, rugby and cricket have felt the pinch, but not nearly as much as the smaller federations in the country such as the ones that oversee gymnastics and hockey respectively.

Just last week, the rugby fraternity in the country agreed to player salary reductions that will total 12.5% of needed cuts if no rugby is played for the rest of the year. The industry hopes to save R1-billion from the cuts over the next eight months to ensure post Covid-19 viability. In addition to the players, senior management at SA Rugby and the 14 provincial unions, as well as other staff, will take cuts. The lowest earners such as cleaners and catering staff will not be subject to cuts.

In the football fraternity, pay cuts are looming at Premier Soccer League teams as the season hangs in the balance, while senior management at the South African Football Association (Safa) has announced that they will be taking pay cuts of 15% across the board. The federation also indicated that they approached world football’s governing body FIFA for emergency funding, which had been approved.

Meanwhile, Cricket South Africa (CSA) indicated that a prolonged inability to play would be detrimental to their finances, with the federation saying that not being able to play sport for six months onwards would mean they lose out on broadcasting revenue.

However, as much as these three mainstream federations find themselves in such precarious positions, for some federations, such as Hockey SA, the reality that they might not emerge at all from the Covid-19 economic bloodbath, is very much a reality.

At the end of March 2020, the Department of Sport, Art and Culture announced a relief fund to the tune of R150-million, which those in the sports and arts sectors could apply for and share.

However, the department’s criteria was very strict: “Only athletes who were confirmed to participate at events that have now been cancelled or postponed due to Covid-19 and whose income is generated solely through specific sporting events,” could apply.

“The niche criteria set for the Relief Fund meant that we were not able to apply for any relief aid. The criteria referred specifically to athletes and their coaching support staff who would have earned income from an event that was cancelled during the period March to June 2020,” Hockey SA’s Langeni told Daily Maverick. “Hockey is an amateur sport in South Africa and as such, players do not earn a salary from playing hockey. While we have had events cancelled in the said period, our players would not have derived an income from these events.”

The South African Gymnastics Federation (SAGF) had athletes who qualified to apply for the relief fund from the department as they had been participating at the Artistic World Cup in Baku, Azerbaijan. The showpiece was cancelled mid-competition in March 2020. The African Artistic Championships scheduled for April 2020 in Tshwane were also postponed.

“We had athletes who were eligible and applied for the funding. These were gymnasts who had previously won prize money at World Cup events. Most notably is Caitlin Rooskrantz, who had qualified for the finals at the Baku World Cup and was guaranteed prize money. That event was cancelled mid-way and she was unable to compete in the finals. The gymnasts at African Championships would not have won prize money so were not eligible for relief funding,” SAGF chief executive, Anne Vermaak told Daily Maverick.

Vermaak added that her federation’s primary sources of income are annual registrations and event income, of which competitive gymnasts make up the biggest contribution. Other sources include the Department of Sports, Arts and Culture grants and Lotto grants.

With these resources being strained, while also needing to trickle down to the structures that fall under SAGF, the federation will be stretched in the coming months. Despite this, as it stands, they have no intention of approaching the department for further financial assistance.

“At this stage, we have not considered approaching the national department for financial assistance. We are looking at innovative ways to ensure the financial sustainability of our federation. Like all federations, we work across national, provincial, district and club levels, and we understand the unique challenges each face. We are in contact with all levels within the federation, especially club level, where we anticipate the biggest need for assistance,” stated Vermaak.

“We have recently launched an online programme, Gymnastics SA Club Connect, a support service to registered clubs, giving them access to various business tools. We will continue to reach out to all clubs during this difficult time,” she continued.

Langeni, however, shared that their situation was a bit more precarious and that they intended to approach the department of sports to seek financial assistance.

She said with no hockey being played countrywide, the federation was struggling to collect affiliation fees, which are normally due at the end of April and May, adding: “If the situation persists, we will all be in real trouble especially those provinces who have full-time employees and the national office.”

“Our plea is for the sport sector not to be forgotten, the relief fund with the criteria as announced only covered two parts of the sporting sector ecosystem. Many have lost revenue during this time – umpires/referees, technical officials, coaches, clubs, sport administrators (regional, provincial and national),” stressed Langeni.

Meanwhile, another federation, Golf RSA, announced on 27 April 2020 that it was looking to raise R1-million in order to reach the demographic of employees mentioned by Langeni. The Sunshine Tour had already pledged to assist golfers around the country, but their drive only benefited the professional players and a small pool of caddies, leaving support staff employed by clubs, casual caddies and amateur golfers out in the cold.

“It’s no secret that the Covid-19 pandemic has wreaked havoc on the golf industry and, with more than 400 golf clubs in this country, employees at most of these clubs have been severely impacted by the nationwide lockdown,” explained Golf RSA CEO Grant Hepburn. “Those worst affected are the caddies and casual workers. Sadly, most of these individuals were living close to the breadline even before the lockdown and are now battling to provide for their families.

“We acknowledge and applaud the numerous golf clubs, their members and general managers and PGA professionals, as well as organisations within the golf industry that have already implemented much-needed schemes and initiatives aimed at assisting employees and casual workers.

“In total, more than R5-million has been raised to date by golf facilities to support their casual workers and caddies. However, with so many golf clubs struggling for survival, we decided to initiate this compensation fund that will assist those individuals who did not receive any help from their respective clubs,” added Hepburn.

Tough times lie ahead for sports federations around the country, and like many businesses already predicted not to survive the pandemic, they too may not survive. Which could mean an end to some of the sports they facilitate. But more importantly, an end to employment for many South Africans dependent on them. DM