Ruben van Heerden (C) of the Sharks is tackled during the Super Rugby match between Sharks and Jaguares at the Jonsson Kings Park, Durban, South Africa, 07 March 2020. EPA/GERHARD DURAN

The final version of the deal between South Africa’s 717 professional rugby players and their employers was finalised at the weekend, which will see the players contributing 12.5% to the proposed total R1-billion in industry budget cuts if no rugby is played this year.

Eugene Henning, chief executive of MyPlayers, the trade union representing South Africa’s professional players, will sign on behalf of the members this week after three weeks of talks to reach consensus.

Negotiations started on 3 April and have moved swiftly and with minor hiccups as players recognised that they would not be immune to the knock-on effects of the coronavirus, which has suspended all competitions globally.

MyPlayers facilitated a collective bargaining approach. It was the best way to achieve an equitable outcome. Pay cuts will start at the end of May and as it stands, the wealthiest players will sacrifice most.

The conditions of the players’ deal are the same for the entire industry, which includes senior management at SA Rugby and the 14 provincial unions, to the cleaners and catering staff at those organisations.

The Terms of the collective agreement were broken down into nine points:

A 95% participation was agreed because 100% was unrealistic and it was felt that if 10 out of 717 players disagreed, it wouldn’t be for the collective good. As it turned out, 95% was easily reached.

Players in particular wanted to ensure that if they were going to make sacrifices, so would administrators. Also, players’ commission payments to agents would reduce in line with the agreed wage cut percentage. For example, if a player earns R100 and his agent is entitled to 7.5% commission, the player pays his agent R7.50. If the player’s salary is reduced by 15% to R85, the agent’s commission drops to 7.5% of R85, which is R6.40.

Should South Africa return to play earlier, the pay cuts until 31 December could be revised. The Industry Covid-19 Committee (Covcom) will reassess the industry’s approach every two months. But if guarantees of bonus payments and salary increases existed prior to this agreement, they should be honoured. Pay cuts would apply to the new salary amount.

Players (and general employees) earning under R240,000 annually are not subject to any pay cuts. Players have also been offered pension relief, which means they won’t face deductions on the pension portions of their salaries.

The entire system is a sliding scale as seen in the table below. 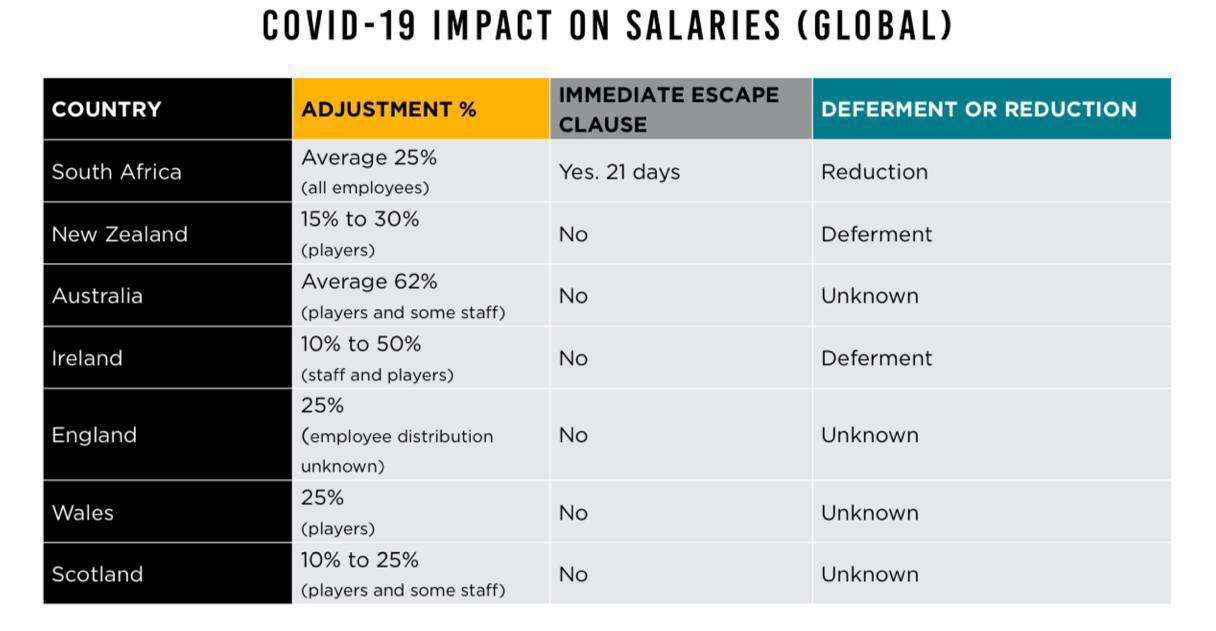 The most controversial issue in the negotiation was the inclusion of a 21-day escape clause for South African players. Players unhappy with the situation have a chance to seek alternative employment. That is unlikely though, given all the major global leagues, especially those in France and England, have imposed pay cuts as well.

Normally there is a 60-day escape clause in any contract, but under the framework of the collective bargaining agreement, players conceded to 21 days.

It for this reason several agents have been unhappy about the collective agreement as they also feel the brunt of coronavirus. Daily Maverick has learned that several agents are trying to convince their clients to exercise their 21-day option.

But it was far more than any other of the major rugby playing nations, who offered no option for releases from their existing contracts.

“We put the release clause in there because the transfer window in Europe is open now,” Henning told Daily Maverick. “But in reality, very few players will be able to find contracts under the current conditions.

“It was a clause that also put the entire rugby industry at risk because, in theory, all 717 players could exercise that option, which would see the complete collapse of the rugby industry. Obviously, that scenario is unlikely, but theoretically, it could happen, and I can tell you there were some nervous employers.”

Normally, negotiations for an early release from contracts take place in an individual capacity between an employer and player. The industry’s decision to include this term in a collective agreement was unusual and an indication of the willingness to act fairly and reasonably given the circumstances.

This, among many different interests, had to be weighed against each other, but it was felt that the wellbeing of the industry post-Covid-19 should be the primary consideration.

During the negotiations, a collective agreement between the employers and players would not have materialised had the players insisted on a longer contract termination period.

Without a collective agreement, players would have been left to fend for themselves individually, which could have put them in a worse labour position. By opting for a shorter release period, the industry reached a balanced collective agreement that takes into account the interests of the various stakeholders.

Players were told that the 21-day termination window (24 April 2020 to 14 May 2020) should not be interpreted as the industry forcing players to accept a salary reduction, “or else”. This condition had to be met in order to reach the agreement that would provide employees with the greatest level of job security during the pandemic.

“Collective bargaining was attractive in this situation because what has been happening is no one’s fault. You can’t sue coronavirus, you can’t interdict or arrest it, and no single entity is accountable for where we find ourselves,” Henning said.

“The only sensible thing to do was to take a collective approach because this is not a result of human error. Collectively it was better for players to be united.

“If players and staff individually entered into negotiations and looked at their positions under current labour law, it is a bleak picture. Labour law allows for steps such as short-time pay, unpaid leave and in extreme cases retrenchment. There are 1500 employees in the rugby industry of which we represent approximately half.

“We could have left everyone to themselves but we instead took the approach of finding a solution that would cause a little pain across the board but save jobs.” DM