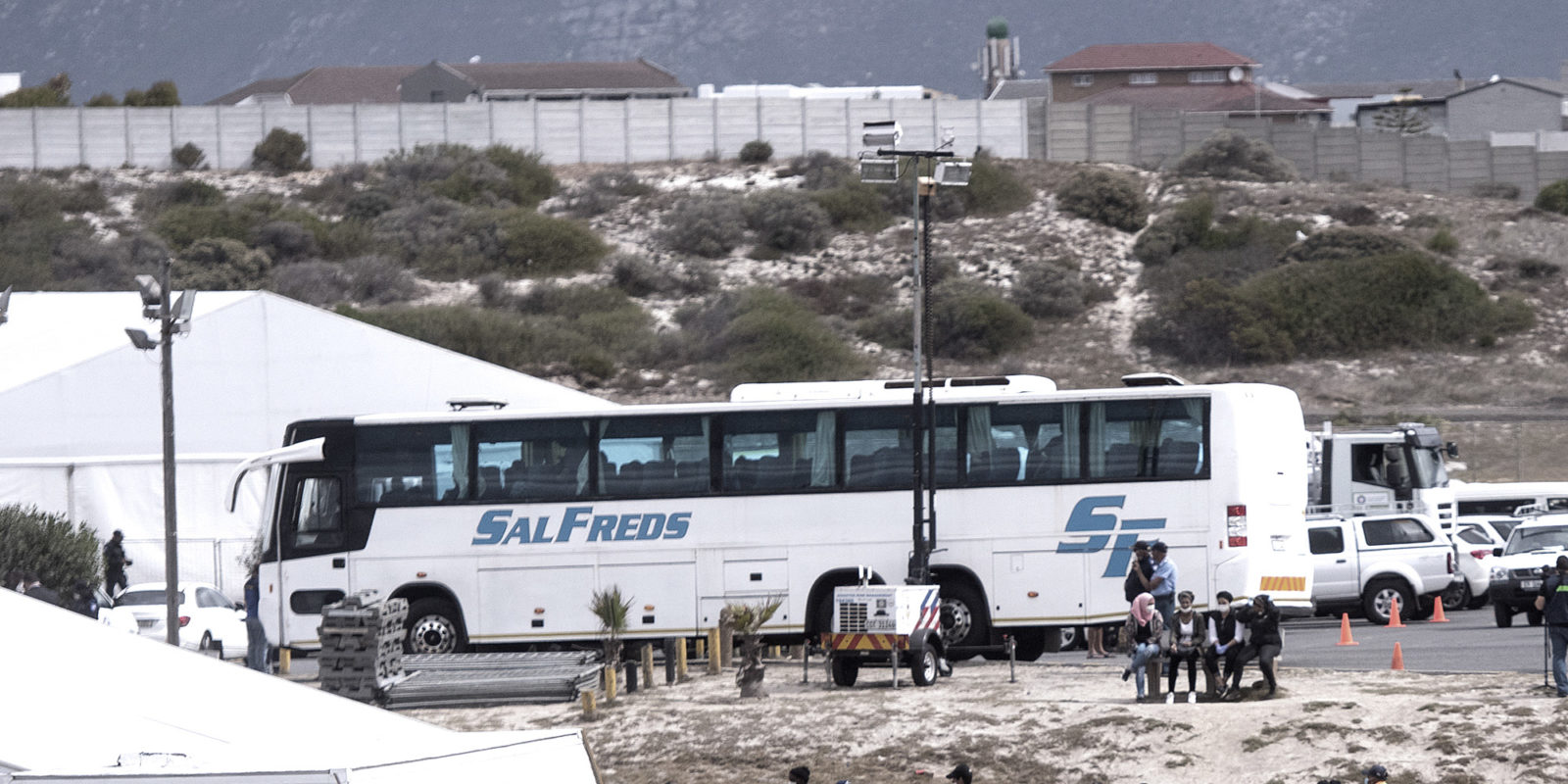 Displaced people who were moved from all around the Western Cape on 5 April 2020 to a temporary shelter at Strandfontein Sports Field in Cape Town. (Photo: Gallo Images / Brenton Geach)

She has been placed on special leave for two months, one without pay, and has been made to publicly apologise after a picture was posted on social media showing her having lunch at the home of former deputy higher education and training minister Mduduzi Manana.

Failure to stay at home earns a first-time offender a fine of R1,500, writes Greg Nicolson. Opposition politicians are calling for Ndabeni-Abrahams to be charged, and the president seems to agree that “the law should be allowed to take its course”.

While Ndabeni-Abrahams gets a “slap on the wrist”, homeless people are being shot at with rubber bullets for protesting and trying to leave a tented camp where they have not been provided with necessities such as food or medical treatment.

Since Sunday, hundreds of homeless people have been bused to the temporary camp set up at the Strandfontein Sports Ground as part of the City of Cape Town’s response to the national disaster.

Lucas Nowicki and James Stent heard from numerous people at the camp that this was a far cry from what they’d been promised when they boarded the bus. A doctor who visited the site described it as a “shitshow”.

The City of Cape Town has also let down refugees bused to the Paint City site in Bellville. More than 500 people were moved from the Central Methodist Church on Greenmarket Square to the site last week, where they are all expected to stay in one large marquee tent.

In the meantime, the City and the departments of Home Affairs and Public Works and Infrastructure are in disagreement about whether the site should have even been used in the first place and who has the authority to decide.

Meanwhile, shack dwellers are on tenterhooks in Ekuphumeleleni and Azania townships near Durban. They fear they could be violently evicted from their homes at any moment after shack dwellers’ movement Abahlali baseMjondolo failed to secure an interdict against the Ethekwini Municipality to stop what it argues are illegal evictions.

Evictions are unlawful under the lockdown. However, the municipality argued it was stopping land invasions and demolished unoccupied shacks. Tania Broughton and Nokulunga Majola set out the arguments made in court.

The South African Food Campaign has released a proposal which argues that supermarket chains need to set up a “people’s pantry” in each store where customers can buy and donate groceries and other essential goods. They say that peace is not possible when people go hungry. Nearly 40 organisations have backed the proposal and its petition has amassed 700 signatures. They await a response from President Cyril Ramaphosa, ministers and supermarket CEOs. The campaign spoke to Shani Reddy about the details of their plan of action.

In the Eastern Cape, hunger is taking its toll as the second week of lockdown starts to draw to a close. Estelle Ellis writes of a pastor who had to stop handing out food in Soweto-on-Sea, a township in Nelson Mandela Bay, after a fistfight broke out because people were so desperate to get to the food. Feeding schemes are also starting to run low on stock and have to find creative ways to get food to people. People are risking arrest in order to ask around for food.

Emergency calls to state ambulances have decreased by 40% in the Eastern Cape since the lockdown began, but community leaders say it is not solely because of the ban on the sale of alcohol. They have observed that the illegal trade in alcohol is huge and drinking continues despite high prices. Estelle Ellis spoke to them and other authorities about what is going on.

Yesterday, the National Institute of Communicable Diseases started screening and testing all prisoners and officials living and working at the East London Female Correctional centre after an official tested positive for Covid-19. As Pauli van Wyk writes, this is South Africa’s first prisons coronavirus case.

Kathryn Cleary travelled to the Wild Coast in the Eastern Cape to report on how the communities are faring under the lockdown. Cleary writes that residents and organisations are working hard to prepare for the arrival of Covid-19 in their areas, despite how difficult it can be to implement the restrictions and spread awareness. 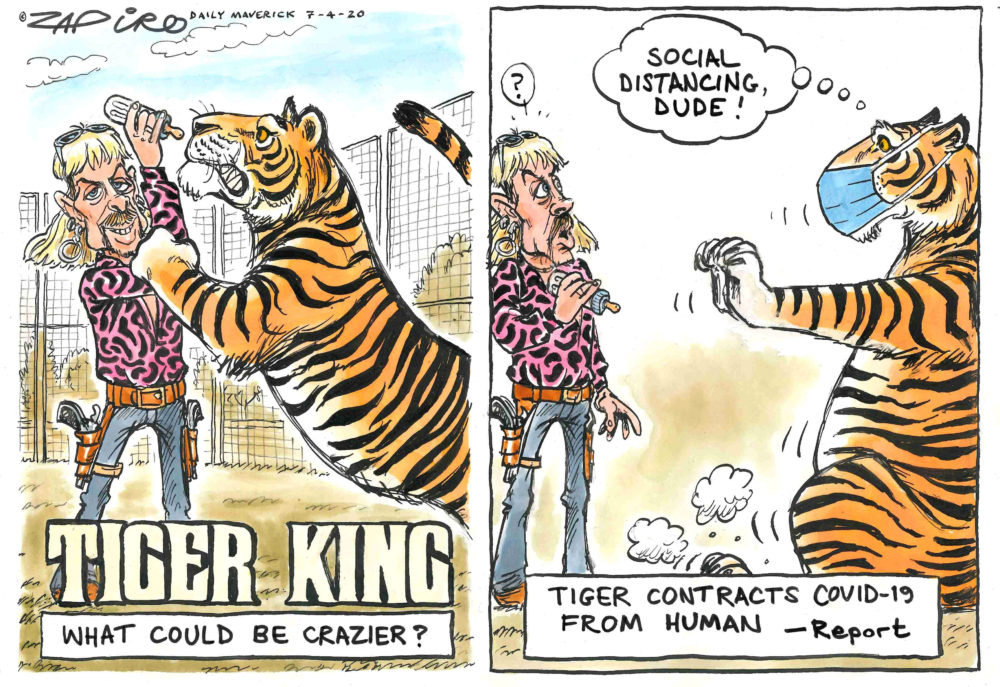 Since the lockdown began, organisations which assist the survivors of gender-based violence and domestic violence have seen a drastic drop in calls. As they told Greg Nicolson, they believe this is not a case of decreased violence, but that people do not feel it is safe to seek help because they are locked in with their abusers and are “living within the violence”.

Meanwhile, Discovery Health medical scheme has backtracked on its decision to pay less for virtual psychotherapy consultations. As Shani Reddy writes, this comes after an outcry from psychologists and psychiatrists through the Psychological Society of South Africa. Now, Discovery will reimburse online therapy at 100% of the usual rate.

Parents who are separated can breathe a sigh of relief – children can now move between parents during the lockdown. This is only if parents have an existing court order, a registered rights agreement or a parenting plan and if the child has no risk of getting Covid-19 by going to the other household.

Those documents need to be on hand when the child is being transported by the parent or caregiver. As Greg Nicolson writes, previously children had to stay with the parent they were with at the beginning of the lockdown irrespective of co-parenting agreements.

There are already reports of healthcare workers in South Africa having to reuse the few items of personal protective equipment they are allocated. Universities, tech start-ups and innovation hubs have heard the call of healthcare workers and are putting the tools they have to work to make the situation better before it gets worse.  As Ayanda Mthethwa writes, Wits University engineers are gearing up to make up to 500 face shields.

The University of Johannesburg is doing the same and hopes to use a 3D printer to speed up the process and its yield. The Central University of Technology in the Free State is aiming to produce 200 masks and hundreds of bottles of hand sanitiser for the province. DM