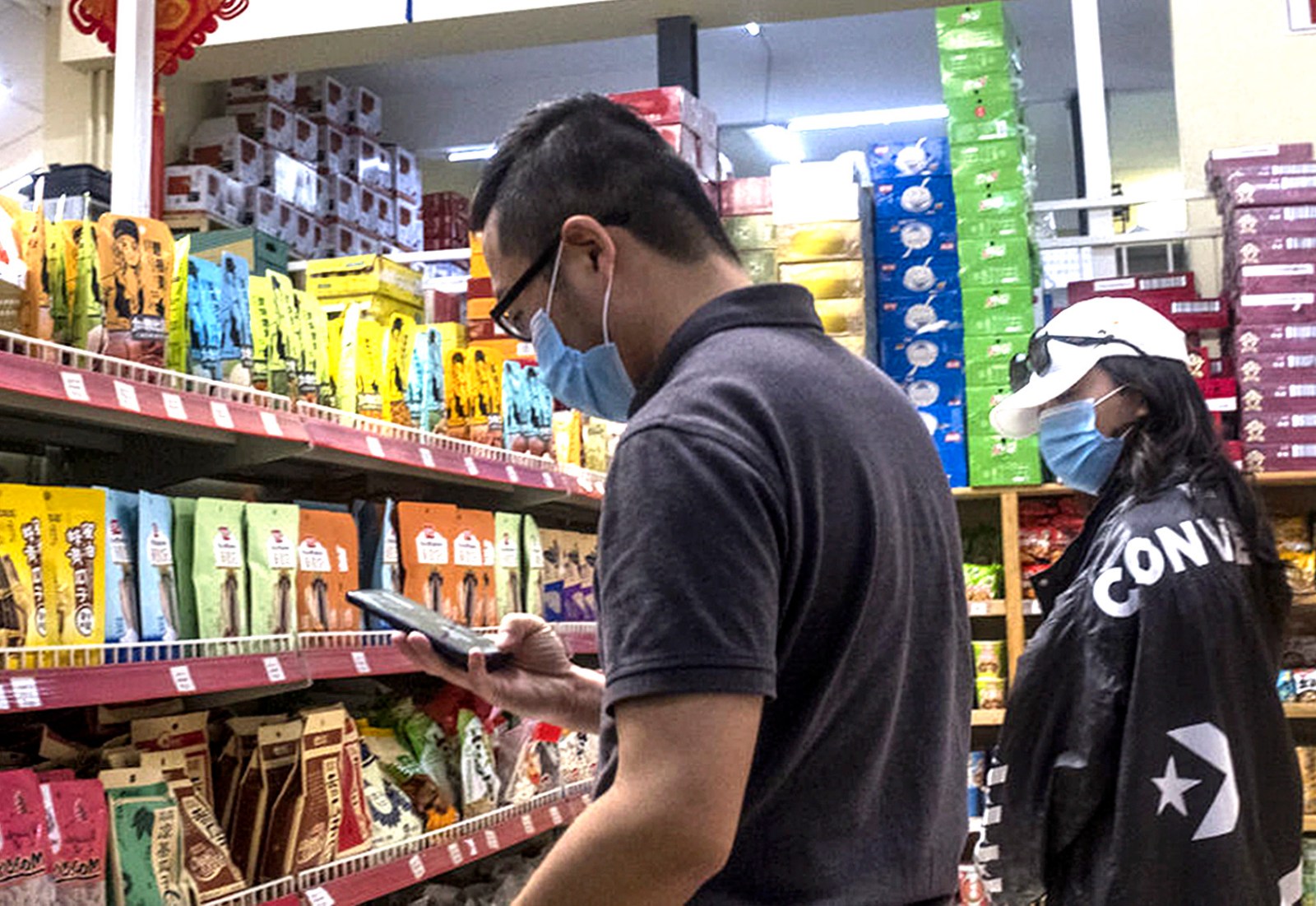 Customers wear protective face masks as they browse goods at a Chinese supermarket in the Cyrildene Chinatown area of Johannesburg, South Africa, on Saturday, Feb. 29, 2020. Health experts have voiced concerns over the possible spread of the coronavirus in African nations that may be ill-equipped to handle such a crisis. Photographer: Guillem Sartorio/Bloomberg via Getty Images

The South African Food Sovereignty Campaign says hunger is ‘going to be a trigger for social conflict’ and government and supermarket chains should step up efforts to resolve the food crisis in South Africa, especially during a State of National Disaster.

The South African Food Sovereignty Campaign, which has been campaigning against food injustices in the country for the past six years, sent a proposal to President Cyril Ramaphosa, relevant ministers and CEOs of supermarket chains this week.

Currently, the government relies on the corporate controlled food system, such as large supermarket chains, to ensure that people are fed. Such supermarkets provide an essential service, but many South Africans cannot afford to purchase goods from them.

Although the lockdown makes it difficult to get food to communities in need, the organisation says that getting food to people who need it can be done by using in-store peoples’ pantries as collection sites and “solidarity buying” every time a person goes to a supermarket.

“Most supermarkets have a reach across the country, including urban and rural areas. Government police services and the defence force are at the direct interface with communities.

“Sustaining a peaceful situation is proving to be difficult in many poor communities. To assist, police and soldiers can keep the peace by playing a central role in distributing solidarity goods,” the statement said.

In the proposal, the organisation demands the following from supermarket chains and government:

First, every supermarket chain sets up a peoples’ pantry in each of their stores. “This will be a collection system in every supermarket for consumers to donate a bag of groceries, medical and other essential goods (priced ethically). All stores are to provide a free ‘peoples’ pantry bag’ at the entrance so it is clearly visible, with promotional information and signs so consumers are aware of this choice.” This option should also be available online.

Secondly, “these supermarkets must work with the government to ensure the food reaches food stressed communities”. The organisation is demanding that police and the South African National Defence Force (SANDF) play a central role in distributing the ‘peoples’ pantry bags’ or solidarity goods.

Moreover, local faith-based and community leaders should monitor that this is being done and the “government must publicly account for this in the messaging from the Disaster Management Command Structure”.

Thirdly, food donated by urban supermarkets must be sent to rural supermarket pantries.

Fourthly, these supermarkets must keep accurate records of donated foods and should include information on where the food is distributed. These records must be kept in order to be audited after the pandemic. The South African Food Sovereignty Campaign also demands access to this information should they require it.

Finally, the organisation is demanding that all unsold fresh goods in supermarkets be given to employees of the supermarket.

Nearly 40 organisations have endorsed these demands, including Engineers Without Borders Wits and the African Centre for Biodiversity.

The organisation has initiated a petition, which already had nearly 700 signatures and will keep going until these demands are accepted.

Food Forward South Africa has put measures in place to ensure that they escalate food provisions to all their most vulnerable groups across the country in the coming months.

This includes “facilities and centres for the aged, orphans and vulnerable children, people living with HIV/Aids, disabled persons, the homeless, as well as vulnerable women,” says the organisation.

According to Food Forward SA, “providing optimal nutrition is critical in maintaining a strong immune system at this time”.

FoodForwardSA has launched a special R50-million appeal to be able to “scale and provide critical food provisions to our most vulnerable groups across the country”.

The organisation is appealing to the public to either make a financial donation, or to donate non-perishable foods and toiletries. There is a detailed financial needs list and grocery needs list available for those who are able to donate.

South Africa has significant levels of food inequality and hunger. Nearly a quarter of South Africans go to bed hungry each night, according to a South African National Health and Nutrition Examination Survey.

The lockdown makes the problems of food inequality and hunger worse and South Africans are keen to assist through donations. Earlier this week, Maverick Citizen reported that communities are desperate and struggling for food. The importance of supermarket chains and government collaborating to assist with feeding those in need cannot be understated.

Supermarket chains did not respond by the time this article was published. DM/MC