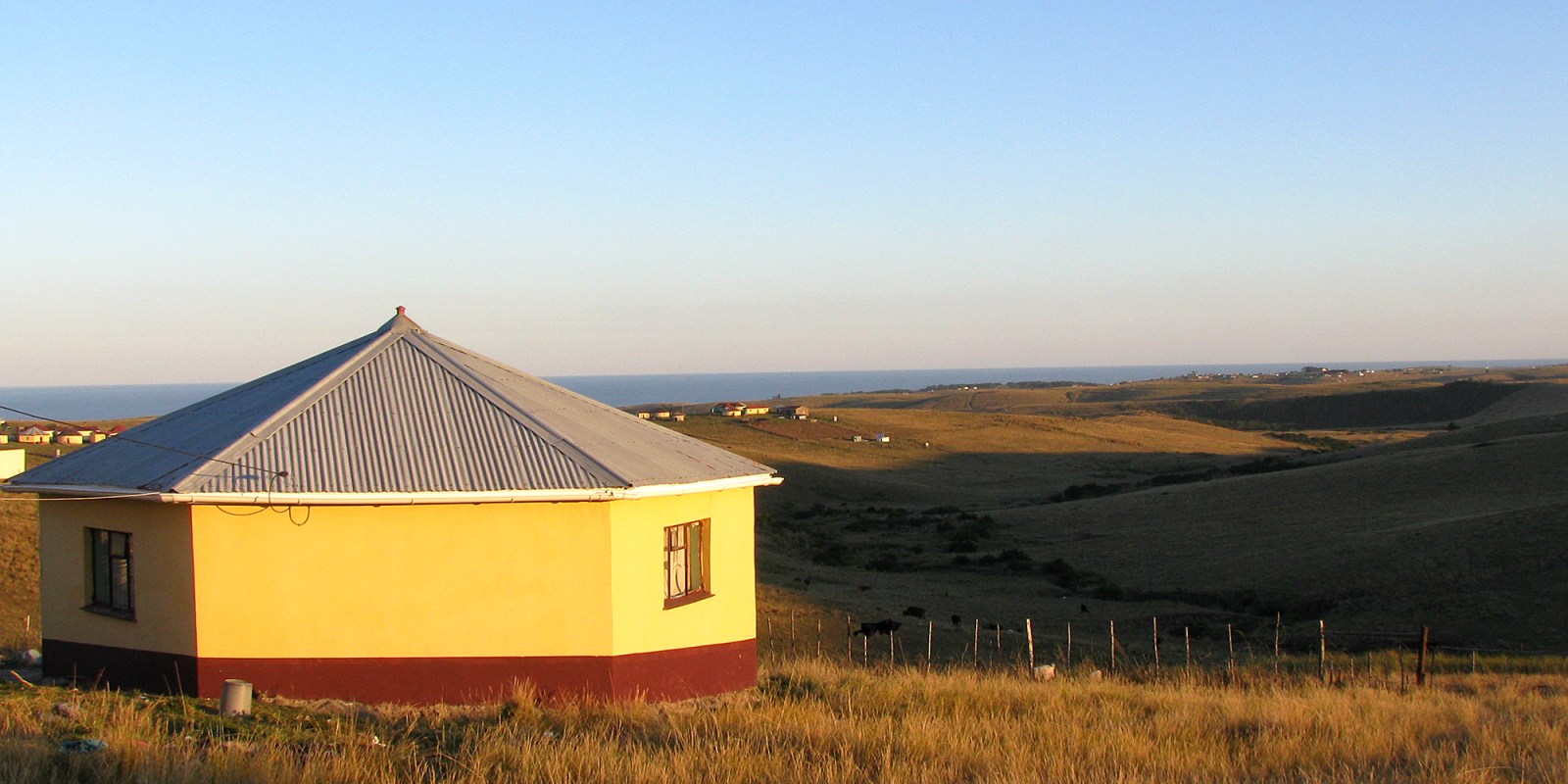 A house in Ngcizela on the Wild Coast. (Photo: Provided by Debby Potgieter)

Residents and organisations on the Eastern Cape’s Wild Coast are working together to prepare for an anticipated Covid-19 onslaught. Spotlight spoke to people from four villages.

When South Africa’s nationwide lockdown was implemented on 26 March, large swathes of the country came to a standstill as people stayed inside their homes. The once-bustling city centres of Cape Town, Johannesburg and Durban became veritable ghost towns as the streets and buildings quickly emptied of cars and people. However, there are different dynamics at play when it comes to locking down in rural areas.

Spotlight travelled to the Eastern Cape’s Wild Coast and found that residents and organisations are working closely together to be prepared in the event that the pandemic comes their way. However, it’s not always easy to follow the government’s restrictions.

‘Nobody is following the lockdown here at all’

Debby Potgieter, co-founder of the Qolora Education Centre, a non-profit company in Ngcizela, told Spotlight it seemed as if it was business as usual in the village, with locals relying on prayer to protect them from the virus.

“Nobody is following the lockdown here at all,” she said.

Potgieter said she spoke to a man a few days ago who had returned to the village from Cape Town to be with his family. On his way to the slaughtering of livestock, the man told Potgieter that the community was indeed in lockdown, but as a community rather than individually. The feeling was that if nobody new came into the area and nobody left, the community would be safe from the virus.

She said that many people from urban areas had returned to spend Easter in the village. “The whole village is still interacting,” she said. “The shebeens are closed but traditional gatherings are still going on.”

Getting the message to young people

“To be honest, people in the villages where I am staying don’t take it seriously,” said Phumzile Msaro, secretary of the Xhora Mouth Community Health Committee. Msaro said that funerals were still taking place, sometimes with more than 200 people in attendance. He claimed that church leaders were not abiding by the lockdown restrictions. However, some in Msaro’s community were trying to keep others informed. “The chief and the headman are working very hard to tell people and spread the word to the sub-headmen and all other traditional structures to make sure people stay informed,” he said.

Traditional leaders in Xhora Mouth are working with a local NGO, the Bulungula Incubator, to disseminate factual information about Covid-19 and the lockdown. “The biggest challenge we have now is transport. I can see taxis going up and down [to Elliotdale] because of the grants, and there’s a big chance of spreading the virus [this way],” said Msaro.

Elliotdale is the town nearest to Xhora Mouth, where one case of Covid-19 has already been confirmed. So far, this is reportedly the only case in the Amathole District. Msaro said that the village spaza shop was doing an excellent job ensuring customers maintained a safe distance between each other, while also offering a Jik (household bleach) solution as a hand sanitiser.

While traditional leaders and shop owners strive to inform and protect people, Msaro said young people had a different perspective. “You can see with the youngsters that they don’t take it seriously. But the elderly are taking it very seriously.”

Msaro added that since the lockdown, he hadn’t seen any police in his village. SAPS was approached for comment but hadn’t responded by the time of publication. “Law enforcement is really necessary now because at the end of the day, whatever comes, the government is responsible.”

Overlooking Xhora Mouth’s pristine coastline, the Bulungula Lodge in Nqileni, which usually serves as a backpackers lodge, has been converted into a safe house for some of the village’s elderly and vulnerable residents.

Working with the Bulungula Incubator, Dave Martin, founder of the lodge, moved quickly to secure the premises as well as another property to house and care for around 70 people.

“The only feasible thing we could see in a community like ours, where it was unlikely that social distancing would really work, was to create a safe place for those most at risk, being the elderly, particularly those with high blood pressure and diabetes, to keep them safe and isolated while the virus takes its course,” Martin told Spotlight.

On Thursday, 26 March, those most at risk because of their age and health were taken to the safe houses. There are ten staff members inside the lodge, plus two community healthcare workers for each location.

“Twice a week we allow stuff to be brought in, but there’s a very strict process. It all gets left at the gate and then we spray everything with bleach, leave it in the sun for an hour or two, and then spray it again, then [wait another] hour or two and then bring it in. That way we’re confident that nothing infected comes in,” said Martin.

Martin and the Bulungula team conducted extensive interviews before deciding who would be taken to a safe house. People were questioned about their travel history, mainly to determine whether they or anyone close to them had recently been to the city.

“We had to exclude a handful for being potentially at-risk people. The worst nightmare is if the virus came in with one of the [elders],” said Martin.

East of Nqileni, Johann Stadler, owner of Mdumbi Backpackers, started a community WhatsApp group to get information out about Covid-19. “We keep sharing information, and removing false information, and just letting people know clearly what the situation is. [We] also sent around quite a few homemade videos about what to do. Our headman made quite a few interesting ones about how to wash your hands,” said Stadler.

In the period leading up to the lockdown, Mdumbi Backpackers and an NPO called Transcape spoke to traditional leaders and elders about the virus and its ability to reach their community. Stadler has considered using the premises as an isolation ward if the situation calls for it. He has also looked at other community sites, including the empty Mankosi Clinic which is standing empty.

In Mpame, another of the Wild Coast’s quiet coastal villages, the founders of local NPC Educare Mpame told Spotlight they were frustrated with the way information about the lockdown and the pandemic was being communicated to the public. “When the President announced the lockdown on 23 March, we asked people to please listen to their radios to find out what is happening. Unfortunately, the speech was only in English and most people here do not speak the language,” said Tony Robertson, co-founder of Educare.

Robertson and his wife, Jean-Marie, arranged for groups of locals to come to Educare to listen to the speech with a translator. “On the last day before we closed Educare, Jean had meetings at both our facilities with the children and teachers, giving as much information as possible as to how to protect themselves. After the term ended, flyers were sent out to approximately 100 households,” said Robertson.

He said after the president’s speech announcing the lockdown, Educare arranged for small groups of people to watch the speech on a monitor with the help of a translator. Animated clips were also shown about the coronavirus as well as some clips in isiXhosa. “Unfortunately, not enough people attended,” he said. “That evening, we witnessed those same children, parents and grandparents attending a church gathering near us.”

The need for rural-centric communication

Rural Health Advocacy Project coordinator, Karessa Govender, says that communication challenges in Mpame were not unique. “Information is being put out there in different languages, but to what extent has the government tried to get that information to more remote areas? I think what this pandemic has really identified is the need for health communication messaging that is appropriate for context,” said Govender.

“This virus puts a spotlight on the state and how effectively it communicates. In rural areas, communication channels are not the same as in urban areas.”

Sizwe Kupelo, spokesperson for the Eastern Cape Health Department, said the province was working hard to “decongest” primary healthcare facilities and ensure sufficient stock of chronic medication. For the three most rural districts, Amathole, OR Tambo and Chris Hani, Kupelo said chronic medication was being issued for between two to six months at a time, depending on availability.

“I have received reports that client volumes have decreased significantly this week and we hope numbers will continue to drop as the lockdown progresses. External pick up points are also open so as to improve access to medication as per the national directive.”

“We do provide education on Covid-19,” he added.