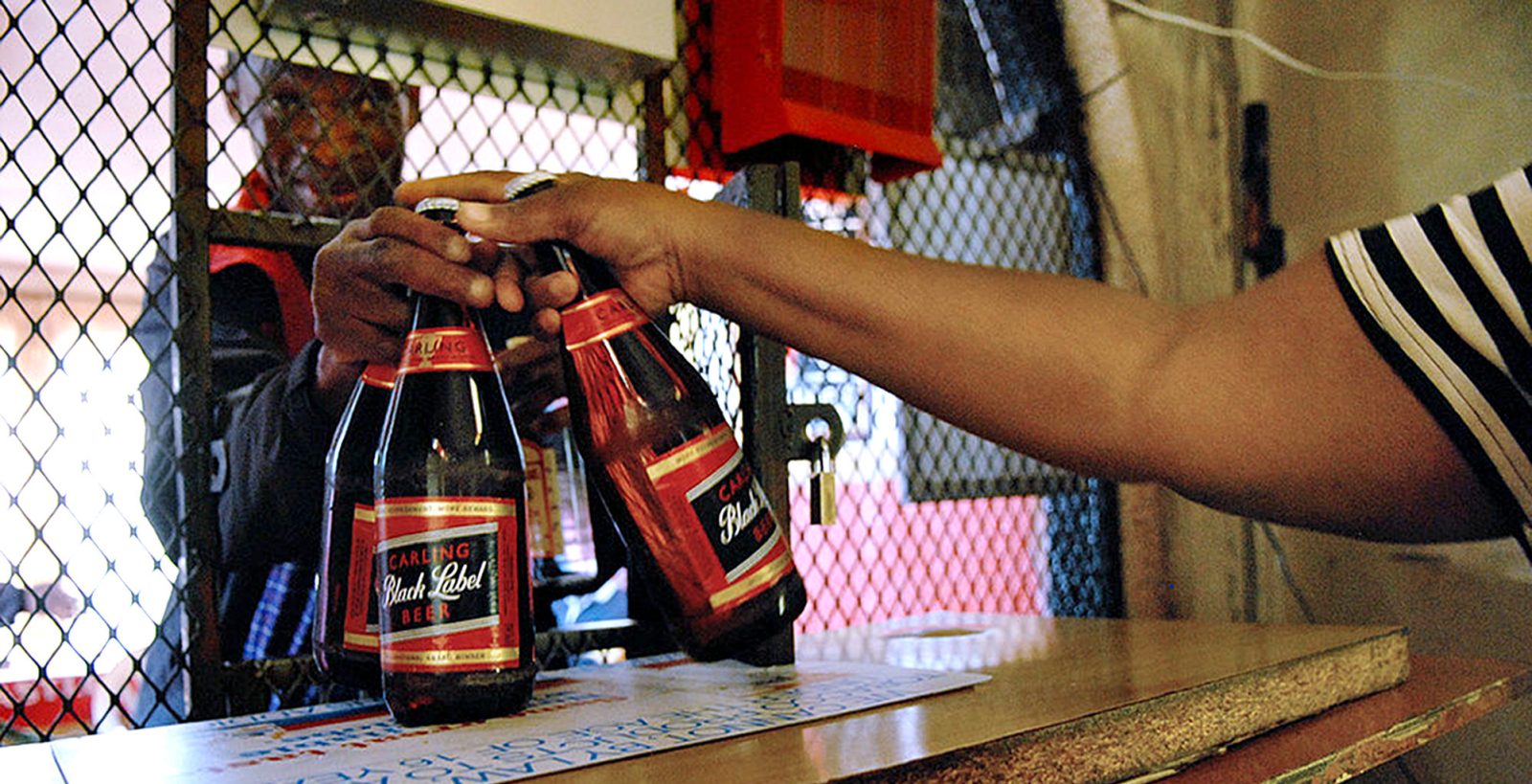 In the Eastern Cape, the illegal trade in liquor is booming, say residents. (Photo: Naashon Zalk / Bloomberg via Getty Images)

The suspension of alcohol sales during the national lockdown, aimed at curbing the spread of Coronavirus infections, has seen an almost immediate and significant drop in trauma cases for the province’s ambulance services. However, community leaders say that while pubs and shebeens might be closed, the market for illegal alcohol is thriving.

Emergency calls to state ambulances in the Eastern Cape have dropped by 40% since the lockdown started on 27 March, but community leaders insist the ban on the sale of alcohol has not stopped people from buying or drinking.

President Cyril Ramaphosa declared the coronavirus pandemic a national disaster earlier in March and ordered the country into lockdown. As part of the disaster regulations, the government banned all alcohol sales.

“The positive thing about the current lockdown is that there has been a reduction in trauma cases and deaths,” Kupelo said. “The emergency medical services, hospital casualty departments and forensic facilities are less busy. All districts reported a 40% reduction in calls,” he said.

An ambulance medic in the province described his shift on Saturday night, traditionally a very busy night: “Last night was very quiet. The cases we did have were medical. At one house everybody was wearing masks. I asked, why are you all wearing masks? They said President Ramaphosa told them they must do that.”

“The roads were very quiet,” he said.

On the morning of Sunday 5 April, Police Minister Bheki Cele welcomed the overall decrease in serious and violent crimes, attributing this mainly to the prohibition of the sale and transportation of liquor since the lockdown began.

Analysing the crime and comparing the first week of the lockdown to the same period in 2019, Minister Bheki Cele confirmed that murder, rape, assault and robberies dropped significantly during lockdown.

In Nelson Mandela Bay, the Eastern Cape’s biggest metro, the illegal trade in liquor is booming. Pastor Kenny Nonkonyana said there are taverns where the price of a bottle of vodka has doubled in the last week. A single beer now costs R40. Nonkonyana started his tavern Toyi-Toyi in 2015 with pop-up sermons at some of the Bay’s most popular shebeens.

Nonkonyana said from what he has seen in his own community in Zwide and in others in Nelson Mandela Bay, things are carrying on as usual. “People are not really complying with safe distance, and not leaving your house. You don’t really get an idea of the police and the defence force being everywhere,” he added.

“You still see people drinking. Prices are so high now. One beer for R40 and a bottle of gin or vodka for R300. Let me tell you, people are buying. People have broken into one of the shops that sold liquor. There is a level of desperation here,” he said.

Pastor Tobile Sonjica said people told him that they are driving as far as Jeffreys Bay to buy alcohol. “Many people are drunk. A lot of them are making their own homemade alcohol. That is another bomb waiting to explode,” he said.

A community leader in Port Elizabeth’s northern areas, Gary van Niekerk, said illegal alcohol sales were the order of the day. “The alcohol ban is not effective at all,” he said.

“I’ve had many people complain to me about illegal sales, and I’ve been given addresses. My personal opinion is that we’ll only see the effect of the ban on alcohol sales once the taverns run dry. I can’t imagine the breweries selling wholesale to the shebeens and taverns. They have too much to lose. I’m told that buying beer is a near impossibility, but you can still buy whisky and brandy,” he said.

“I also think the poorest of the poor are fighting addictions, especially alcohol most of all. I’m worried that we’ll see looting soon. It sounds far-fetched now, but let’s give it some time. Generally, I support the ban on alcohol, though. We saw what it looked like on the streets when the ban started. We can’t have that. The only compromise I can think of is limited quantities being sold, but that will almost be impossible to police,” said Van Niekerk.

“I think there is definitely a link with the number of trauma cases being down. People are not moving around so much. The fact that the army has been deployed in some areas also helps.”

A spokesperson for the Eastern Cape Liquor Board, Mgwebi Msiya, said they know of “a few cases” where the police have intervened and confiscated alcohol.

“We are still observing the trend before we make a determination in respect of cases of trauma and crime. But it is true so far that there have been very few cases of crime, road accidents and trauma since this lockdown. This could be linked to the closing down of liquor sales.  But we will be able to give our full view towards the end of the lockdown,” he said.

Professor Charles Parry, head of the Medical Research Council’s Alcohol, Tobacco and Other Drugs Research Unit, said it did not surprise him at all that there had been a reduction in trauma cases.

“I am sure the army and the police are very stretched and can’t be everywhere. Part of the reduction in trauma cases will be due to fewer people being on the road and fewer pedestrians,” he said.

“Certainly, another part will be due to the fact that people are not gathering in shebeens and other places to drink. We know that a lot of alcohol-related violence occurs in and around such establishments. Not only are people not mixing with others but there is no heavy episodic drinking going on either,” he added.

“People only have what they have purchased prior to the lockdown.  Some might drink it all up in the first week, but others are likely to ration what they have and drink it over the next month as many will have a reduced income during the lockdown. Inevitably this will mean that they will be drinking less.

“International research shows that a drop in alcohol consumption is inevitably linked to a reduction in alcohol-related harm,” he said. DM/MC