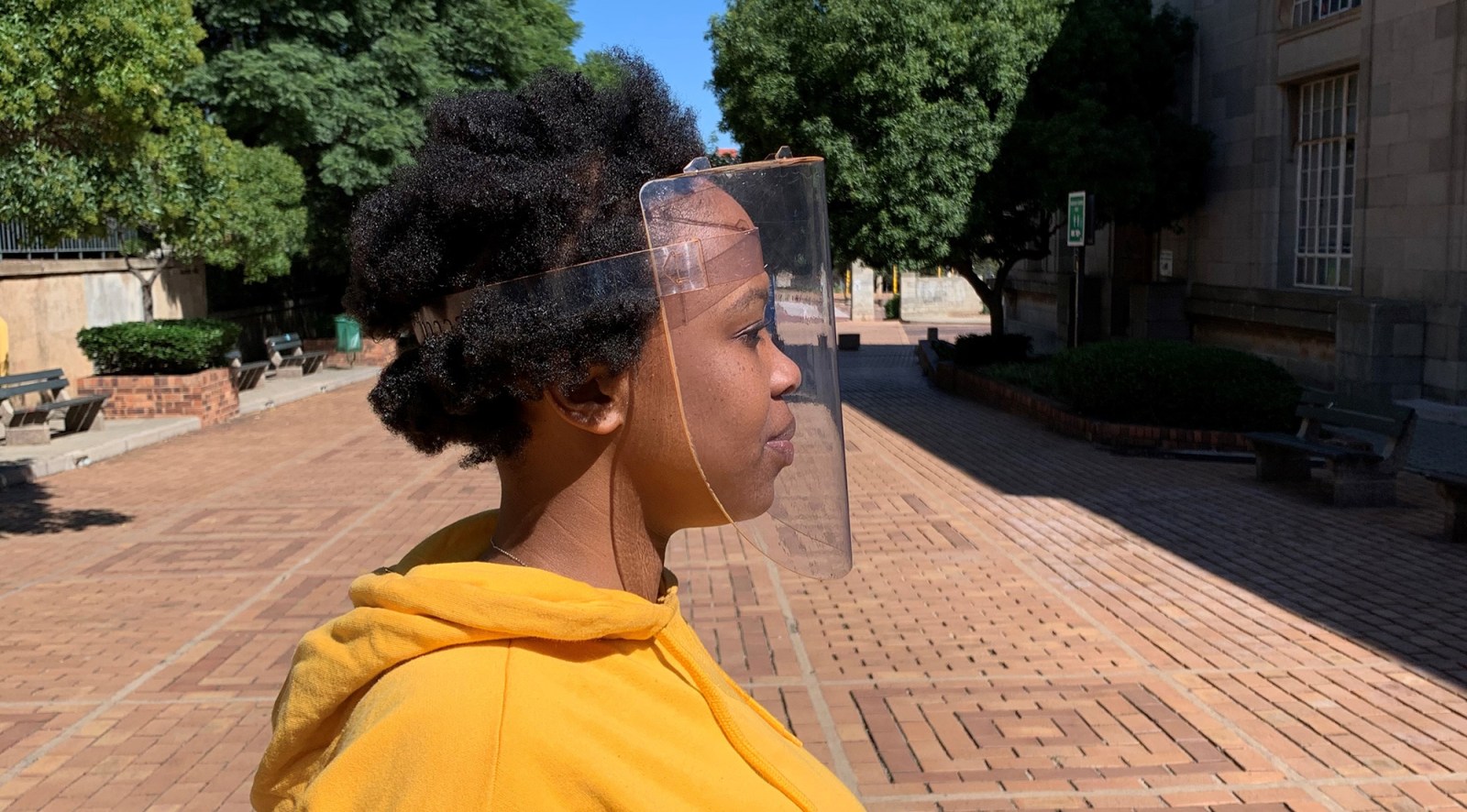 Wits University is anticipating production of about 200 to 500 face shields a day to help meet the growing demand. (Photo: supplied)

As the coronavirus continues to spread, healthcare systems across the globe are feeling the pinch of protective gear shortages. In South Africa, universities, tech startups and innovation hubs are pulling together efforts to manufacture the equipment.

With almost 1.5 million global coronavirus infections, the supply chain for personal protective equipment (PPE) is under immense pressure as shortages creep in.

On March 3, the World Health Organisation (WHO) asked governments around the world to increase the production of PPE by at least 40% to meet the rising global demand. The call came exactly two days before South Africa reported its first infection.

Since then, as of 7 April, the country has recorded 1,749 deaths, 45 recoveries, and 11 deaths. And with only three to four weeks of PPE supplies left, universities, tech-startups, and innovation hubs are moving fast to alleviate the pressure.

Wits University is anticipating production of about 200 to 500 face shields a day to help meet the growing demand.

“The Wits team [has] produced 140 face shields and distributed 120 to the Wits Donald Gordon Medical Centre and another 20 to the Wits Protection Services staff. An additional 300 face shields have been produced to date, of which 200 will be donated to Charlotte Maxeke Johannesburg Academic Hospital and 100 to Rahima Moosa Mother and Child Hospital,” the university said in a statement.

Just a few kilometres away from Wits, the University of Johannesburg is also producing face shields.

“We’ve distributed about 75 face shields to various healthcare workers. And we are working on mobilising the 3D Makerspace community in Johannesburg to procure the material needed to manufacture these shields so that we can be able to manufacture a lot more,” said Professor Maria Frahm-Arp, the University of Johannesburg’s executive director of Library and Information Centre.

Because the virus spreads through contaminated surfaces and respiratory droplets discharged when coughing or sneezing, protective gear that covers the mouth, face, and eyes are required by healthcare workers.

Frahm-Arp told Daily Maverick that the shields are used in conjunction with surgical masks and neither one should replace the other.

In the Free State, the Central University of Technology (CUT) is also focusing its efforts to manufacture various PPE for healthcare staff in the province. The university aims to produce about 200 mask units that will be distributed across the province.

The masks manufactured by CUT consist of two parts: “namely, the main housing, and the soft interface that provides the seal. Both parts can be sterilised by autoclaving. The mask forms a tight seal around the clinician’s mouth and nose, allowing for N95 (or similar) filters to be attached,” the university’s statement noted.

Professor Henk de Jager, vice-chancellor of the university, said they are manufacturing an aluminium mould insert which will capacitate them to produce over 10,000 attachable masks.

WHO modelling estimates that 89 million medical masks are required for the Covid-19 response each month, as well as 76 million examination gloves and 1.6 million goggles.

The pandemic has forced governments around the world to use existing technologies and encourage tech innovations that can help fight and contain the spread of the virus. Many tech companies have repurposed their existing tech to offer Covid-19 specific innovative solutions.

“Companies are starting to pivot or redesign how they do their work to live up to demands emanating from the pandemic. And that’s an innovation. They are providing value to surviving,” said Wits University’s Tshimologong Innovation Precinct CEO, Lesley Williams.

GoMetro, a South African transport technology start-up, is one such company repurposing its local public transport app and tech-system to support needs arising from the pandemic.

Justin Coetzee, the tech company’s CEO, informed Daily Maverick that they had reached out to 300 hospitals across the country in the past week to offer their transport technology services for staff members.

Similarly to Uber, GoMetro offers an app-based transport service to various corporates in the country, with the option of utilising just the app or alternatively a full transport service including vehicles, drivers and the planning system.

“Using GoMetro software, a hospital manager can set up a carefully planned and coordinated transport service that is customised for their operations and conditions and protects their healthcare and other essential services workers from the high risk of exposure in public transport to get to work,” Coetzee said.

The transport service company has since developed a sanitising protocol that enforces sanitisation of every vehicle after every trip.

“The protocol uses fogging technology to ensure that disinfectant agents cover the full interior of a vehicle. All drivers have been trained in the sanitisation protocols required by the government regulations governing transport, as well as adhering to passenger load limitations that make essential physical distancing possible. GoMetro Fleet drivers have no contact with passengers, do not handle cash and are equipped with the relevant PPE,” a statement from GoMetro reads.

The company manages 1,500 vehicles in Gauteng, 600 in Cape Town and 200 in KwaZulu-Natal. Coetzee said they are in the process of identifying some in Eastern Cape.

Coetzee said their analysis showed that public hospitals will be most affected by staff transport shortages if regulations change and public transport ceases to operate temporarily.

“Private hospitals are already ‘stockpiling’ transport. The ones we have contacted generally want the vehicles on sight all the time, knowing that they have them 24/7. From the responses we’ve had, public hospitals do not realise the challenge that lies ahead as and when the pandemic spreads largely,” he told Daily Maverick.

The Shoprite Group adopted a similar approach with its repurposing of the Money Market service by introducing a virtual grocery voucher that can be sent via SMS.

The vouchers can be bought from the Computicket website, and sent to the recipient’s number. Although the money market service is still in operation during the lockdown, the food retailer said with the country’s noticeable unbanked population unable to earn money, these vouchers can help with food transfer funds.

CUT has manufactured 115 units of hand sanitisers that will be distributed to the Free State provincial health department, Vice-Chancellor de Jager said.

The university has also completed the development of oxygen connectors and splitters, which will cost the university R80,000 to manufacture for the entire province’s health care system.

Wits’ engineering faculty plans to develop other medical equipment such as respiratory devices and medical masks with filters made out of vacuum cleaner bags. DM