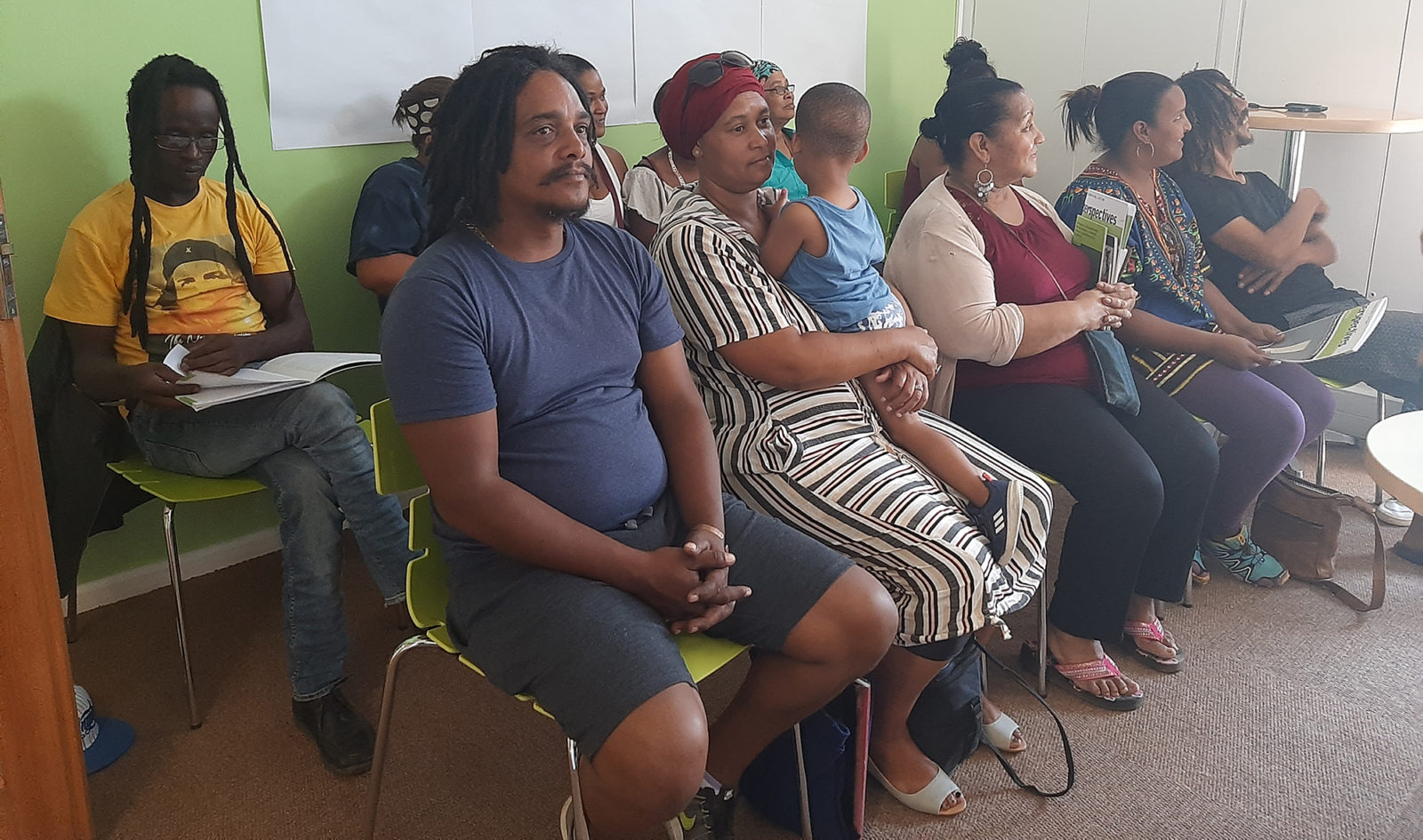 Farmers and community members from the Philippi Horticultural Area, came to support the Campaign. Leader Nazeer Sonday hopes the land previously earmarked for development can now be given to small-scale farmers. 18 February 2020. (Photo: Sandisiwe Shoba)

The court battle in October 2019 saw a group of small-scale farmers from the Philippi Horticultural area take on the City, developers and government in a bid to protect the productive farming area from urban development and in turn, buffer Cape Town from the effects of the climate crisis.

This was during a press conference held on Tuesday at the Heinrich Böll Stiftung offices in Cape Town, where members of the PHA Campaign and small-scale farmers were present.

Judge Kate Savage ruled on Monday that the construction of Oakland City had been suspended. The City’s 2011 decision to rezone and subdivide the “Oakland land” from horticultural use to urban development was also suspended and the environmental authorisations issued, allowing the development to take place, must be reviewed.

“What the judge is saying is that (they’re) going to require that municipalities look at the big picture in future, and that big picture definitely includes climate change,” said representative for the PHA Campaign Susanna Coleman.

Led by Nazeer Sonday, a small-scale farmer, the PHA Food and Farming Campaign hauled the City of Cape Town, developers, the province and various government ministries to court to oppose the development of the land.

Oakland City, comprising 30,000 housing units, a private school, malls and other urban development, was set to be built on close to 500ha of land in Schaapkraal, an area that the campaign argued formed part of the PHA.

Coleman was pleased that Judge Savage recognised the PHA as the “Guardian of the Cape Flats Aquifer”.

“She saw the importance of the PHA as the recharge zone for the aquifer and the role that the Cape Flats aquifer is going to play for a water-scarce city,” Coleman said.

The campaign argues that the aquifer is a vital source of potable water for the city.

“The western side of the country is getting drier and drier, and so the importance of drought-proof farmland is becoming more and more imperative,” said Coleman.

Further arguments are that urban encroachment will result in the pollution of the aquifer, an already plausible threat with the pile-up of illegally dumped rubble already compromising the water quality and blocking pathways for water flow.

During court proceedings in October 2019, developers accused campaigners of being “anti-development” but Sonday affirmed this was untrue — the campaign was against the PHA being used for a housing development.

“Our area is not a housing area, our area is a farming area and we want to keep it that way.”

Sonday says the PHA is crucial for food security in the Western Cape, explaining that recent studies show the area produces roughly 200,000 tonnes of vegetables a year to supply supermarkets and the informal sector.

“Eighty percent of the carrots that are eaten in the city come from the PHA,” said Coleman.

The PHA supports 6,000 workers and a further 30,000 indirect jobs are supplied by the area, said Sonday.

He believes that because of this ruling, they can go ahead with plans to put 500 farmers on the land previously earmarked for Oakland City.

“We can then generate a lot more employment,” he said.

Glyn Williams, an attorney and volunteer for the campaign, claims that Wentzel Oaker, the land developer for Oakland City, used workers’ pension funds to finance the now-suspended development.

“The development as conceptualised was illegal and continues to be illegal,” he said.

A press statement issued by the PHA Campaign on 17 February alleged that Oaker “squandered R47-million” of workers’ pension fund money, while Williams said Oaker used roughly R36-million of those funds to buy the 22 farms on which Oakland City would have been built.

The campaign has spent 10 years trying to halt the development, which they estimate would be roughly 10 times the size of Century City.

For years, the PHA has been a battle zone. The area has consistently been eyed as an area for housing developments and other land speculation, while farmers and other interest groups have opposed urban encroachment to protect the fertile farmland, located on the Cape Flats Aquifer, a vital source of groundwater which makes year-round farming on the PHA possible.

Over time, the area has lost roughly 900ha of land. Portions of this include the Schaapkraal smallholdings area, a strip of land along the western boundary of the Philippi Horticultural Area, the Weltevreden Wedge, which runs all the way along the area’s eastern border, the Lansdowne Industrial area and Oakland Land of close to 500ha.

Developers had argued in 2019 that land set aside for Oakland City didn’t form part of the PHA and that the boundaries of the PHA were unclear. Part of the campaign’s court application was to have the about 3,000ha area (not just Oakland City) declared “agricultural land” as defined in the Subdivision of Agricultural Land Act 70 of 1970.

This application was denied in the ruling, which stated:

“The declaratory relief sought, to the extent that it were to be limited to the Oakland land, cannot be granted.”

The campaign was disappointed that national Minister of Agriculture, Land Reform and Rural Development Thoko Didiza had kept her distance from the PHA debacle.

“(She) has done nothing to help us protect the PHA farmlands or defend over 30,000 farming jobs and livelihoods,” the campaign statement read.

The fight for PHA was, however, supported by some official bodies. The Western Cape provincial cabinet and the City of Cape Town had resolved to abide by the ruling and not appeal against it, according to minutes from a provincial cabinet meeting in 2018.

Glenda Herman, who’s lived in the PHA for 25 years, was “relieved” about the judgment.

“It gives a sense of security that a bulldozer won’t just come in, in the early hours of the morning, and evict you.”

Tazlin Maasdorp said it was a win for “future generations”.

“We now know we belong somewhere. We can establish better roots for our children to be farmers and know that a farmer isn’t necessarily a white person,” said Maasdorp.

The campaign is back in court on 18 March over another proposed 100ha development by UVest properties. The company’s rezoning application was denied in 2018 and the developer has taken the PHA Campaign and the City of Cape Town to court to review the decision. DM