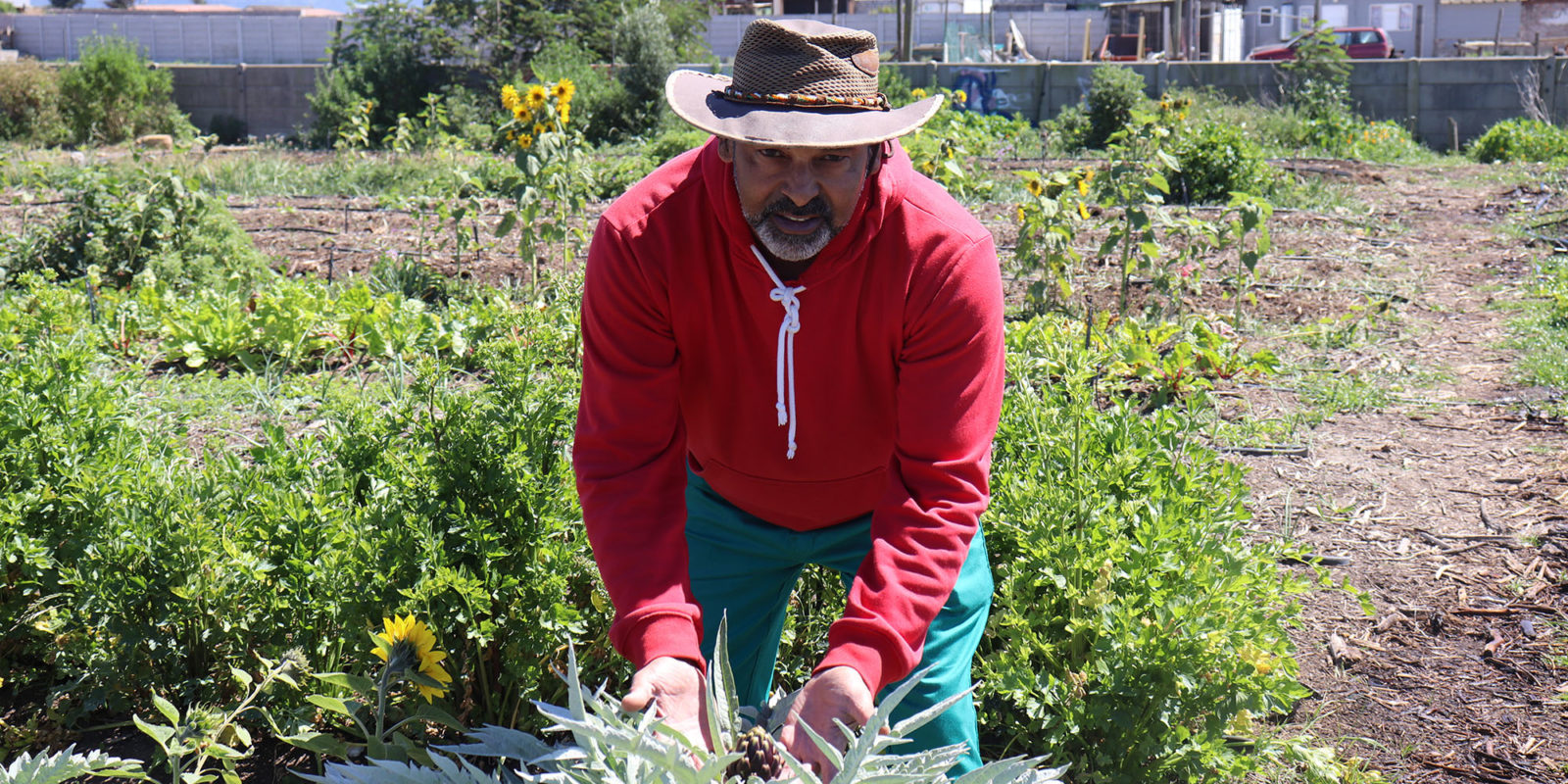 Nazeer Sonday’s 1ha piece of land in the Philippi Horticulture Area grows a variety of crops all year round thanks to the Cape Flats Aquifer directly below it, ensuring his land is drought proof. (Photo: Tessa Knight)

After years of campaigning, the Philippi Horticultural Area Food and Farming Campaign will finally go up against the city, the province and a number of developers in court to fight for the protection and preservation of the most productive horticulture area by hectare in South Africa.

Just twenty minutes from the centre of Cape Town lies the Philippi Horticulture Area (PHA), a piece of land home to hundreds of small-scale farmers who provide the city with up to 80% of its fresh vegetables. It is green, fertile and unaffected by the drought.

Two years after Daily Maverick conducted an investigation to try to understand why the City of Cape Town was adamant to pave over its most productive piece of land, the only thing that has changed are the new lines creasing farmer and founder of the PHA Food and Farming Campaign, Nazeer Sonday’s face.

He has every right to be afraid. On Tuesday, Sonday will go up against the city, the province and a slew of developers armed with just his research and experience, and supported by a single advocate in an attempt to protect the PHA.

The court case has been many years in the making.

For nearly a decade the PHA Food and Farming Campaign, started by Sonday and backed by 33 civil society organisations, has been fighting the proposed development of over 1,000ha of prime land located within the horticulture area.

Tuesday’s court case will see the PHA Campaign arguing that city decisions to rezone pieces of the PHA from horticulture use to urban development should be reviewed and set aside. The proposed developments for the land include a private school, a private prison, shopping malls and thousands of housing units.

In their responding affidavits, the city and the province have argued that the PHA is a loosely defined term that does not refer to an officially demarcated area.

Much of the argument to develop the land revolved around a need for housing to be built on available land.

Sonday makes his living off of a piece of land that, although not scheduled for development, will be directly impacted by planned developments in the area that will pollute the Cape Flats aquifer and disturb the delicate ecosystem that protected the PHA from Cape Town’s drought.

When Sonday speaks about the area, it is clear how important it is to not only his family but the families of other farmers and land claimants in the area.

Sonday worries that if the PHA is destroyed, the people who live and work on it will not move into the proposed housing units, but into nearby townships.

“And then what?” Sonday asked. “All I can imagine is we will have more military in our townships to police our despair.”

The primary difference between the PHA and other farmland is its location above the Cape Flats Aquifer (CFA). According to Sonday, the Cape Flats aquifer, which spans hundreds of square kilometres from False Bay to Tygerberg Hills to Milnerton, is the reason farms exist inside the city limits.

“We keep the aquifer alive and it keeps us and our farms alive. But they want to kill it, and they’ll kill us,” said Sonday.

Over the years the development of houses and industry on top of the aquifer have left it increasingly polluted. Sonday is right in his declaration that the PHA keeps the aquifer alive: it acts as a natural recharge zone and maintains the integrity of the entire aquifer.

“The aquifer is the reason we survived the drought. We weren’t impacted by the drought at all. In fact, when everyone else struggled to grow we were producing more than ever,” said Sonday.

Much of the city’s vegetables and flowers come from Philippi, although Sonday and farmers like him are not allowed to brand their produce, so many people do not know the carrots and celery they buy from up-market stores comes from just down the road.

“People don’t know that we exist here, that we’ve been here for years providing them with food. They just don’t know.”

But over the years the PHA Food and Farming Campaign have raised awareness and garnered support from all walks of life, “from Constantia to Khayelitsha”.

Sonday wants people to know that, when the city says new developments need to be built on large tracts of land in the ever-shrinking PHA, it will make thousands of people food insecure, destroy thousands of jobs as well as ruin the area’s largest surviving aquifer.

“Developers want to build a city here, and the irony of this development is it will destroy six thousand lives. Thirty thousand livelihoods depend on these farms, including mine.

Ten years ago 201ha of land were removed from the PHA – the Weltevreden Wedge – to be used for low-income housing. “They haven’t built one house,” said Sonday.

When Daily Maverick travelled to Sonday’s farm for an interview, the workers watering the field and shovelling organic fertiliser were all women, but that does not make his farm unique: many of the people working on farms in the PHA are unskilled women.

One of Sonday’s workers, 47-year-old Linda Matthews, told Daily Maverick that she loves working with plants, and is worried she won’t have a job next week.

Over the years the PHA Campaign has won small victories here and there, primarily heritage and rezoning appeals, but this will be their first time appearing in court. Sonday told Daily Maverickhe has to have faith and believe the PHA Campaign will win the case, because there is no other option for him and thousands of people like him.

“I’m scared. A lot is at stake for me. If we lose the court case costs will be held against me, and this is the only thing I have in my life, this property and this land. I will lose it. And I will be removed from this area once again. The first time our family was removed in 1973 under the Group Areas Act. So this will be the second time I’ll be removed, only now it’s a democratic South Africa,” Sonday told Daily Maverick.

In a passionate letter to Cape Town Mayor Dan Plato, published in the Cape Argus, Sonday reminds Plato that there are many other available pieces of land ready for development.

Although city officials have cautioned the impact developing the PHA will have on the surrounding environment, the housing department has argued that gap and subsidised housing should be at the top of the city’s priority list. The current housing backlog is extreme, with many people in areas around the PHA struggling to find appropriate housing.

“The PHA doesn’t have any infrastructure. When they build here they will have to build sewer lines, everything. And the city has a policy of densification, but they want to build here. It just doesn’t make logical sense, none of it makes sense.”

On Tuesday, Judge Kate Savage will have to make sense of thousands of pages of affidavits over two consecutive days in court. DM

In 2009 a full council meeting opted to protect and conserve the PHA. In 2012, then mayor Patricia de Lille and her council members met to decide if they should excise 281ha from the PHA. They were faced with reports, conducted by city officials, stressing that should the PHA be developed the CFA would suffer. In the meeting, De Lille called for further investigation into how the PHA could impact the city’s food security.

During Daily Maverick’s previous investigation it was discovered that just six months after De Lille called for more information, a seven-page report found its way to the executive mayor. It called for development to proceed as soon as possible to mitigate housing needs.

In January 2014, then minister of the Provincial Department of Environmental and Development Planning, Anton Bredell, stopped the development. Despite provincial intervention, the ball was in the city’s court due to land planning laws. They excised the area, but development has not taken place due to rezoning issues.

As for the other piece of land, Bredell chose to excise that land despite then minister of Agriculture Lulama Xingwana refusing a request to rezone. DM