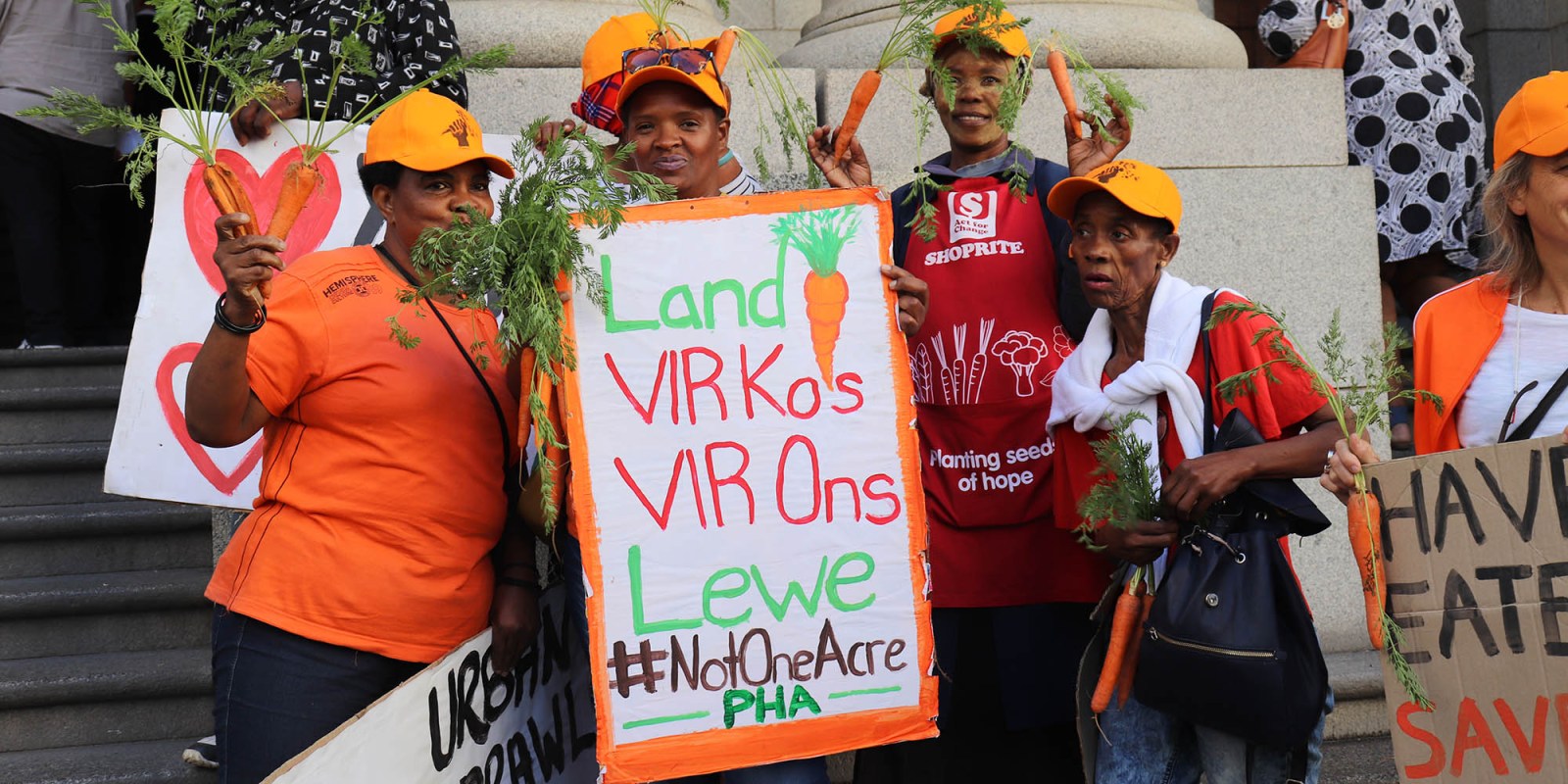 The first of two days’ litigation between the City of Cape Town, the province and the Philippi Horticultural Area Food and Farming Campaign, left campaigners furious when the spokesperson for the MEC for Environmental Affairs and Development Planning tried to tell the media the province would preserve the area.

The first court case between the Philippi Horticultural Area (PHA) Food and Farming Campaign, campaign chairperson Nazeer Sonday and 13 respondents including national and local ministers, the City of Cape Town and MECs, took place on Tuesday.

On the court steps, campaigners, who referred to themselves as “carrot comrades”, snacked on carrots brought from local farms and held signs saying “Have you eaten today? Save the PHA” next to a basket of fresh produce.

The case concerns 482.12ha on the south-eastern corner of the Philippi Horticultural Area, set to be converted into Oakland City by land developer Wentzel Oaker. Campaigners say the City and the province want to pave over the Philippi Horticultural Area, and that allowing the development of Oakland City will lead to further destruction of the area.

But according to James-Brent Styan, spokesperson for the MEC of Environmental Affairs and Development Planning Anton Bredell, “the province has never wanted to ‘pave over’ the Philippi Horticultural Area at all”.

Sonday, who will be liable for costs and is likely to lose his farm if the court case is lost, told Daily Maverick the Philippi Horticultural Area campaign had been working for the past 10 years to protect the area from developers and “lawless politicians”.

In 2009, a meeting of the city council decided to protect and preserve the Philippi Horticultural Area, located just 20 minutes outside Cape Town’s city centre.

Despite recommendations that the Philippi Horticultural Area be protected, on 27 May 2011 Bredell excised Oaker’s land from the area. According to the applicant’s advocate Murray Bridgeman, it is this 2011 decision that is “the rotten peg on which the rest of the decisions hang”.

It is this decision that the Philippi Horticultural Area campaign and Sonday want nullified.

The decision shifted the urban edge, meaning the city area was extended into the urban area of the Philippi Horticultural Area, allowing for Oaker’s land to be developed.

According to Styan, who was present at Tuesday’s court case, Bredell considered all relevant factors to ensure that the proposed development would not “unreasonably deprive the area and the affected citizens of a valuable food production source”.

His presence outside the court drew the ire of Philippi Horticultural Area campaigners, who questioned why Bredell’s spokesperson attended the court case when, they allege, the MEC had said little other than “the issue is sub judice” in the past.

Styan said the province’s vision “has always been that the PHA is an area that must be protected […] for all who work, live, invest and visit there”.

Susanna Coleman, a representative of the Philippi Horticultural Area campaign, told Daily Maverick that there is an economic driver for moving the urban edge and changing land from rural to urban designations.

“Rural land is far cheaper per hectare. Turn it into urban, developmental land and suddenly it’s worth a lot more.”

In May 2016, plans continued to move forward as environmental authorisation was granted for mixed-use development of the area. It was decided that any issues could be mitigated through an environmental management plan.

This decision was appealed against, on grounds that it did consider the environmental and socio-economic impacts of development on the Philippi Horticultural Area, according to Bridgeman.

The respondents argued that Oaker’s land was not being used. In a statement issued by Mayoral Committee Member for Spatial Planning and Environment Marian Nieuwoudt, “photographic evidence exists that since at least 1945 this land has not been used for farming”.

But the applicants argue that the land is unused because the developers have not allowed it to be farmed.

At 60 years old, Anna Joanna Jacobs wants to farm wherever she can.

“I would just like some more land to farm. I love farming, it’s what I grew up doing. Now I have a small garden to grow some few vegetables and fruits, and we got electricity recently, but life is still hard,” Jacobs told Daily Maverick.

Jacobs said she was confident Judge Kate Savage will rule in their favour.