Xenophobia explained: ‘A failure of SA government and leaders’ 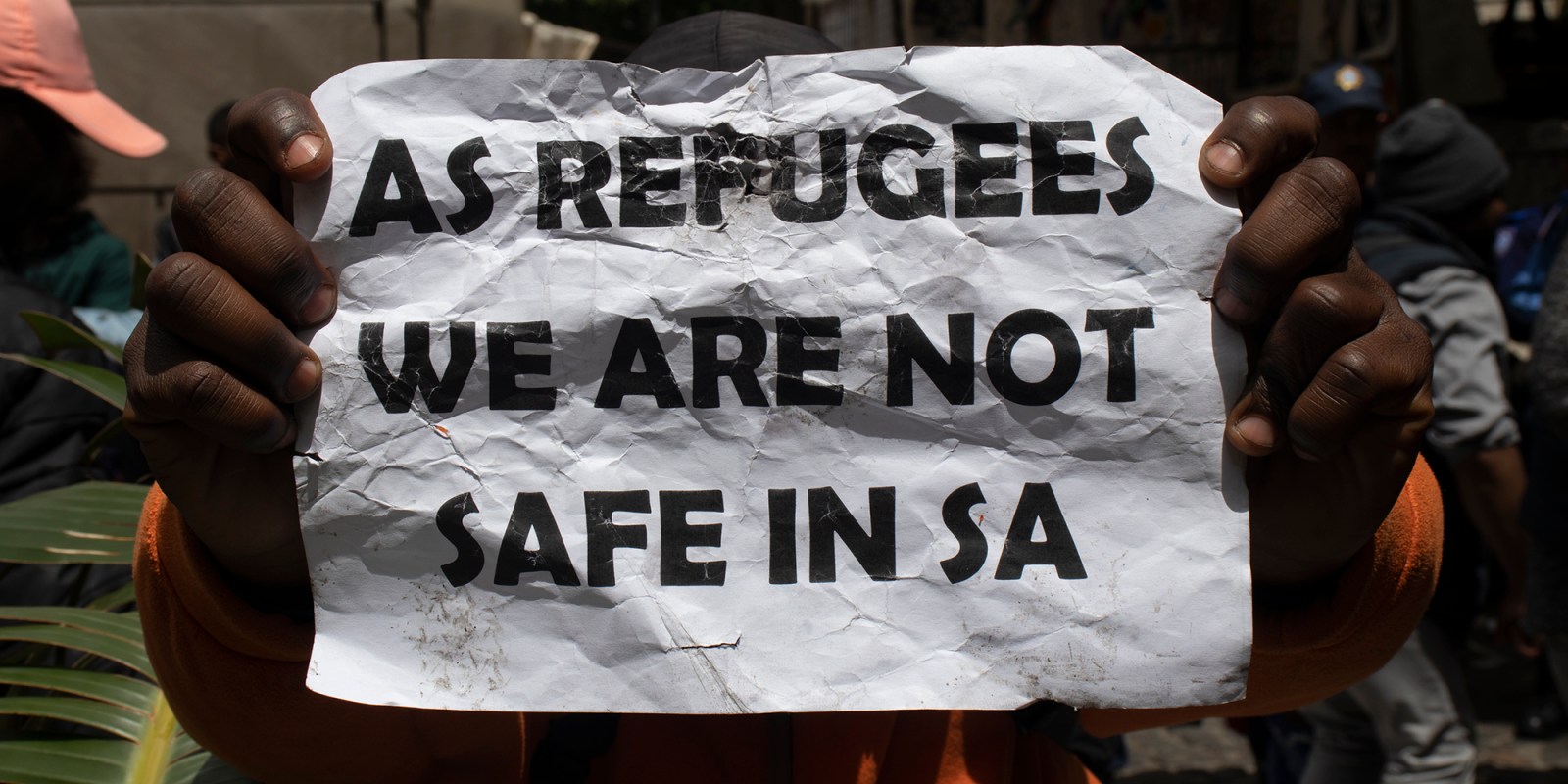 A foreign national displays a sign at a protest in Greenmarket Square, Cape Town, before law enforcement officials evicted occupiers at the UNHCR offices on 30 October 2019. (Photo: Aisha Abdool Karim)

A Cape Town conference on xenophobic violence in South Africa — attended by Bongani Bongo, chairperson of the parliamentary portfolio committee on Home Affairs — did not mention the about 300 refugees who have taken refuge in a church within walking distance of the conference venue.

A round table discussion on xenophobic violence in South Africa, hosted by Africa Unite and Human Rights Watch and attended by the parliamentary portfolio committee on home affairs chairperson Bongani Bongo, made no mention of the current refugee crisis taking place a stone’s throw from the venue.

Instead, Bongo told representatives from civil society, legal centres and the public that the crisis of xenophobia in South Africa cannot be solved by playing the blame game. He called on all South Africans to tackle the issue of xenophobia as a community.

“The problem of migration is not a problem that started in 2008. If you read the Bible, for those that are Christians, there is a huge thing of migration even then,” said Bongo.

Later, an audience member highlighted the fact that a Member of Parliament referring to migration as a “problem” is in and of itself part of the problem. Government leaders have in the past come under fire for inciting xenophobic violence.

IN 2018, then City of Johannesburg Mayor Herman Mashaba was accused of being xenophobic for stating he would not build houses for foreign nationals, and in April government gave assurances that Deputy Police Minister Bongani Mkongi would be forced to retract his statement that it was “dangerous that a South African city was “80% foreign”. As recently as October 2019, Health Minister Zweli Mkhize said the reason there are limited funds to address the demand for health services in the country is due to the continuous rise of immigration and the burden of disease.

A little over five minutes walk from the location of the talk and from Parliament, where Bongo spends most of his days, approximately 300 refugees were camped outside the United Nations Human Rights Council (UNHRC) offices for nearly a month before being removed by police last week. Their demands? Relocation. They no longer want to live in a country where they are persecuted for being different.

The situation is similar across the country, in Pretoria, where two homeowners associations have approached the high court to resolve who is responsible for removing hundreds of refugees who are camping in an upmarket suburb.

Throughout the two-hour roundtable discussion, none of the panellists addressed the most recent spate of violence against foreign nationals.

Haja Zainab Hawa Bangura, who served as the United Nations Special Representative on Sexual Violence in Conflict from 2012-2017, called out Bongo for making excuses for xenophobia. The Sierra Leonean activist passionately reminded the audience that in order to deal with xenophobia, the government must take accountability and ensure justice is maintained.

“Xenophobia is hatred, period. I think it is unacceptable — what we are talking here is not about the biblical history of migration, it is about the failure of the South African government and leaders to deal with this issue,” said Bangura.

Sherylle Dass, regional director for the Legal Resource Centre (LRC) agreed that the problem is not migrants, refugees or foreign nationals, it lies with the system of documentation.

In response to Bongo’s comment that South Africa has “porous borders” that allow foreign nationals and migrants to come and go without much regulation, Dass said:

“The system is broken. The problem is not porous borders, you can build a Trump wall and people will still come.”

Whether South Africa’s borders make entering the country easy or not, staying in South Africa as a documented refugee or foreign national is not a simple task.

There are only a handful of refugee centres scattered throughout the country’s major cities, and even fewer organisations that offer legal services to asylum seekers and refugees. The Cape Town refugee reception office has been closed since 2012, and despite the Supreme Court of Appeals ordering the Department of Home Affairs to reopen the centre by March 2018, it remains closed.

Speaking about the xenophobia crisis that gripped South Africa in 2008, where more than 60 foreign nationals died, Bongo said there had been an influx of migrants from countries such as Mozambique and Zimbabwe at the time.

The committee chairperson said just as the xenophobic attacks peaked, South Africa and the rest of the world were in the throes of a massive recession.

“We were overwhelmed by everyone wanting to come here. So much so that people did not want to get documentation,” said Bongo. “Anyone who comes here for economic activity will then abuse the laws for refugees and asylum seekers when they are here for other things.”

Bongo used the example of migrants who come to South Africa and set up tuck shops in township communities. These migrants, he argued, are undocumented and do not pay tax.

But Dass claimed that the majority of migrants do not want to live in the country without documentation or be considered illegal. She said most refugees want to assimilate, but bureaucratic hoops get in the way.

She emphasised that it was not likely a refugee living in Cape Town would travel to a refugee centre in Pretoria or Port Elizabeth to renew their permit, which can require renewal every three months. Some refugees are also fined for late renewal. DM