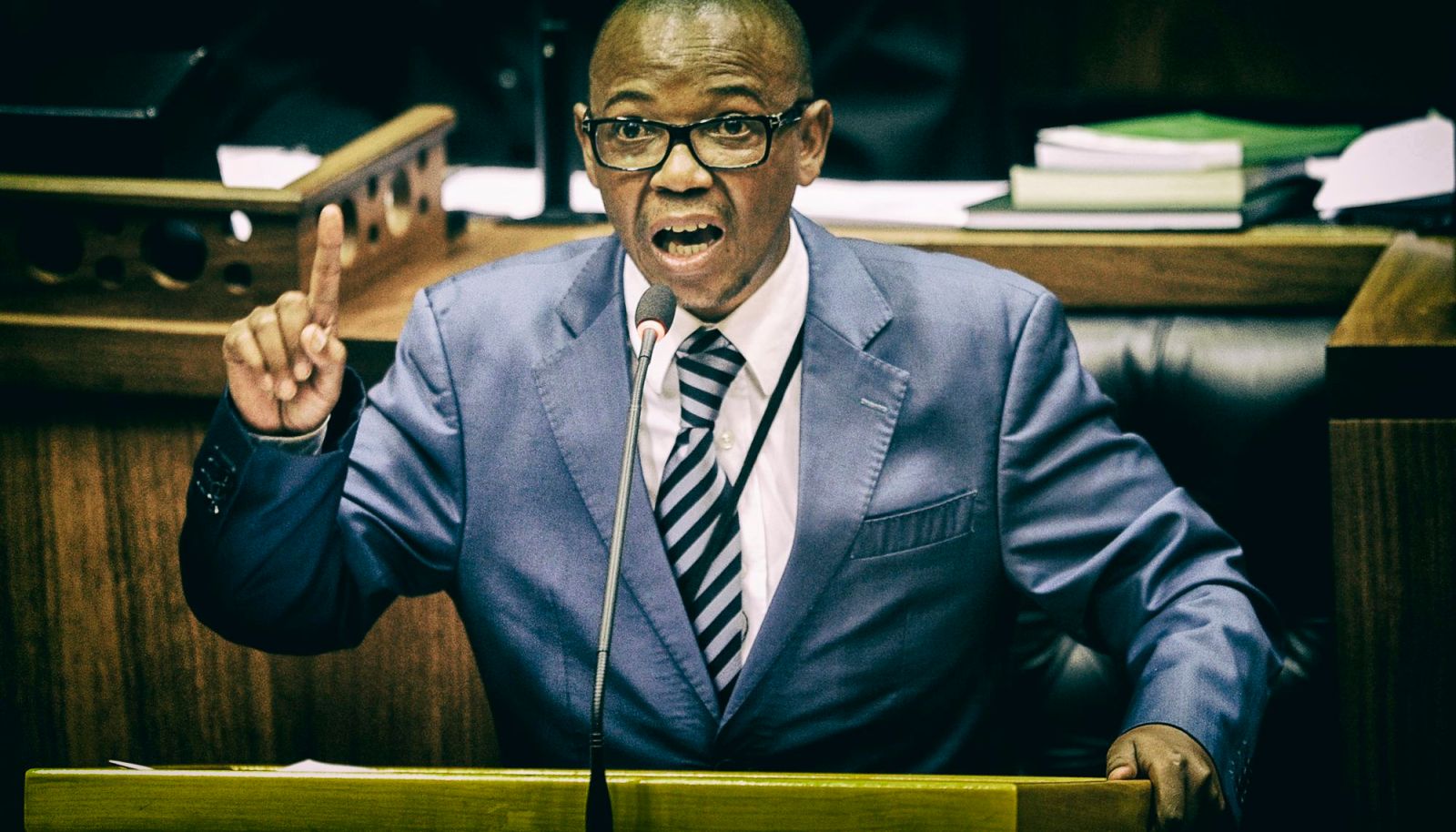 The government has reportedly assured African ambassadors that Deputy Police Minister Bongani Mkongi will be made to retract and repudiate allegedly xenophobic remarks he made two years ago.

International Relations and Co-operation Minister Lindiwe Sisulu and Police Minister Bheki Cele told African ambassadors in Pretoria on Monday that deputy police minister Bongani Mkongi would recant on remarks he made about how it was “dangerous” that a South African city was “80% foreign”.

The assurance was given at a meeting to discuss ambassadors’ concerns about a recent spate of attacks on African foreign nationals, mainly in KwaZulu-Natal.

The meeting agreed that after investigations by police into the circumstances of the attacks, a wider meeting would be held on Friday to finalise a joint plan which had been discussed on Monday to try to address the recurring problem of attacks on foreigners and xenophobia.

Sisulu said after the meeting that the government had assured the African ambassadors that the South African authorities would do their best to ensure the safety of foreigners.

The ambassadors have welcomed Pretoria’s prompt response to their call for a meeting to address the attacks. One ambassador said he and his colleagues had taken the opportunity to deplore the remarks by Mkongi at a press conference in 2017, at which he said it was “dangerous” that one whole South African “city” was now “80% foreign nationals”. If South Africa did not debate that problem, the whole of South Africa could one day become foreign and the future president of South Africa could be a foreigner.

“We are surrendering our land,” Mkongi added, accusing foreigners of “economic sabotage.”.

The 80% foreign national “city” he referred to, it emerged, was Hillbrow, a suburb of Johannesburg, and its surrounding areas.

Daily Maverick was originally told by the ambassadors that Mkongi had made the remarks last month. In fact, he made them in 2017. But one of the ambassadors said the video of Mkongi’s remarks was still viral and so was still inciting xenophobia. This was why they had asked the government on Monday to deal with the issue.

The African ambassadors said they had received “official assurances that the deputy minister will be made to recant, retract and repudiate those

Meanwhile, at a press conference after meeting the ambassadors, Sisulu said police would ensure that foreign trucks carrying cargo for export from Durban would not be attacked again as they had been last week on the N3 near Mooi River, when seven were torched. She said authorities had received information that there would be more attacks, but the government would prevent them.

Sisulu said that so far the government had been discussing the issue of xenophobic attacks with civil society, churches and representatives of foreign nationals in South Africa. Now that diplomats had become involved, she felt a solution would be found.

Sisulu said that South African government representatives and the ambassadors had agreed to meet again on Friday 5 April after the police had established more facts about the attacks and threats. She said she hoped the Home Affairs minister would also attend to discuss the issue of undocumented foreign nationals.

The police probe before Friday would include an investigation of a threatening message which has been widely circulated via social media over the past week and also sent to foreign diplomats. It warns all foreigners that, if they have not left the country by 13 May 2019, they would be “dealt with mercylessly (sic)”.

Sisulu said it was not clear if this message was serious, or who had sent it, but that much fake news was being circulated on social media which was fuelling tensions.

Sisulu said both President Cyril Ramaphosa and the ruling ANC believed the attacks on foreigners were “pure criminality”, but that at the meeting on Monday the government had agreed “to go beyond that” because some ambassadors felt the attacks were xenophobic.

She said it was not only a matter of criminals versus innocent victims, as there had been situations where it was “hard to draw the line between who did what”. Sisulu’s deputy Luwellyn Landers later explained this by saying that in one of the incidents which sparked the wider attacks, in Sydenham, Durban, a South African had been shot dead by a foreigner in a spaza shop after the South African had allegedly been threatening and had made demands.

In another incident, another South African had been killed in a Chinese mall after a shop there had been stoned and its roof collapsed. In the reaction to these incidents, about 300 Malawians living nearby had been attacked and had fled their homes.

Landers said Pretoria had urged the African ambassadors to make clear to their nationals that under South African law “unless your life, limbs or property are threatened, you can’t kill someone”.

He said this would be discussed further on Friday when everyone had more facts at their disposal about the Durban attacks.

Landers was asked why the government had been so quick to characterise the attacks on foreigners as purely criminal before the police had fully investigated the latest incidents.

He also recalled that President Ramaphosa had recently described the attacks as “rank criminality”. But Landers suggested that they were both criminal and xenophobic. The original incident, when a South African had tried to take over the Sydenham spaza shop, had been criminal, whereas the consequential attack by South African nationals on Malawian citizens had been xenophobic.

He said the South African government was helping Malawians who now wanted to go home, but Sisulu had told the Malawian High Commissioner to South Africa that it would be better for everyone if they remained.

Landers also responded to questions about why attacks on foreigners were recurring when an inter-ministerial committee had been established to deal with the problem after attacks in 2015.

He said this committee had “achieved quite a lot” and the working group now being established would be based on that committee.

Bene M’poko, the ambassador of the Democratic Republic of Congo (DRC) and doyen of the diplomatic corps in Pretoria, said if it was true that the 2015 plans had not been completely implemented or successful, it was important to keep trying — as one kept trying to tackle unemployment, for example.

He said he had felt a lot of commitment by the government and the ambassadors at the Monday meeting to tackle the problem.

He added that it was important not to get bogged down in definitions of what was an ordinary crime and what was xenophobia. Xenophobia could happen in any country. The important thing was that whenever an incident happened, everyone should find solutions together.

M’poko added that if there was xenophobia, it should be addressed through education. And if political parties made unacceptable statements, their leaders should correct them. He said such statements were more likely in the run-up to the 8 May national elections, when tensions were high.

Head of the UN in South Africa Nardos Bekele-Thomas, who attended the meeting, said at the press conference it was ironic that the Department of Justice had launched the government’s National Action Plan to combat Racism, Racial Discrimination, Xenophobia and Related Intolerance on 25 March, and the next day the attacks had erupted in Durban.

She said in Africa the problem was always implementation. The very comprehensive National Action Plan needed to be implemented to prevent a recurrence of xenophobic attacks. She urged civil society, business and the media to monitor progress in implementing the plan.

Much of the focus of the Cabinet-approved plan, which is on the Department of Justice’s website, is for more education to raise awareness about discrimination and xenophobia.

Zambia’s High Commissioner to South Africa, Emmanuel Mwamba, who raised concerns about the attacks last week, commended the government for responding so quickly and comprehensively to these concerns.

This article was updated on 2 April, 2019, with correct information about the date of Mkongi’s remarks.