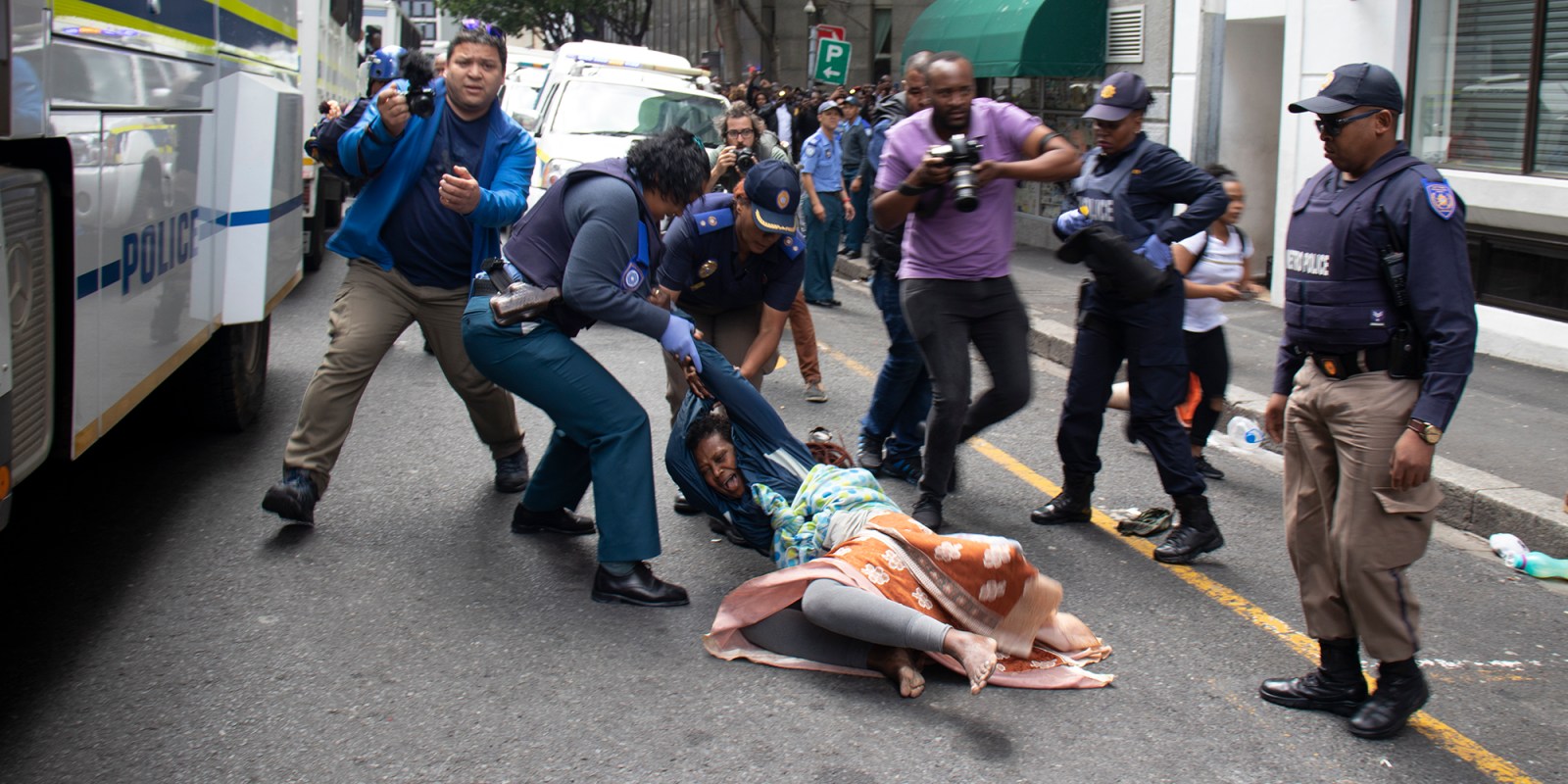 Chaos enveloped St George’s Mall in Cape Town after Public Order Police were called in to evict around 300 refugees and asylum seekers who had camped outside the United National Human Rights Council building in Cape Town on 30 October 2019. Photo: Aisha Abdool Karim

The shutting down by the Department of Home Affairs of refugee centres in 2011 and 2012 was an act of deliberate bureaucratic indifference which the courts unsurprisingly found illegal. The present protests by foreign nationals across the country are a direct consequence of the government’s willful withholding of administrative justice for foreign nationals.

On Sunday 3 November 2019, a community of about 300 protesting foreign nationals — men women and children from across Africa — woke early to clean the interior of the Central Methodist Church in Cape Town for the regular 10am service.

It was the fourth day the exhausted group found themselves encamped in the pews and on the floors of the church since being violently evicted on 31 October by police from outside the offices of the United Nations High Commission for Refugees, just a short walk from Greenmarket Square.

In the chaos and violence that ensued, the church opened its doors.

Those intimately involved in meeting and negotiating with leaders of the community have urged people to refrain from embarking on self-initiated fundraising efforts online and elsewhere.

The foreign nationals began the sit-in at the Waldorf Arcade on 8 October to demand that they be helped to leave South Africa and be moved, as a group, to a third country.

These are impossible demands. The options are either to be repatriated to your country of birth, which for many would-be life-threatening, or find a way to live in South Africa — and herein lies the heart of the crisis.

International and local law has not made provision for or foreseen this development — people from across Africa, some from Pakistan — who identify as a single group, borders erased, countryless.

The group of diverse protesters was driven ultimately to stage the sit-in by ongoing issues: official intransigence, neglect, corruption and incompetence, with regard to the status of refugees and asylum seekers as well as the September 2019 flare-up of simmering violence directed at foreign nationals who have been scapegoated by some for many of South Africa’s woes.

The Department of Home Affairs’ decision to shut down refugee centres to new asylum seekers was tantamount to government putting a paper bag over its head hoping that what it does not see will just go away. This lack of vision and leadership has brought us here, seven years later.

The decision resulted in bureaucratic hell for refugees and asylum seekers across the country. In 2017, the Supreme Court of Appeal ordered Home Affairs to reopen the Cape Town centre by 31 March 2018, but the department missed the deadline. It has now promised that it will be reopened in January 2020.

In the meantime, the minutiae of the lives of thousands of displaced people is consumed daily by the whims of the Department of Home Affairs and its officials. Everything is affected, the ability to work, attend school, find a place to live, to receive medical attention, UIF, to be free from violence and persecution.

On Sunday, with some community members decamped to the pavement and street outside, mattresses and blankets bundled and stashed out of sight, carpets were cleaned, doors flung open allowing a crisp breeze to carry out the previous week’s air, thick with the aroma of food, sweat and diarrhoea.

The protesters held their own service in the church at 9am. Piano, guitar, conga drums. It was a time for music, for lament, for singing and praying. It broke the sadness and the boredom of the week before. Spirits were temporarily lifted.

Afterwards, Reverend Alan Storey led the sermon attended also by regular congregants. He acknowledged the complexity of the moment, but urged those gathered and their leaders to think creatively about “where to go from here. This safe space will not be here forever”.

He asked South African leaders — nationally, provincially and in Home Affairs, to remember the humanity of those protesting.

“They make you stand in a line to get a paper that is only valid for three months. What can you do for three months? By the time you get work they say ‘you are going to be wrong here in a month’. And then it starts again.”

He urged leaders to watch their language.

“They must watch their words… These can encourage others to act.”

Community spokesperson, Jean-Pierre Balous, has repeated that the diverse community of foreign nationals including people from Burundi, the DRC, Somalia, Kenya and Pakistan — want to be repatriated as a group to a third country. This, he says, is a non-negotiable.

Balous has not endeared himself to other NGOs who have worked for years with refugees, accusing them on national television of being corrupt. Balous, with Papi Sukami, speaks on behalf of the protesters.

How this particular group came to be in this quandary at this moment, making these specific demands, was explained in part by Patrick Matenga, a member of the Western Cape Refugee and Migrant forum, who told journalist Lester Kiewit that people had been informed that the UNHCR was offering resettlement in Canada, Australia, and Europe.

“We heard that people were told that the UNHCR was taking people’s names for resettlement. The UNHCR knew nothing about that. So refugees were traumatised by the same people who were leading them. They were misled.” Matenga told Kiewit.

The UNHCR, in a statement, said it would, with the assistance of the South African government, continue to engage with protesters.

“UNHCR has been engaging with the refugees and asylum-seekers since the onset of the protests, encouraging them to participate in constructive dialogue to address their grievances and find a peaceful resolution to the situation,” it said in a statement.

That they wish to leave South Africa at this point is why they have chosen to remain encamped on mattresses, floors and pews of the church.

Thomas Harris, in his 2018 UCT dissertation for his masters in human rights law, wrote of the importance of administrative justice rights in international refugee law in relation to refugee rights in South Africa.

“It is the recognition of the obligations assumed under the international instruments, combined with domestic legislation in PAJA (Promotion of Administrative Justice Act) and the Constitution, that provide a stringent set of rights designed to give refugees appropriate administrative justice by way of having applications processed and decided upon according to the law, including reviews and appeals if necessary.

“As is apparent from many studies and scholarly articles on this topic, refugees seeking protection in South Africa are not always treated as the law intended. This has a number of different consequences, some of which can pose a danger to life. This emphasises the gravity of making the correct legal decision on a refugee application.”

As the protest enters its fifth week, the burden of resolving the impasse will have to be carried by the Department Of Home Affairs. The extreme violence by the SAPS in removing the protesters from the Waldorf Arcade, however, has not endeared anyone to South African authorities.

The UNHCR’s South African spokesperson, Helene Caux, has repeatedly assured protesters in Pretoria and Cape Town that the commission was working with the South African government, the SAPS, civil society and other stakeholders to strengthen protection responses and services. She said there were plans to develop “social cohesion programmes” to support the inclusion of refugees into South African society. DM