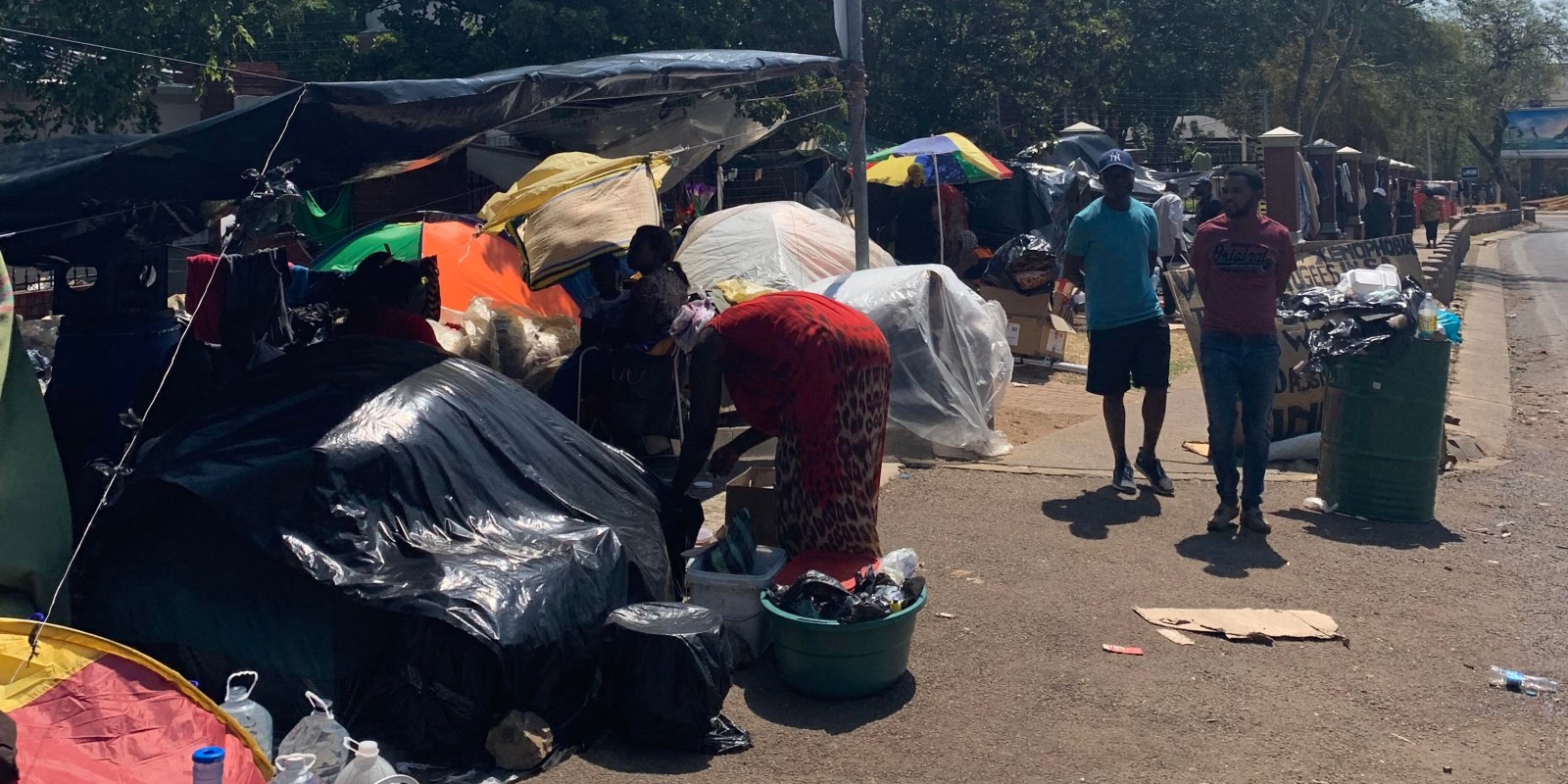 Hundreds of refugees remain camped outside the UN Refugee Agency in an upmarket Pretoria suburb as they await to hear whether an order will made to have them forcefully removed. Photo: Chelsey Moubray

While the High Court stands down to allow parties to clarify their statutory duties, hundreds of refugees remain camped outside the UN Refugee Agency in an upmarket Pretoria suburb as they wait to hear whether an order will be made to have them forcibly removed.

The Pretoria High Court has postponed proceedings in an urgent application brought before it on Tuesday 5 November 2019, by two Pretoria homeowner associations seeking the immediate removal of hundreds of refugees that have erected informal structures on the sidewalks of an upmarket residential area in Pretoria.

“The Unknown Protesters”, as they are cited in the applicants’ papers, are made up of foreign nationals and refugees seeking protection from the UN Refugee Agency, UNHCR, situated in Waterkloof, Pretoria.

What began on 7 October 2019 with 50 protesters setting up shelters outside the agency had escalated to 150 by the end of the day. On Tuesday — just shy of a month later — there are more than 400 men, women and children camped in informal structures along the upscale residential Waterkloof Road in Pretoria.

The Brooklyn and Eastern Areas Citizens’ Association and the Waterkloof Homeowners’ Association (the applicants) have cited the City of Tshwane (the City) and the Minister of Home Affairs as the second and third respondents respectively, as well as the Minister of Police and the Brooklyn Police Station, both of which have agreed to abide by and co-operate with the decision of the court.

The City and the Department of Home Affairs (DHA) have remained at loggerheads about issues relating to the legal status of the protesters and the application of relevant immigration laws in the matter.

When it became clear that disputes regarding the respective obligations of parties should be discussed constructively, Judge Natvarlal Ranchod decided to stand the matter down until Wednesday 6 November 2019 to allow for the parties to actively engage.

“It appears this matter will require some co-operation between the respondents, particularly the [City of Tshwane] and the [DHA],” he said.

The applicants approached the Pretoria High Court on Tuesday for an urgent interdict prohibiting the protesters from engaging in a list of activities.

The applicants sought relief on a number of grounds including prohibiting protesters from continuing to contravene the Regulation of Gatherings Act 205 of 1993 and from engaging in activities that create a nuisance to the surrounding residents as defined by the common law.

The relief sought further to prevent the protesters from erecting shelters, shacks and tents, causing unpleasant and/or offensive smells, making fires, cooking food, washing and hanging clothing on fences and trees, defecating, urinating and undressing and creating noise disturbances within the residential area.

The applicants also sought relief relating to the legal status of the protesters and requested that the relevant authorities act within their statutory powers to determine the identities of the protesters, who is legally authorised to reside and/or seek refuge in South Africa and ensure that these individuals be provided with suitable and safe intermediary accommodation.

The applicants have challenged the City’s nominal involvement in resolving the issue during the course of the month, arguing that the City has neglected its duty to act.

According to the homeowners’ associations, the protesters have contravened a number of municipal by-laws applicable to the City of Tshwane and as a result, the City has a statutory duty that compels it to act within in its statutory powers.

The City, however, has contested this, arguing that this matter pertaining to foreign nationals and refugees is a “political issue” and one that must be dealt with on a national level by the DHA and in terms of national legislation.

Counsel for the applicants on Tuesday argued against this vehemently, dismissing the City’s attempt to hide behind national legislation.

“There is no reason to hide behind national legislation and shy away from its own responsibility. If there are transgressions of municipal by-laws then the City must apply the law,” said advocate Thys Strydom.

“[The City] can act in co-ordination with the DHA, but they cannot simply say that they are not going to enforce the law.”

Counsel for the DHA put to the court that the department did not have the means or the resources to identify the protesters alone, but inferred its willingness to act in conjunction with the other parties and abide by the decision of the court.

At this point in the proceedings, Judge Ranchod recognised the opportunity for constructive dialogue between the parties and ordered that the matter be stood down for the following day.

“This is a matter for discussion between the City and the Department and I impress on [the parties] to co-operate and to deal with this constructively,” he said.

Amid this robust legal battle, very little mention was made of the desperate circumstances of the hundreds of refugees sleeping on the streets outside the UN Refugee Agency.

Aline Bukuru, a mother of three who fled the Democratic Republic of Congo in 2008, says that while she’d rather die than return to her own country, she feels equally unsafe returning to a community within South Africa.

“People of South Africa have been unfair to us. The authorities do not believe in making peace, they incite xenophobic attacks. This is not just happening now, its been happening for years and there is no solution,” she says.

The protesters have purposefully stationed themselves outside the UNHCR in a desperate attempt to source temporary protection and amplify their pleas to be relocated to a safer country.

The UNHCR describes itself as an entity that provides relief to refugees, asylum seekers and persons generally affected by humanitarian crises.

“We are asking the United Nations because they have a mandate to protect refugees. We will go anywhere — let them appeal to countries around the world and see where refugees from this country can go,” says Bukuru.

The protesters are waiting to hear the outcome of the application to have them forcefully removed.

Alex, also from DRC, says that even with proper documentation there is no place for foreigners in this country.

He says that no authorities will listen to refugees:

Bukuru said the protesters will continue their sit-in and will remain strong in their protests.

“We are on the streets, we are not on anybody’s property. We understand the challenges that these [residents] are going through, but we have no other choice.”

Arguments will continue in the Pretoria High Court on Wednesday 6 November 2019. DM

UPDATE on Wednesday 6 November, 2019 at 4.45 pm: Proceedings in the urgent application recommenced on Wednesday.

The applicants, City and DHA failed to reach a final agreement. Advocate Seth Nthai appeared for the first time for the DHA and sought to make new submissions despite the Department confirming  to the court earlier its intention not to oppose the application. Furthermore, Advocate Tebogo Ramahlaha made an unexpected appearance for the Minister of Police and the Brooklyn Police Station, announcing their joint decision to oppose the application, despite firstly, having legally agreed to abide by the outcome of the application and secondly, the fact that arguments had already been heard.

Judge Natvarlal did not accept these submissions but again recognised the practicality of discussing certain issues outside court and once again, postponed the matter to the following day – Thursday, 7 November 2019.