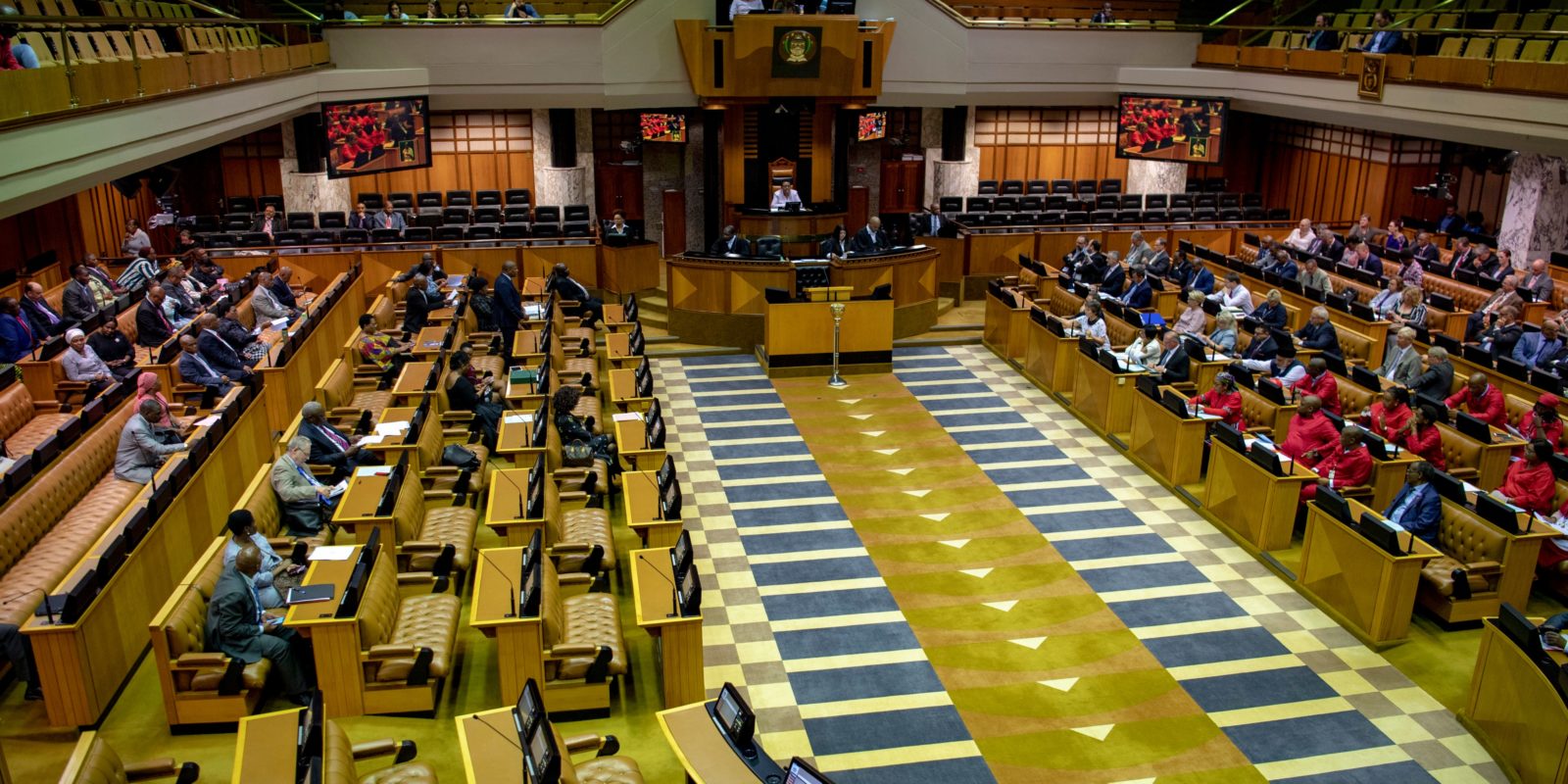 Four months after Parliament passed the National Minimum Wage Bill – it was signed into law by the President in late November 2018 to be effective from New Year’s Day 2019 – there must be an amendment bill to correct what ANC lawmakers on Wednesday said was “a mishap”, the wrong sequential cross-referencing of clauses. But the bottom line is those who make the law didn’t do their jobs properly, and not for the first time, as 2019 electioneering and politicking upped the pressure.

The national minimum wage legislation was meant to have been in place on Workers’ Day 2018, one of those pre-planned symbolism-heavy nods by the ANC government to its alliance partners, the trade union federation Cosatu and the South African Communist Party (SACP). It was not, predominately because Parliament started processing the draft law late, and then got stuck in the procedural and administrative quagmire at the national legislature.

It took the concerted push by Cosatu to help chart a way out of this for the ANC labour study group, one of the formal structures the ANC has for each parliamentary committee to bring together its MPs, ministers and deputy ministers and others in the state to coordinate their activities. Cosatu had hung its political hat on that wage deal. As had the governing ANC under President Cyril Ramaphosa, who since his days as deputy president had steered this wage deal as a flagship project through the National Economic Development and Labour Council (Nedlac) by early February 2017.

That that agreement could not be implemented as agreed on 1 May 2018 sparked a not insignificant political manoeuvring to explain away why the governing ANC could not do what was needed to give effect to its policies that had been agreed to in processes that involved business, labour and government.

And on Wednesday there was a similar approach to downplay MPs not doing their jobs, describing the mistake in the law Parliament passed as “a technical error” and one of mistaken consequential sequencing of cross-referenced clauses. Section 17(4) of the Act referred to Section 4(6) when it should have referred to Section 4(8) that backdates protection of workers from unilateral changes to their hours of work, terms and conditions and income ahead of the national minimum wage introduction from 1 May 2017. That section was not promulgated into law when the national minimum wage became effective from 1 January 2019.

Because the national minimum wage legislation was signed into law by the president, it now needs an amendment act to fix the error. And this is a whole process by itself that requires the permission of the House – and that’s only likely after the 7 February State of the Nation Address (Sona) – and the usual legislative steps like public hearings in both the National Assembly and National Council of Provinces (NCOP).

It’s at best awkward, at worst opens the door to manipulation and uncertainty. And that effectively undermines law-making and the credibility not only of the legislative sphere of the state. Now the state must depend on a political buy-in not to be embarrassed. It’s a far cry from the developmental, effective and capable state the National Development Plan (NDP) outlines and the governing ANC has been plugging.

It’s not the first time MPs have fallen short. But typos and cross-referencing mistakes in the Secrecy Bill, officially the Protection of State Information Bill, Parliament first passed in April 2013 were picked up and the draft law was referred back to Parliament by then president Jacob Zuma. Despite an opposition push to use this occasion to open up the lawmaking process, the prevailing political winds meant the ad hoc committee that drafted and now had to fix its mistakes, stuck to fixing the typos and incorrect cross-referencing. The bill was again passed by Parliament in September 2013 although over five years later it still has to be signed into law.

There are other examples, including those where political pressures particularly ahead of elections also got the better of the national legislature, like the Restitution of Land Rights Amendment Act. It was rushed through ahead of the 2014 elections as a key ANC deliverable, and 170,000 new claimants who used this reopening of the claims period today remain in limbo. The Constitutional Court rule the law invalid for insufficient consultations, particularly at the NCOP, and that the initial claims dating back to the first window that ended in December 1998 had to first be finalised. The court told Parliament to fix the legislation within two years, but that July 2018 deadline passed without the national legislature having remedied the law – a private member’s bill was too sluggish – and now the matter is in the hands of the courts and the National Land Claims Commissioner.

The Expropriation Bill, now in its third attempt to pass the legislative pipeline in the past decade, was first withdrawn in 2008 over a departmental refusal to allow for recourse to the courts. Revised and re-tabled in 2105 the Bill was on the back burner in Parliament pending the ANC December 2017 Nasrec national conference where expropriation without compensation was a key, and ultimately successful, policy push by the radical economic transformation grouping. That version of the Bill in 2018 was finally rejected by the public works committee, a decision that was agreed to in the House. The re-tweaked version of the Expropriation Bill that sets out the circumstances of compensationless expropriation of, for example, state land, land held for speculative purposes or heavily indebted land, is now before Parliament, again.

That the so-called technical mishap happened on the National Minimum Wage Act – the R20 per hour wage deal excludes domestic workers, farm workers and those working for government public employment programmes for two years – is embarrassing as this law is widely described as legacy legislation and as a fundamental shift in democratic South Africa’s labour regimen.

When President Cyril Ramaphosa announced the national minimum wage implementation date on 7 December 2018 – it was one of those orchestrated publicity events at the Walter Sisulu Square in Kliptown where in 1955 the Freedom Charter was adopted – Parliament’s labour committee chimed in. “The National Minimum Wage is one of the legacy legislations considered by the committee and passed by both houses of Parliament during its 5th term,” said labour committee chairperson Lemias Mashile in a statement, adding that “while the minimum wage is a reasonable beginning, much more efforts should be placed in reaching the desired living wage”.

At Wednesday’s labour committee meeting on the National Minimum Wage Act, DA MP Michael Bagraim said he was “upset” the special meeting had to be scheduled in the parliamentary recess. He had pointed out the error last year and, when ignored, wrote to the Presidency and labour. “We need to think things through very carefully… rather than rush because of the Christmas holidays.”

Mashile, also an ANC MP, rebuked the opposition MP in typical governing party style invoking protocol and processes as yardsticks. “The House has rules, processes. At the time when you asked us to debate… the processes were not down. The work of Parliament is not done because someone has a feeling it should happen…”

But that’s just it. When the obsession with processes and protocol override common sense and professionalism – passing correct laws is part of MPs work, alongside oversight and a range of other responsibilities like asking questions from ministers both in writing and in person – there’s a problem.

And in the year before the 2019 elections Parliament upped the pressure on the legislative programme by shaving three months of its calendar, including a two-month mid-year break, for MPs to be in communities.

In 2018 Parliament passed a total of 23 laws, according to the year-end statement by the presiding officers, National Assembly Speaker Baleka Mbete and NCOP Chairperson Thandi Modise. Of those 23, several dated back two years or more and four laws are mandatory budget-related laws that must be passed to give effect to February’s Budget, and the adjustments announced in October’s Medium-Term Budget Policy Statement (MTBPS).

It’s not as if 23 laws are a gargantuan amount of legislation, and the expectation that Parliament passes good, properly considered laws is not an unreasonable one. But the National Minimum Wage Act debacle indicates otherwise. DM