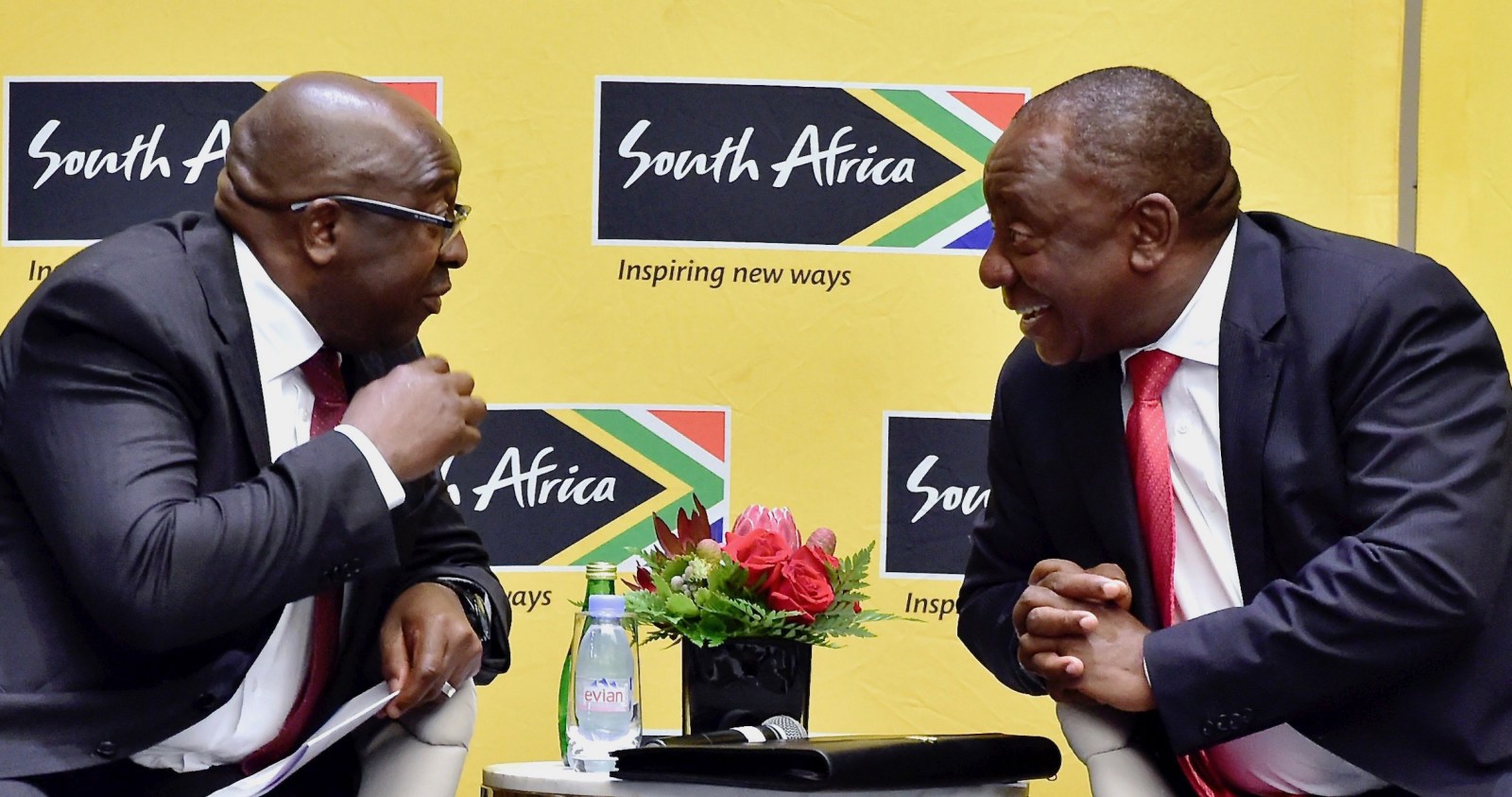 (in the Pic - President Ramaphosa interacting with Finance Minister Nhlanhla Nene). President Cyril Ramaphosa engages with South African business leaders at a business breakfast in Beijing , the People's Republic of China , ahead of the state visit and the Forum of China-Africa Cooperation (FOCAC). President Ramaphosa will leverage this visit to step up South Africa's drive to attract investment into the South African economy to stimulate inclusive growth and create employment. #SAinChina #BetterAfricaBetterWorld 01/09/2018, Elmond Jiyane, GCIS

To say South Africa’s public finances are in mess would be like putting lipstick on pig. But politics is about spin and making the impossible at least look plausible. That’s despite the raft of grim economic indicators hanging over October’s Medium-Term Budget Policy Statement (MTBPS), the adjustments to February’s departmental allocations, and signals priorities going forward to Budget 2019.

In the government budgeting process right now, departments have been told whether they are getting their financial wish list extras, or whether they must trim back. The results will be announced when Finance Minister Nhlanhla Nene takes the podium in the House on 24 October.

It’s been a rough six months, economically speaking, since February’s Budget announced a fuel levy increase and hiked to 15% value added tax (VAT) in an effort to plug a R48.2-billion hole in the national purse after the South African Revenue Service (SARS) failed to meet its agreed-to tax collection target.

Economic growth contracted, by 2.2% in the first quarter of the 2018 financial year, according to the South African Reserve Bank in July, which revised economic growth forecasts down to 1.2%, down from 1.7% earlier in the year.

Unemployment is up, according to Statistics South Africa in late July, with more than one in three working age South Africans, or 37.2%, jobless on the expanded definition that includes those too discourage to even try look for work.

Financial demands from state-owned entities (SOEs) continue, be it SAA that by all accounts needs at least another R20-billion government bail out, or Eskom, the power utility described during February’s Budget as the “biggest risk” to the economy. It remains so.

Government is trillions of rands in the hock — R2.2-trillion in 2017/18 financial year, because borrowing increased in recent years. And so debt repayment costs ballooned to one of the biggest line items, or R163.2-billion in the 2017/18 financial year. This year government had to borrow just under R25-billion to help repay borrowings, according to February’s Budget documentation.

In June 2018 the International Monetary Fund (IMF) raised its concerns about South Africa’s ballooning public debt — it noted bailout costs from loss-making SOEs that stood at 53% of gross domestic product and left “little room for fiscal policy to support growth”.

National Treasury did not dismiss the IMF concerns, but in a statement issued after these discussions said it had pointed out a number of interventions such as the planned job summit and investment summit — both are scheduled for October — and “steady progress” in structural and other reforms with regard to SOEs.

South Africa is at a crucial moment — and public finances are front and centre.

The presidency of Cyril Ramaphosa marked the political end to State Capture. Steps are under way to rehabilitate institutions such as SARS, the Hawks and the intelligence and prosecution services damaged by politically pliant appointees. Steps have been taken to unpick the economic and financial collusion in the SOEs that made headlines for all the wrong reasons, from Eskom to Denel and Transnet.

The processes are not without issues, but it’s moving forward. And Nene told the National Council of Provinces during its recent debate on SOEs that in the rebuilding of these state-owned entities, the risk of “focusing more on heroes and their heroic deeds” must be avoided as the central imperative was to rebuild the institutions.

Although a final State Capture cost tally will remain outstanding for some time, if an exact number is ever arrived at, it’s safe to say it cost South African tens of billions of rands. That includes the multi-million rand finder’s fees that were written into, for example, contracts for locomotives as millions more were moved to allocate contracts to one or other Gupta-linked company, from business media breakfasts to ensuring coal supplies.

The focus on State Capture is important. But it leaves unattended on the to-do list the finances at provincial and local government level. For years consecutive auditors-general reports sharply pointed out the lack of political will to act against contraventions of public finance law and regulation. The strong words about the lack of consequence to management on public finance abuse have largely been ignored.

In May 2018 Auditor-General Kimi Makwetu showed irregular expenditure rose to R28.3-billion at local government level in the 2016/17 financial year, and fruitless and wasteful expenditure increased to R1.5-billion, a 71% increase from the previous year, as one in three of South Africa’s 257 councils was dysfunctional.

Five months earlier, in November 2017, the national and provincial audit report showed irregular expenditure stood at R45.6-billion — and six of the 25 SOEs that should have submitted their financials to the Auditor-General failed to do so.

Public finances remain fraught and vrot, particularly when the tight national purse strings are forced looser to meet socio-political pressures in the run up to elections in 2019.

On Monday, Energy Minister Jeff Radebe said government was, in a “once-off temporary” intervention, holding off this month’s petrol price hike, although the price would go up by five cents a litre to accommodate the negotiated salary increases for petrol attendants, cashiers and administrative staff.

That ministerial announcement, silent as it was on the financing of this intervention, came as consecutive petrol price increases in July triggered consumer dissatisfaction, and opposition DA political protests. Radebe, who in August was questioned in Parliament on the petrol price, clearly is aware of these socio-political dynamics: “This is a once off temporary intervention to provide some relief to motorists and consumers against fuel price hikes,” he said in the statement.

In August an additional nine zero-rated VAT items, including white bread, cake flour, uniforms, nappies and sanitary products, were announced. The panel that reviewed the list of zero-rated goods was established in April 2018 amid continuous, widespread and vocal public outcry over the VAT hike to 15%.

Immediately after the Budget National Treasury argued the VAT increase was a “certain source” to balance the books left unbalanced by SARS’ collection failures — and redress was not the role of tax systems.

Like the Ramaphosa presidency marked the political end to State Capture, it was meant to mark the start of a new social compact, inclusive economic growth, to invigorate job creation and also fund a list of added measures from the National Health Insurance to accelerated land reform.

It’s just there are no spare cents in the national purse. Hence, right from the start, Ramaphosa talked of international investment. $100-billion over five years, although at this stage he’s managed to make significant inroads — more than a third of the total amount in pledges just six months into the job, much of it from China and still a month before that much-talked-about investment summit.

But that Ramaphosa has to travel across international timelines to fundraise for the country in places outside the country, be it China, Saudi Arabia, the UK and elsewhere, is an indictment on South Africa’s political economy.

Corporate South Africa is sitting on an estimated R1.4-trillion in what the trade union movement has long called an investment strike. The glib big business response would be to say that’s the outcome of State Capture and reluctance to invest in an economy that’s captured, or to argue there’s nothing to invest in due to policy uncertainty and all that. However, this corporate investment strike dates back well over decade — in 2005 some R242-billion was stashed away — all the way back to the height of the Mbeki presidency’s pro-business Gear (Growth, Employment and Redistribution) that saw South Africa’s economy grow to make profits, but not jobs.

South Africa’s public purse has not a cent to spare for igniting that much talked about, and desperately needed, inclusive growth and economic stimulus to take the country out of the low growth, high unemployment quagmire.

And so the silence on the stimulus package ANC president Ramaphosa spoke of in a late-night address to the nation that blurred the lines between party and state has been resounding, even as the ANC lekgotla in late July, led to the lekgotla of the Cabinet of the governing ANC in early August.

“The (ANC) lekgotla directed government to move with urgency to develop and implement a stimulus package to ignite growth that will lead to the creation of jobs, especially for young people and women. These efforts should focus on rural communities and townships,” said Ramaphosa, speaking as ANC president on the conclusion of the party gathering on 31 July 2018.

“This stimulus package will be based on existing budgetary resources and the pursuit of new investments while remaining committed to fiscal prudence.”

The silence after the Cabinet lekgotla sparked speculation that at least some R43-billion was needed for this stimulus package, with DA MP Alf Lees arguing that another R59-billion for SOE bailouts was required, pushing up the amount to R102-billion.

A tersely worded statement the Finance Ministry on 13 August said any and all stimulus measures would go though the usual budgetary processes, including the Ministers’ Committee on the Budget, before being approved by Cabinet. “The measures that are being considered for igniting economic growth will be funded through the reprioritisation of existing budgetary resources. Further details on these measures will be announced by the President in due course.”

South Africa’s public finances are vrot and fraught. Delivering the MTBPS 2018, Nene as Cabinet’s point man has a difficult task at hand. DM