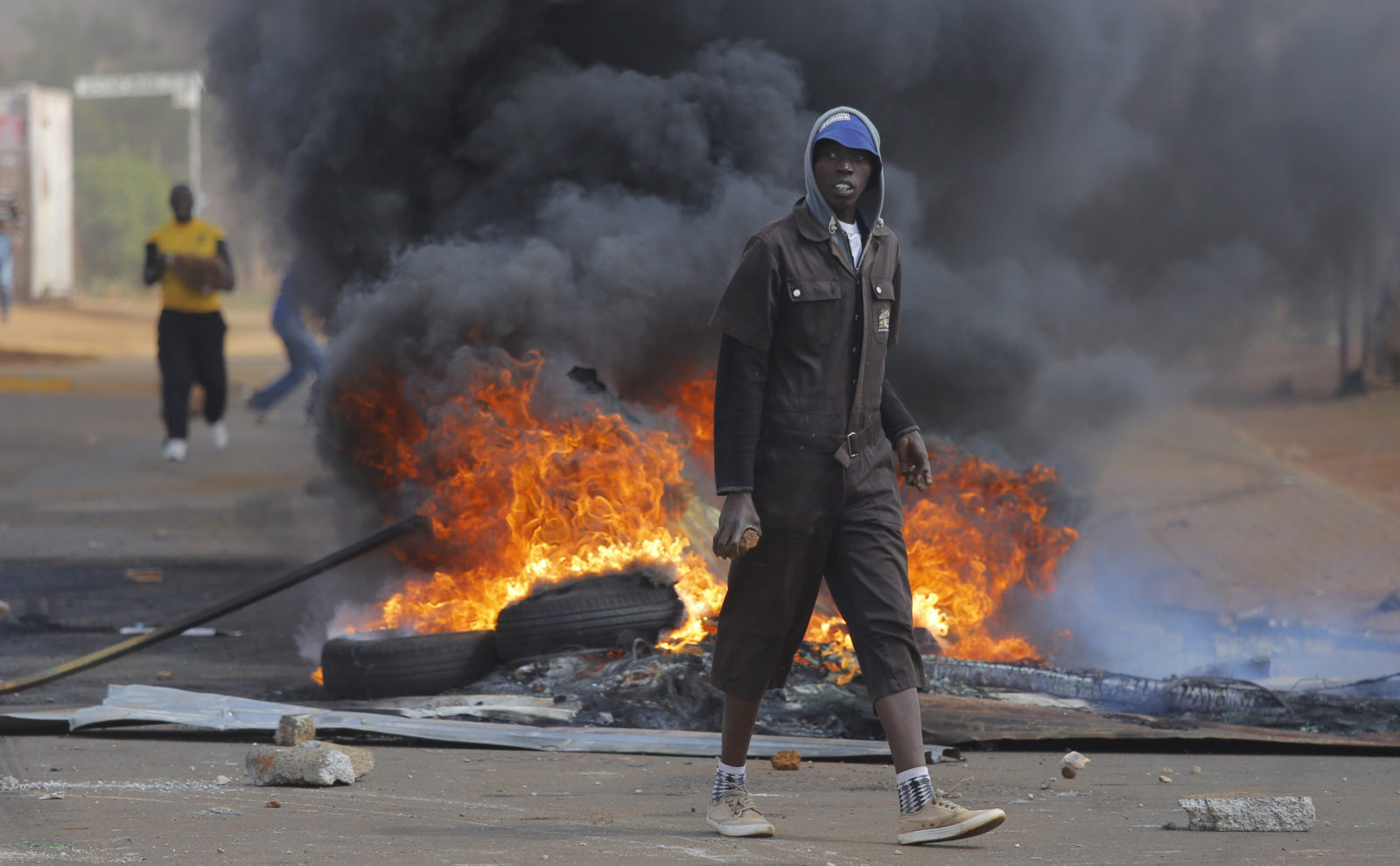 A man walks in front of burning tyres during ongoing clashes with police forces in Bekkersdal near Johannesburg, South Africa, 24 October 2013. EPA/KIM LUDBROOK

Local government is in a mess. After umpteen years of pointing out the lack of political leadership, lack of consequences for wrongdoing and inadequate internal controls, especially in procurement, the latest consolidated municipal audit on Wednesday again painted a grim – and worsening – situation. Just 33 of South Africa’s 257 councils received a clean bill of financial health, while one in three is dysfunctional and the others fall somewhere in-between.

The auditor-general is gatvol. Of course, Auditor-General Kimi Makwetu would never say it like that, but it’s clear from the unprecedented blunt language by standards of auditor-speak in Wednesday’s release of the local government audit outcomes for the 2016/17 financial year.

That audit showed “an overall deterioration”. Previous advice and recommended corrective action has “largely not been implemented, at best, or totally ignored, at worst…” Makwetu said.

“Accountability continues to fail in local government,” he added.

“… (W)e are still faced with the same accountability and governance challenges we had flagged throughout these years.”

According to the consolidated 2016/17 audit outcomes, one in three councils simply did not investigate procurement fraud and misconduct. And 61% of councils that incurred irregular expenditure – many were repeat offenders – failed to conduct the statutorily required investigations, meaning there were no consequences for such contraventions. Only R1-million was recovered of the R16.2-billion irregular expenditure incurred in the previous 2015/16 financial year.

If councils ignoring a constitutionally established Chapter 9 institution to support democracy was not concerning enough, it also emerged that the auditor-general’s staff have been intimidated, threatened and put under pressure to change audit outcomes, particularly when it became clear a council was headed to getting a negative verdict. It’s reliably understood that threats included phone calls hinting at action against families.

Instead of fixing the problem, the focus in many councils is on contesting the outcome. This comes against the backdrop of 86% of councils fail to comply with the law, the highest level since 2012.

In democratic South Africa local government was meant to be the coalface of service delivery. But a councillor’s job is also frequently seen as a leg up to middle-class living, particularly as there are no required minimum qualifications – aside from making it onto the political party election candidate list. But the consequences arising from political factionalism and patronage can be lethal: a councillor’s or municipal manager’s anti-corruption stance has been fingered as motive in several killings in KwaZulu-Natal, Mpumalanga and North West, including in the September 2017 killing of former ANC youth league secretary-general turned uMzimkhulu ward councillor Sindiso Magaqa. Earlier in May three other KwaZulu-Natal councillors from both the ANC and IFP were killed, and retribution for stopping tender patronage and political in-fighting was again raised.

Following the 1998 Municipal Structures Act that introduced unified 284 councils, by 2000 apartheid segregation was structured out of the system for the municipal poll in December that year. The 2000 Municipal Systems Act and the 2003 Municipal Finance Management Act (MFMA) democratised local government, regulated its financial management and aimed to ensure residents’ participation in local socio-economic development and have councillors and council administrations held accountable.

Issues, however, soon arose. By October 2004 there was Project Consolidate, a two-year national programme aimed at ironing out financial management irregularities and to bring underperforming councils up to scratch. It floundered.

“This old department focused more on local government to the neglect of provincial government and traditional leadership… (T)he primary weakness of Project Consolidate was that it was technocratically driven with inadequate political oversight and buy-in.”

Then 2014 came and went, and there were few clean local government audits.

“We rated the financial health of 92% of the municipalities as either concerning or requiring intervention (82% in 2012-13 when our overall assessments were introduced). The most concerning indicators over the past three years were municipalities spending more than the resources they had available… debtors (ratepayers and consumers of water and electricity) not paying or taking very long to pay their debt; and creditors not being paid on time. In total, 26% (just over a quarter) of municipalities were in a particularly poor financial position by the end of 2014-15, “ said the auditor-general local government consolidated report of the 2014/15 financial year.

Fast-forward to 2018, a few years into the Back-to-Basics programme.

“The inability to collect debt from municipal consumers was widespread… The financial woes of local government also weighed heavily on municipal creditors. The impact of this inability to pay creditors was most evident in the huge sums owed for the provision of electricity and water to Eskom and the water boards, respectively. A combination of various factors, including poor revenue and budget management, and the non-payment of creditors, led to 31% of the municipalities disclosing in their financial statements that they might not be able to continue operating,” according to the auditor-general.

If all of this sounds obtuse, it is not. It’s part of the vicious cycle, impacting beyond local government. If councils overspend and can’t collect due revenue – consumer debt has increased by R15.7-billion to R128.4-billion in the 2016/17 financial year – they can’t pay Eskom, water boards and other creditors. With Eskom owed R13.9-billion, and various water boards around R4-billion, the power utility and water and sanitation departments must look at alternatives. That means electricity tariff hikes and a Hobson’s choice of either canning water and sanitation projects, or digging deeper into taxpayers’ pockets.

As councils do not plan properly – one in four road projects miss completion dates as do one in four water projects, while 55% of road projects and 46% of water projects had no future maintenance plans – service delivery is impacted upon. There should be no surprise at community protests over shoddy, or non-existent, services promised by politicians. This also extracts a cost: between April and December 2017, the SAPS responded to 10,711 protests – all but 2,500 were peaceful – according to Police Minister Bheki Cele in his budget speech. And the SAPS public order policing unit is only half staffed, MPs had heard earlier.

While the politicians may choose to describe the auditor-general’s findings as a “yardstick”, as the Co-operative Governance Ministry did on Wednesday, rather than a firm statement of fact at a particular time, National Treasury has echoed this paltry state of affairs.

Capital budgets, meant primarily for infrastructure, have consistently been underspent – and underspent by more councils – while operating budgets that include salaries have been overspent, according to its “State of Local Government Finances and Financial Management as at 30 June 2017”, released earlier this week.

This comes as the report outlines 7,378 training sessions held with municipalities and 3,937 sessions with advisers based in councils, up from the previous year’s 2,553 such sessions.

But where the municipal manager’s post is vacant, “accountability is weak”, the National Treasury report said.

“The second indicator of managerial failure is the tendency of senior managers to polarise themselves with political factions, while the third indicator is generally incompetence of the staff complement,” it added.

The auditor-general’s audit findings, again like previous years, echo this toxic mix of politics, factionalism and money. It’s perhaps no surprise there’s not a single clean municipal audit in either the Free State or North West. The political leaders of both provinces – the Free State’s Ace Magashule and Supra Mahumapelo in the North West – played key roles in the ANC factional battles to the December 2017 ANC national conference, although ultimately on the losing side.

“Political infighting at council level and interference in the administration weakened oversight and the implementation of consequences for transgressions, and made local government less attractive for professionals to join,” said the 2016/17 consolidated audit outcomes.

None of that was even hinted at in the official reactions by Co-operative Governance and the statutory entity representing councils, the South African Local Government Associations (Salga).

Yes, there were expressions of concern on Wednesday about the local government audit, but the spin was on massaging the numbers. And so Co-operative Governance Deputy Minister Andries Nel focused on 56% of councils, or 145, with an unqualified audit with findings as the good news. It’s somewhat disingenuous, as findings can be very serious, but it makes use of the shortcomings of the auditing process. As long as there are documents to underscore financial decisions, there will not be a qualified, adverse or disclaimed audit function. But just because a council has the paperwork, it does not mean all’s good.

By Co-operative Governance’s own admission, one in three councils is dysfunctional and 11 are under administration in terms of Section 139 of the Constitution. After over a decade-and-a-half of interventions, special meetings and summits and continuing hands-on assistance and training, the verdict on the state of local government is damning.

While Co-operative Governance Minister Zweli Mkhize in his budget vote speech earlier this month named and shamed the 87 dysfunctional councils, there was little more than more of the same: more training, more guidance, more assistance. This even as the National Treasury report showed the around 10,000 training sessions had at best doubtful impact given the 2016/17 consolidated local government audit outcomes.

“We need to recommend that the next administration should conduct a comprehensive review of the wall to wall municipalities,” said Mkhize, adding:

“Distress may be occasioned by mismanagement due to political instability or interference, corruption and incompetence.”

On Wednesday President Cyril Ramaphosa described the state of local government as “a matter of great national concern that requires the urgent and dedicated attention of the highest office”, before announcing a presidential local government summit to bring everyone together.

There’ve been such summits before, all the way back to 2004. It could all be a talk shop, even in this new dawn, given the political dynamics and patronage networks.

But there are interesting steps afoot in Parliament to strengthen the auditor-general’s powers, including the issuing of certificates of debt that would hold accounting officers liable to repay misspent monies and the power to refer contraventions to investigative agencies like the SAPS and Hawks.

On Wednesday, chairperson of the Standing Committee on the Auditor-General, Vincent Smith, said the legislative amendments would be passed before Parliament rises. It was hoped this could be the trigger to change attitudes.

“As long as you are not dead, they will find you,” said Smith, adding it was crucial to stop the revolving door of accounting officers who are suspended, but resign, only to pop up elsewhere in the public service.

The reasons for the ill-health in local government have been apparent for a long time: lack of political leadership, lack of consequences and lack of internal controls and compliance with legislation.

Until a councillor’s seat or a municipal manager’s post stops being a political inducement, nothing will change. Until then residents in municipalities across South Africa pay the price. DM