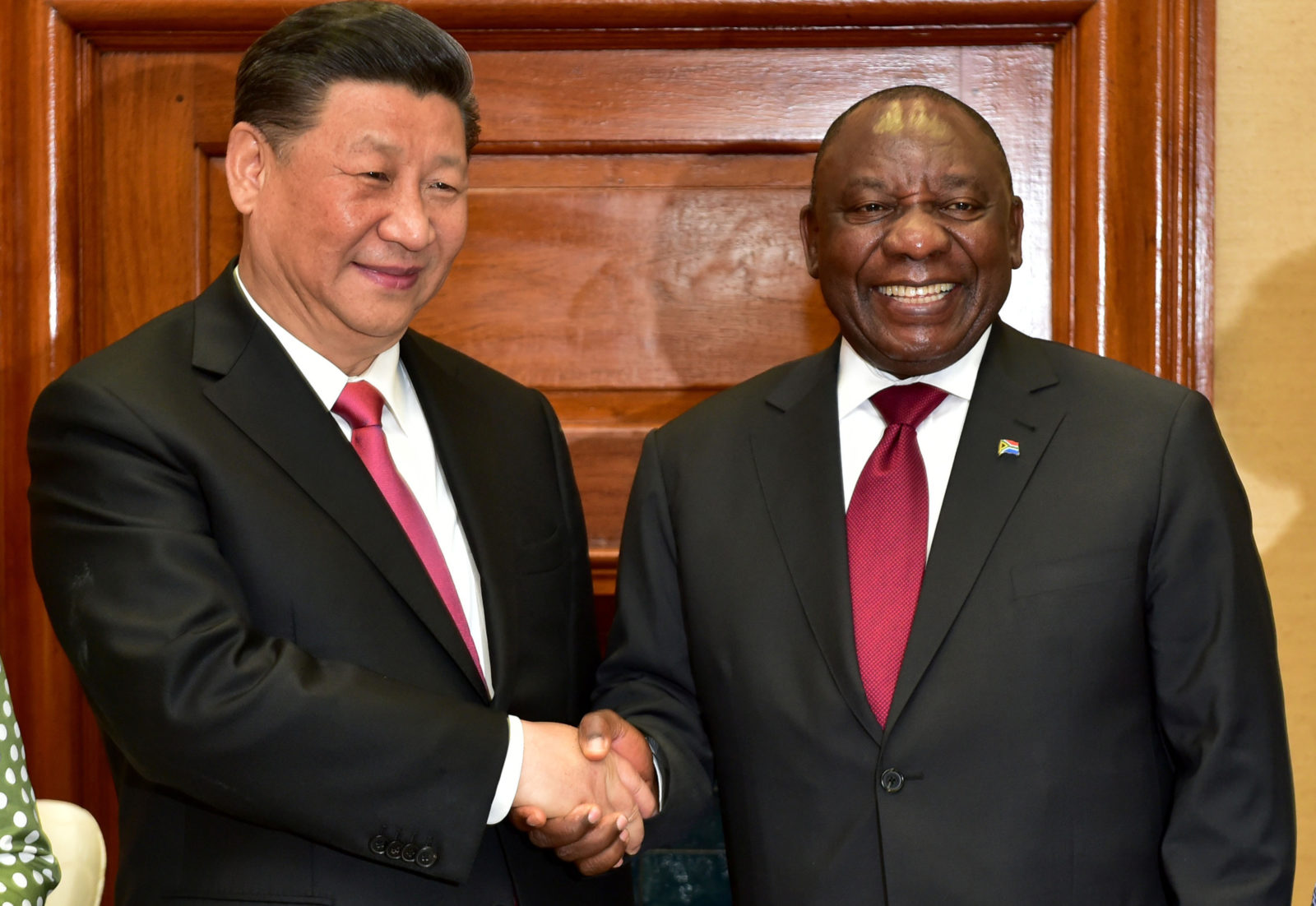 President Cyril Ramaphosa and President Xi Jinping of the People’s Republic of China having a bilateral meeting during his State Visit to South Africa, at the Union Buildings in Pretoria on July 24 2018. Photo: Kopano Tlape GCIS

In addition to $14.7-billion in investments promised by China, the cash-strapped state-owned enterprises which had dodgy links to the Guptas, Eskom and Transnet, will receive major new Chinese loans worth a combined R37.7-billion.

Chinese President Xi Jinping has committed China to investing $14.7-billion in South Africa, President Cyril Ramaphosa said after meeting Xi in Pretoria on his state visit to South Africa on Tuesday. This would be a significant boost to Ramaphosa’s international drive to raise $100-billion in investment over the next five years.

Xi himself announced at the same joint press conference with Ramaphosa that China would take “active measures” to boost imports from South Africa to support the country’s development agenda and priorities.

And a $300-million (R4-billion) loan from Industrial and Commercial Bank of China (ICBC) will go to another ailing state-owned enterprise, Transnet.

The two loans deals were among 14 different agreements signed between South African and Chinese government departments, SoEs and private companies after the Ramaphosa-Xi official meeting.

Trade and Industry Minister Rob Davies explained to journalists that the measures which Xi had agreed to take to boost South African imports included sending more buying missions to South Africa, with a focus on purchasing value-added goods from this country. Pretoria sees such measures as steps towards establishing more balanced trade with China, rather than just exporting raw materials to that country, and importing Chinese manufactured goods.

As an example of the type of Chinese investment South Africa is looking for, Davies said that Ramaphosa and Xi would later on Tuesday participate by video in the launch of the R10-billion car factory built by the Chinese vehicle company BAIC in the Coega special economic zone near Port Elizabeth.

He said this investment had been announced at the time of Xi’s last state visit in 2015 and the first vehicles would be rolled out on Tuesday.

“What’s special about the Chinese is when they make a commitment to invest, they’re reliable and they happen,” he said.

Davies added that the Chinese TV and domestic appliance manufacturer Hisense would also be expanding its local production.

But he also disclosed that South Africa invests a lot more in China and other BRICS countries than they invest in South Africa and that this imbalance needed to be corrected.

He said China’s accumulated total investment in South Africa to date was about $11-billion and that South Africa had invested a greater amount than that in China.

South Africa’s investment imbalance with the other four BRICS countries as a whole was even greater. Total outward investment was about $60-billion against only $18-billion of inward investment. That’s why he would be arguing at the BRICS Business Forum in Sandton on Wednesday that BRICS needed to support more investment-led trade. If South Africa could expand its production capacity, it and other BRICS countries could also increase their manufacture of intermediate goods which would boost trade in supply chains.

Davies said about two thirds of world trade was now in such intermediate goods and that the focus needed to be on investment-led trade, not the other way round, (as many economists advocate).

The BRICS Forum, which all the leaders of the BRICS countries – Brazil, Russia, India, China and South Africa – are to attend, will be the first leg of the BRICS summit. On Thursday the five BRICS leaders, Ramaphosa, Xi, Brazilian President Michel Temer, Russian President Vladimir Putin and Indian Prime Minister Narendra Modi will have a meeting among themselves, followed by a retreat.

On Friday the five leaders will have two separate “outreach” meetings, one with several African leaders and another with non-African leaders, mostly representing regional organisations.

Davies said that apart from new investments, the other important announcement by Xi on Tuesday was to take active measures to increase imports from South Africa. In addition to sending more buying missions to this country, he said China had already relaxed health restrictions on South African beef imports and had undertaken to do the same for dairy imports.

But Davies said South Africa and China were not now talking about easing trade tariffs through a free trade agreement.

Eskom Chief Executive Phakamani Hadebe told journalists after signing the loan agreement with the China Development Bank that the loan would help Eskom reach its funding requirement for the financial year, currently at 62%.

The loan demonstrated confidence in Eskom’s new leadership appointed in 2018 after a new board had been appointed, he said.

And Eskom’s group treasurer Andre Pillay confirmed that a $180-million loan granted to Eskom by the BRICS New Development Loan two years ago would definitely now be taken up. Other officials had indicated that the loan had become “dormant” because it had been intended to finance the building of power lines to link renewable energy plants, built by independent power producers, to the national grid. It had been suggested that in 2016 Eskom had no use for the loan as it had stopped buying renewable energy and was focusing on building nuclear power plants.

But Pillay denied this, saying the loan had never been abandoned and that Eskom had only been waiting for projects with the right content to be presented.

The other agreements signed after the Ramaphosa-Xi meeting included a deal to make it easier to get visas to travel to both countries, a financial agreement and a special agreement for the development of small and medium size enterprises (SMEs) on the continent.

“President Xi and I have agreed to support each other to improve the lives of our people. We have agreed that we must work together,” Ramaphosa said.

Xi said the easing of visa restrictions was part of an agreement with Ramaphosa to put people at the centre of developing relations between the two countries.

This would also include establishing cultural centres in each other’s countries, recognising each other’s degrees and diplomas and boosting exchanges of people in education, culture, tourism and among women and youth.

He also said the two countries should increase their co-operation in China’s huge Belt and Road Initiative which will link China to central Asia, Europe and Africa through vast land and sea development corridors.

Xi said the two countries would prioritise co-operation in infrastructure, trade and investment, science and technological innovation and financial co-operation.

Xi pledged China’s support for the big investment and jobs summit which Ramaphosa plans to hold later in 2018 in an effort to attract $100-billion of investment in five years and said China would take “active measures to expand imports from South Africa to support the government in achieving its development agenda and priorities”.

Xi said China and South Africa held similar views on international issues and so should work more together to strengthen multilateralism – the inclusion of all nations in reaching international decisions.

This would include bolstering the multilateral (international) trade system and increasing democracy in international relations. DM