When 2019 electioneering calls, the business of the House gets into hyperdrive 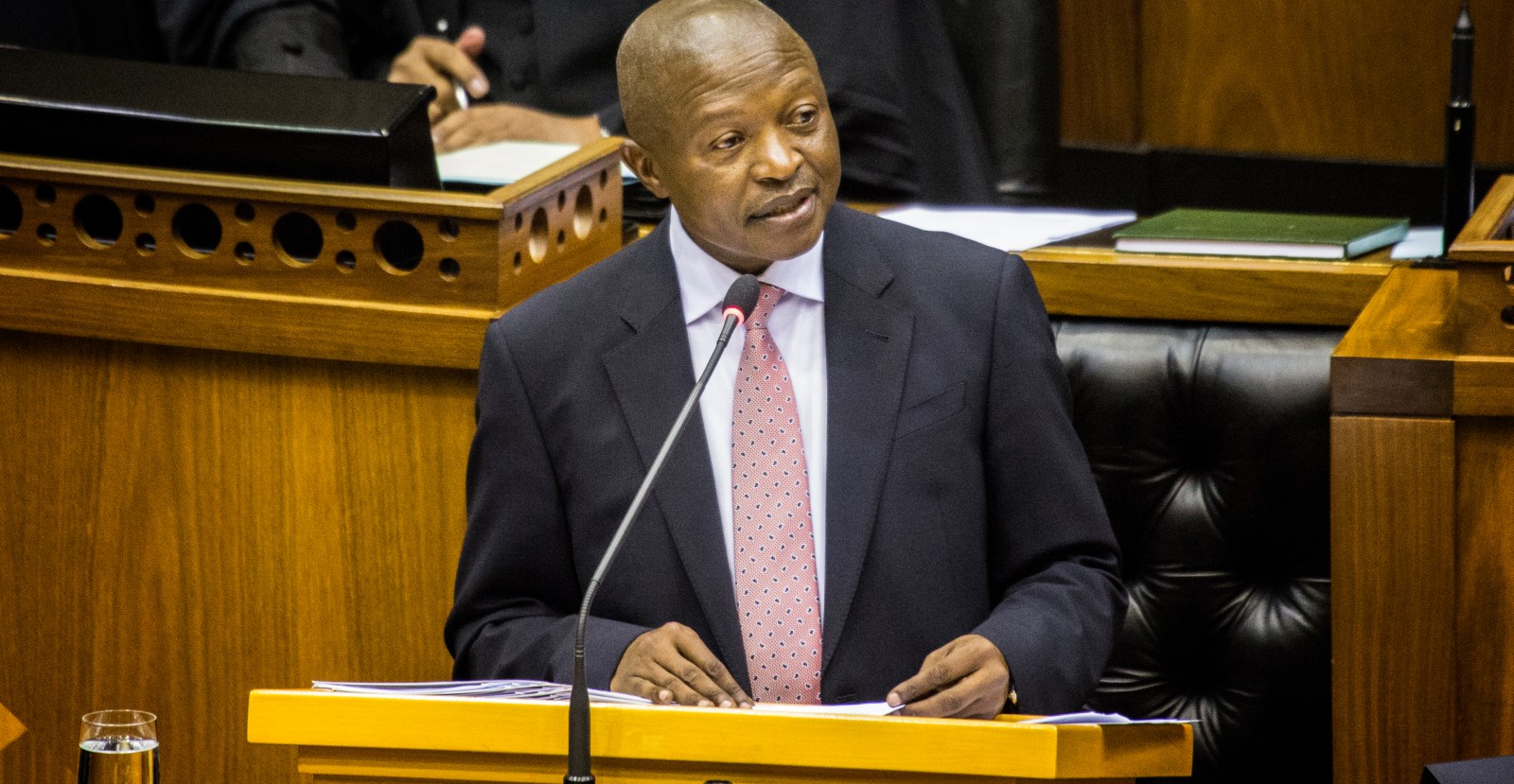 The national minimum wage inched closer to getting on the statute books after the National Assembly passed it by the smallest of margins following a walkout by the DA and EFF. This Bill, together with the two required amendments to existing labour laws, was among six draft laws passed by the National Assembly in an-all day session.

Tuesday was the last sitting before an extended two-month recess for MPs to spend time in constituencies – elections 2019 are looming – and it was all hands on deck to clear the decks.

The House started sitting at 09:00 – unusually early, but for good reason. The MPs of the home affairs committee that was to be briefed by the Electoral Commission of South Africa (IEC) on its 2019 election readiness on Tuesday morning first needed to deal with its decision to consider legislative amendments to the Immigration Act.

And so Tuesday turned into a marathon nine-hour sitting without even one comfort break to clear an overloaded in-tray before MPs go on what’s called an “extended constituency period”, effectively a more than two-month recess for electioneering.

As the case of the home affairs committee MPs showed, it was a careful balancing act given that at least eight committees sat alongside several Cabinet committees up Parliament Avenue in the Tuynhuys presidential offices.

That the parliamentary benches were sparsely occupied didn’t matter so much for the first few items on the order paper.

Even if the DA politicking about an ANC government efficiency deficit and IFP Chief Whip Narend Singh saying it was worrying that the courts were “more often than not” telling Parliament its laws were not up to scratch, the Immigration Act proposed amendments were agreed to. And so was the suspension of an East London magistrate for claiming travel costs for her own purse although they had been paid by the state.

The largely empty parliamentary benches also didn’t matter so much when it came to adopting the Public Audit Amendment Bill. Everyone agreed it was a brilliant move for good governance to give the auditor-general more teeth.

Once this Bill is agreed to by the National Council of Provinces (NCOP) and signed into law by the president, the auditor-general can refer financial irregularities uncovered during audits to law enforcement agencies, and issue certificates of debts against accounting officers, to hold them personally responsible for repaying mismanaged funds.

In the wake of an abysmal and deteriorating local government audit, and threats against the staff of the Office of the Auditor-General, there really wasn’t anything to be said against such a measure to ensure, as ANC MP and Standing Committee on the Auditor-General chairperson Vincent Smith put it, that “every cent of taxpayers’ money must be (properly) used”.

Next up: Youth Day debate. These public holidays are ritualistically marked with a debate, scheduled for Tuesday as Parliament is on recess when Youth Day happens. If IFP MP Mkhuleko Hlengwa’s complaint about the average age of MPs were not deemed unparliamentary, the just over one-hour session would have been quite easily called a youth-less debate.

Just before lunch, the first prickly issue arose – it even went to a vote courtesy of the tjatjarige DA that wanted a proper appointment process – the last-minute extension of the Parliament Budget Office boss Professor Mohammed Jahed. That almost fell through the administrative cracks of a jam-packed parliamentary calendar, and to ensure continuity Jahed’s contract that would have ended on 3 June was extended to three months after the 2019 elections with a vote of 202 for, 65-odd against.

Lunch was called at 12:50, with strict instructions for everyone to be back in the House by 14:00 when Deputy President David “DD” Mabuza was up.

By then many of his Cabinet, released from their executive meeting obligations, filled the front benches of the House and it looked a little less empty. As has become the tradition at Presidency question time, National Assembly Speaker Baleka Mbete took the chair, straight from a lunch hosted by ANC Chief Whip Jackson Mthembu for some UK Labour Party MPs.

Usually the deputy president’s Q&A in the House gets its own afternoon, but on Tuesday Mabuza found himself squashed in. For some two hours his sonorous voice perfectly enunciated his pre-scripted replies – and also the impromptu responses to follow-up questions – eliciting barely polite applause even from ANC benches. Much of what he said on the national government’s intervention in troubled North West appeared like a cut-and-paste from previous Cabinet statements.

That the aircon faltered – Small Business Development Minister Lindiwe Zulu hauled out a lovely big yellow fan – didn’t help. But attention in the House was focused when AgangSA MP Andries Tlouamma asked Mabuza about the “politically aimed robbery” in North West and whether government’s intervention would actually be implemented or “handed to another faction of thieves”.

That got the ANC up on points of order to protect Mabuza from answering. And Deputy Speaker Lechesa Tsenoli ruled that the question amounted to casting aspersions – it wasn’t quite clear against whom aspersions were cast as no one was named – and needed to be withdrawn. Tlouamma declined and was told to leave: “There’s a door there next to you. Use it,” Tsenoli ruled.

Then it was on to another potentially prickly matter – the National Minimum Wage Bill, and the two concomitant amendments to existing labour laws.

The national minimum wage is contested not only by the South African Federation of Trade Unions (Saftu) and National Metalworkers Union of South Africa (Numsa) for falling short of being a living wage, but also researchers and civil society during earlier parliamentary public hearings.

Despite the rhetoric, it does not mean a monthly R3,500 income as this would depend on working 40 hours, which many of the most vulnerable workers do not do. And it’s also not a R20 per hour wage for everyone: farmworkers are pegged at R18 per hour, domestic workers at an hourly R15 and those working in public employment programmes at R11 per hour. Even ANC MPs acknowledged it was not a living wage, but a step towards it.

But it’s politics and in the run-up to an election there’s much at stake, not only for trade union federation Cosatu that has been criticised for failing workers by taking sides in the factional ANC battles. And so already on Monday evening Cosatu welcomed the passage of that draft legislation on social media:

But on Tuesday the clock was ticking well past 5pm as the debate on the trio of Bills ran on and on. ANC speaker after ANC speaker highlighted how the national minimum wage was a historic moment in the history of South Africa, with the governing party realising the promises of the Freedom Charter. Parliament’s labour committee acting chairperson Sharome van Schalkwyk put it bluntly in her debate contribution:

“The ANC promises. The ANC delivers… Vote therefore for the ANC in 2019!”

It went to a vote on two of the three Bills, with the DA and EFF, which opposed the legislation each for their own reasons, walking out to try to scupper the numbers. But the by then the ANC parliamentary seats were filled – and its majority ensured the national minimum wage draft legislation squeaked through with 202 votes in favour, just one more than the required 50 plus one, or 201 votes, of the 400-strong House.

At 17:35 Cosatu could finally celebrate, although passage through the NCOP is still required before President Cyril Ramaphosa, who as deputy president shepherded this initiative through over two years of consultations, can sign it into law. It’s somewhat later than the 1 May 2018 implementation date originally officially announced in February 2017.

There was more. But it was a case of paring everything back to get through a stack of work, with the odd political barb thrown in. It was finally all over just past 19:00. DM