Parliament: Zelda Holtzman to fight ‘trumped up’ charges that led to her dismissal 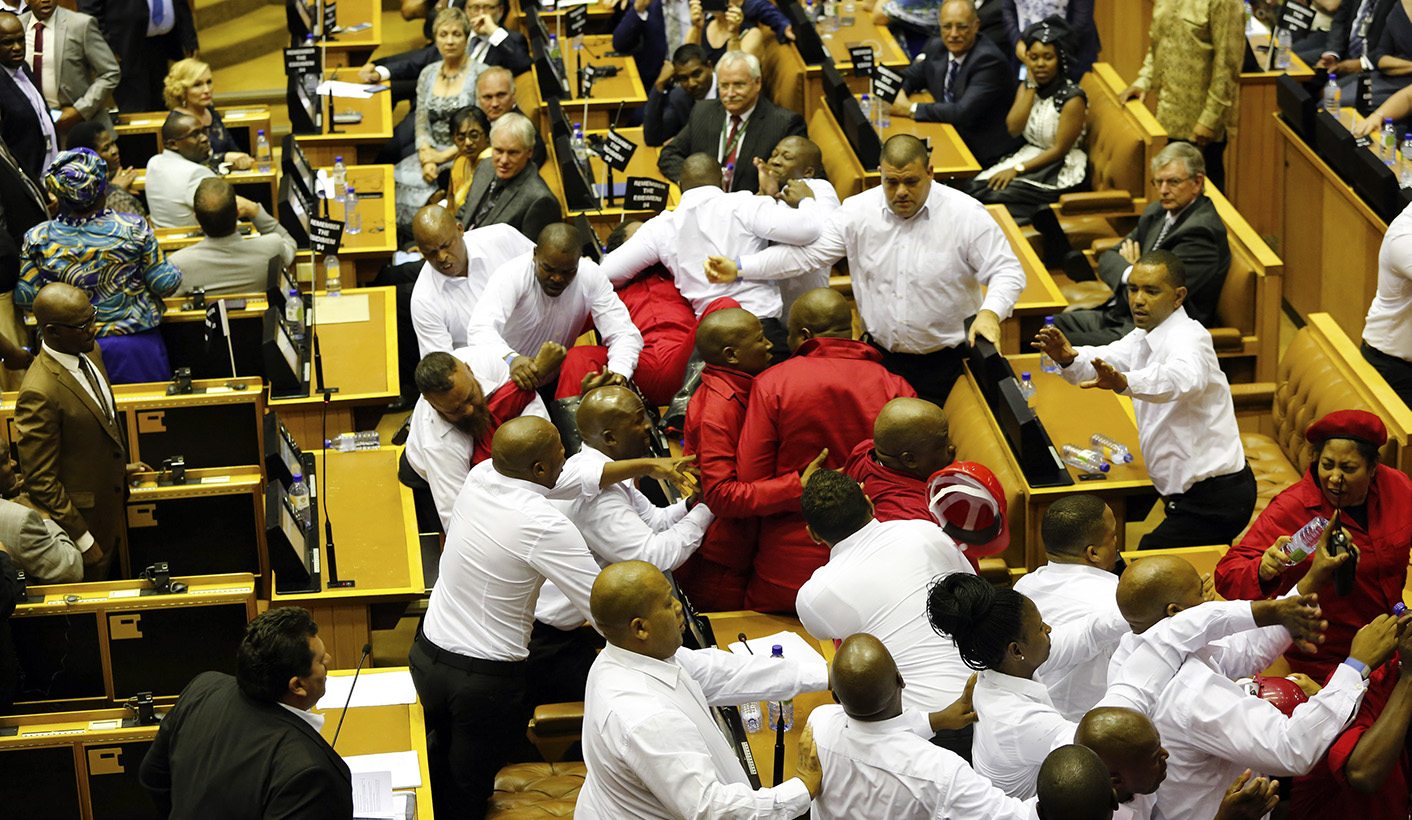 Zelda Holtzman is contesting her dismissal as head of Parliament’s protection services (PPS), it was announced this week after an over two-year disciplinary process. “It’s a natural response because of the injustices I have suffered,” she told Daily Maverick on Thursday, saying the charges were “trumped up”. And the issues she regards central to her removal, the Secretary to Parliament’s use of blue lights and recruitment of SAPS members into the PPS, remain unresolved. Her comments come as the Labour Court is set to hear PPS staff grievances over preferential salary and employment conditions afforded to those recruited from the SAPS. By MARIANNE MERTEN.

Zelda Holtzman did not mince her words: “The (disciplinary) process was used to avoid the fundamental issue – my report on the blue lights.”

“I raised that issue (of the blue lights) with the presiding officers a month before my suspension. I have not received even an acknowledgement of receipt,” Holtzman told Daily Maverick. “They were totally remiss in their responsibility. They were supposed to have an inquiry about that.”

Holtzman has been on suspension for longer than she’s been at work as PPS boss, a job for which she was head hunted.

In the first half of 2015 word emerged that Secretary to Parliament Gengezi Mgidlana repeatedly had requested official transport, with blue lights, for himself and relatives. When Holtzman and her deputy Motlatsi Mokgatla were put on precautionary suspension on 30 July 2015 the parliamentary grapevine buzzed with the soured relationship between Mgidlana and Holtzman and Mokgatla over the blue lights and moves to recruit SAPS officials to the PPS. Mgidlana has dismissed claims of wrongdoing.

As Mokgatla’s contract expired at the end of 2015 during his suspension, it was Holtzman who faced disciplinary proceedings. In mid-2016 it became public that she had been found guilty on four of the 12 charges – gross insubordination, insubordination, failing to resolve tensions in the PPS and failure to submit a business plan.

The independent disciplinary process resumed on 19 September with a hearing on the aggravation and mitigation of sentence at which Holtzman represented herself. It is understood there was a separate process to try to settle the matter. Or as Mgidlana told the Joint Standing Committee on the Financial Management of Parliament in May this year in reference to Holtzman’s case: “At this stage there is no resolution. It is still a pending matter.”

On 8 October 2017 the independent disciplinary inquiry recommended Holtzman’s dismissal on the insubordination counts and for failing to submit a business plan, while recommending a final written warning for not resolving PPS divisions. Parliament announced its decision to fire Holtzman on Wednesday.

This week the Right2Know Campaign (R2K) said it was convinced “attempts to dismiss Holtzman are ‘punishment’ after she blew the whistle against abuse of state resources”, citing concerns over Mgidlana’s “unauthorised use of ‘blue light’ vehicles and the securitisation of Parliament through the recruitment of police” to the PPS. “Parliament must respect whistle-blowers. In this country we have normalised corruption so much that we see outrageous attacks on whistle-blowers – from corruption-busting municipal officials to whistle-blowers, who act against corporate crime,” said R2K, also highlighting the “mysterious” theft of Holtzman’s documents from her lawyer’s office that contained evidence of possible financial mismanagement.

On Thursday Holtzman said she is not taking her dismissal lying down, and has decided to contest not only the sanctions, but also the guilty verdicts. This includes recommended dismissal for the failure to submit a business plan, which Holtzman maintained, was not her performance contract. She did what was required of her — and submitted a budget and strategic and annual performance plans for the PPS. “It’s not like I was sitting on my hands.”

The insubordination counts, for which dismissal also was recommended, obliquely related to the blue lights issue, but specifically to a failure to answer five questions from Deputy Secretary to Parliament (DSTP) Baby Tyawa. According to City Press, she had been asked by Mgidlana to inquire whether he was entitled to official transport. The findings of the independent disciplinary inquiry, seen by Daily Maverick, indicate it did not deal with evidence by Holtzman that by late July 2015 she was no longer responsible for “driving services” as this function was removed from PPS to Household Services, another division in Parliament’s administration. “(Holtzman), if indeed she was no longer in charge of driving services – could simply have informed the DSTP in response to the request,” it said upholding the gross insubordination and insubordination guilty verdicts.

On Thursday Holtzman pointed out that aside from steps taken against her, there have been no consequences. “The only thing he (Mgidlana) has done is to ensure he’s set in motion a process to get rid of me.” And this, she argues, is part of a concerning development – “what I call tyrannical” – across public administration and the state.

“Controls are used through administrative instructions to deflect from the real issues, from the transformation that should happen, from the delivery of services,” said Holtzman, also raising concerns over the securatisation of Parliament and democracy. “The way they utilised the white shirts and deployed serving police officers is actually problematic.”

It’s not that Parliament should not be secured, but the way this is being done in a democracy, she added.

The “white shirts”, or “bouncers”, is how the SAPS recruits into the PPS are colloquially known on and off the parliamentary precinct. Their role in evicting unruly MPs, usually the EFF, has meant scrutiny of them since recruitment, officially as chamber support staff, although they also attend committee meetings and accompany MPs on oversight visits.

And the so-called bouncers’ recruitment at higher salaries and better employment conditions is awaiting a confirmed court date at the Labour Court after a protracted legal out of court proceedings. After the SAPS members were recruited to the PPS in 2015 – at the time there was much talk within Parliament to boost security given disruptions in the House that also sparked a review of the rules – 72 long-serving PPS staff lodged a labour grievance.

Parliament’s spokesperson Moloto Mothapo on Thursday said there was no further comment to make on this matter. “(Parliament) considers it closed having gone through a thorough, just and fair process that was headed by an independent and disinterested chairperson,” said Mothapo. “ Ms Holtzman is fully aware of legal remedies/recourse, if unsatisfied with the process.”

Holtzman’s dismissal came as Mgidlana awaits the outcome of Parliament’s internal audit committee probe into various claims of mismanagement, including the blue lights, travel and bursary award, after an official complaint by the National Education, Health and Allied Workers’ Union (Nehawu). In early June Parliament confirmed its Secretary was on special leave pending the probe, and announced Tyawa as acting Secretary to Parliament.

It remains unclear when this probe might be finalised – aside from Nehawu, Holtzman was among those who briefed it and submitted documents – although Parliament’s Joint Standing Committee on the Financial Management of Parliament was informed in August that the investigation is being finalised, and that the audit committee would brief MPs on it’s completed report. DM

This article was updated at 4.30pm.

Photo: Members of Parliament’s protection services (PPS) – also known as the “white shirts” or “bouncers” – remove members of the Economic Freedom Fighters during the State Of The Nation Address (SONA) in parliament, on 09 February 2017. Photo: Sumaya Hisham/(EPA).

This article was the subject of a Press Ombud complaint and which has resulted in the Daily Maverick being sanctioned and ordered to apologise to Gengezi.

Daily Maverick apologies to Gengezi Mgidlana, the Secretary to Parliament, for not having given him the pre-publication opportunity to respond in person to claims made by dismissed Parliamentary Protection Services boss Zelda Holtzman in the article published on 12 October 2017.

Holtzman was quoted as saying that, “The only thing he (Mgidlana) has done is to ensure he’s set in motion a process to get rid of me.” She also called this development “tyrannical”, and labelled the handling of the PPS matters as “problematic”.

Mgidlana lodged a complaint covering a series of alleged breaches of the Code with the Press Ombud about this article, and one published two days earlier on 10 October 2017 on the outcome of the independent disciplinary process that recommended Holtzman’s dismissal.

Press Ombud Johan Retief in his ruling of 9 December 2017 found that “indeed Mgidlana was the subject of critical reportage … given the potentially harmful nature of the allegations made against him and the fact that most of them were new” – which meant that we should have asked him for comment.

He directed us to apologise to Mgidlana and to offer him such a right of reply.

While comment by Parliament was included in the article, specific pre-publication comment on this matter was not sought from Mgidlana, who was at the time on special leave he had requested pending an investigation into claims of maladministration and abuse of power by Parliament’s audit committee. For this Daily Maverick and its journalist Marianne Merten apologise to Mr Mgidlana.

“My ultimate conclusion is that Merten has prepared and presented her reportage in accordance with acceptable journalistic principles – except for not having asked Mgidlana for comment on the allegations levelled against him in the second article,” Retief said.

Visit www.presscouncil.org.za for the full finding.