Whose democracy is it anyway? Home Affairs’ chilling move on your money, and your freedom 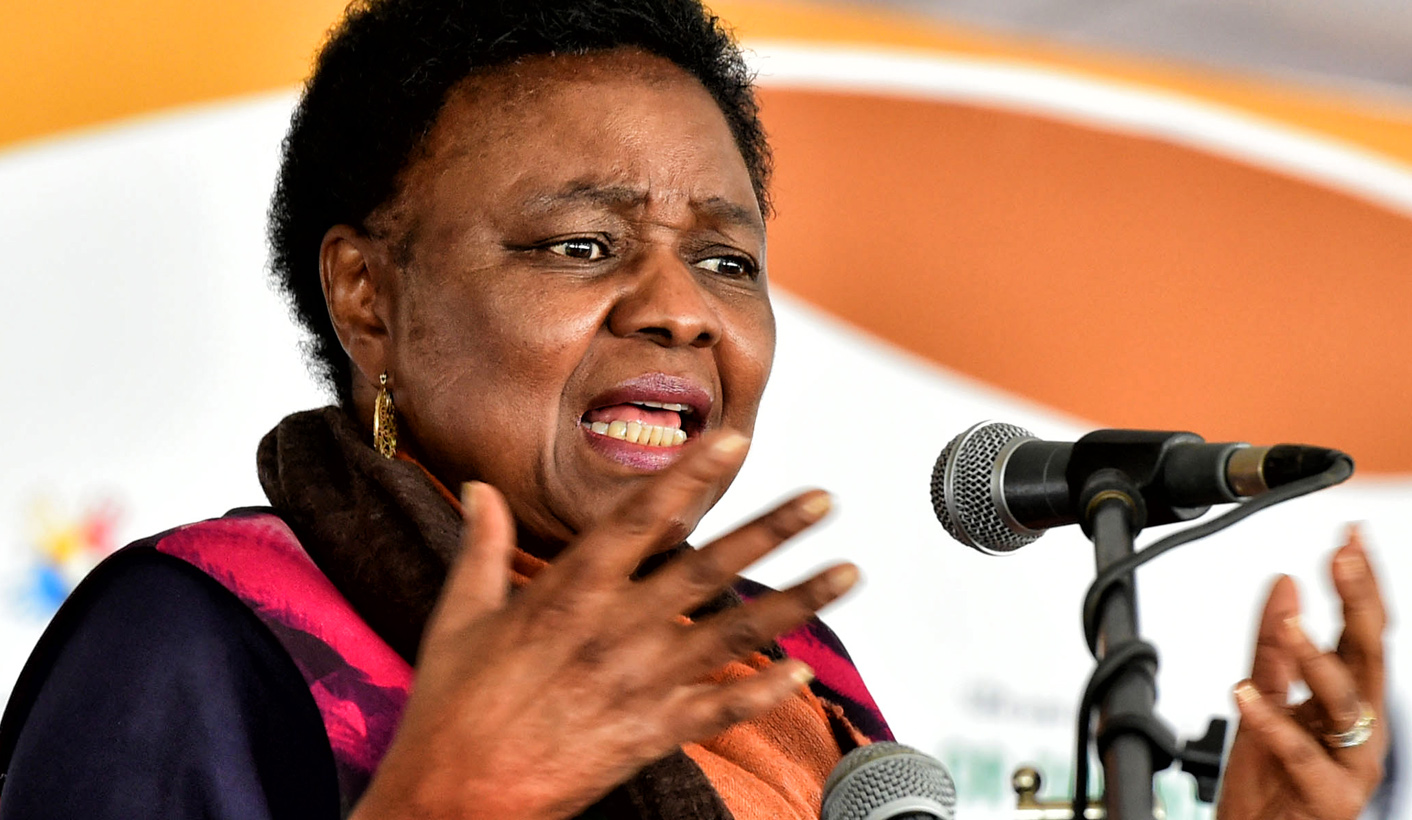 Within 10 years Home Affairs wants to be at the centre of South Africa’s security and economic development. To fulfil its vision, the department’s recently published discussion document proposes raising own funds by requiring institutions from public schools and hospitals, universities – but also banks, conveyance attorneys and airlines – to verify a person’s identity against a fee with Home Affairs’ biometric database before accessing services. The document also proposes raising funds through “identity verification provided to the commercial sector”. This move into the heart of government’s security cluster may just turn into a nightmare. By MARIANNE MERTEN.

The upcoming ANC policy conference will discuss what the governing party in its Peace and Security Discussion Document released earlier this year argues is the repositioning of a misunderstood administrative department into one “fully integrated into the security cluster” with its own fundraising capacity: “The sale of identity services and products would be another large revenue stream…” If the policy conference agrees, the issue will be up for adoption at the December ANC national and elective conference as an official policy of the governing ANC.

But the process of moving Home Affairs from the governance to the security Cabinet cluster has been well under way since early last year – the decision was reiterated in the Cabinet statement of March 1, 2017 – the party discussion process is now also replicated in state processes.

Home Affairs’ move from governance to security started when Malusi Gigaba headed the portfolio, and unfolded amid broader governmental moves also in legislation identifying “essential infrastructure” and “critical information infrastructures” for special protection and harsher penalties, and a change in language from safety and security to law and order. But it will be up to his successor, Hlengiwe Mkhize, to finish the move of Home Affairs into the heart of the state security apparatus.

With Gigaba now at the helm of the finance ministry, it also falls to Mkhize to see the actual implementation of the Border Management Authority (BMA), pivotal in the departmental repositioning of itself within national security. The BMA legislation was finally passed on the third try earlier this month, tagged onto the National Assembly’s Budget adoption session when ANC parliamentary benches were packed, unlike the other tries when walk-outs by opposition parties which have rejected the law caused a lack of quorum needed to adopt the law.

The BMA is sharply criticised for fragmenting customs and excise duty collection of an estimated R3-billion away from the South African Revenue Service (SARS), and for effectively putting Home Affairs in charge of security services such as the police and South African National Defence Force, which both, like SARS, were at best lukewarm in public hearings in the legislative process. Questions are also raised as to how agriculture, fisheries and health inspectors would be accommodated in this new authority.

In a Home Affairs budget vote briefing earlier this year, these criticisms were downplayed. Only 10% of custom and excise revenue would be affected as the overwhelming majority of monies was paid straight to SARS ahead of goods crossing the border – and a memorandum of understanding was now in place.

The discussion document confirms what emerged from the budget briefing: there will be no new, clearly identifiable border authority, and that instead the SAPS, SANDF, SARS and everyone else would simply co-ordinate their actions. “The BMA is based on the principle of integrating all units at an operational level, while participating departments retain full control over policy and legislation. With Cabinet announcing in March 2016 that the Department of Home Affairs (DHA) must be fully integrated into the security cluster, the DHA is now better positioned within the state to deliver against its mandate.”

Despite government’s focused drive for the BMA, it does not feature large in the discussion document on repositioning the department “as a backbone of the security system of the RSA (Republic of South Africa)”. Or as it is also put it: “A repositioned DHA with modern systems and a cadre of suitably qualified and trained professionals will be the nerve centre of the national security system.”

Most of the 31-page discussion document seeks to net together national security, managing identity and the economy. “The securing of our country against threats to its people, systems, institutions and capacity to provide for the nation. False identities are used by criminals and terrorists who not only harm individuals, but also the economy and job creation.”

Within this context much emphasis is paid to the department’s centrality to the digital economy. And it is in this hi-tech, digital economy space the drafters of the Home Affairs discussion documents spin words on the potential to generate its own funds given the long-standing National Treasury cost-containment.

Yes, fees currently charged for IDs, passports, birth and death certificates and other services could be adjusted. But the focus of revenue generation squarely falls on introducing an additional express identity vetting step in a swathe of services and commercial transactions like buying a house that are currently supported by the submission of certified copies of IDs.

“Official transactions that require identity to be verified, such as the transfer of a house or a vehicle, would attract a fee for a check against the National Identity System (NIS) on a cost-recovery basis.”

“If charges for verification of the above services were between either R1 or R4, then between R500-million and R2-billion could be collected at current volumes of the few transactions list above,” according to the discussion document.

But most of the own-generated funds from citizens’ identity would be made from the private sector, which would be given digital access to the NIS database. “The largest new revenue stream would probably be identity verification provided to the commercial sector. This could be in the form of fees charged for maintaining an interface with the NIS, charges for each verification and fees charged for incorporating a connection to DHA verification systems into hardware and software.”

Access would also be given to government for research and analysis purposes. “(This) would significantly enhance the capabilities of the state to plan, conduct research, monitor the impact of policies, deliver services effectively and manage risks,” says the discussion document.

Questions arise over potential and real invasions of privacy and protection of personal information as the discussion document simply states, without details, Home Affairs “must seek to protect and empower citizens though improving access to rights, efficient services and information, including their right to dignity and privacy” while also “not making a profit from providing a public service”.

Own revenue generation from identity verification services, like the move to be the backbone of security, is premised that there is an NIS, rather than the National Population Register that currently still has paper-based components. And this is premised that all South Africans are indeed captured on that NIS.

This in itself will be a massive job as, despite a decade of various turn-around strategies, modernisation initiatives and the tech updates that still leave Home Affairs offices countrywide quite regularly off-line.

Thousands of South Africans are not on the population register, or are captured incorrectly. Civil society organisations regularly recount children not being in school for want of an ID or birth certificate. There are accounts of young people not being able to gain employment, or access to higher education and training, because of the lack of an ID. Some years ago there was a spate of accounts of South African women unknowingly married to non-South Africans.

Given this, for those outside the proposed NIS net, be it due to bureaucratic failures or simply a lack of life skills of funds to get to the proposed future service centres, access to public services and run-of-the-mill commercial transactions may grind to a halt.

The discussion document acknowledges Home Affairs is unable to do its job, right now: “… as it is currently positioned, the DHA does not have sufficient capacity to enforce these laws or protect its systems”.

Little concrete emerges on how this would be fixed. Instead, the discussion document argues for the need of a White Paper for Repositioning the Department of Home Affairs, the policy foundation for future legislation. That legislation would establish that “the only legally recognised procedure to be used in official transactions must be affirming of identity and civil status by the DHA using the Smart ID Card or approved digital systems”.

Effectively, such a statutory verification requirement would then allow the levying of fees and charges to self-fund Home Affairs on the back of citizens’ identities and personal information the department holds as sole guardian. It’s neat sophistry. DM