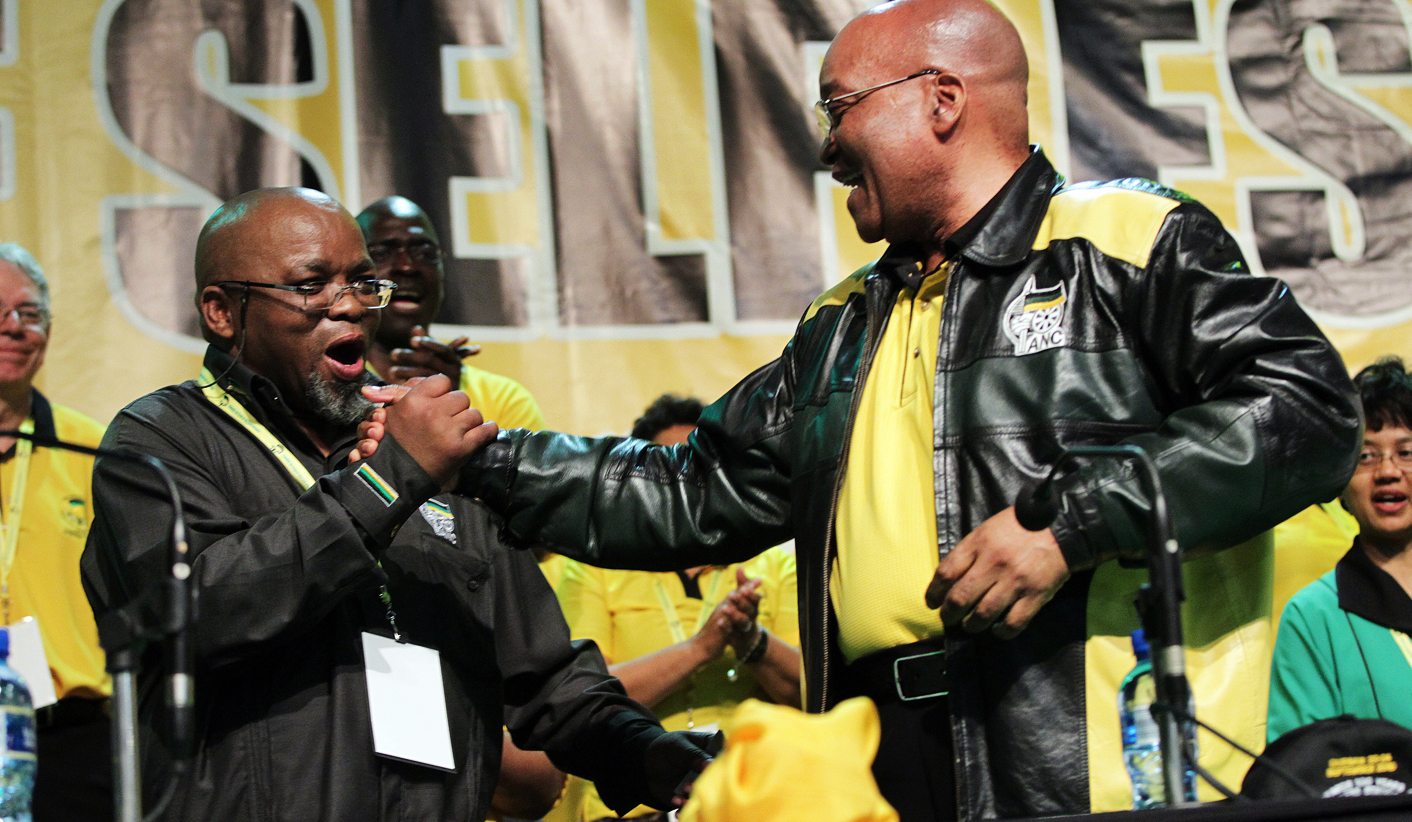 As the band gets ready to play and the curtains begin to twitch in anticipation of being raised on the African National Congress's (ANC's) national general council, it is hard to discern what the main theme or outcome of this event will actually be. That there will be power plays and factional battles, and policy debates is not in doubt. But, in another indication of the unique space the ANC is in at the moment, that could be a rather boring gathering. Despite the fact that it could, quite literally, determine the future of the country. By STEPHEN GROOTES.

ANC leaders like to remind excitable journalists that the national general council (NGC) is just a “review”, and it can’t actually take hard and fast policy decisions. It can only recommend that the conference, coming in a bit more than two years’ time, deal with it. However, it is the biggest gathering of the party between conferences, and thus provides the best chance for assessing who is up and who is down, what has been successful and what was not. Given that President Jacob Zuma seems to be heading towards the conclusion of his reign, and the next king or queen hasn’t yet been determined, there are plenty of tea leaves to read.

It is an indication of Zuma’s strength at the moment that he goes into this event with virtually no challenges to worry about. Five short years ago, things were very different. Back then, Julius Malema was very much an enemy, and he, and his ANC Youth League acolytes, were howling at the ANC establishment. It seems hard to believe now, but then it appeared his bid to nationalise the mines actually had support. He was challenging Zuma at every turn, and Fikile Mbalula really seemed to think he was going to be the next secretary-general of the ANC.

From the opening moments of the NGC, it was clear he’d lost the fight. Zuma gave a speech that included the line “Youngers must respect their elders”, and as his speech ended, Gwede Mantashe’s picked up on exactly the same theme. Malema had to be comforted outside the main hall by his mentor, Winnie Madikizela-Mandela.

The other burning issue at the time was media regulation. Back then, it was a real threat. In the most bizarre press conference Yours Truly has ever attended, Pallo Jordan (Dr Jordan, as he then was) took questions from two in the morning, claimed the ANC had given South Africa the internet, thanked a journalist from Die Burger for giving him Hendrik Verwoerd, and then suggested that any tribunal had to be independent of Parliament.

At the NGC before that, back in 2005, the main event was the showdown between Zuma and Thabo Mbeki. Zuma won a vote for him to stay on as an office-bearer in the party. That, of course, led to Polokwane, and all that followed.

The incidents at these events illustrate how they can be the start of certain trends, or dynamics within the ANC. The 2005 NGC showed the tension between Mbeki and Zuma was very real, that dynamic came to dominate the organisation in the following years, until the recall of Mbeki in 2008. The 2010 NGC started the process that saw Malema being expelled.

This brings us to the NGC that starts on Friday.

Compared to the previous two events, the lead-up to this NGC is relatively quiet. There does not appear to be any overarching dynamic that can help predict the outcome.

There are a few reasons for this. The first is that, as it is always risky to show your hand too early in any political scenario. If you are Cyril Ramaphosa and you didn’t get back into frontline politics just because you felt a little bloated while being a plutocrat, it would be foolish to look unreasonably ambitious at this point.

Secondly, some of the provinces that previously dominated the ANC through sheer weight of numbers, and thus allowed the people they supported to act with some latitude, are no more. KwaZulu-Natal, the source of Zuma’s strength for so long, is hopelessly split in its biggest region, eThekwini. The Eastern Cape, historically the backbone of the ANC, does not appear to have recovered from losing 500 of its branches during the run-up to the 2012 Mangaung conference. It is also facing the fight of its life in next year’s local government elections, with the very real prospect of losing the Nelson Mandela Bay Metro Municipality.

But the biggest reason why it all looks so quiet on the surface is that, for the moment, Number One is King Number One. He and his allies control the national executive committee completely. He has the power to easily snuff out any cheeky contestant, in fact so easily that there is no point in trying to stir up any trouble for him. To do so, would be to die one of those strange political deaths Zuma’s opponents often suffer one Sunday morning when they are least expecting it.

That doesn’t mean of course that there is not room for something unexpected. Perhaps the three most watched men this weekend will be the members of the ‘Premier League‘, Ace Magashule, David Mabuza and Supra Mahumapelo, the premiers and the ANC chairpersons of the Free State, Mpumalanga and North West, respectively. It appears they are beginning to have real influence. If there are any bold moves made at the NGC, they will most likely to come from them.

Then there are the two main contenders themselves, Ramaphosa and Nkosazana Dlamini-Zuma. Zuma may well use his influence to put Ramaphosa in the odd tight spot. Dlamini-Zuma may simply sit on the stage like a queen in waiting, smiling a lot and saying very little.

Mantashe is going to have a busy NGC; the man who used to be described as the most powerful in the country appears to have lost some of his aura. He is trying to get it back, but he may have to call on all of his bellicose diplomacy. Like everyone else, he also has to ensure he does not appear too ambitious.

Someone who seems to be flying under the radar at the moment is Zweli Mkhize, the ANC’s national treasurer. Apart from a rare foray on the radio to defend the party over the Chancellor House revelations last week, he has been relatively quiet. Clearly a waiting game is being played here, but he can look forward to the loving attentions of the telephoto lenses during the first big event on Friday.

And then, there’s what the NGC is supposed to be about. Policy. It often gets relegated to the back-burner these days, but this conference is supposed to be about, and only about, policy. Despite the furore over claims that dual-citizenship could be banned, it appears that very few fireworks are on the cards here. There will be the usual ANC rituals, the media is against us and must transform, the economy is still the economy of apartheid, we have not stopped factionalism and ‘slates’ in the party, and the forces of capitalism have suffered a historic retreat because of the great recession.

Perhaps more interesting will be what is said about external threats, those posed by the Democratic Alliance and Malema’s little outfit, along with anything said about corruption inside the party itself. One can also expect the odd little jibe at some Cabinet ministers. Faith Muthambi may be reminded that as an ANC deployee she is expected to follow a policy of encrypting television signals rather than going the other way, Tina Joemat-Pettersson may be asked to be transparent in the nuclear power deal, though this is unlikely. The real news this weekend is likely to come from the slight shifts in the discussion here, which could reveal whether anything in the party is actually going to change.

All in all, on the surface, Luthuli House could well be pleased to be entering an important conference like this, with things looking relatively peaceful. But that could well be only a mask, worn by those who do not yet want to reveal their true quest for power, in 2017. DM