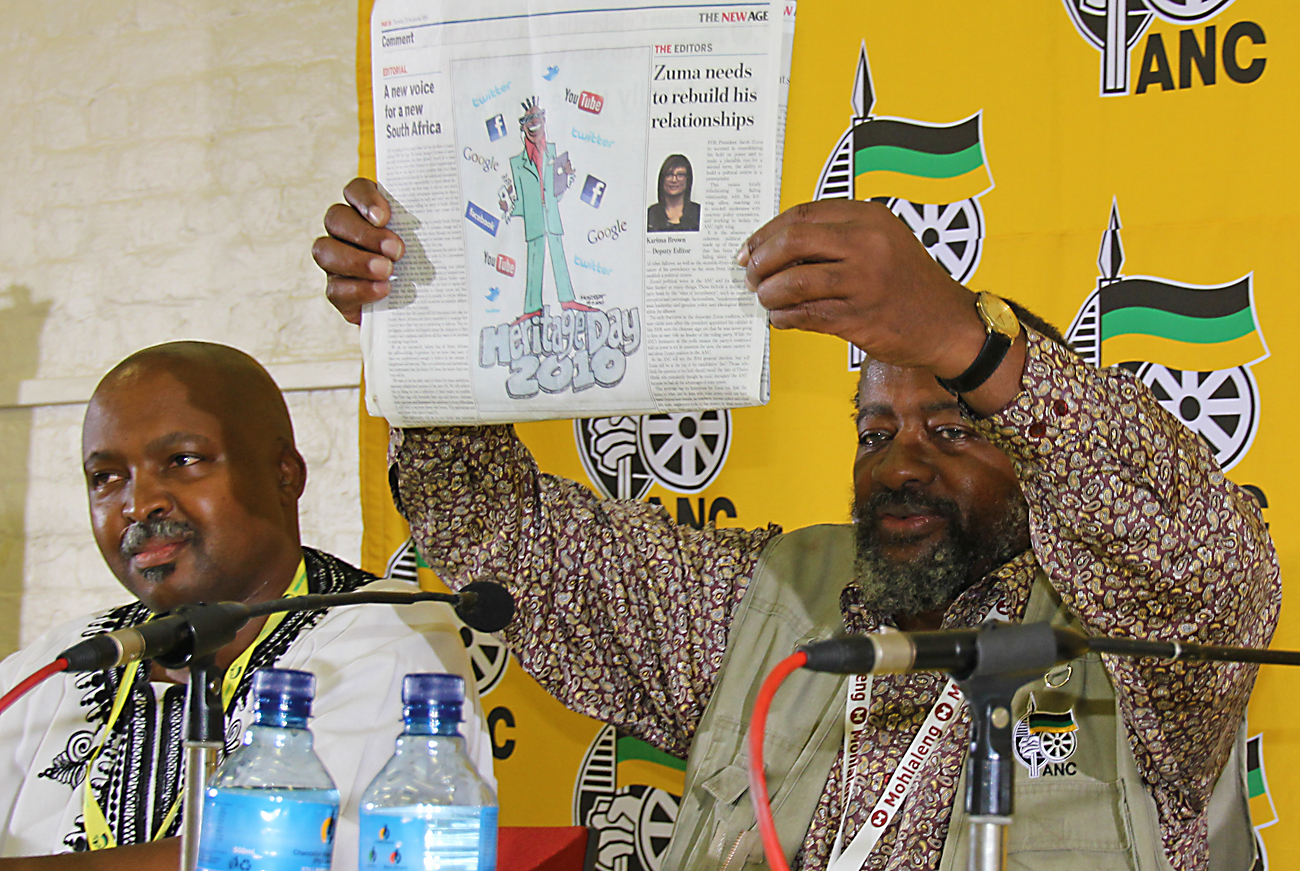 One feature of the ANC's bottom-up decision making is that bodies like its NGC have all the say, in theory. So now that the NGC has had its say on the media appeals tribunal, everything said by ANC leaders up to this point becomes null and void, and the NGC’s view reigns supreme for at least a couple of years. And what the NGC had to say about government regulation of media is almost entirely unlike everything ANC leaders have said to date. By PHILLIP DE WET and STEPHEN GROOTES.

There were some remarkable scenes in the media ghetto on the outskirts of the ANC’s national general council meeting in Durban on Thursday night and early Friday morning, as journalists were finally briefed on the outcome of discussions in the media committee.

Despite the late hour, old hand Pallo Jordan cheerfully took on journalists in defending the ANC’s track record on media freedom, declaring the local media landscape to have fundamental problems and dismissing concerns about media restrictions as hysterical.

That is a scene that has played itself out many times in recent months, at various debates and discussions and seminars around the country. This time, though, it was different. With Jordan in charge the whole thing had the atmosphere of debating club rather than mortal combat. Perhaps that was because Jordan had a trick up his sleeve. He presented a resolution which included the media appeals tribunal, but did not make it central – and contains some provisions that makes the body seem almost benign.

The resolution, as presented to journalists verbally, is a thing of diplomatic beauty for all its clumsy wording, and is worth considering in full. Here is the text:

The existing self-regulatory system (Press Ombudsman and Press Council) is ineffective and needs to be strengthened to balance the rights of the media and those of other citizens, guided by the values enshrined in our bill of rights, for example human dignity, equality and freedom. The commission affirmed the call for Parliament to conduct a public enquiry on:

a) balancing the rights enshrined in the Constitution, like rights to dignity, freedom of expression and media, guided by the values enshrined in our bill of rights, human dignity, equality and freedom.

b) enquiry on transformation of the print media in respect of a [black economic empowerment] media charter, ownership and control, advertising and marketing and the desirability of the establishment of a media accountability mechanism, for example the media appeals tribunal.

c) the media accountability mechanism [should be] in the public interest including the investigations into the best international practices, without compromising the values enshrined in our Constitution

d) on what regulatory mechanisms can be put in place to ensure the effective balancing of rights, this may include self-regulation, co-regulation and independent regulation. Any media accountability mechanism, should be independent of commercial and party political interests, should act without fear, favour and prejudice, should be empowered to impose appropriate sanctions and must not be pre-publication censorship.

In preparation for this enquiry, the ANC will itself submit to Parliament its own submissions.

Let’s start at the beginning. The ANC will give Parliament what amounts to an instruction (given its majority) to consider the desirability of a media appeals tribunal. Which the ANC has made abundantly clear it considers desirable, so consider the establishment a done deal, never mind Jordan’s technically correct protestations that the legislature can do whatever the hell it pleases, including throwing the whole concept out.

However, in the very same breath the NGC has added a number of restrictions on the nature of such a body and how it should operate. Keep in mind that this is a Parliament that once considered removing the word “independent” from the name of the Independent Communications Authority of SA (Icasa), the broadcasting the telecoms regulator. Icasa, which though often incompetent and bungling, has stayed clear of controversy when it comes to actual content, is clearly the model the NGC had in mind.

Independence isn’t easily defined, of course. Baleka Mbete always claims Parliament is independent, and thus it should appoint a tribunal as the representatives of the people it will serve. That is hogwash, and an ANC-aligned tribunal chosen by an ANC-dominated Parliament with a mandate to further the causes of the party is one of the great fears of media institutions. During the media scrum after his official appearance, Jordan said Parliament should not appoint the tribunal, because a way must be found to make it more independent. That would represent a major shift in ANC thinking, and could be the one change that makes newspapers sign up to the project.

Also important is the continual invocation of the Constitution. Questioned about the outpouring of foreign concern about the ANC’s apparent determination to regulate the media, Jordan said those statements were nuanced. “As far as I’ve been able to make out, not one has said ‘this is wrong’. They have said South Africa has a good Constitution, and whatever institution you create should be consistent with the values of that Constitution.”

Take a step back from the detail, and the whole thing actually amounts to a retreat from the fiery days of ANC spokesman Jackson Mthembu’s let’s-arrest-journalists approach. This resolution is very similar to what was agreed at Polokwane, a political epoch ago. That does not, by any stretch of the imagination, represent progress on the part of any dark forces within the ANC that want the media gagged.

Suddenly, in what we will henceforth refer to as the post-Pallo era of the media tribunal, the idea looks like a typical ANC storm, the type we’ve seen around several issues before. Lots of sound and fury, with the media (including us) reporting on those who shouted the loudest and seemed to represent the greatest threat. When it came down to it, though, pragmatism won the day. Because even if such a body is considered to be “desirable” there’s still the hurdle of “feasible” to get through.

Parliament is a strange place sometimes. But its recent track record is such that it’s only when there is real political will driving it that something can happen fast. The death of the Scorpions is the obvious example. We don’t see that strong, united political will here. Not yet. That could change, but until it does, we see the issue of the media tribunal taking a long, leisurely tour through the land of position papers, public hearings and redrafting. What comes out the other end, far into the future, is highly unlikely to please the Mthembu-style firebrands.

There are plenty of other things in the NGC discussions and resolutions for the media industry to be worried about – on a corporate level. The ANC intends to let slip the competition hounds on the entire newspaper printing industry, on suspicion that there is anti-competitive behaviour afoot. The party still wants its very own newspaper, some day, which will surely draw a lot of lucrative government advertising away from other papers. Black economic empowerment targets in the newspaper business will probably be among the highest around, if ANC negotiators get their way.

Whatever the ANC believes, though, none of those issues will have a tangible impact on the editorial side. They do not threaten the watchdog role of the media, at least not directly. They are nothing more than the everyday hazards of doing business in South Africa. DM

Photo: Pallo Jordan brandishes the special Heritage Day edition of The New Age, while making a point on how media-friendly ANC rule has been. The Daily Maverick