The curious case of the ANC’s post-Marikana silence 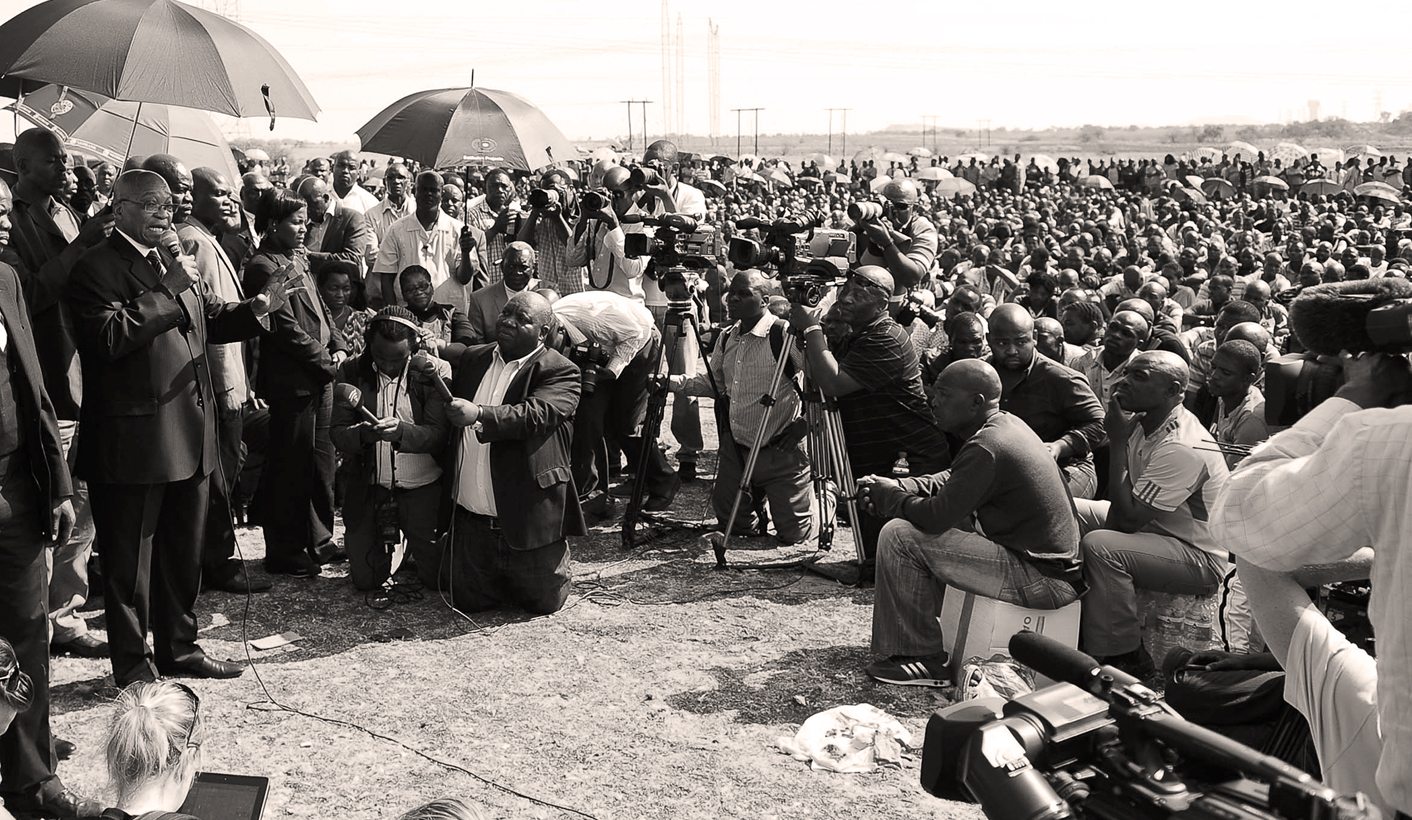 The last five days of South African history have been about Marikana. The fallout from the Farlam Commission’s Marikana Report is such that no matter what the report said, it was always going to dominate every Sunday paper there is, and every radio newscast going. People have been queuing up to have their say, from Mmusi Maimane's DA to Julius Malema's EFF, from every police expert with a South African connection to NGO after NGO. And yet the most powerful, the loudest voice, the organisation with the biggest and most effective reach in the country, has remained almost totally silent. The ANC has said absolutely nothing. In fact it is almost as if it is in another world. By STEPHEN GROOTES.

On Friday last week, Marikana was on everyone’s lips. Except the ANC, who was ‘celebrating’ the 60 years of signing of the Freedom Charter. Its leaders stood up to talk about the past, which is pretty much all the party does at the moment. On Monday, it was exactly the same, an Alliance summit was underway. At one point, most Twitter timelines were talking about the EWN Marikana debate, while the @MyANC_ info feed was tweeting pictures of President Jacob Zuma meeting the Cuban Five (a group of Cuban intelligence agents who were caught spying in the US).

In the days after the release of the report, the ANC has said just one thing; in a brief non-statement it said simply that it once again sent condolences to the relatives of those who died, and made a call to South Africans not to let the issue divide them. Since then, nothing.

The ANC is a party that involves itself in every single aspect of our society; it’s had views on everything from rugby selection to art appreciation (along the way it has even issued comments about school debating teams). Wherever there is a debate in society, the ANC is there, from the role of judges, to the economy, everything.

But to mention Marikana is to touch it on its blind spot.

Going back to the days after the massacre, it’s clear the ANC has actually always been like this. It has never found anything sensible to say on the issue, and thus it ignores it. At the one-year anniversary of the event, every sector of society was there except for the ANC. Even the CEO at Lonmin was there, and spoke briefly. But the ANC said the North West ANC would make a decision, and the North West ANC, being the North West ANC, cocked it up (we’re talking about a provincial party that went through a five-year period of not being able to agree on anything).

Going further back, to the ANC’s Mangaung Conference, just a few months after Marikana, and it was as if Marikana had simply never happened. At the time this issue hung over Cyril Ramaphosa like Omar al-Bashir over the AU summit. And yet, it was mentioned probably once. That is all. And Ramaphosa was elected deputy ANC leader.

It’s interesting to consider why the ANC is so silent. Normally, when Luthuli House’s communications team decides to maintain radio silence, it’s because it is the only course of action open to them. Because to answer almost any question about Marikana is to invite trouble. And almost every step along the way to Marikana sees a governance mistake by the ANC.

Of course the first name to pop into your head is that of the deputy leader of the ANC, Cyril Ramaphosa. Certainly, he is the person who is named most often. The report, quite rightly, does not find that he bears legal liability for what happened, but he hardly looks like he did the right thing at the time.

Then we need to look at the parties against whom findings were made. Of course, the National Police Commissioner General Riah Phiyega is the most prominent. Zuma, not anyone else, appointed her. And Zuma has still not bothered to share with us his reasons for this appointment. Nowhere has there been a cogent explanation for why a gifted manager was going to be better than someone who actually understood how the police worked.

But of course Phiyega can’t, and shouldn’t, bear total responsibility for the police failures here. It is surely part of the police culture of militarisation that this happened. Step forward Mr Bheki Cele. A man who was found to be unfit to be a police commissioner, but is somehow fit to be a deputy minister. Which is a bit like realising you can’t appoint someone to be a national director of public prosecutions, but keeping her on as a deputy anyway. Of course Cele was also Zuma’s appointment.

Then we have the role of the National Union of Mineworkers (NUM). There again, a member of the Alliance, and findings were made against it. The NUM’s clever response to this was to label Association of Mineworkers and Construction Union (Amcu) leader Joseph Mathunjwa a “pathological liar”, instead of dealing with its own problems.

All of these are simple mistakes of governance. It was probably foreseeable they were mistakes that would have consequences, police experts had said back in 2006 that the Public Order Policing units had major problems, literally everyone outside Luthuli House has said Phiyega is not the right person for the job, the NUM had never found a way to manage AMCU.

But even if that is the case, it’s interesting to think about how Luthuli House would deal with this, if the person implicated were not Number Two, but Number One. Presumably, Wikipedia would be consulted, and amateur videos involving firefighters would be brought in by some poor minister to explain how it was not his fault.

There will be many people, perhaps including some who have first floor parking at Sauer Street, that think it doesn’t matter that the ANC is staying silent on all of this. So what, they may say, this will all blow over. Well, perhaps it will. But by being a spectator and not a player, the ANC is giving up power here. It is simply leaving the playing field to others, and they are using it to their own advantage. One of the most significant events of the platinum strike last year was that for the first time a non-ANC actor was able to radically affect the economy, as Amcu was able to put a severe dent in economic growth. The ANC has done nothing to neutralise Amcu since then, and that surely means it’s actually lost a bit of power over the last year.

It seems unlikely that the ANC is going to break this Marikana silence anytime soon. It is clear that it really has nothing to say.

Perhaps, just perhaps, this is the political equivalent of hanging your head in shame. DM