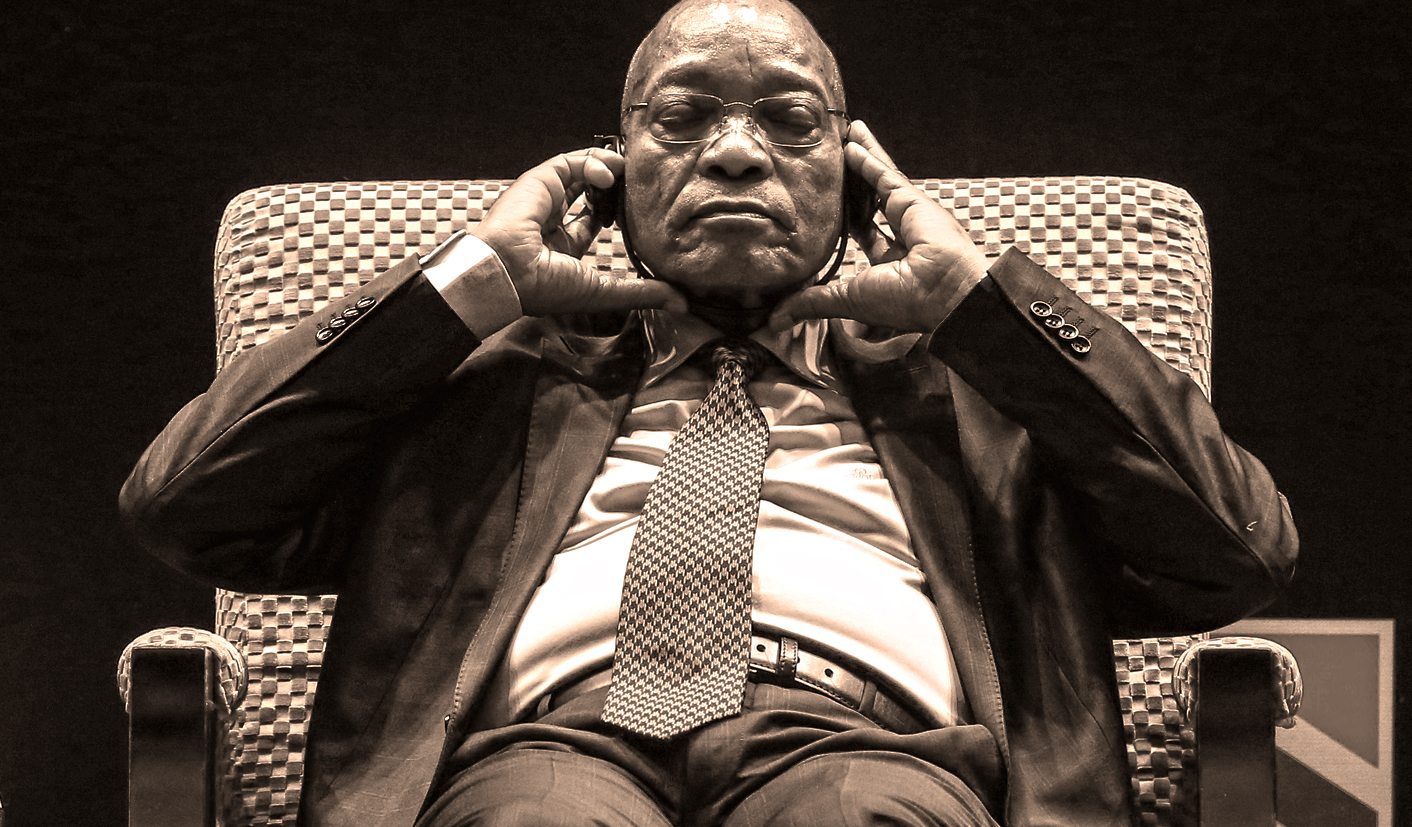 Of course President Jacob Zuma was never going to pay back the money. It was just a matter of how he would wriggle out of doing so. He roped in the services of a hapless henchman, Police Minister Nkosinathi Nhleko. Nhleko perspired and mumbled his way through a 51-page document that can best be described as an assault on human intelligence to excuse his boss from paying for upgrades at his Nkandla homestead. On the other side of the country, Sports Minister Fikile Mbalula was sticking his wet finger in the FBI’s ear to dispute South Africa’s involvement in the Fifa World Cup bribery allegations. Class acts these, and no doubt pleasing to the chief joker himself. By RANJENI MUNUSAMY.

Poverty of politics. Remember that line: Poverty. Of. Politics.

It was President Jacob Zuma’s declaration of triumph over the opposition during an animated performance in Parliament, taunting those who had tried to pin him down on Nkandla. In his response to the presidency budget debate on Wednesday, Zuma dressed down opposition parties saying they had no substantial issues to raise and nothing to offer.

Hence the preoccupation with the security upgrades at his Nkandla residence, he said. “Some people who could not pronounce Nkandla, they have learnt.” Then mimicking a posh English accent, Zuma said, “Nkaaandlaa, Nkaaandlaa, Nkaaandlaa,” sparking uproarious laughter among ANC MPs.

He also mocked Democratic Alliance (DA) leader Mmusi Maimane over the ‘Broken Man’ speech he delivered during the State of the Nation Address debate in February. “If you listen to our good friends‚ the opposition… heh heh… you will think you live in another world, Zuma said. “There’s a broken president in a broken country… Jirrr!”

“It emphasises the poverty of politics in our opposition parties,” Zuma said, deriding how “serious matters” are interrupted by constant points of order – a jab at the Economic Freedom Fighters (EFF).

Twenty-four hours later, it was apparent why Zuma was so triumphant. He knew it was a matter of time before his minions would be telling the world that the expenditure on his Nkandla home was justified, rendering the opposition’s campaign to get him to ‘Pay back the money’ unsuccessful. It was a message to convey that all the commotion over the past few months and tactics to try to hold him to account had come to naught.

You have to hand it to Zuma though, he has turned getting off the hook into an art form. Had he simply refused to reimburse the state for non security upgrades at Nkandla, as had been recommended by Public Protector Thuli Madonsela, it would forever be his cross to bear. By batting the responsibility to someone else to determine whether he should pay back the money or not, it would be that person’s burden to carry.

Police Minister Nathi Nhleko was the ideal candidate. Less than a year in Cabinet, completely beholden to the president, and in the portfolio responsible for the security of the state, he was able to shovel up spadesful of twaddle to counter Madonsela’s recommendations.

The key line in Madonsela’s 447-page report was that the president should pay a “reasonable percentage” of the cost of the measures that do not relate to security, and which include the visitor’s centre, the amphitheatre, the cattle kraal, the chicken run and the swimming pool. The key line in Nhleko’s 51-page report was “Accordingly, the State President is therefore not liable to pay for any of these security features”.

To get to that, Nhleko had to stitch together an assortment of nonsense and present to the media incredible explanations for categorising the “undue benefits” described in Madonsela’s report as “security features”. So months after the term “firepool” was dismissed as a silly pretence for the building of a R2.8 million swimming pool, Nhleko reintroduced it into the lexicon. It is an “open water source” to fight fires at the homestead because the water supply to Nkandla is erratic‚ has low pressure and often runs out.

The pool’s secondary use at the homestead is recreational. Apparently. The minister does not know whether, while waiting for a fire to break out, people have swum in the pool. To back up the lofty and detailed descriptions of the tremendous fire fighting capacity of the pool that Nhleko was sweating through, a video was shown with fire fighters demonstrating how they would pump water out of the pool. As water cascaded from the fire hoses onto an imaginary fire, dramatic opera music played – as it does when water is turned into wine or swimming pools transmute into fire fighting apparatus.

The cattle kraal and chicken run are also security features, Nhleko went on. The kraal is not just a place where cows mooch about and take a dump. It’s a place of “spiritual and cultural value”. And if the cattle do mooch about in the main security zone, they would set off false security alarms. Similarly, there are “free running chicken”, and these “needed to be confined to a chicken run outside the high security zone and away from the Perimeter Intrusion Detection System (PIDS) fence technology”.

You see why you had to part your hard-earned cash to pay for all this, Citizen Taxpayer? Fence technology man. Who can argue with that?

The president gets a lot of visitors. Not you, obviously, but “locals who have complaints, grievances or problems for the attention of the president”. He also gets visits from former presidents and people from the Panel of Elders or Panel of the Wise. There are so many people coming to feed off the president’s wisdom, not only now but beyond his term of office, that “crowd control” measures are needed. Therefore R6.7 million for a visitor’s centre is deemed to be “fruitful expenditure”, said Nhleko.

Nhleko borrowed from Wikipedia to explain the necessary design of the amphitheatre for stepping walls for people to sit comfortably. “The theatre would normally have electrical points to provide for entertainment or sound system in an appropriate stage,” Nhleko quoted. “This has been so since the ancient Roman times,” he went on to say – because the ancient Romans needed somewhere to plug in their electric guitars.

The design of the amphitheatre is to assist with soil retention – the movement of sand is a huge security threat to presidents and any ancient Romans visiting Nkandla – and does not provide a hideout for would be intruders.

And for all these reasons, Madonsela was obviously horribly mistaken to conclude that the firepool, cattle kraal, chicken run, visitor’s centre and amphitheatre were undue benefits. It is in fact “inescapable” that they are security features, Nhleko said. He also said the scrutiny on the Nkandla upgrades had violated Zuma’s rights.

The security measures at Nkandla are inadequate and therefore more upgrades need to be conducted on the state’s tab. Nhleko’s support act at the media briefing, Public Works Minister Thulas Nxesi said he did not know how much this would cost.

By the time the minister announced that Zuma did not have to pay a cent towards the upgrades, the president was on his way to Nigeria on a working visit and to attend the inauguration of General Muhammadu Buhari. The mission was accomplished. The monkey is off his back. It is Nhleko who looks like the clown, not him.

But Nhleko is in good company.

In the wake of a massive international scandal over bribery and corruption in Fifa, Sports Minister Fikile Mbalula trotted out to counter allegations that South Africa paid a bribe to win the bid to host the 2010 World Cup. He addressed a media briefing, attended by local and international journalists, without reading the indictment released by the US Attorney General implicating South African bid committee members in the scandal. The FBI thus quoted him around the world while swimming in sweet ignorance about the details of the allegations under investigation.

But that did not stop the effusive minister from belting out gibberish. “We didn’t run a picnic or a spaza shop. We ran a proper process,” he said. “If FBI wants South Africa one way or another to be involved in the investigation, they know what to do.”

On the allegations that a bribe had been paid to sway the voting in favour of South Africa’s bid, Mbalula said: “I don’t know 10 million dollars. I have not seen it with my eyes. But I’m told it can fit in a suitcase.” Because nothing proves the country’s incorruptibility than a minister, who was not even in government when the bid was won, being oblivious of how many bank notes fit in a suitcase.

“We have never acted in Hollywood,” Mbalula said, “But we are told we are the main actors in this movie. We must be fully respected.”

Two monumental corruption scandals. Two jesters leading the charge to shut them down. Serving up hogwash, they undermine the public’s intelligence and turn our country into a joke. In the theatre of the absurd, we are made to be the fools.