Ray-Bandits: Who are the real vandals of the Sea Point Promenade? 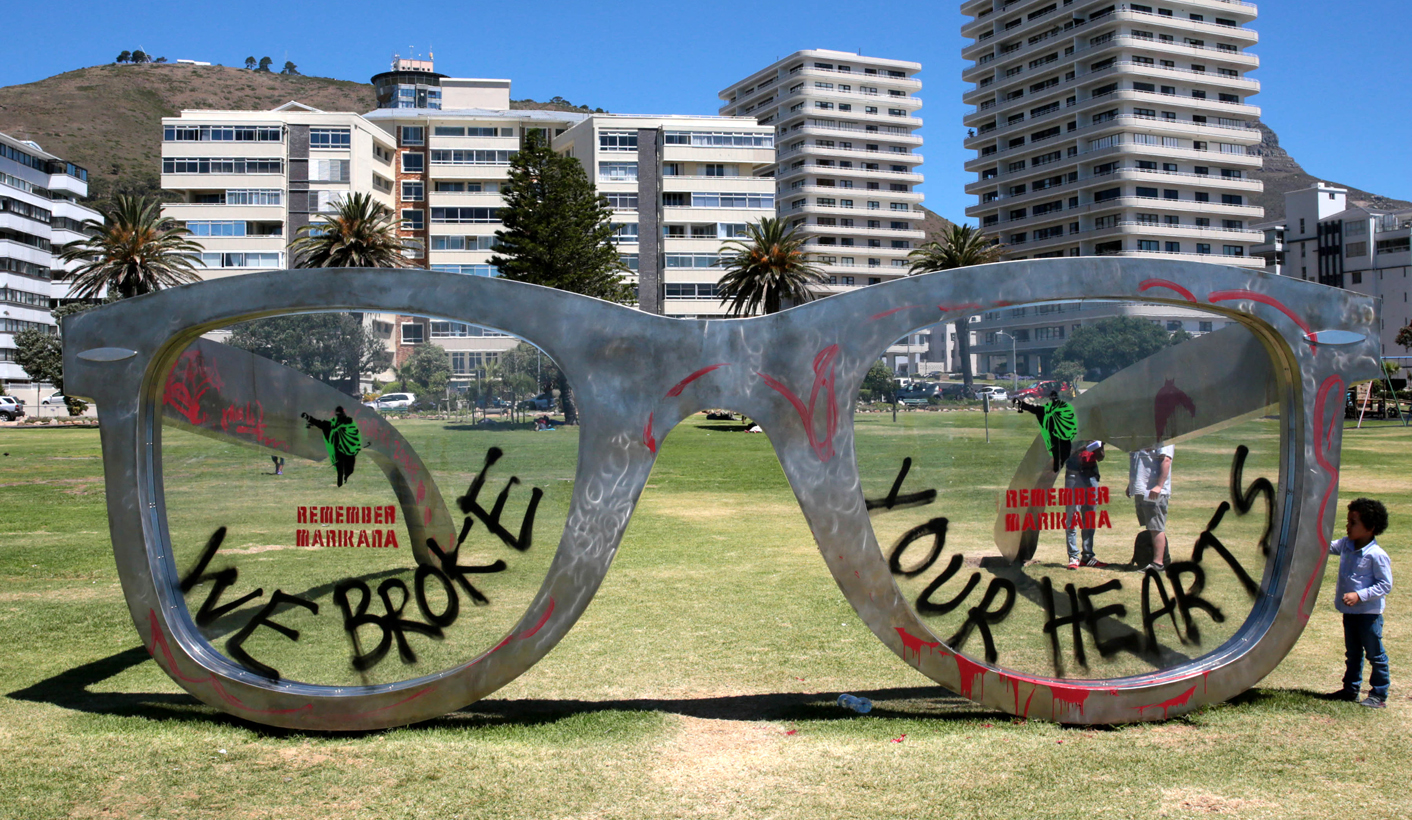 On Monday night, the hulking pair of Ray-Ban sunglasses, installed on the Sea Point Promenade under the guise of public art, was given a very public blow: it was vandalised. Or was it? By REBECCA HODES.

Michael Elion’s piece, ‘Perceiving Freedom’, has been the source of copious derision since its installation on 6 November. The print and social media have been alive to its mercenary treatment of Mandela’s political legacy. “The bullshit files” was the opener of Duane Jethro’s response to the piece, while Richard Poplak dismissed it as an “art-vertisement”. My take was that the sculpture and its placement were examples of “corporate vandalism”: the misuse of one of Cape Town’s most crucial public spaces for private gain: both the artist’s and his sponsor’s.

What irked critics most was Elion’s invention of a link between designer spectacles and Mandela’s political ‘perceptions’ while imprisoned on Robben Island. The information board explained the work as a ‘sculptural tribute’ to Mandela, and featured a picture of him wearing a pair of sunglasses with the obvious inference that they were Ray-Bans. The work’s description, laden with arcane rhetoric, explained that it ‘looks out in contemplation towards Robben Island and sets up an axis and dialogue with our nation’s history’. What remained unclear to many was how an outsized pair of Ray-Bans was to achieve such an ambitious feat, geometric and discursive, aesthetic and ideological.

Photo: The information board that accompanied the original installation of Elion’s sculpture. It has since been removed. Photo: Rebecca Hodes

Perhaps art54, the curatorial collective charged with the selection of public art for the Promenade, insisted that the information board be taken down. Committee members of art54 have themselves decried and distanced themselves from the work.

Perhaps it was the City of Cape Town that insisted on the information board’s removal. It was under the City’s ultimate jurisdiction that it was installed. The City’s political leaders, with their own lived histories of the anti-Apartheid struggle, were potentially cringing at the parallels drawn between Elion and genuine icons of South African democracy in the information board.

Or perhaps it was even Ray-Ban that insisted that the board be removed, in reaction to the negative publicity it received on Facebook and Twitter from Cape Town ‘creatives’ – street artists, photographers, activists, and even a sharp-tongued executive from Ogilvy.

It is one of these groups that have been blamed for the ‘vandalism’ of the work in the early hours of the morning on Tuesday 18 November. Numerous sources reported that the guerrilla graffito group, Tokolos-stencils, had claimed responsibility for the ‘damage’ done to the sunglasses.

Tokolos-stencils posted images of the graffitoed sculpture on Tumblr on Tuesday morning, but whether the street art collective has been formally, criminally implicated, is unclear. Because the work was stencilled, in part, with graffito publicly available on the Tokolos-stencils website does not mean that its members did the spraying. Perhaps the video footage captured by the City on its Promenade cameras will offer further clues, although it is likely that those responsible concealed their identities with hoodies and scarves, the universal accessories of activist chic.

Or at least I hope that they did. A stint in a South African jail might seriously crimp one’s artistic sensibilities, although, ironically, inmates have been the subjects of definitive works of post-Apartheid photography.

Whoever is responsible for ‘defacing’ the sculpture, they risked arrest and criminal charges by doing so. And for that, this citizen at least is grateful. Because when a work of public art mangles history so severely, and so apparently for private gain, the public has a responsibility to respond.

Of course, the rules of decent public engagement apply. It is for this reason that last week’s fracas in Parliament was such a debacle, because violence was afforded legitimacy. Not just on South African streets, where violence is an ever-present reality of criminal and police conduct, but in Parliament, the gilded seat of political respectability. It is for this reason, also, that the killing of miners at Marikana has been the focus of national and global opprobrium. The rules of engagement between the police and the public – premised, ostensibly, on protection – were violated at Marikana with catastrophic consequences.

When it comes to public art, the rules of engagement, beyond the imperative of non-violence, are flexible. The Ray-Bandits, whoever they were, did not resort to the silliness or the scatology of Avant Car Guarde, another South African art visual art collective whose works have both delighted and infuriated the public. Instead, the ‘vandalism’ of the Elion’s work is explicitly political, and it is a valid response to the political posturing of the original work.

As a nifty jungle-gym, the work might have passed. After all, the ox-waggon jungle-gym that has long stood in one of Sea Point playgrounds has been allowed to stay. The structure references the Great Trek, and in its alignment between the paraphernalia of childhood and the historical commemoration of the Trek, there are some politics at play.

The ‘ossewa’ jungle-gym, a symbol of the Great Trek, on the Sea Point Promenade (Photo: Rebecca Hodes)

Elion’s work pretended to be about democracy, but it was really a case of an individual and his corporate sponsors doing damage to public property, spoiling the commons, for personal gain. And that, by any other name, is vandalism. Ironically, it is through the opposition that the work has inspired, including its ‘defacement’, that it has been a force for political participation and engagement – the shared objectives of both public art and democratic citizenship. DM

Photo: A boy stands next to the Nelson Mandela-inspired giant spectacles entitled Perceiving Freedom on Sea Point promenade after it was defaced with words such as “Remember Marikana” and “We broke your hearts” by guerilla graffiti artist group Tokolos Stencil Collective, an anonymous group of stencil and graffiti artists, activists and other concerned citizens in what they call “white supremacist corporatist art”, Tuesday, 18 November 2014. Created by artist Michael Elion, in conjunction with the City of Cape Town as part of World Design Capital 2014, the art work is said to be a tribute to Mandela. Picture: Nardus Engelbrecht/SAPA