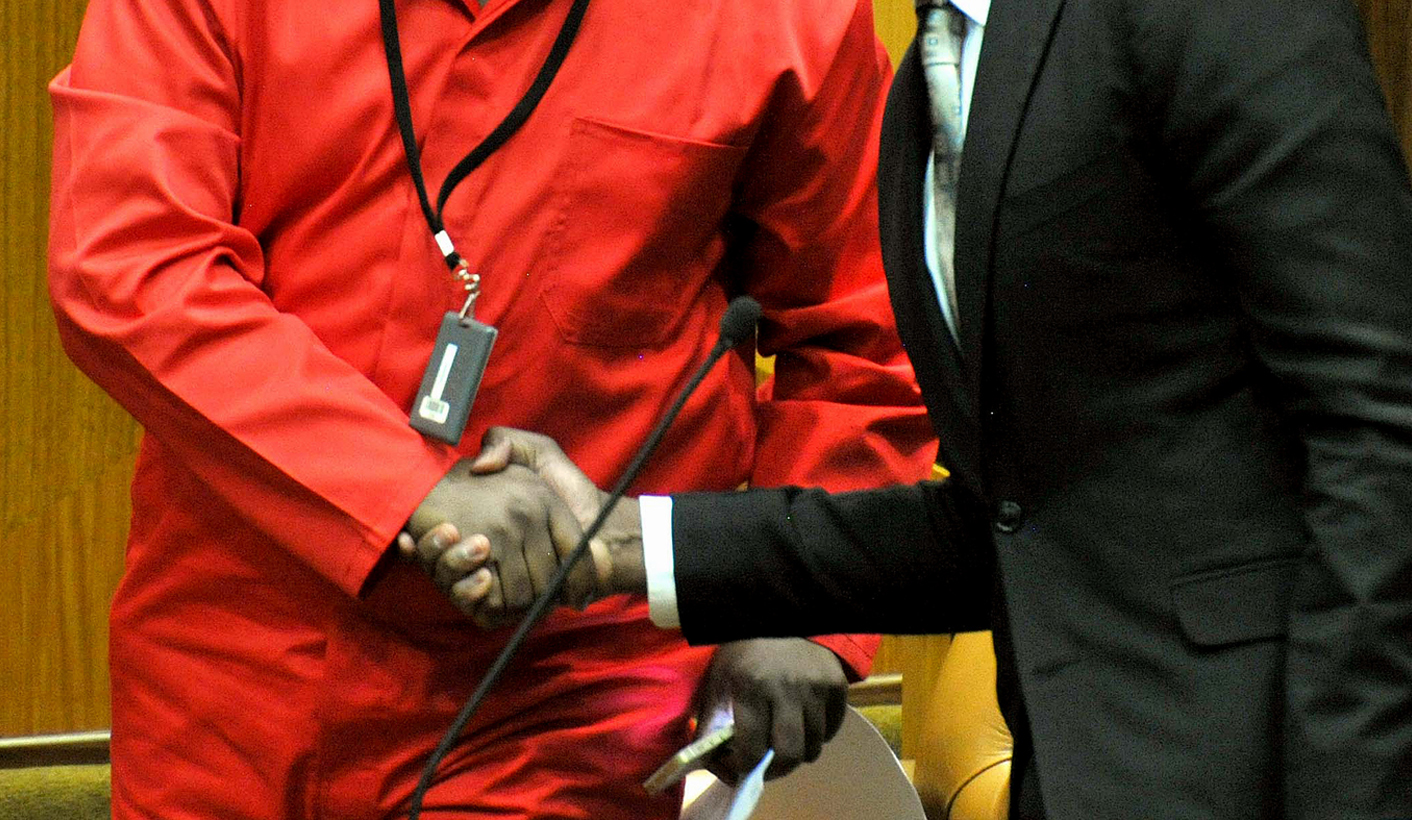 Thursday 13th November will surely go down as one of the most inglorious days in the history of South Africa’s democratic parliament. After almost seven hours of ultimately futile filibustering from opposition parties, the National Assembly adopted the report which essentially exonerates President Jacob Zuma from wrongdoing over Nkandla. If that weren’t enough, the evening descended into chaos when riot police were called into the House and proceeded to assault MPs. By REBECCA DAVIS.

Those were the words of DA parliamentary leader Mmusi Maimane, speaking to the Daily Maverick just around midnight on Thursday, after a day of sheer chaos.

With journalists having left the House after seven trying hours of opposition filibustering, riot police were ordered into the National Assembly to forcibly remove a female EFF MP who refused to retract statements calling President Jacob Zuma a thief and a criminal.

Ngwanamakwetle Mashabela, having announced several times that “Zuma is the greatest thief in the world”, sat defiantly behind the podium, ignoring acting Speaker Cedric Frolick’s demands that she retract her statements and leave the National Assembly.

One of the clearest conclusions to emerge from the day’s events was that the EFF parliamentary caucus are by no means dependent on leaders Julius Malema, Floyd Shivambu and Andile Mngxitama, all of whom were absent for the session.

When the Sergeant at Arms failed to budge Mashabele, the call was given – by whom, exactly, remains unclear – for riot police to enter the House. At this point the parliamentary TV feed was cut off, with the last words audible being Mashabela reiterating: “I don’t want to be touched”.

According to Maimane, when the riot police entered, DA MPs took it upon themselves to block their path.

“We felt it was a violation of the Constitutional order,” he said. “It breaks down the social contract we all got into. If they can call in the police today, it could be the army tomorrow.”

A skirmish between DA members and the police followed. During this time it appears that at least five DA MPs were assaulted.

During this time, Maimane claims that ANC ministers were “swearing at everyone and insulting the opposition”, to the point that fistfights almost broke out between individual MPs.

The violence in which the night culminated had been simmering from early on in a generally volatile parliamentary atmosphere. Earlier in the day, Minister of Small Business Lindiwe Zulu had to be physically restrained from entering into a brawl with EFF whip Godrich Gardee, her former MK comrade.

It was clear from the start that it would be a trying parliamentary session. At the outset, surveying the MPs vying for her attention in the National Assembly, Speaker Baleka Mbete said candidly: “I actually don’t want to recognize anyone [to give them the opportunity to speak].”

Conflict raged almost immediately, with Mbete attempting to limit the initial section of the session devoted to MPs’ motions to 45 minutes. Invoking a rule that permitted her to do so in “unforeseen” circumstances, Mbete cited the length of the agenda as motivation for circumscribing the motions.

But this didn’t fit with the opposition’s plans. Opposition parties were prepared to settle in for a lengthy filibuster – a tactic more often seen in US congressional politics – to try to delay the adoption of the Nkandla report. If the opposition had managed to delay matters sufficiently, the hope seemed to have been that ANC MPs would leave the National Assembly and the ruling party would have had too few members to form a quorum to vote through the Nkandla report.

DA and EFF MPs protested that there were no unforeseen circumstances in place, since parties had discussed the programme that same morning.

“You have pushed us to the brink of a constitutional crisis,” DA Chief Whip John Steenhuisen told Mbete, accusing her – not for the first time – of taking orders directly from ANC headquarters. “You must go!” cried DA and EFF MPs, united for the first, and not the last, moment of the day.

After ANC Chief Whip Stone Sizane also expressed consent for the motions to go ahead without limit, Mbete backed down.

What followed was the longest session of members’ motions in the history of the National Assembly, as Parliament later confirmed.

There were numerous mentions of the security upgrade on Nkandla. The House should debate “the use of amphitheatres as security features”; the chicken coop, and the swimming pool. The EFF’s Godrich Gardee put it most plainly: “I move that this House congratulates President Zuma on being exonerated on Nkandla”.

ANC MPs, meanwhile, were in similarly obstructionist mood, objecting to even seemingly benign motions – such as one wishing footballer Mark Fish a speedy recovery following his heart attack.

One MP issued a plaintive plea to the House to debate “how we should morally regenerate ourselves”.

The parliamentarians had, she said, “morally degenerated to the point where we are a laughing stock of those that elected us”.

The farce continued. Deputy Speaker Lechesa Tsenoli, who had relieved Mbete of her duties by this stage, began to tap clenched fists on the podium nervously.

The House should debate whether Tourism Minister Derek Hanekom would consider turning Nkandla into a tourist attraction.

“We have to be reasonable,” pleaded Tsenoli at one point. Later: “You are really cheapening the House.” Later, too, the plaintive: “Just for a change, just behave.”

But eventually the moment could not be delayed further, and the House moved on to the first order of the day: the debate on the parliamentary ad hoc committee report on Nkandla.

The DA’s Maimane referred to the parliamentary committee, which opposition politicians walked out of, as an “ANC study group” who had produced a report full of “denials, half-truths and fallacies”. The President’s cattle have a better life than the people of South Africa, he said, to the accompaniment of ANC MPs crying “Majority rules!”

The EFF’s Makotiu Khawula termed the President a “disgrace”. The IFP’s Narend Singh lyrically explained that the committee had “protected one man, but opened up a wound in our nation that will bleed forever”. The UDM’s Bantu Holomisa called for a forensic audit. The FF+’s Pieter Mulder brandished a laminated picture of Nkandla and called President Zuma the “luckiest man in the world”, for winning a R1-million lottery “246 times”.

It fell to ANC MPs Doris Dlakude and Mmamoloko Kubayi, both of whom sat on the Nkandla committee, to launch the most spirited defences of their work. Dlakude blamed the opposition for their refusal to participate in proceedings. Kubayi lashed out at a DA caucus which she said was “in tatters”, alleging that there is factional lobbying for MPs Diane Kohler-Barnard and David Maynier to replace Maimane as parliamentary leader.

Despite the opposition parties’ vocal disapproval, the Nkandla report easily passed on a vote: 210 yes votes to 103 no votes. With this business finally disposed of, seven hours later, most journalists opted to forego the remaining orders of business on the programme – assuming the day’s greatest dramas had passed.

After the scuffle with riot police, Maimane – who said “in no parliament in the world can police enter these chambers” – appealed to the House for calm, and proposed that the evening’s proceedings be suspended.

ANC Chief whip Stone Sizane concurred, telling the gathered MPs: “We have agreed there is no possibility that we can speak to each other”.

The session was adjourned, though it was clear that tensions were still running high – with DA Chief whip Steenhuisen taking to Twitter shortly afterwards to call ANC Youth League organizer Bram Hanekom a “little sniveling rat-ass lickspittle” after Hanekom suggested that opposition parties were needlessly celebrating the events of the day.

Maimane told the Daily Maverick that the DA expects the executive, the Speaker and the Minister of Police to account for the decision to deploy riot police into the House.

“It simply can’t continue business as usual,” he said. DM