Ars Longa: How to turn Cape Town into the art-vertisement capital of the universe 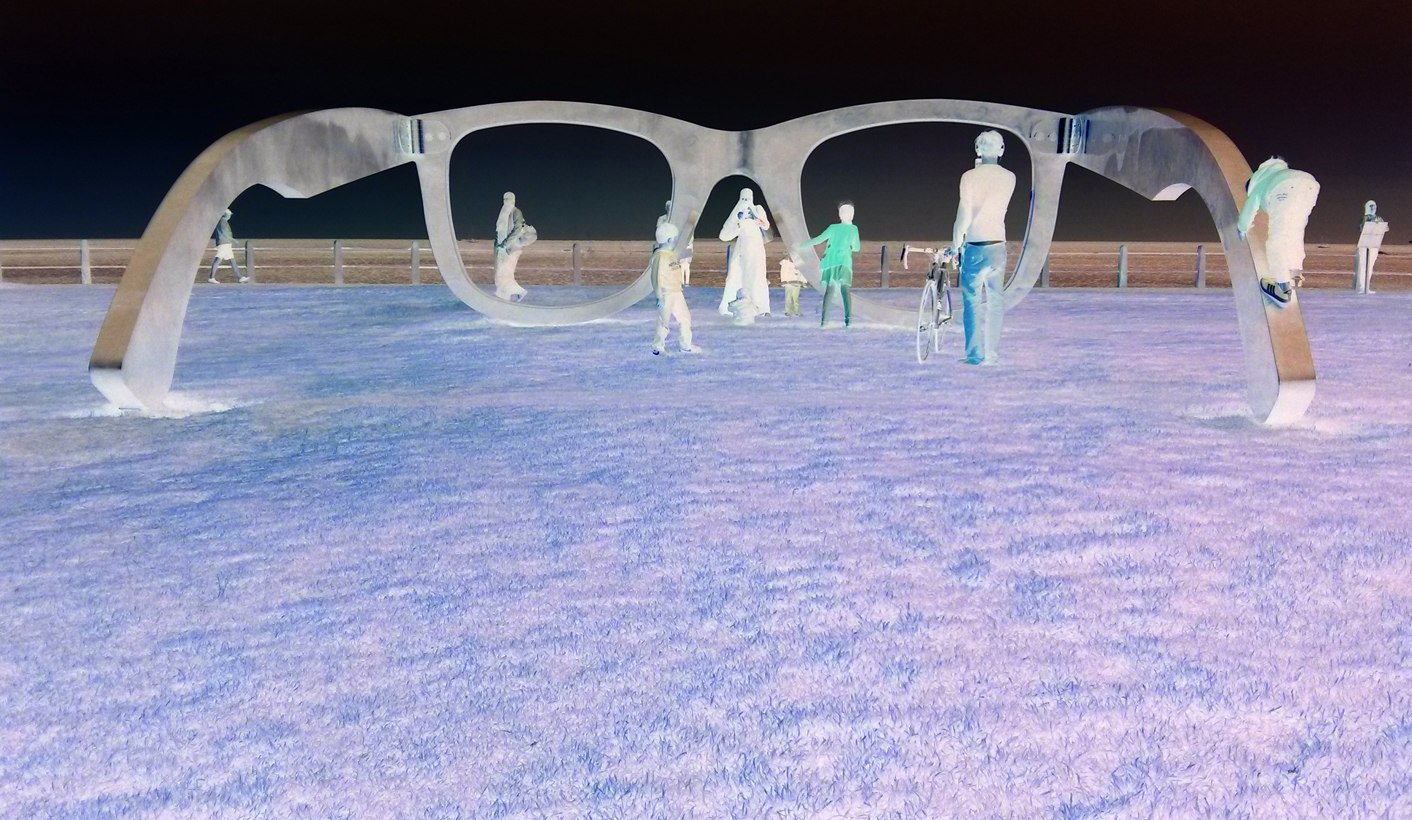 Last week, the city of Cape Town was gloriously transformed into an outdoor art gallery by the multi talented art-chitect Michael Elion. So muscly and precocious is this playful young Michelangelo-in-the-making that one almost runs out of hyphens/backslashes when conjugating his vast CV. He has worked alongside leading international superstars like Daniel Libeskind and Pierre Huyghe, both of whom have conspired to make the world a place with more inscrutable glass buildings in which nothing fits. Elion’s own work, which ingeniously incorporates rainbows and hearts and other icons usually found in text messages from teenaged girls, is now beautifying the Mother City, an urban design space previously under assault from graffiti “artists” with no Masters degrees.

In Elion, Cape Town has found a blue chip artist-in-residence to call her own. Finally, the sun-kissed residents, blonde hair photogenically tousled by the sea-borne air, can consume art as wholesome and organic as the veggies from Crush. And if Elion has created a signature piece, one that has left all of Jan van Riebeeck’s old port-of-call agog with its subtle effervescence and esprit, it must be his “Perceiving Freedom”. This large-scale installation on the Seapoint Promenade, a work of art immediately embraced by several South Africans of all colours, reminds us (with a refreshing lack of art-school dialectics) that Nelson Mandela wore designer shades, and that you should, too.

As deft at ordering around welders as he is with a drafting pencil, Elion has erected a massive pair of Ray Ban-branded sunnies gazing out at the timeless beauty of Robben Island. Stare through these oversized glasses—a gentle, winking homage to an identical project by a different artist in Denmark—and see the world just as Madiba once did. The work conjures the very essence of our Tata, and makes manifest his memory in a way that embraces the playfulness and joy that all who inhabit Cape Town insist are the city’s hallmarks.

Predictably, a work this important has come in for mild opprobrium from the usual philistines. Some have noted that Madiba did not, in fact, wear Ray Bans, and that he suffered significant damage to his eyes from the sun and the wind that so bedevils Robben Island Museum’s international visitors when they alight for a tour. But this mulishly ignores the fact that had Madiba worn Ray Bans—and a man with his fashion consciousness would have embraced the brand—his vision would have remained unmolested. Others object to the fact that Elion’s work is nothing more than a big-ass, historically exploitative billboard for a luxury brand slapped in a park that could otherwise be employed as public space. But the world’s greatest artists have always required the munificence of great patrons—Leonardo da Vinci took a stipend from the Catholic Church—and Bosch & Lomb are a respectable multinational that has never knowingly experimented on humans. What’s more, if Elion had wanted poor children from marginalized communities playing soccer on the Seapoint Promenade, he would have put some there.

As any artist is aware, sour grapes never get any sweeter. As a pointed reproach to Elion’s detractors, “Perceiving Freedom” has opened up a whole world of artistic possibilities for Cape Town—public art created by appropriately educated, DA-approved artists employing positive messaging from the private sector in order to transform the city into a place of creativity and passion.

In the same spirit of civic engagement and play, we would like to suggest several like-minded works of art we hope to see studding Cape Town in the near future. As most educated art lovers understand, art has always been about bridging an idea with a brand, in order to show the viewer what she doesn’t know she didn’t know, but now knows she knew before not knowing it.

In a stroke of generosity and reconciliation, it was recently suggested by a number of local heavy hitters, including mayor Patricia De Lille, that the man who helped bring an end to apartheid should have a road named for him. Table Bay Boulevard would be rebranded in honour of the Nobel Laureate, and the ex-prez under whom only a few tens of thousands of people died in state-sanctioned racial violence would finally be on Google Maps.

How about AfriForum, the Afrikaans business lobby group that has so vigorously involved itself in many of the debates of the day, help turn FW de Klerk Boulevard into a “Retro Street”? Flagpoles could fly the old flag of the republic, while cheerful white cops in restored Ford Escorts could police the byway, always ready to hand out lollipops to kids whose daddies who had a bit much to drink after Sunday lunch, and now require a stern warning and a sip of coffee from a communal flask. Just for old times-sake, there would be the odd arbitrary arrest and detention of those who don’t “fit the bill” of the traditional Cape Town resident.

In an even-handed and non-judgmental way, “Retro FW de Klerk Boulevard” would remind us of the fact that South African history does not begin in 1994, and in fact stretches back four centuries. Much like “Perceiving Freedom”, it’s pointedly non-political, inclusionary, and user-friendly.

South Africans are famously hospitable, especially to those visiting us from elsewhere in the continent. This performance art installation both reminds us of the severity of the Ebola epidemic raging in Zimbabwe, as well as providing us with a timely and winking reminder to keep our hands germ free. Travellers hopping off flights from the north would be greeted by cheerful arts students garbed in Hazmat suits, and handed a tube of PURELL’s fabulous Instant Hand Sanitizer product, now available in a number of scented varieties. The installation is a big, smiling Sawubona delivered to our foreign friends by the friendliest people on Earth.

Slap-bang in the middle of Cape Town, an enormous twenty-storey working model of a Weber Braai, complete with braai tongs and charcoal. This work of sculptural art would remind South Africans of the lip-smacking activity that brings all members of this nation—regardless of colour or creed—together on weekends and on holidays. The inauguration, to take place on Heritage Day (more commonly known as Braai Day) would see the world’s largest piece of boerwors lowered onto the grill from a helicopter piloted by Helen Zille. Vegetarian options would, of course, be available upon request.

Just as “Perceiving Freedom” functions as a loving homage, this huge-scale project is inspired by the work of Christo and Jean-Claude, who have wrapped up Central Park, the Colorado River and the German Reichstag in order to become immensely famous. In this case, the entire expanse of Robben Island would be swathed in Louis Vuitton’s iconic Monogram canvas. The choice of material is a knowing conceptual wink at the rising standard of living in the Western Cape under the DA, and a reminder that good governance leads to the better things in life. This is not just a project aimed at the one percent, but an aspirational statement that leads us all to the promised land of the V&A Waterfront, where the united residents of Cape Town come together to shop.

From the nation’s best-loved paint brand comes an entire reimagining of Khayelitsha, the unsightly township that forms the lone blemish on Cape Town as travelers come in from the airport. What if the entire settlement was painted in the bright whites and blues of the famous Greek island of Santorini, a splash of Hellenic flair at the bottom of Africa? Nothing spells “vacation” more than a Greek Island, and the Khayelitsha reimagining would nudge Cape Town further down the route to becoming the number one holiday destination in the world. In consort with Dulux, Khayelitsha would instantly become one of the city’s best-loved locales, where the smell of a traditional Greek seafood braai would mingle with the more traditional smells of chisa nyama.

This, we believe, is the future of Cape Town, one of the world’s leading design capitals, and a citadel of art. As “Perceived Freedom” has proved, there will always be those on whom the subtler messages embedded in sophisticated works of conceptual art are lost. We must be patient with them. As for the rest of us, we owe Michael Elion a big, rainbow-tinted thank-you. Ars longa, vita brevis, as the saying goes. Art is long, life is short. Elion’s beautiful, beautiful Ray Bans will be with us for eternity. DM

Photo: The Ray-Ban advert installed on the Promenade under the auspices of Art54 (Rebecca Hodes)