Crime, xenophobia and a struggle to live: A Somali woman’s story 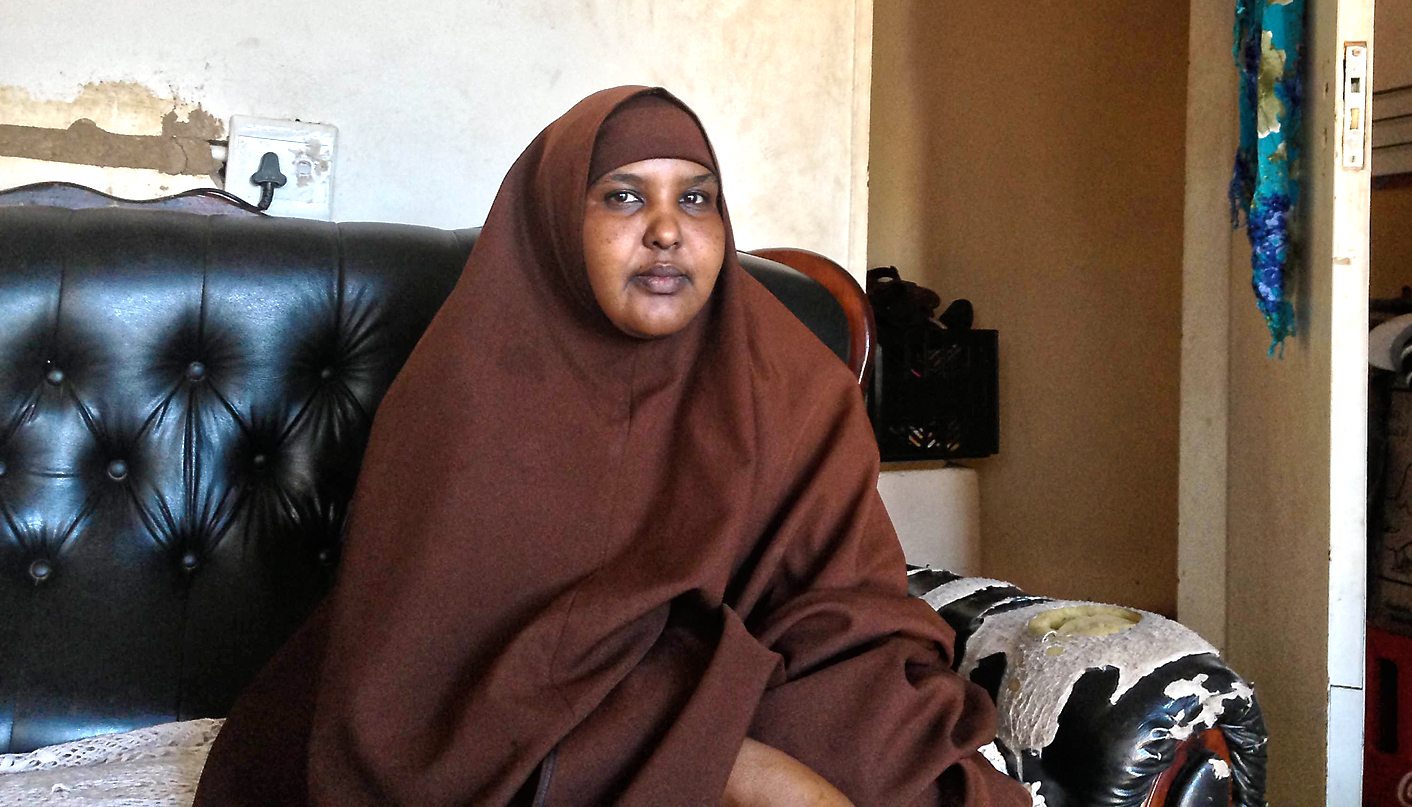 Government insists the scenes of looting and violence against foreign nationals in Diepsloot last week were acts of criminality and not inspired by xenophobia. Yet the experience of foreign nationals in South Africa is certainly not untouched by xenophobic sentiment. KHADIJA PATEL spoke to a Somali woman who is one of the owners of the Diepsloot store where two Zimbabweans were killed last week.

Amina Hassan Abdi is one of four owners of the store in Diepsloot that was the scene of looting and violence last week. Two Zimbabwean men were killed in the store by one of Abdi’s partners. He insists he suspected them to be thieves. That shooting, however, inspired a wave of violence against foreign nationals in Diepsloot. Abdi insists that in all her time in South Africa, she’s never seen anything like it.

“We are here, only me and my brother and my children,” she begins.

Her husband left South Africa in August 2011 to return to Somalia.

“Last month, on the 15th, he passed away. Somebody killed him in Kismayo.

“It’s very difficult because now it’s [almost] two years since I live here [alone, without my husband], so now I’m waiting and every day I’m waiting and he’s saying I’m coming back when elections in Kismayo are finished. I’m waiting and then he’s gone to passed away.”

At that moment, her daughter Shifa walks in from school, in a fateful clarification of her point. Her son was in the Diepsloot store when trouble broke out last week.

“I left being a hawker last year December, because it is very difficult. I am risking myself. I get lots of problems.”

She says her hijab distinguishes her from South Africans.

“So I get lots of problems.

“Then I got a share in a shop with another three guys. And it’s the guys who are working there. Also my son, this year, is not going to school anymore so he’s there in location, working in the shop and that shop also is getting lots of problems last month, on 26 May.

“The Zimbabwean people came to try to rob the shop. And then they are fighting each other and then two people died.

“One of my partners is in jail.

“My son called me. He said, ‘We have gotten into a lot of trouble. Please send us a car’.

“I called many, many Somali people asking to borrow their car. People told me they were not around, there was something wrong with their car and what and what.

“Then at last I got a taxi.

“I took the taxi from [Laudium, Pretoria] to Diepsloot. When we got there were lots of police in front of the shop. And in front of the police was a [crowd] of people,” she says.

According to her it was impossible for her to get out of the car, as she would first have to encounter the mob.

Her son, and other partners, were hiding nearby.

“If they saw I was Somali, they would have killed me.”

Her problems, however, were escalating.

The taxi driver had no appetite for a clash with angry protesters.

“Otherwise they will see from far that I am Somali.

“But if I take my hijab off there is a chance I can still go,” she narrates bravely.

But by this time the taxi driver had an attack of conscience.

“He told me that he can’t leave me here. So I said, ‘Okay, wait until we can approach the shop and fetch the boys.’”

For hours she drove around Diesploot with the taxi driver. “Even the petrol finished and we had to take other petrol. My son and the other guys called me and I told them I’m here in the location. Please come out.”

They refused to risk the ire of the crowd.

Finally her son, two of her business partners and three South African men who had been protecting them emerged.

There was, however, a snag.

“Now we had another problem. I don’t have that money and also the driver did not have R300,” she explains.

The South African men then surrounded the car, refusing to allow them to leave until they received the money.

“We told them to let us go because we don’t have the money now but we promised to bring the money [the next day].”

Their saviours had been sufficiently persuaded.

Amina, her son and her business partners left Diepsloot safely. She says the shop was only looted after the police had left.

“They took everything, nothing left.

The next morning, they took another taxi back to Diepsloot.

“We can’t go back inside until the police came.”

The police arrived to survey the damage together with them.

All that remained of the belongings of the shopkeepers was their dirty laundry.

“The police were showing me the blood on the floor and they said, ‘Look, you killed our people’.”

“I said to them that they [the Zimbabweans who were killed] were crooks. The police said, ‘You’re talking like that to us!’ So I just kept quiet then.”

Since then, however, calm has been restored to Diepsloot.

“I went back last Friday; the situation is better.”

She says, however, that the police refused to provide her with a case number for the looting of her shop. Nor did they acquiesce to her appeal to compile an affidavit attesting to the theft of the asylum seekers’ documents. The police shunted her to Home Affairs, who she knew would refer back to the police before they could issue new documents.

They then went to the shop, undisturbed.

Her son started working in an Ethiopian-owned store in Marabastad on Tuesday.

She says she doesn’t have the money to repair her shop and restock it.

“We can’t go back until we get the solution,” she says, holding out for some kind of overture from the community.

I take a sip of the nearly fluorescent yellow drink I’ve been served, careful to drink it through.

She insists, however, that the police are not to blame.

“The police can’t stay all the time with us and when they do come they are all right.”

She has no complaints about the South African government either.

Abdi’s perception of hostility against Somalis from South Africans is, of course, not unique. A growing number of Somalis are arming themselves to withstand the threats of looting they face in places like Diepsloot. And as Somalis prepare to defend themselves in South Africa, in Somalia and elsewhere in the Somali diaspora, reports continue to spread of a “genocide” being carried out against Somali nationals in South Africa.

The reports are grossly exaggerated, but the hostility and dislike between South Africans and Somalis grows apace. And yet South Africans, like Somalis, are looking for the same thing – an opportunity to make a decent living. DM