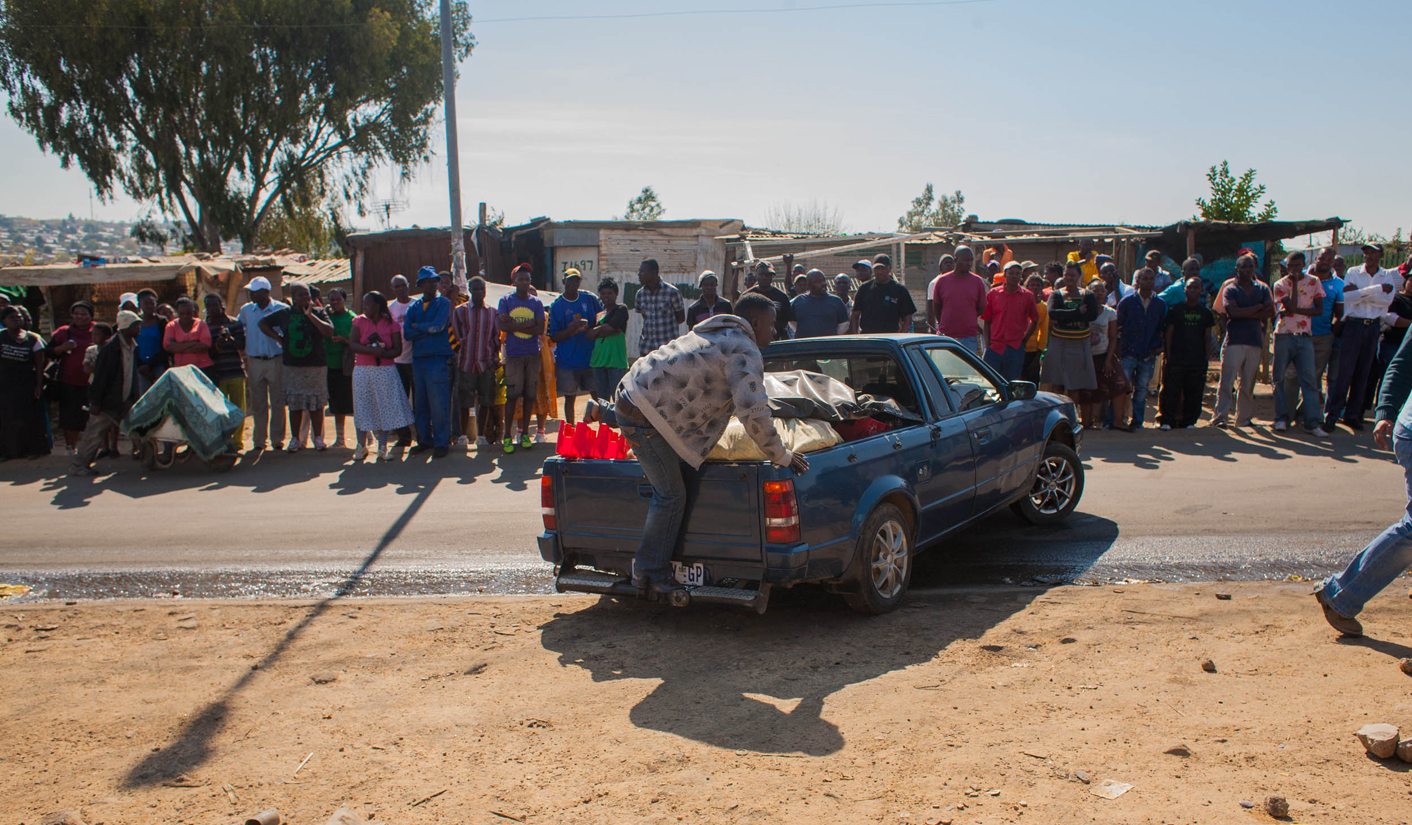 The looting of foreign-owned stores continued on Sunday night as Diepsloot residents sought to avenge the deaths two men killed in a shooting incident at a spaza shop. The spark might have been different but the outcome was similar to the violence, intimidation and theft seen last week in Sebokeng, raising the spectre of xenophobic attacks. By GREG NICOLSON.

A white bakkie parked outside a spaza shop in Diepsloot’s Extension 1 on Sunday evening. The passengers, Zimbabwean nationals, were musicians and had just come from a performance at the mall. Music was throbbing from the bakkie’s speakers and someone from across the street called out, wanting a copy of the CD. The amplifier let out a screeching sound as one of the attendants from the spaza shop, a Somali national, demanded the music be turned down. Then there was a bang.

Oriel Mashimbye was coming from his sister’s house and was watching from a stall across the street. The man sitting in the bakkie’s tray just sat there, he said. “You couldn’t tell he was shot.” Anna Mashangani, who runs a nearby shop on JB Marks Street, wept as she recounted the story.

Photo: “What goes around comes around” was scrawled on the door of a store owned by an Ethiopian national.

The bakkie’s passengers ran down the street, scared by the gunfire. Minutes later they returned and found their friend slumped over in the vehicle, dead. They yelled at the shopkeeper who shot him and grabbed the Somali through the open hatch in the store’s door. “They tried to pull him out. Then someone inside the store must have put a gun in his hand,” said Mashimbye. The shopkeeper shot and killed another of the Zimbabweans and fired wildly in the street, wounding another man. Mashimbye threw himself against a pillar, scared for his life.

Once the story of what happened spread through Diepsloot, residents looted the Somali’s store as well as 18 others owned by foreign nationals in anger. Reportedly, the shooter believed the Zimbabweans were planning to rob his store or resembled thieves who had previously stolen from him.

Photo: An employee in a Diepsloot store hurries to get the stock off the shelves as the store is cleared after threats it would be looted.

The incident follows the looting of foreign-owned stores in Sebokeng last week, which renewed fears of another outbreak of xenophobic violence across Gauteng. Police responded to the looting on Sunday night, firing rubber bullets and arresting 10 people. The Somali national was arrested for the shootings while nine arrests were for public violence. A Diepsloot councillor called the lootings “shocking”.

There was a heavily police presence in Diepsloot on Monday as a crowd of residents stood on JB Marks Street, strewn with rocks and burnt-out tires. A number of foreign storeowners loaded their stock and equipment into trucks and bakkies and fled for safety. One worker said his brother, who runs Diepsloot General Dealer, had been threatened and injured the previous day. Most of the fleeing storeowners said they had received threats or feared for their lives.

Diepsloot residents watched as the stores were emptied. The foreign nationals left with police escorts while most observers allowed them to leave with little more than a wave. Watching the procession and the media’s flurry to catch fleeing foreigners, a group of locals discussed the issue. They denied having any problem with foreigners, with many saying they supported the stores. Without them the community cannot buy bread, said one man.

The general consensus, however, was clear: they couldn’t accept the killing of the two men, especially not when committed by foreigners. “You can replace what’s in a store,” said a local man in response to the anger over the looted stores. “You can’t replace those two souls.”

Photo: An Ethiopian store owner watches as his staff pack up the shop in Diepsloot.

Police spokesman Colonel Bongani Dlamini said the unrest couldn’t be called xenophobia. In Sebokeng, the attacks on foreign-owned stores occurred when a service delivery protest turned into targeted looting that had nothing directly to do with the issue of foreigners. In Diepsloot, residents attacked the stores because they blamed a foreigner for committing murder.

The similarities, however, are worrying. The Diepsloot community had an issue with one store and in particular, one Somali national working in one store. Yet they targeted the stores of a group of foreigners they termed similar regardless of whether they were involved in the shooting. The incident also occurred in a particularly poor area of the township, on the cusp of extensions one and six, surrounded by shacks, with a number of service delivery problems.

“Jack” a local representative of Zimbabwe’s MDC-T party was on the scene trying to find details of the deceased to communicate back to Zimbabwe. He agreed with residents who said the violence is likely to continue overnight and throughout the week. Having witnessed the escalation of xenophobic violence in 2008, Jack pointed out the similarities in how the attacks spread. As South Africa continues to face issues of unemployment they are disgruntled and want someone to blame, he said.

The SAPS said they would monitor the area overnight. While community members were reported to be meeting on Monday afternoon, it remains unclear whether more looting is planned or whether the violence will escalate or spread. DM

Main photo: Store owners leave Diepsloot with their stock as the community looks on.