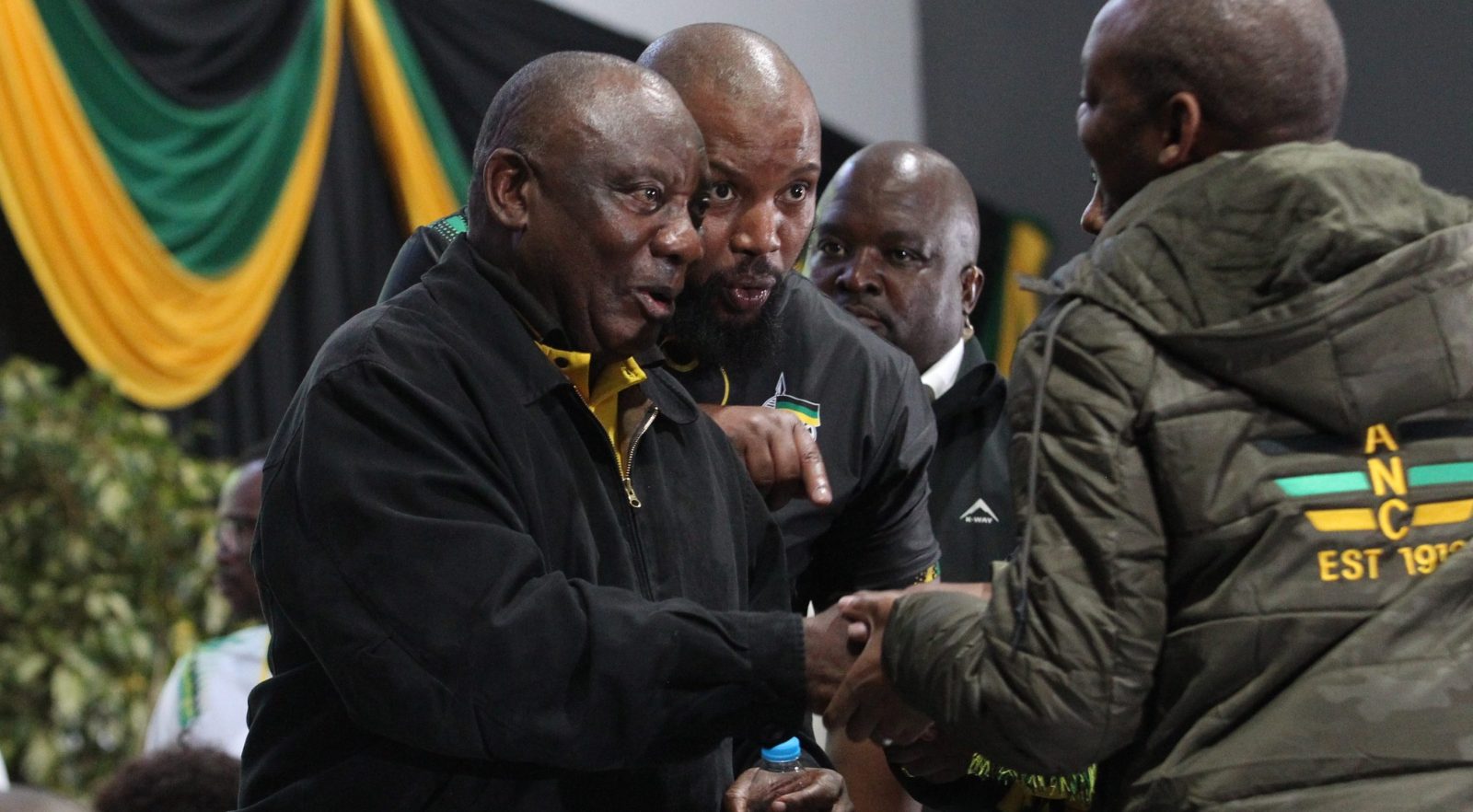 ANC president Cyril Ramaphosa arrives at the conference in Durban with delegates singing the song "wenzen uZuma" as he walks inside the venue. (Photo: Mandla Langa)

Less than a day after he was elected as leader of the ANC in KwaZulu-Natal, Siboniso Duma faced his first test — to persuade conference delegates to allow party president Cyril Ramaphosa to speak without being booed, heckled or disturbed.

President Cyril Ramaphosa arrived at the Olive Convention Centre in Durban on Sunday, 24 July, after speculation about whether he would attend the ANC’s provincial elective conference. Supporters of former president Jacob Zuma had expressed reservations about Ramaphosa delivering the closing address at the event.

Ramaphosa arrived just after 7pm and was welcomed by Siboniso Duma, the newly elected chairperson, and Bheki Mtolo, the new provincial secretary.

Ramaphosa walked into a plenary of ANC members who criticised him for allowing Zuma, their “beloved leader”, to be jailed for being in contempt of court. As he walked in, delegates were singing Wenzeni uZuma (what has Zuma done?), which was telling of their mood.

Duma had to step in to ask delegates to not boo Ramaphosa ahead of his speech. He explained to delegates that whatever issues they had would be discussed at the party’s policy conference next weekend.

“Comrade Ramaphosa as the president of the ANC is also familiar with the position of KwaZulu-Natal that we feel that president Jacob Zuma has been persecuted by the system. Let us give him a chance… The President almost did not make it because he had other commitments, but he chose to come to the conference because KwaZulu-Natal is amongst the biggest provinces in the ANC and deserves special attention.

“He made an effort to address cadres personally. Comrade president is going to make remarks in this plenary and whoever loves the ANC as a disciplined member of the movement will behave because he understands that our issues will be addressed,” Duma said.

Ramaphosa has faced renewed backlash from staunch Zuma supporters since the news of the forex theft at his Phala Phala farm made headlines.

Zuma ally and former Umkhonto weSizwe Military Veterans’ spokesperson Carl Niehaus has openly campaigned against Ramaphosa by encouraging branches to reject the President if indeed he ended up speaking on Sunday.

Niehaus, who was dismissed from Luthuli House in September last year, is also behind the #Ramaphosamustgo protest that took place in Johannesburg last week.

On Sunday morning, Niehaus mobilised a small group of protesters who said they did not want the President to address delegates. However, the Zuma man was nowhere to be seen when Ramaphosa arrived.

@CyrilRamaphosa saw the results of last night, got the message of our picket here at the #ANCKZNProvincialConference,and ran scared. Now he’s chickened out to come. He musn’t just stay away from here he must TOTALLY GO from @MYANC and asPresident of our country.#RamaphosaMustGo pic.twitter.com/2n5JirKwcL

The ANC KwaZulu-Natal conference began in the afternoon on Friday, 22 July, after hours of delays mainly caused by members of the eThekwini regional general council.

The more than 1,600 delegates eventually voted in new leadership. The position of deputy chair went to Nomagugu Simelane-Zulu, nominated by a delegate from the floor. Mdumiseni Ntuli failed to retain his position as secretary, with Bheki Mtolo receiving 195 more votes than him.

Sipho Hlomuko emerged as deputy secretary, and Dr Ntuthuko Mahlaba was elected to the position of provincial treasurer.

In his remarks, Ramaphosa focused on the state of the economy, the energy crisis and factionalism in the party. He said the ANC had been divided since the 2017 Nasrec conference where he was elected, adding that the party needed to improve and modernise its internal capacity.

“Part of renewal is intensifying political education to improve the understanding of our history, values and practices amongst the membership and broader society. We must ask ourselves what role we all must play in providing the healing and regeneration of our movement. The ANC does not exist for its own sake.

“It exists to unite all South Africans in building a society founded on the vision of the Freedom Charter. Let us therefore remember, as we rise from this conference, that we are rebuilding the ANC so that it can be an ever-more effective agent of fundamental social and economic change. Let us remember that we have each joined this movement, and we have each gathered here at this conference because we have made a commitment to the people of South Africa,” he said.

[WATCH] Ramaphosa is now speaking about factionalism in the party. #ANCKZN9thProvincialConference pic.twitter.com/6CjYKgJlKb

On the country’s struggling economy, Ramaphosa said the ANC should challenge the claim that it did not have a coherent plan to drive growth and create employment.

On Friday, former president Thabo Mbeki commented on the ANC’s failure to effectively deal with its renewal, as well as unemployment, poverty and inequality, which continue to haunt the country. He was speaking at the memorial service of late ANC deputy secretary-general Jessie Duarte.

Ramaphosa told the conference delegates: “We are creating conditions for the growth of businesses, both large and small, through a focused, coordinated effort to cut unnecessary red tape. We have shown the potential of public and social employment programmes to provide unemployed people with livelihoods, skills and experience.

“Through this plan, we are working to leverage public infrastructure investment far more effectively and deliberately. We are using this investment to develop our own manufacturing capabilities and local suppliers.

“The Economic Reconstruction and Recovery Plan is a product of deliberations within the African National Congress and the alliance. It is also the product of discussion among the social partners in Nedlac on how to restore our economy in the wake of Covid- 19,” he said. DM