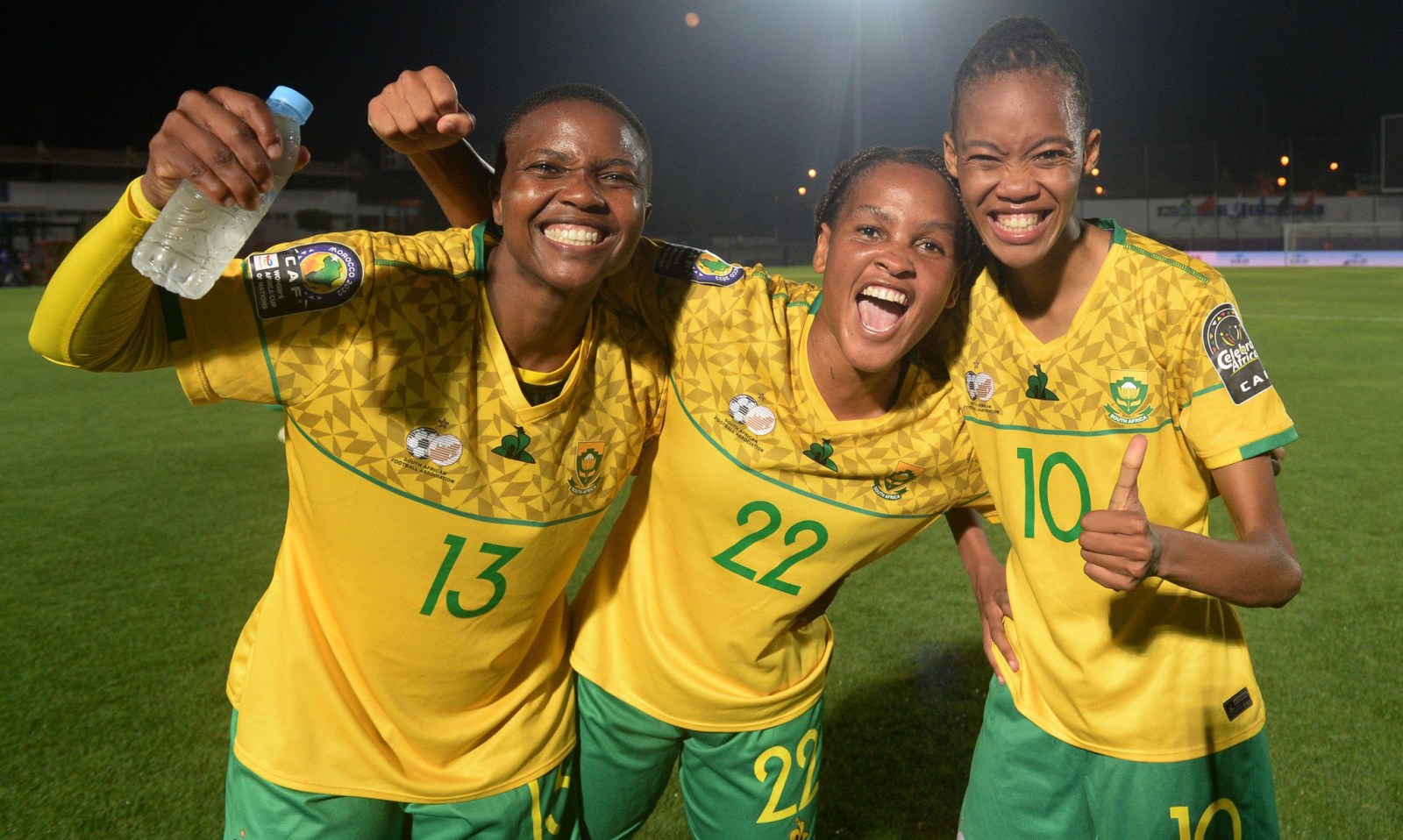 Banyana Banyana celebrates after the 2022 match between South Africa and Tunisia in Rabat, Morocco, on 14 July. (Photo: Twitter/@Banyana_Banyana)

It was far from a classic performance, but Banyana Banyana ground out a positive result against Tunisia in the Africa Women’s Cup of Nations quarterfinals. The result means they will be one of the countries representing Africa at the 2023 World Cup.

They huffed, they puffed, but eventually, Banyana Banyana clinched a double milestone on Thursday night at the Africa Women’s Cup of Nations (Awcon).

Through their 1-0 quarterfinal victory over Tunisia, the South African senior women’s team reached the semifinals of the ongoing continental showpiece. They are now set to clash with Zambia’s Copper Queens on Monday.

More importantly, the team knocked off one of the two objectives they had coming into the 2022 Awcon, which is currently taking place in Morocco.

They — alongside fellow semifinalists Zambia, Nigeria and the host nation — are guaranteed spots at the 2023 Fifa Women’s World Cup. The global spectacle will be co-hosted by Australia and New Zealand from July next year.

Despite the jubilation and joy jolted by the final result, it was far from a classic performance by the Desiree Ellis-coached team.

Banyana Banyana showed their intentions from the onset. A driving run by Mamelodi Sundowns defender Bambanani Mbane into the Tunisian half, as early as the 10th minute, saw the ball end up at the feet of forward Jermaine Seoposenwe.

She danced her way past the Tunisian defence with the poise and precision of a ballerina, before fluffing her finish.

That sequence of play would set the tone for the rest of the evening, as the team created numerous clear-cut scoring chances, but only had the one that Seoposenwe did expertly bury in the 14th minute, to show for their troubles.

When the final whistle blew, the fact that only two of their 10 shots at goal were on target mattered little. They had sealed a second consecutive appearance at the World Cup, following up on their maiden appearance in 2019.

“We started really well. But then we stopped playing. Why? I don’t know. But we kept encouraging the players to play,” Ellis, who had cut an anxious figure on the sidelines as the game progressed, told journalists in the aftermath.

“We kept creating chances. As the game went on, they [the players] felt the pressure, and we tried to calm them down. We made elementary mistakes, we had countless chances that we could’ve just rolled in. And we didn’t take those chances,” the 59-year-old added.

“At the end of the day, it wasn’t a good performance. But we showed a lot of grit as well… We’re going to the World Cup… Even though we didn’t have a great performance, it’s still a celebration. Then we’ll work on getting better.”

One player whose performance triggered mixed emotions was 21-year-old Noxolo Cesane. The University of Western Cape forward’s blistering pace and silky footwork kept the Tunisians on their toes throughout the match.

However, after countless instances of folding the Eagles of Carthage defenders like Sunday washing, a final product was not forthcoming from her. Ellis praised the young attacker for her efforts, adding that she hopes in the next match Cesane will be able to complement her brilliant build-up play with a goal or two.

“We’ll keep working. That’s all you can do. It also comes with a lot of confidence. If a goal went in for Noxolo, she was probably going to score a hat-trick. We could see her confidence going down, and we were trying to keep her going. All we can do is keep working on our finishing, and hope it comes off in the next game.”

South Africa’s semifinal clash against the Copper Queens will kick off at 7pm on Monday, 18 July. Nigeria — the defending champions — will lock horns with hosts Morocco three hours later. DM