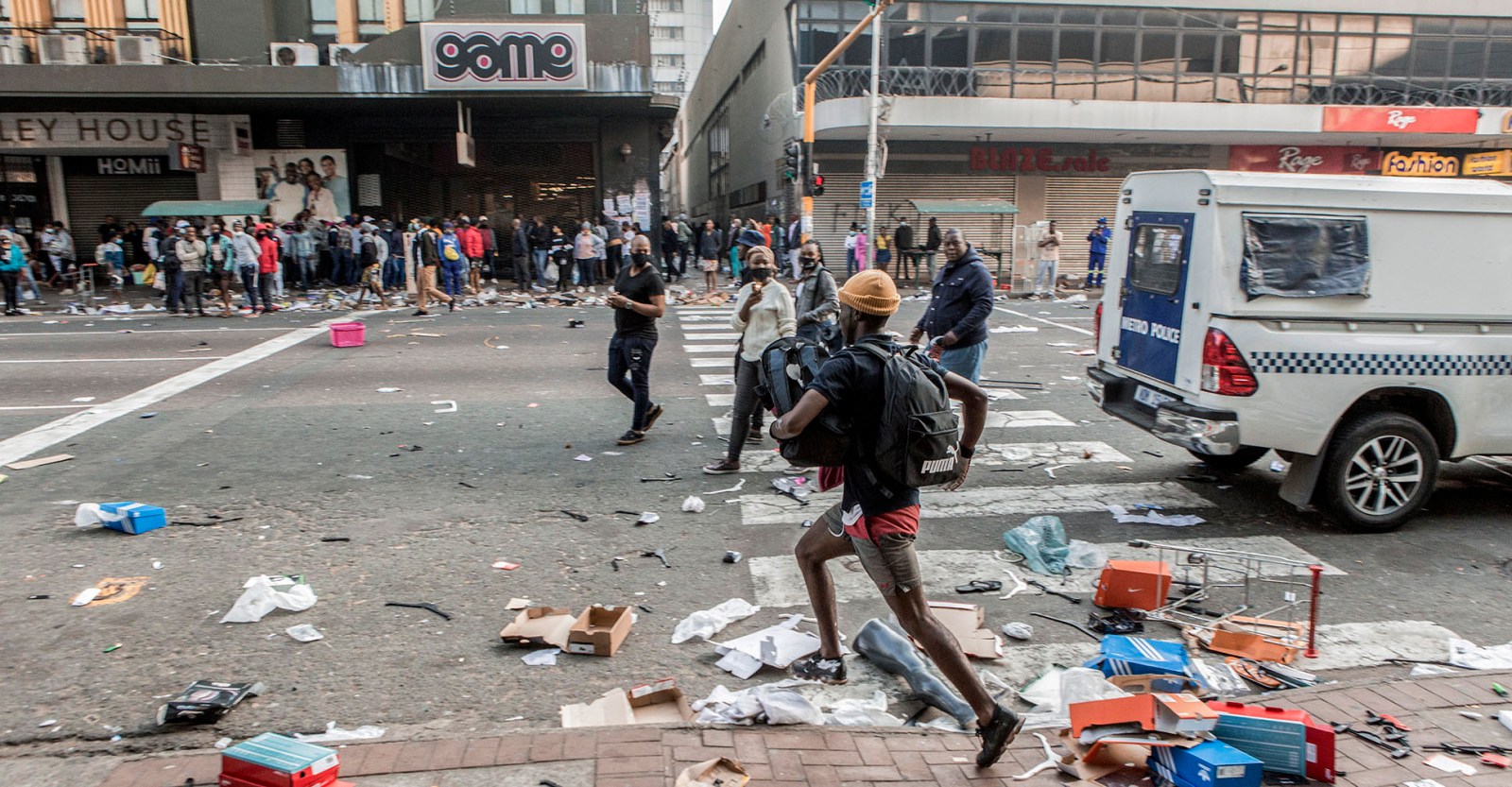 A looter in West Street, Durban, just metres from a small team of police, who are outnumbered. The mob is throwing rocks at police, chanting 'Umshini wami'. (Photo: Samora Chapman)

The Tshisimani Centre for Activist Education hosted a discussion on Tuesday to commemorate the first anniversary of the riots in KwaZulu-Natal that left more than 300 people dead.

It has been a year since the July 2021 unrest that rocked parts of KwaZulu-Natal.

Guest speakers at Tuesday’s commemoration event included journalist Kaveel Singh and Abahlali baseMjondolo general secretary Thapelo Mohapi, who were there when rioting and looting tore through the province.

Singh told the audience he had been covering events leading up to the arrest of former president Jacob Zuma, and noticed there were armed people loyal to Zuma who were stationed at his Nkandla residence.

Later, after Zuma had handed himself over, he heard that trucks had begun blocking roads and the first signs of violence emerged.

Singh said groups of people began protesting, setting tyres alight and breaking bottles, but when police arrived, “the instigators would move to the next spot and start again and police would be diverted … which is what thinned out police response”.

“I wouldn’t say the looting was intensive but the organisation on the ground was something we’ve never seen before,” said Singh, recalling that the instigators wanted the unrest to be “confusion and chaos … there were 100% instigators”.


“One of the things I saw in the south of the city was a group of men transporting a massive amount of tyres to parts of the city … they would light the tyres and when the police came, they’d move to another area.”

Singh said businesses were already suffering as a result of Covid-19 and that people were struggling to find work. By the time the unrest broke out, people were desperate.

“We have police, but what about intelligence? This is what drives an understanding of communities — and that’s just not there,” said Singh, adding that consequence management by government was badly lacking.

Singh said there was “a very small group of people, mostly in government and together with business people, who are stealing and taking jobs away from you”.

Singh said that Durban’s city manager and the KZN premier had done “very little” since 2021, and that tensions between black and Indian people persisted.

“KwaZulu-Natal has 11.5 million people and just 18,000 police. I think it’s possible that we could have another attempted insurrection … more unrest. The only thing that held us together were communities and civic groups on the ground.”

Both Singh and Mohapi said that during the unrest, people helped themselves to food because they were not getting any assistance from the government or political parties.

Addressing the audience, Mohapi said there had long been deep inequalities, hunger and starvation among communities.

He said that when some were asked about their participation in the unrest, they said they didn’t even know who Zuma was, but were told there was an opportunity to get free food.

“The organisation [of the unrest] happened as a result of people on the ground saying they’ve had enough. It was a ticking time bomb.”

Mohapi said that, according to what he had heard from communities, there were plans by certain individuals who had used the Zuma arrest opportunistIcally, but that there were also poor people who wanted food.

Whether this could happen again, Mohapi said people had to ask “whether people are getting services, are young people getting jobs, is government dealing with the issue on the ground, is the economy improving?

“Ramaphosa is focused on pleasing business but forgetting the poorest of the poor,” Mohapi said.

“I was born in the Bambayi area … an area of informal settlements. My shack was burnt on 11 July [last year]. I was commemorating it yesterday and I still don’t know what happened.”

Mohapi said the issues on the ground were still there, and mentioned the recent floods that left more than 300 people dead. He said civil society had responded, not government, as flood victims were still homeless and living in community halls.

“We came to a point where we lost our moral values as human beings … I think it’s clear that right now KwaZulu-Natal does not have a leader. What will happen in December when the ANC conference takes place?”

Mohapi concluded: “People’s anger can go in many directions … people are still angry, people are still hungry — when you are angry, you are bound to not care whether there’s a bullet before you.

“We never supported the riots and people who burnt down infrastructure, but when you have a child, or father and mother who are in jail because they went to go and take food and can’t afford legal representation, you know that we are in a deep crisis as a country.” DM/MC