4,452 families in need, only 141 food parcels distributed – how the Eastern Cape department of social development is failing the most vulnerable citizens 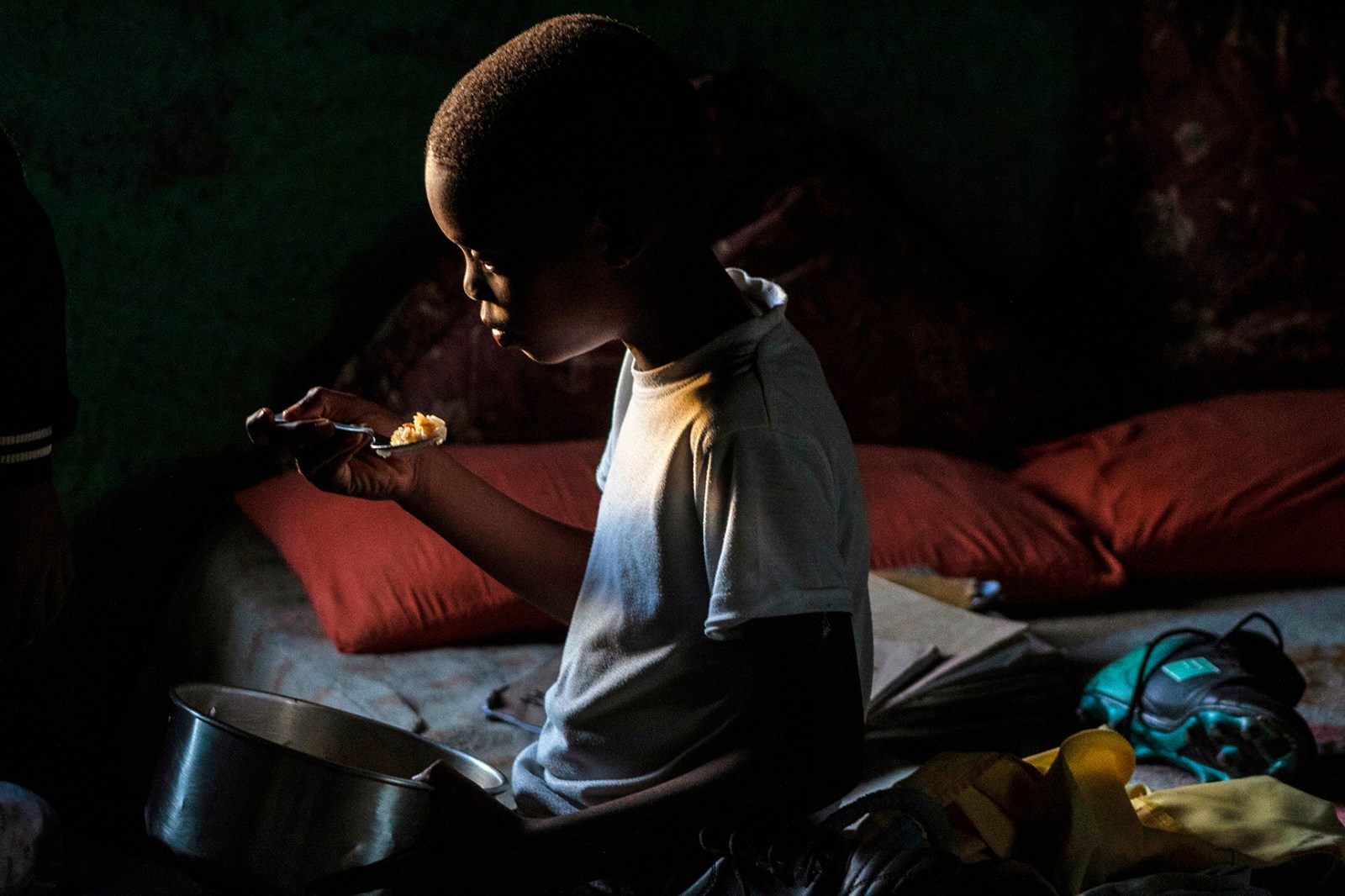 Just 141 food parcels have been distributed in the Eastern Cape since the end of March, despite the province being crippled by hunger and malnutrition. (Photo: Hoseya Jubase)

The Eastern Cape’s MEC for Social Development, Siphokazi Mani-Lusithi, has admitted in the provincial legislature that the department has managed to provide only 141 food parcels to families since April this year. This comes amid worrying reports that several welfare programmes are close to collapse.

In a province stricken by hunger, the Eastern Cape Department of Social Development only managed to distribute 141 food parcels since the start of the financial year in April.

In a written answer to the provincial legislature, MEC Siphokazi Mani-Lusithi said 4,452 families had been identified as possible recipients of food parcels — but only 141 had actually received any food.

She said these families all received a single food parcel “pending further assessments and interventions by social workers”.

The authors of the South African Child Gauge had highlighted the “unexplained dramatic decline” in reported hunger in the Eastern Cape.

“Over the period 2002-2019, reported child hunger rates in that province fell from 48% (higher than any other province) to 5% (the second lowest), despite the fact that the Eastern Cape has the highest poverty rates in the country, with 44% of children living below the food poverty line.

“There was a small but statistically significant increase in reported child hunger in the Eastern Cape, from 5% in 2019 to 9% in 2020.”

But it appears now that families who are in distress have not been assessed. Social Development spokesperson Mzukisi Solani has not answered questions about the data on which the department based its food relief programme.

This follows the failure by the department to distribute food parcels in January this year, which they blamed on an inept contractor. The legislature’s committee on social development has asked the Special Investigating Unit (SIU) to look into how this happened.

Between January 2021 and March 2022, 14 children below the age of five starved to death in Nelson Mandela Bay.

In addition, 216 new cases of severe acute malnutrition were confirmed in the Eastern Cape’s biggest metro, where more than 16,000 families were left without food aid due to a bureaucratic bungle by the province’s department of social development.

In the Sarah Baartman district, 13 children under five have died of severe acute malnutrition since the start of 2021.

In Butterworth, seven children died of hunger between January and February this year.

The Democratic Alliance’s Edmund van Vuuren said he wants the MEC to explain to the social development portfolio committee “why her department’s millionaire managers are apparently sitting in their offices, drinking tea and eating biscuits, while our residents starve.

“Earlier this year, the DA revealed that R67-million provided in grant funding to assist the department — meant for food parcels — had to be handed back to National Treasury because the department had failed to spend it.”

Breaking down the distribution of food parcels by district, Mani-Lusithi said no food had been distributed in the Buffalo City metro (East London) or in the Amathole, Joe Gqabi and Sarah Baartman districts.

Just one food parcel had been delivered in the entire Chris Hani district.

Only three families in the sprawling OR Tambo district — around Mthatha and including Butterworth — each received a single food parcel.

In Nelson Mandela Bay, only 32 families were given food parcels.

The bulk of the food parcels was distributed in the Alfred Nzo district, a deep rural area, with 105 parcels distributed to beneficiaries in the Mbizana Local Municipality.

A report following a hearing into the budget allocation of the department made it clear that many programmes run by Social Development were close to collapse.

There was a unanimous call from all parties for an investigation by the SIU into the non-spending on social relief of distress grants, as well as consequence management for any officials found to be the cause of this gross negligence.

The investigation should cover, among other issues, procurement processes leading to the awarding of tenders to service providers with no capacity to deliver, and second, alternatives that could have been explored to ensure that the service reaches its beneficiaries.

The department received R2.7-billion for the current financial year, yet it seems incapable of functioning properly.

The department owes 143 employees occupation-specific dispensation payments, for which no budget has been allocated.

There are currently 3,359 employees or past employees of the department who are owed money. The total amount owed is R76.5-million. Yet, the budget to pay them is a mere R12-million.

In the last financial year, the department could not fill 1,064 vacant posts.

According to the report,  the department “does not have a realistic and workable organisational structure and its human resources division is particularly badly affected”.

The report further highlights a shortage of social workers and supervisors, despite its commitments to have these staffing issues resolved when it called for the implementation of occupation-specific dispensation payments.

Other problems mentioned in the report include:

Members of the provincial legislature also expressed alarm that “the department has submitted documentation with discrepancies, and this might be construed as a deliberate effort to not only mislead the committee, but can be regarded as undermining the constitutional work of the legislature”.

An entire district in the province, the Alfred Nzo region, did not apply for funding for special daycare centres despite the disability prevalence of 8.1% of children between 0-5 years in the area. As a result, no funds were allocated to the district for such a service.

The department could not produce a concept document for the recently introduced Indlezana that deals with child protection, yet a budget is allocated for its implementation — making it difficult to measure the impact of this programme.

The department has still not developed an integrated plan for foster care for children who are above the age of 18.

Of the 120 service offices located throughout the province, all are under-resourced in terms of vehicles, computers and other equipment. Twenty-seven offices are not connected to the internet.

The lack of social services in the province is particularly disturbing as the latest edition of South Africa’s Child Gauge shows how vulnerable the children in the province are.

According to the publication, a third of children (33%) in the Eastern Cape live with neither parent. Orphaning rates are particularly high, with 4% of children having lost both parents.

More than 70% of all children in child-only households live in three provinces: the Eastern Cape, Limpopo and KwaZulu-Natal.

Nationally, child poverty remains most prominent in the rural areas of the former homelands (two of which are in the Eastern Cape), where 81% of children were below the poverty line in 2020.

The urban child poverty rate, by contrast, was 51%, the latest Child Gauge states, adding that nearly 50% of children in the Eastern Cape and Limpopo lived in households with no employed adults. DM/MC