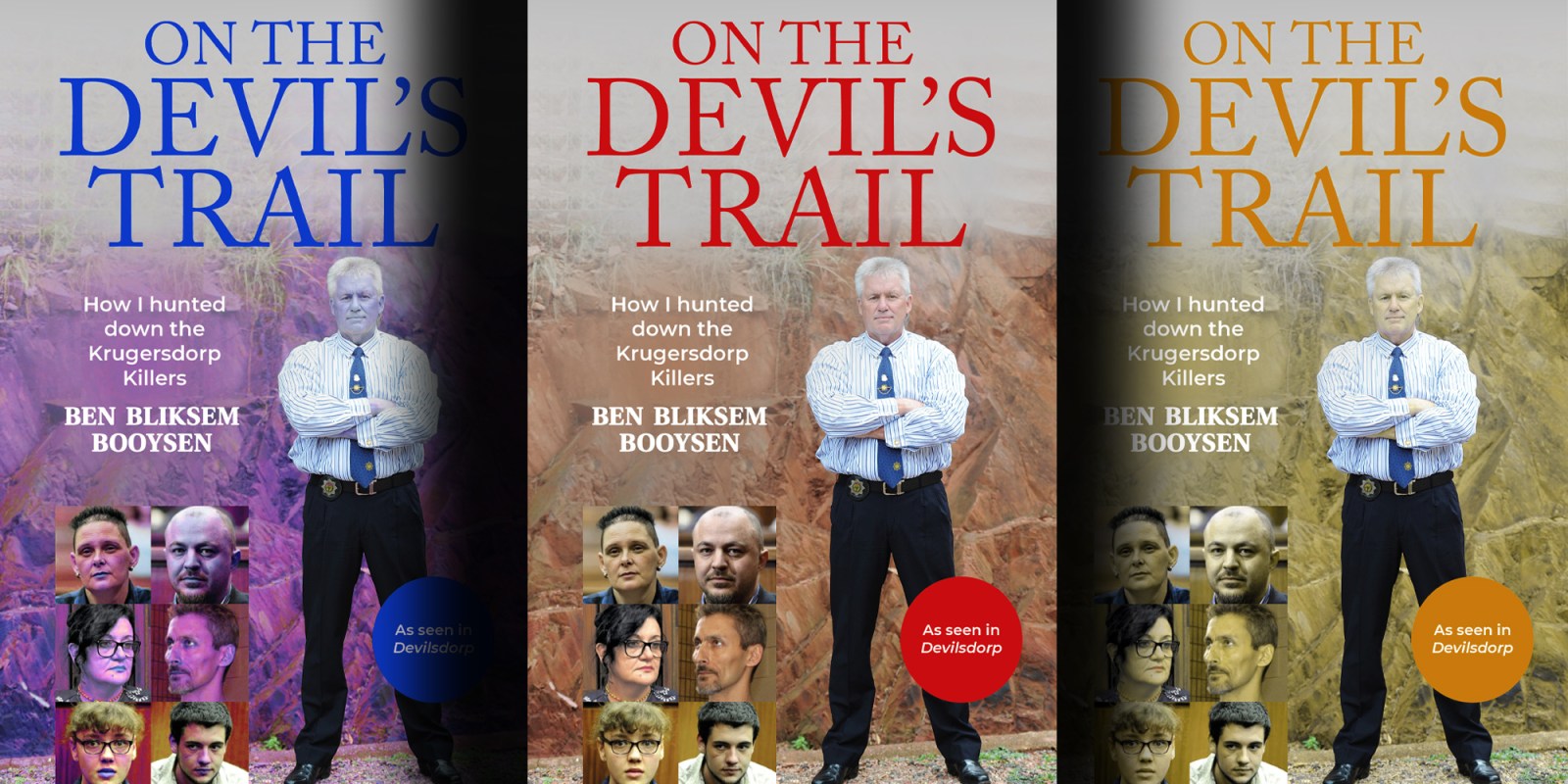 ‘On the Devil's Trail’ by Ben ‘Bliksem’ Booysen is a reflection of the Appointment Murders and South Africa's complicated policing service, according to the reviewer. (Photo: Daily Maverick)

Ben ‘Bliksem’ Booysen is the retired police detective behind the popular ‘Devilsdorp’ documentary series. Now he has written a book, in collaboration with journalist Nicki Gules, that not only provides extra information about the Krugersdorp cult but traces his life during apartheid with a fresh look at the ongoing crisis within the police service. ‘On the Devil’s Trail’ is a book for South African true crime fans.

Retired policeman Ben “Bliksem” Booysen is a meticulous policeman who has teamed up with an investigative journalist to deliver a clear, to-the-point book that outlines events in a clear timeline.

On the Devil’s Trail was released in April 2022 by Melinda Ferguson Books and is in collaboration with Nicki Gules, assistant editor at the Sunday Times, responsible for investigations and projects.

After the release of the Showmax documentary Devilsdorp, about the killing spree committed by a group of people who called themselves Electus per Deus (Chosen by God) in the Gauteng town of Krugersdorp, Booysen became a popular figure in the South African true crime fan pages. Their killing spree started in 2012, but due to several problems — including police botches — Booysen finally took the case in 2016.

The cult in the Krugersdorp area had killed 11 people since 2012, including a fellow cult member. The group was led by Cecilia Steyn, who convinced the group she was a 42nd generational witch and Satan worshipper. In reality, she had wanted to kill her rivals but by 2016, the cult gained notoriety when professionals such as financial planners and real estate agents were murdered. The murders were then dubbed the ‘Appointment Murders’.

Booysen, also a Krugersdorp resident, took the case in 2016. Booysen’s book recounts his journey in the case: from his detective work to the trail and finally, to the Showmax documentary which thrust him into the spotlight. The book is written in a way for those who have not watched the documentary series as an incentive go and watch it — while for those who have watched the series, to get a grasp of one of its most admirable characters. The writing is thoughtful, considered and to the point.

Booysen talks about the convicted killers in the book. On Marinda Steyn, he describes her as a “mother monster”, while he speaks of her son, Le Roux, as though he were his own child.  He also speaks about the mastermind Cecilia Steyn as if he was speaking about something that equally disgusted and fascinated him. Booysen describes them perfectly — from Marinda’s gait to a moment when his wife, Christelle (a fellow police official) caught a lie from Cecelia. It is clear in the book that Booysen makes the point to describe them as criminals rather than through the supernatural aspects they believed in.

Outside of the group’s killing spree and subsequent investigation, the book touches on policing. You have the good cops like Booysen, his wife Christelle and many others who work hard trying to keep South Africa’s streets safe for residents, while on the other side there are police officials who are not doing their work efficiently. My colleagues Marianne Thamm, Caryn Colley and Vincent Cruywagen have written extensively about the rot within SAPS, which is further evidenced in the book along with the factions and divisions within the SAPS.

In the book, there are several questions to be asked about Cecilia Steyn’s husband — a policeman — and other potential policemen’s involvement in the group. Booysen has raised questions about the cult’s access to police-issued items such as ammunition and police uniforms through comments made by different informants and sources.

But the heart of Booysen’s disappointment with the police can be read at the end of Chapter 38, where it is written: “On my final day at work, I went to court and came home. Christelle cried and hugged me. I had no retirement party or farewell function. Until today I have heard nothing from the police. The last five years of my career were the most heart-breaking time of my life”.

Booysen provides a fascinating account of his experience of growing up in apartheid South Africa. His description of the smell of coal in mining-rich Mpumalanga takes you to a time when people were divided not only by race but by the types of labour they performed. Booysen describes the black men who lived in hostels and the rock drillers who were the poorest whites. The South Africa he describes in the book has changed a lot, but at the end of the day, people are still divided by race and employment types.

In the 1980s and 1990s, Booysen is a cop with an attitude during apartheid. This part was especially fascinating as he dealt with what he was told versus what was morally right, versus what he experienced as a policeman, versus the Satanic Panic of the 1980s. I appreciated this part of the book, where the reader is taken into his mind, his thoughts and experiences of that time, including several riots and instances of necklacing.

Undoubtedly, one of the most poignant parts of the book is in relation to Booysen’s time in the Hawks. In Chapter 16, Booysen speaks to anti-apartheid activist Robert McBride, the then head of the Independent Police Investigative Directorate. “At one point he and I started speaking about the 80s and the riots and what had happened back in those days. Neither of us boasted about what we had done. He said that in those times he did what he had to do.”

As a whole, On the Devil’s Trail is funny, sad and, most of all, a reflection of a complicated policing service where the good guys are really good but the bad guys are rotten to the core. DM