The Struggle Continues: Robert McBride, a lifetime in the eye of the storm 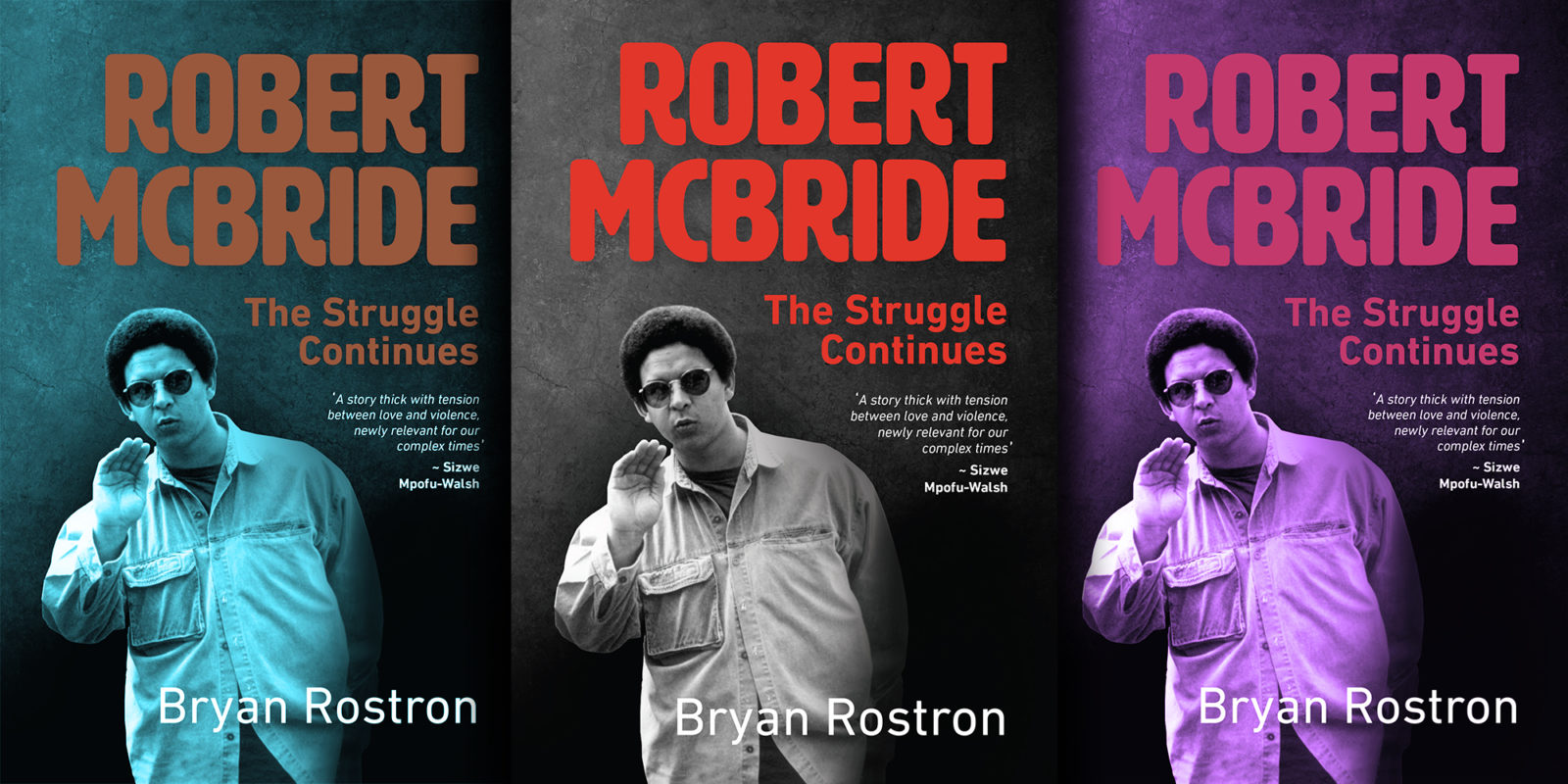 Nelson Mandela, Chris Hani, Walter Sisulu, Cyril Ramaphosa, Dimitri Tsafendas all, at some point, intersected the tumultuous life of Robert McBride. Had Nelson Mandela not fought for McBride’s release in 1992 after 1,463 days on Death Row, the ANC would not have been able to look history in the eye.

Not many get to meet their future biographers on Death Row. But this is how, in 1989 at Pretoria Central Prison, author Bryan Rostron came to meet condemned inmate 3737, Robert John McBride, then only 26 years old.

McBride, along with Gordon Webster, had led, in the mid-1980s, an MK Special Operations Unit in KZN, commanded from Botswana by Aboobaker Ismail, who reported to Joe Slovo who in turn reported to Oliver Tambo.

The line to the top leadership of the ANC in exile was clear.

But not back then. Not when McBride was sentenced to death or even afterwards.

At the time, McBride had insisted he was some sort of “maverick” bomber who had acted impulsively, placing on 14 June 1986 a powerful car bomb outside the Why Not and Magoo’s bars, favoured hangouts of the apartheid security police, on Durban’s Marine Parade.

McBride was sentenced in 1987 to hang for his role in the bombing, in which three women, Angelique Pattenden, Julie van der Linde and Marchelle Gerrard died and 69 others were injured. The attack took place at the height of a State of Emergency declared by PW Botha in 1985. McBride was 22.

The state went into lockdown with thousands of anti-apartheid activists arrested, some killed in detention while newspapers were banned and censored. Then there were the raids by the South African government into neighbouring Zimbabwe, Botswana, Mozambique and then Swaziland.

The bombing campaign McBride and Webster led in KZN at first was meant more as “propaganda” aimed at warning the apartheid state that MK was around and escalating the internal pushback as had been resolved by leadership at the ANC’s consultative conference in Kabwe, Zambia in 1985.

McBride was arrested — with his father Derrick and fellow MK member Greta Apelgren — after a daring raid on Pietermaritzburg’s Edendale hospital to rescue the wounded Webster who had been shot and captured by police. Webster later escaped into exile.

And so it was two years into McBride’s limbo on Death Row that Rostron, a journalist and author, managed to get into Pretoria Central posing as a family member and interviewing McBride clandestinely.

The result of Rostron’s meeting with the 1.95 metre-tall, quietly spoken young man with the steely resolve was a painstakingly-researched biography of McBride’s already extraordinarily tumultuous life.

Titled Until Babylon Falls, the biography was first published in 1991, a year before McBride’s release from prison, orchestrated by Nelson Mandela.

Mandela had personally insisted on McBride’s release as a key condition to continued talks with the Nationalist Party government who were vehemently opposed to it.

Today, however, there are many senior current and former ANC leaders, officials and deployees, who must — in light of damning testimony to the Zondo commission of inquiry into State Capture — rue the day McBride escaped the noose to continue the struggle in post-democratic South Africa.

Rostron’s remarkable 1991 book has been republished and updated and is titled Robert McBride — The Struggle Continues (Tafelberg). It reads like a political thriller, biography and historic record all rolled into one.

The updated biography covers McBride’s later life, his stint in the Department of Foreign affairs where he became involved in Irish and East Timor peace talks.

It also tracks how McBride begins to become a focus of rogue intelligence networks serving ANC leadership tussles and not the country, and how finally, after his appointment in 2014 as the executive director of IPID, criminal elements inside the state turned on him (and others rooting out compromised officials in high places).

McBride has named former Minister of Police, Nathi Nhleko, a fervent Zuma supporter, as a key figure in the capture of the law-enforcement cluster and for also trying to neutralise the work of IPID.

Rostron’s updated book also confirms, for the first time, that the 2017 attempt by SAPS Crime Intelligence to illegally procure a grabber (powerful eavesdropping equipment) at the inflated price tag of R45-million was planned to siphon off public funds aimed at “buying votes for the Jacob Zuma faction” at the ANC’s elective conference at Nasrec.

The “astonishing tale of malevolent intent”, writes Rostron, had it succeeded, would have amounted to a “bought coup d’etat”.

Three days before the ANC conference, some of the country’s most senior police officers, accompanied by then minister of police Fikile Mbalula’s adviser, Bo Mbindwane, met at the Courtyard Hotel in Pretoria and attempted to “procure” the grabber illegally.

“That criminal plot — where fraud, treachery and treason mix queasily — reaches into the very highest levels of our police and politicians. It is a battle that is not yet won,” Rostron writes in his introduction.

“The Grabber plot,” writes Rostron, “strikes at the very heart of the Constitution.”

“Ramaphosa must have challenged Fikile Mbalula, still Police Minister, as to why his adviser was present at the shifty Courtyard Hotel meeting because Mbalula soon rang Robert to ask plaintively, ‘Why are you doing this to me?’ ” writes Rostron.

After Ramaphosa’s victory, the eternally adolescent Mbalula was made Minister of Transport and we live with this each day.

McBride’s impetus in the fight against corruption, he told Daily Maverick, was the same today as it was back when he was a young combatant; “audacity and contempt”.

“I hate injustice,” he added.

McBride has, throughout his hounding by those in the state whom he was investigating, defiantly spoken out and challenged his attackers with the best weapon in a constitutional democracy — the law. And at almost every step, he has been vindicated by the courts.

The grabber plot is a big deal, although South Africans can be forgiven for not seeing the wood for the trees in the great forest of corruption.

Essentially, what it exposes is that the ruling party, the ANC, under Jacob Zuma, attempted to siphon off public funds from the police budget to buy votes.

Documents pertaining to this shocking and utterly criminal abuse of power remain classified to this day, although National Commissioner Khela Sitole has consistently promised to Parliament and others, that they would be declassified.

Current Minister of Police, Bheki Cele, clearly knows what will surface in the documents and that McBride, as IPID head, would not stop until he had the evidence he was entitled to and needed.

So McBride had to go, and Cele had Parliament’s utterly spineless police portfolio committee terminate McBride’s contract. Almost all ANC members turned viciously on McBride — the man Mandela saved from prison, the man who protected the ANC for its order of violence against civilians.

Today McBride is involved in setting up an anti-corruption, technical Ethics Unit located in the Department of Public Service and Administration.

McBride says, should it be given the budget it requires, the unit would, employing technology, be able easily to conduct lifestyle audits of public officials at national, provincial and local level. It would pick up red flags with regard to conflicts of interest of possible corruption or other irregularities.

There are comrades who in their prayers must beg for the unit to be stillborn.

In the meantime, a bedraggled cohort of rogue spies, who still have some cash in hand, are still plotting against McBride. Rostron writes of a recent attempt to frame McBride for selling “state secrets” to foreign “agents”.

In a letter to the Inspector General of Intelligence, Setlhomamaru Dintwe, McBride set out that three people met in Paris, “An Israeli and two British” as well as the owner of the same Durban company that Crime Intelligence had used to try to launder the “grabber” money.

While no evidence ever emerged from this Paris meeting of McBride’s apparent treason, “the slander was fed to ANC MPs on the Police Portfolio Committee, who promptly turned on McBride to block the extension of his tenure at IPID,” writes Rostron.

He adds that opposition party members believe Cele had passed on the “Paris” information as fact. One opposition member told Rostron that “I went to see Bheki Cele about something else, and Cele told me that Robert was selling information to foreign agents… he was vilified for absolutely nothing”.

Daily Maverick spoke to McBride the day after the Cape Town launch of Rostron’s The Struggle Continues. He accepts the attention with reserved caution and good humour. He is a man at ease with himself, his contribution and his life.

“I try not to get into the limelight, but it seems to follow me,” he says with a smile.

So, who would Robert McBride have been had the world he had been born into in 1963 not intruded, in the most violent and consistent fashion, every aspect of his life, from how he could describe himself, to where he lived, where he could learn and work and who he could love.

Somehow, it is difficult to picture.

After all, this is the man who was key to the ANC’s early negotiations with the then Nationalist Party Government, a role albeit beyond his control.

Four months after his release in 1990 after 27 years behind bars and three days into his talks with De Klerk, Nelson Mandela had gone to meet McBride and other political prisoners at Pretoria Central prison.

There, the future president of democratic South Africa had promised that the ANC was fighting for their release.

De Klerk had been adamant, however, that McBride not be released as “he was a figure of hatred by whites”. And while senior ANC members had urged Mandela not to “stick on this” Mandela did not back down.

“Today we hold the line. Either they release McBride or negotiations finish,” Mandela said.

It was De Klerk who blinked and gave in. And in fact Robert was then moved from death row to Durban’s Westville Prison where he got a call — the only call he got all his years in prison — and it was Cyril Ramaphosa who said, ‘you are out on Monday’,” Rostron recalled.

The time is finally right for McBride’s story to be more widely told. And while the depth of Rostron’s earlier and later research for The Struggle Continues is remarkable, it never bogs down the narrative which is thrilling from the first page to the last.

It situates McBride right up there — one of the remaining few former MK combatants who has stayed true to his mission — in the party’s now tarnished firmament of liberation heroes.

While many of the old cohort of heroes have died, McBride’s determination to live out the values of the Constitution of democratic South Africa remains an act of bravery and defiance. DM