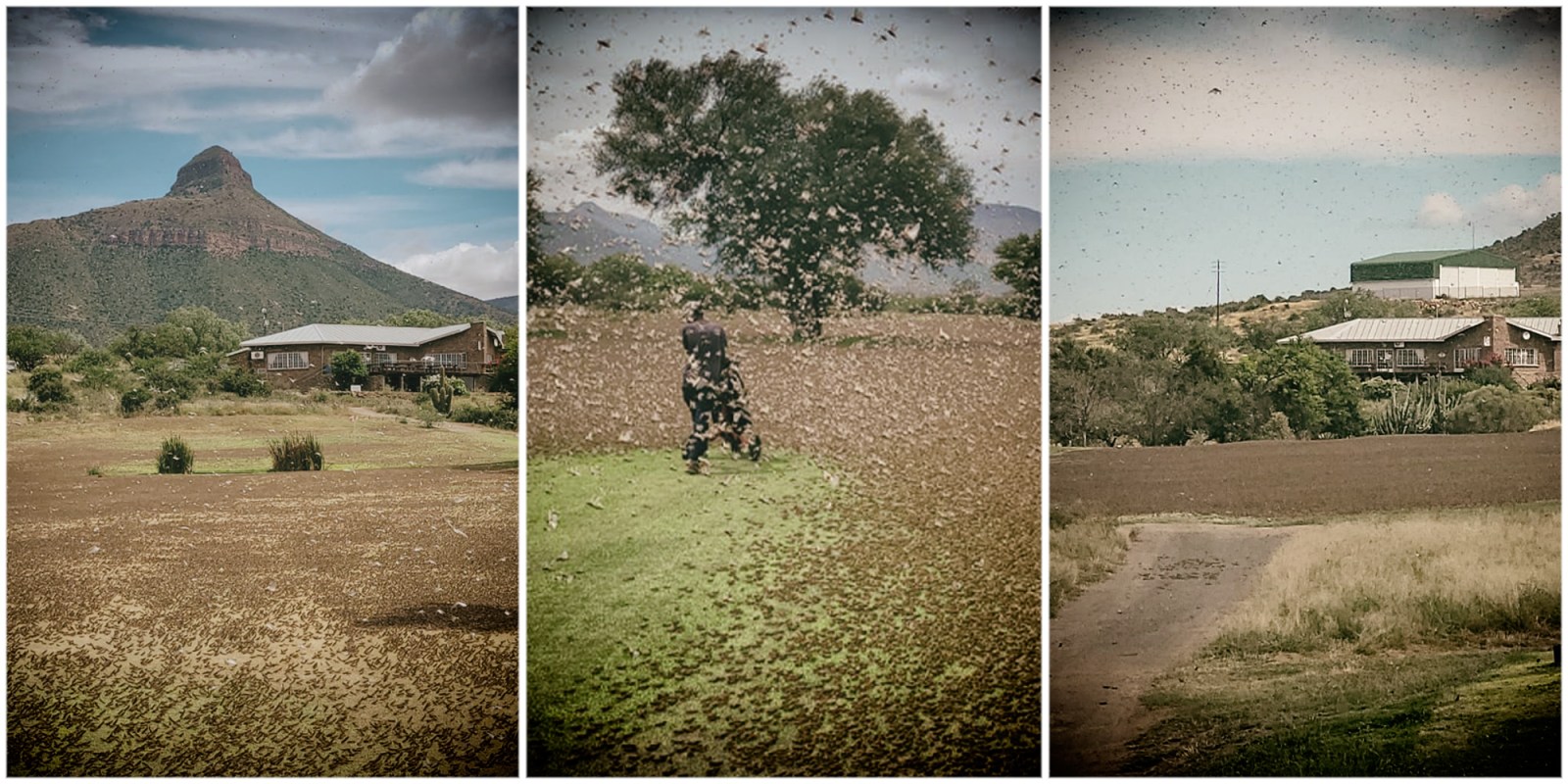 Locust swarms in a farm in the Eastern Cape. (Photos: Supplied)

The agriculture department says it has spent R80-million on the locust-control programme but locust officers have not been paid in six months – while the plague continues to threaten thousands of hectares of crops.

Locust officers who have been battling the locust plague in parts of the country since September last year are struggling to get paid for the work they have done over the past six months.

This has led Agri SA to write to Minister of Agriculture, Land Reform and Rural Development Thoko Didiza requesting an investigation into the non-payment of critical service providers in the midst of the worst locust outbreak in 25 years.

Andrea Campher, Agri SA’s risk and disaster manager, warns if no action is taken, the government could lose the officers’ services while millions of hectares of crops remain in danger of extensive damage due to the ongoing crisis.

Locust swarms have damaged and devoured thousands of hectares of grazing in the Karoo and parts of the Sarah Baartman and Amathole district municipalities.

Farmers have described swarms as being the biggest in 25 years.

Swarms have also been seen in the Northern Cape and Western Cape.

In April, the agriculture department revealed that it had spent R80-million on the locust control programme – most of the funds allocated towards the procurement of insecticide, including the spraying pumps, protective clothing, payments to controllers and aerial spraying.

“Agri SA has repeatedly alerted the Department of Agriculture, Land Reform and Rural Development to the problem of delayed payments to locust officers, the people directly responsible for pesticide spraying. Some of these have not been paid for up to six months,” Campher said, adding that the fuel allowance has not been adjusted since 2013 and, with the current record-high fuel price, locust officers now find themselves in dire financial straits.

When Daily Maverick reached out to affected locus officers, some declined to comment stating that they are under a contract with the agriculture department and therefore unable to comment, while others wanted to remain anonymous fearing victimisation.

One of the locust officers said he was paid for October, November and December 2021.

“We have not been paid for January, February, March, April and May. Last year we had the same problem and we were eventually paid after six months,” he said.

Another locust officer said some of them have been paid for only the work they did in November.

Campher said in March 2022 the department led a weekly joint operations committee (JOC) meeting to coordinate efforts to contain and eradicate the locust outbreak, which has affected thousands of hectares of agricultural land in South Africa.

“Agri SA has used this forum to provide weekly reports compiled by its provincial affiliates on the status of the payment backlog. Despite weekly requests for the matter to be investigated, no action has been taken to address this critical threat to the sector’s ability to combat the outbreak,” she said.

Due to the department’s inaction, some of the locust officers have now sought legal counsel, and the threat of litigation looms unless the matter is addressed urgently. “Agri SA is particularly concerned that the current situation will not only cause locust officers to withdraw their services, but will also undermine the department’s future ability to contract service providers to fulfill essential functions in future crises,” Campher said.

In an unfortunate turn of events, the weekly JOC meeting scheduled for 8 June 2022, where this crisis could have been addressed, was cancelled as officials were on leave.

“That this is happening as this issue hits a crisis point has necessitated the escalation of the matter. Agri SA has therefore seen no alternative but to appeal for Minister Didiza’s intervention to investigate the reason for the ongoing non-payment, and to ensure the swift resolution of the situation,” she said.

In addition to addressing the immediate need, Agri SA also wants Didiza to improve the payment system to avoid similar problems in the future.

“Agri SA will continue to engage all stakeholders to ensure that the sector can mitigate the impact of the current locust outbreak on the South African economy and the nation’s food security,” she said.

The agriculture department spokesperson Reggie Ngcobo failed to respond to questions sent to him by the time of publishing the article. DM/OBP