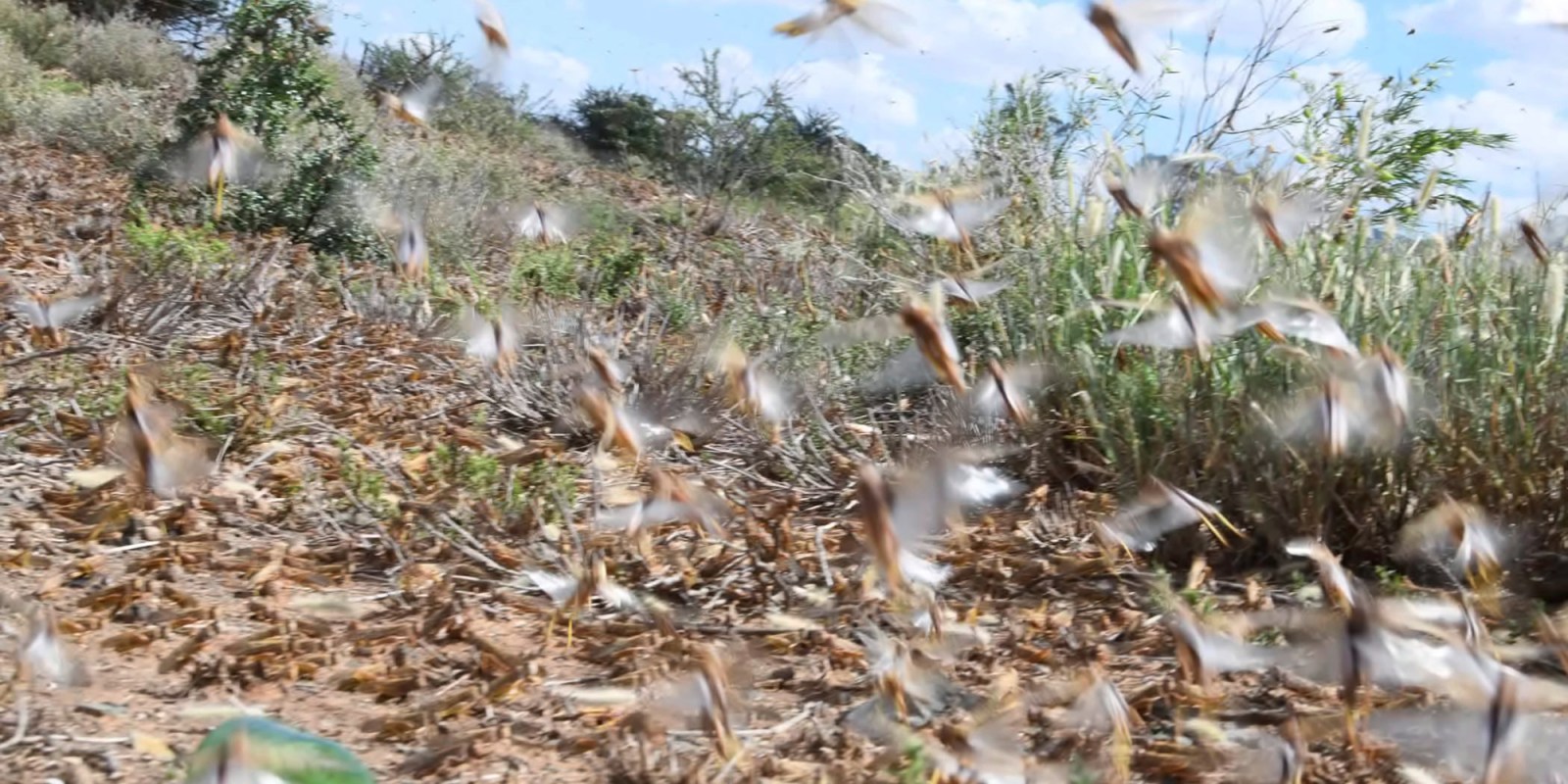 Swarms of locust hit between the town of Steytleville and Wolwefontein on March 24, 2022 in Steytleville, South Africa. It is reported that the swarm stretched over 30 kms near Kleinpoort. (Photo: Gallo Images/Die Burger/Lulama Zenzile)

Three provinces in South Africa have been plagued by the largest brown locust swarms in decades. And because of heavy rains, the locust outbreak shows no signs of stopping.

Huge swarms of brown locusts have been an issue in three provinces since September 2021, leaving a trail of destruction in the Eastern Cape, Western Cape and Northern Cape.

Reggie Ngcobo, the spokesperson for the Department of Agriculture, Land Reform and Rural Development, said on Thursday that “this locust outbreak is the highest in decades” as rain continues to fall in the Karoo and nearby areas.

“The wind is also playing a role in migrating the swarms to the areas where they have never been, such as the Garden Route area in the Western Cape and in citrus farms of Kirkwood and Patensie in the Eastern Cape. [The locusts] have affected the veld, grazing lands, crops, roads, railway lines and [were] further reported in towns and residential areas.”

Ngcobo said the department had appointed ground teams, 1,200 controllers and two helicopters that were carrying out aerial spraying, mostly over inaccessible areas and where there are huge locust outbreaks.

“To date, the department has spent more than R80-million on the locust control programme and most of the funds have been spent on the procurement of insecticide, including the spraying pumps, protective clothing, payments to controllers and aerial spraying,” he said.

The Western Cape had contributed R5-million to the programme.

“The department has established a Joint Operation Committee that meets once a week to discuss locust control issues. The participants include the department, Agricultural Research Council, Free State province and Eastern and Western Cape provinces, Northern Cape and organised agriculture.”

Ngcobo said the registrar had assisted by registering new insecticides to be produced for the control of brown locusts.

“In addition, the department has procured insecticides, spray pumps and protective clothing and distributed them to the locust control contractors. The distribution of insecticide depends on the locust outbreak area to be controlled.

“Currently, the locust outbreak is in mixed stages, with more flyers confined to eastern districts due to winds, especially around the border of the three provinces. The current aerial spraying is within that area. There are new developments due to continuous rains received in the area,” said Ngcobo.

The districts affected by the locust outbreak are:

Professor Frances Duncan, the head of the School of Animal, Plant and Environmental Sciences at the University of the Witwatersrand, said the Northern Cape and Eastern Cape had recently experienced their longest drought in 100 years.

“The seven-year drought, starting with a lack of rains in February 2013, wrought havoc on this sheep farming community. When the summer rains finally fell in October 2020 the farmers had to contend with a locust outbreak as well.”

Duncan said the brown locusts found in this area mainly eat grass but will consume any green plants and have been known to decimate maize fields.

“The brown locust (Locustana pardalina) is an arid-adapted locust endemic to South Africa. It is a different species to the swarming locusts found in other parts of Africa. It has regular outbreaks in the Nama Karoo region and these outbreaks can extend into the southern parts of neighbouring Namibia and Botswana.”

She said Africa is currently experiencing two locust outbreaks, both due to unusual climatic conditions.

“These two outbreaks are unrelated but are due to the unusually high rainfall and flooding in the areas where low densities of the locusts occur. The desert locust (Schistocerca gregaria) is producing a plague-type outbreak in north and east Africa. There are localised swarms of the African migratory locust (Locusta migratoria migratorioides) in southern Africa.

“Two other locust species – the red locust (Nomadacris septemfasciata) and the brown locust – are known to have swarmed and caused agricultural damage in southern Africa,” she said.

She said the eggs can survive for several years in the soil, with the embryos developing at different rates in response to environmental conditions.

“In some eggs, there’s a delay in the embryo development regardless of the moisture available, whereas in other eggs the embryo will start development as soon as moisture is available. Both types of eggs can be found in the same egg pod. All embryos, from both egg types, can reduce their rate of development when environmental conditions are unfavourable.”

Duncan said the eggs can remain in the soil for several years with the embryos waiting to receive sufficient moisture to complete development.

“This results in synchronised hatching when there’s sufficient rain, as all the embryos are at the same stage of development regardless of when the eggs were deposited. The solitary females tend to lay their eggs in the same areas and thus there is a build-up of eggs in particular areas. How the females find these egg-laying sites is unknown.”

She said while many of the eggs remain in the soil, some hatch and produce the solitary form of the locust, thus maintaining the locust population at a low level.

“This contributes to the build-up of eggs. With the onset of good summer rains, synchronised hatching occurs along with the growth of grass. The grass found in the region has long-lived seeds which germinate with the onset of rain, providing food for the hoppers.

“A pheromone (or chemical) found in locust faeces stimulates the hoppers to aggregate and develop into the gregarious phase if the population density is high. These hoppers form bands and move up to 8km per day in search of food, competing with livestock for the available grazing,” she said.

Andrea Campher, Agri SA’s risk and disaster manager, said: “At this stage, there has been no report of significant losses to agricultural produce. We know that locusts were spotted between citrus orchards in the Eastern Cape. This is a R3-billion industry and they employ more than 40,000 seasonal and permanent workers.

“If large swarms infiltrate crops and [cause] losses we might see an increase in food prices. Most of the country will experience good harvests because of the good rainfall. Most of the farmers also experienced six to nine years of drought conditions and with the good rainfall, velds are repaired; however, locusts have destroyed the pastures.” DM/OBP