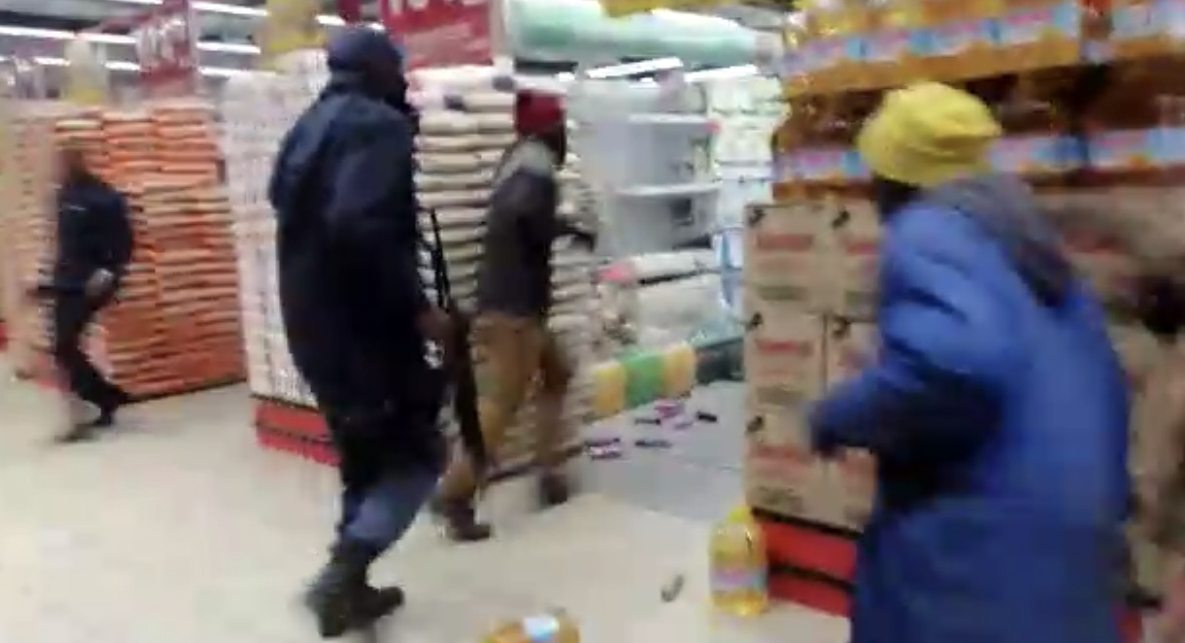 Looters were apprehended in a Boxer store at the Hammarsdale Junction Mall in eThekwini. (Video screengrab: Supplied)

Attempts to loot shops in the Hammarsdale Junction Mall in eThekwini were thwarted late on Thursday evening.

At least 100 taxi drivers, community members and police held off a crowd of residents who tried to loot the Hammarsdale Junction Mall in eThekwini’s outer west, on Thursday night.

According to Ward 6 councillor Nkosinathi Majola, who spoke to Daily Maverick on Friday morning, the situation was “now calm”.

The mall’s operations manager, Bongumusa Langa, confirmed the attempt but said that the residents had not been able to breach the gates to the complex.

An eyewitness to the attempts, who lives near the mall and whose family owns a taxi in the area, told Daily Maverick that there had been “rumours” of attempts at looting following calls for a national shutdown in protest of petrol prices.

Daily Maverick will not name the woman for her own safety.

She said that taxi operators from the Mpumalanga Taxi Association were called to the mall when reports were received of community members being mobilised to loot in support of the shutdown, but that the taxi drivers managed to hold off the criminals — who were burning tyres in the streets — by “shooting into the air”.

“Everybody had their guns — the taxi association, the police and the [private] security.”

In April this year, there were also “rumours” that the mall was being targeted, she said. At that time, taxi owners again gathered and “scared away” those who were mobilising to steal.

There are conflicting reports about the number of attempted looters who had gathered on Thursday night. The eyewitness said there were at least 100, “but lots more were still flocking in in cars”.

Langa said that according to reports he had received, there were over 100.

Majola said that taking into account those in vehicles, there were closer to 1,000.

The eyewitness said the attempted looters were mostly from the Shiyabazani informal settlement, “the shacks”.

“We saw them driving into there when they were chased away by the taxis, police and security. I would say the people I saw were aged from 18 up to 50.”

Langa told Daily Maverick: “The mall is operating this morning. Obviously, we still have cops around, we still have security around, just monitoring the situation.”

The mall was “totally looted” during the 2021 July riots, he said and it had taken “a month or two” to resume normal operations.

“We knew what happened last time [during the July riots] so we had to plan to make sure that our security and everything was in order [in case the riots reoccurred],” he said.

Since then, he added, the mall had tried to upgrade its security, with the involvement of police and the community.

Majola said it was thanks to the taxi association that there was no violence, and that attempts to breach the mall had been thwarted. He confirmed that the taxi drivers had shot into the air to disperse the criminals.

Majola was adamant that the attempted looters came from Mpumalanga Township.

It was the taxi owners who “rolled in to save the mall” he said, and it took police “only about 10 minutes” to respond to the situation.

Several of the country’s biggest taxi organisations have stated publicly that they will not take part in the calls for a shutdown, but still, communities in KwaZulu-Natal have been experiencing heightened tension following the shutdown calls, which have come with fears of a repeat of the July 2021 violence and looting, or at least opportunistic looting attempts.

Community patrol groups throughout the province, and particularly in the eThekwini area, have become more active, with talk of the potential for looting. Some of the patrol groups were formed during the July riots, and remain active today via organised Zello channels and WhatsApp groups.

While Daily Maverick did receive reports of looting in the Durban CBD on Thursday night, it was unable to independently verify such.

The July 2021 riots led to the deaths of over 300 people, the vast majority in the eThekwini area, and cost the country an estimated R50-billion. Residents stripped bare warehouses, malls, small businesses and closed major roadways in action that began in protest at the jailing of former president Jacob Zuma on a contempt of court charge.

KwaZulu-Natal senior police spokesperson, Brigadier Jay Naicker, told Daily Maverick that there were no confirmed reports of looting allegedly linked to a national shutdown by Friday morning, but that he would “check and respond”.

“All areas are reporting that everything is normal,” he said via text message.

Police have been on high alert following unsourced threats of a national shutdown in protest against rising fuel prices and travel costs.

In a statement on Friday, The Western Cape  Community Safety and Police Oversight MEC  Reagen Allen said that as at  11:00am,  protest action had been reported in Kraaifontein Bloekombos area, Elsies River Industrial area, and Epping Industrial. Protest action in Elsies River has, however, since been calmed. “There is also protest action in Hanover Park Street in the CBD related to service delivery which we are continuing to monitor closely.” DM