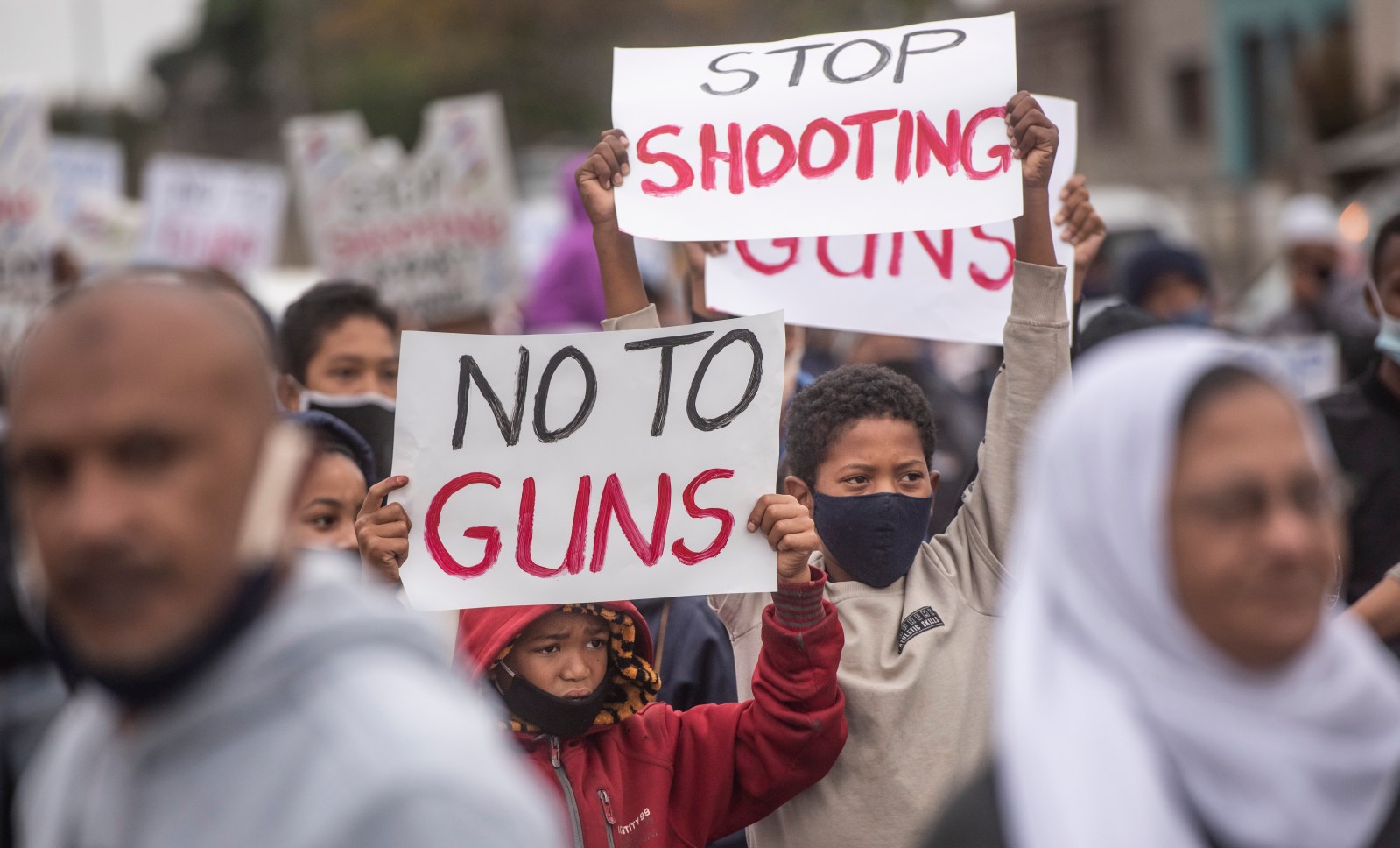 Capetonians from a diverse section of Cape Flats march in Belhar on Youth Day in support of peace to put an end to gang violence and innocent killings on June 16, 2021 in Cape Town, South Africa. The group handed a memorandum to the Belhar Police Station which calls to increase police visibility and patrols and a more competent police services among other demands. (Photo: Gallo Images/Brenton Geach)

The murder of 19 children and two teachers at a Texas school this week at the hands of a teen gunman is horrific. So are the constant shootings claiming the lives of children in gang hotspots in SA — violence that equates to a drawn-out and mounting massacre.

Armed with a legally purchased assault rifle, Salvador Ramos stormed an elementary school in Texas on Tuesday, 24 May, and went on a shooting spree that claimed the lives of 19 children and two teachers.

On the same day of this mass school shooting, the second deadliest in US history, police in the Western Cape, which is known as South Africa’s gangsterism capital, were trying to stamp out gang shootings in suburbs that have become known for related violence.

Police in the province issued a statement saying a woman was arrested and a 9mm pistol with ammunition confiscated during “efforts to bring stability and combat gang-related shooting in the Manenberg area.”

These gang battles have had a direct impact on generations of children.

The day before police issued the statement about their operations in Manenberg, Daily Maverick’s Tamsin Metelerkamp reported: “Several schools and an early childhood development centre in Manenberg on the Cape Flats were affected by gang violence last week. A shootout… saw learners in classrooms at Red River Primary School taking cover on the floor. Gang violence in the area is an ongoing problem and is traumatising teachers and learners alike.”

The surge of gang violence in Manenberg is nothing new. Like other Western Cape gang hotspots, which under apartheid were dumping grounds for residents who were not white, shootings have rocked it for decades, shattering and ending many lives.

It has become a terrible cycle — gang battles (for whatever reason, including competition over drug trade turf) develop, shootings increase, police and politicians react, the violence ebbs… and then picks up again.

While South Africa has not seen mass shootings inside schools like the US has, it struggles with ongoing gang violence and there have been crimes involving firearms causing several casualties.

For example, there has recently been a spate of mass shootings in Khayelitsha, with one of the latest cases involving six men gunned down in a single incident earlier this month.

A tale of two countries

It is shocking and comparisons to other incidents cannot mitigate the tragedy.

While global scrutiny is now on the US, violence unfolding in Manenberg and other gang flashpoints in South Africa, particularly in the Western Cape, is reported on locally, the headlines becoming repeats of what has been reported on for years already.

It is not uncommon to see a headline referring to a child or children getting caught in gang crossfire.

The intent driving whoever pulled the triggers in all these cases — from the Texas massacre to Western Cape gang battles in which children are trapped and the Khayelitsha killings — is undoubtedly different.

But the result is the same – mounting murder tolls.

In the case of the Texas shooting, those targeted — children — are also those getting caught up in gang crossfire in the Western Cape.

So, as the US deals with issues relating to firearm controls and school massacres, SA has its own crisis in this realm involving children, gang violence and illicit firearms.

The wounding and murdering of SA’s children in gang hotspots effectively equate to a drawn-out, constantly developing massacre with no end in sight.

Incidents in which children have been caught — or targeted — in such shootings include:

There are many other cases of children becoming statistics — their names either adding to a mounting gang violence murder toll or the number of those wounded in shootings.

Bullets have paralysed some children and have remained lodged in others.

A nasty factor contributing to all this is the funnelling of firearms to gangsters.

Claims of cop corruption have surfaced in this arena.

Daily Maverick has reported on how the police’s Central Firearm Register, which government says is meant to improve control over legal firearms and “prevent the proliferation of illegally possessed firearms,” is in disarray.

Police officers have before been arrested on suspicion of fraudulently creating firearm licences for suspects who should not have access to these.

It emerged, via court processes indirectly linked to this investigation, that in the Western Cape between 2010 and 2016, firearms smuggled from police officers to gangsters had been used in 1,666 murders and 1,403 attempted murders.

Horrifically, at least 261 children were shot. This equates to an average of roughly 43 children shot annually over the six years.

In 2016 former police colonel Chris Prinsloo was sentenced to 18 years in jail for his role in the saga — he admitted to selling around 2,000 firearms that were meant to have been destroyed, allegedly to a businessman who was accused of smuggling them to gangsters.

Daily Maverick previously, in October 2020, reported that Prinsloo had been released on parole after serving only four years of his sentence.

The Project Impi saga suggested the South African government, in the form of the SA police Service (SAPS), had blood on its hands for failing to ensure the safekeeping of firearms meant to be stored with the very individuals tasked with tackling crime — cops.

A former policeman, Jeremy Vearey, who had been one of the key investigators driving Project Impi, in an October 2016 affidavit referencing Project Impi, even stated: “What had [also] become obvious… was the potential for civil liability on the part of the SAPS. They had been in possession of thousands of firearms which they were supposed to destroy. Instead, they were released to gangs.”

It is still not clear what happened to all the firearms flagged under Project Impi. Some could still be in the hands of gangsters.

On Monday, Western Cape community safety MEC Reagen Allen, reacting to recent gang shootings, said: “Living in fear is not what we want for any community across the Western Cape. The current situation is unacceptable, as our residents cannot be held hostage by a criminal element whose only intent is to instil fear in our communities.”

“To lose a child is like having a piece of your soul ripped away. There’s a hollowness in your chest, and you feel like you’re being sucked into it and never going to be able to get out.  It’s suffocating.  And it’s never quite the same…

“And… many scores of little children… witnessed… their friends die as if they’re on a battlefield, for God’s sake. They’ll live with it the rest of their lives.”

Biden’s words are also applicable to countless families and children in SA.

The difference, though, is that children in this country’s gang hotspots must deal with shooting-related trauma while trying to stay alive in “battlefields” where bullets are repeatedly fired over their doorsteps, across their play areas, and outside their schools. DM