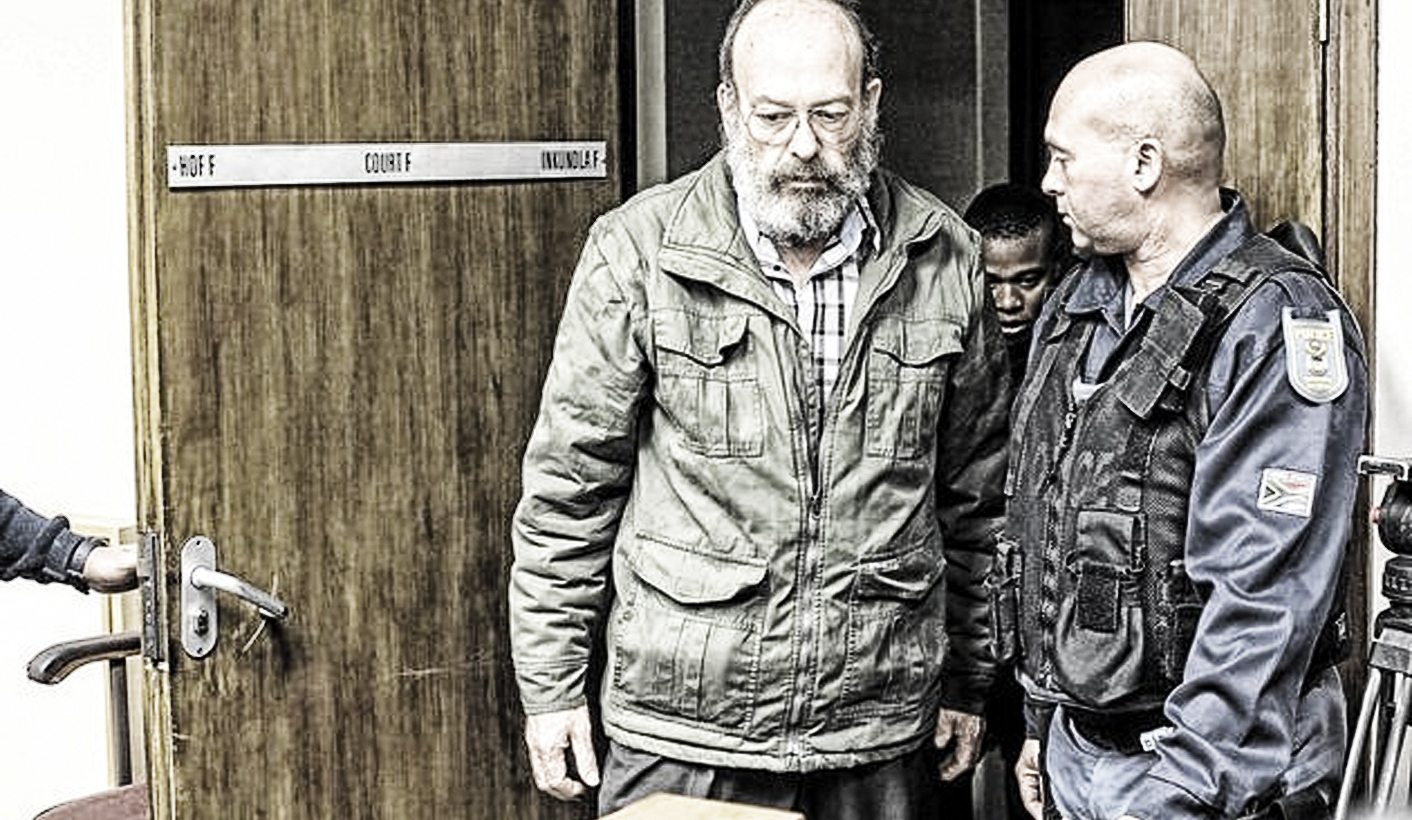 A former SAPS colonel sentenced to 18 years in 2016 on more than 20 charges of racketeering, corruption and money laundering – in which about R9-million worth of lethal weapons were fed to gangsters – has been paroled, Daily Maverick has established.

Daily Maverick has learned that former Colonel Chris Lodewyk Prinsloo   was paroled in April 2020. He was spotted in Gauteng where he lives, but has since disappeared.

Prinsloo, by default, is connected to assassinated Anti-Gang Unit Section Head, Charl Kinnear, as Kinnear was continuing investigations that had at first exposed Prinsloo and other SAPS members in 2013.

Kinnear was murdered in a hit on 18 September 2020, outside his home in Bishop Lavis. One suspect, Zane Killian, has been arrested and charged with murder, attempted murder and illegal surveillance.

Killian tracked Kinnear’s cellphone up until, and shortly after, the detective’s assassination.

Daily Maverick inquiries over several weeks to correctional services with regard to Prinsloo’s parole have been met with a standard “we are unable to answer your question due to security reasons”.

That Prinsloo, convicted of such serious charges, served only four years of his 18-year sentence, demands an explanation.

Who was it that ordered the corrupt cop to be paroled? And on what grounds?

Prinsloo’s charge sheet in 2015 after his dramatic arrest contained the names of hundreds of children who had died or had been wounded in the escalating gang warfare in the Western Cape.

For six years the top cop and his colleague, Colonel DC Naidoo, both custodians of the SAPS armoury, fed guns to a network of gangsters across the Western Cape through an intermediary, businessman Irshaad “Hunter” Laher.

The firearms entrusted to the officers included illegal arms surrendered by law-abiding citizens and that were meant to be tracked, stored or destroyed.

Instead, they found their way into the ghettos of Cape Town and surrounds where a spread and concomitant spike of gang violence began to trouble law-enforcement agencies, already stretched.

It was a small Western-Cape team of detectives led by Major General Jeremy Veary, which ultimately blew open the hornet’s nest.

The bust was set out in Prinsloo’s court papers and begins with Captain Clive Joseph Ontong, a member of the SAPS stationed at the Western Cape Provincial Detectives, Special Crimes, Firearms Section checking out the ballistics on weapons seized in a raid.

When Hell is not Hot Enough: A Top Cop who supplied weapons to country’s gangsters and right wingers

In 2013, the Ballistics Unit of the SAPS Forensic Science Lab in the Western Cape reported that it had received several – about 22 – unlicensed firearms that had been confiscated from members of gangs operating in and around the greater Cape Town area.

In his statement, Ontong remarked that ballistics had found that all the unlicensed firearms had been altered identically in such a way that the firearms could not be linked to the SAPS database recording the history of firearms that had previously been seized.

However,  certain serial and laboratory numbers were recovered which identified the firearms as having, in the past, been sent by SAPS in the Western Cape to the SAPS Head Office in Pretoria for destruction.

Also, of the 22 identified firearms, 19 were recorded as previously belonging to the SAPS while three had been privately owned.

“As a result of aforesaid report, a suspicion arose that there could be someone responsible for the smuggling of firearms to the Western Cape from the police firearms stores held in Gauteng where the destruction of firearms takes place,” reads the statement.

An inquiry was registered and Ontong was appointed as the investigating officer. In August 2014 Ontong and his team, including members from the Ballistics Unit of the FSL Western Cape, inspected the firearm stores in Gauteng.

Here they discovered five firearms in different stages of being altered. They also established that these firearms were identical to the type of firearms seized from gang members in the Western Cape.

For two years Prinsloo – once a respected policeman who was considered the firearms “guru” in the SAPS – did not touch his police salary. Instead, he and his family comfortably lived off the proceeds of crime, travelling overseas, paying university fees, buying safe cars.

Prinsloo’s sentencing was thought to have been a message sent to corrupt cops selling guns to criminals, therefore a hefty 18-year sentence was imposed.

Prinsloo’s early release, considering the volatile situation in the Western Cape where SAPS members fear fellow SAPS members, is a decision that could not have been taken without consultation and agreement at high levels.

The dead and traumatised of the Western Cape are owed an explanation. DM