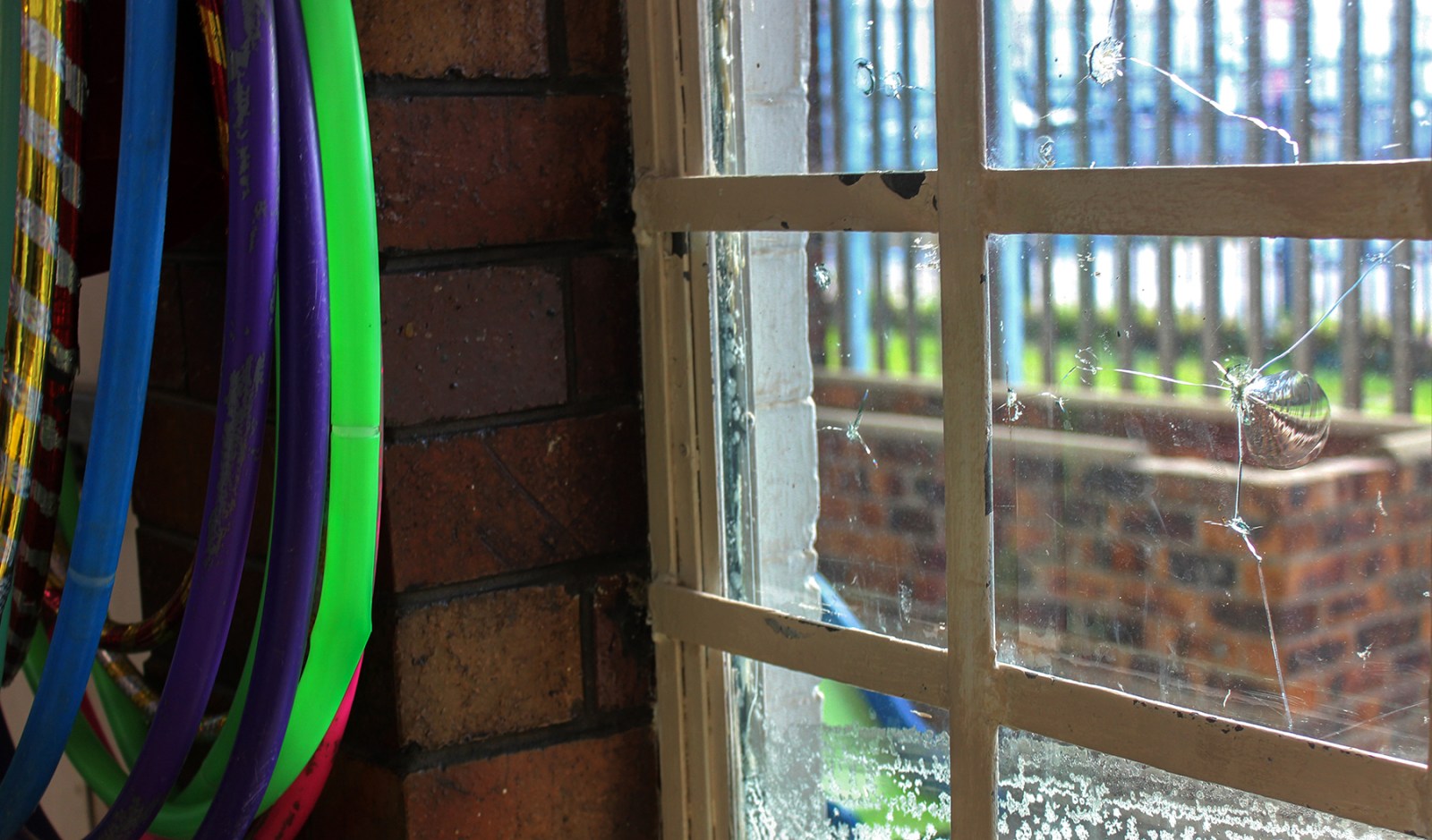 Damage to bulletproof windows at Little Lilies early childhood development centre in Manenberg. Conflict between rival gangs sometimes leads to shootouts close to the centre and other schools in the area. (Photo: Tamsin Metelerkamp)

Several schools and an early childhood development centre in Manenberg on the Cape Flats were affected by gang violence last week. A shootout on Thursday saw learners in classrooms at Red River Primary School taking cover on the floor. Gang violence in the area is an ongoing problem and is traumatising teachers and learners alike.

A recent spate of gang violence in Manenberg, Cape Town, saw children at schools running for cover and sheltering beneath desks. Gunfire involving rival gangs broke out over the weekend of 14 May, reaching a peak five days later.

Among the facilities affected were Red River Primary School and the Little Lilies early childhood development centre. Both are located in disputed gang territory, making them highly vulnerable.

When Daily Maverick visited the Little Lilies centre on Friday 20 May, several police cars were visible patrolling the streets. Learners were being let out of class earlier than usual as teachers had heard there was a possibility of further violence that afternoon.

Despite the shootings in the area, Chanelle van Niekerk, a teacher at Little Lilies, said the children were often safer at the centre than they would be at home. The facility is fitted with bulletproof glass and reinforced doors.

“Often they are more safe in this building than they are at home, [where] there’s no bulletproof windows and no solid metal doors,” said Van Niekerk.

Little Lilies caters for about 80 children between the ages of two and six, according to Rev Winston Fouten of Lily Ministries Bible Church.

The kids were confined to their classrooms for the better part of last week due to the gang wars.

It was a similar situation at Red River Primary School, where break times were suspended for the week.

“We can’t let the learners go out because we don’t know when the shooting will start,” explained acting principal Eugene Peters.

When gunfire erupted around Red River Primary School on Thursday, learners hit the floor and crawled into the corridors. Classroom windows face the field where the shootings took place.

“The teachers know that the learners must fall down on to the floor, in case there are bullets coming through windows,” said Peters.

While the school was not hit by stray bullets this time around, on previous occasions bullets have flown through windows or lodged in the facility’s walls.

“This is the first [incident of gang violence] for this year, but in previous years, we had lots of gang wars here,” said Peters.

The rivalry between gangs in that area has been going on for years, according to Fouten.

“It always flares up… so, quiet for like for a month or two or three, and then it flares up again, and [there’s] lots of killings and things, and then all of a sudden, it’s quiet again,” he said.

“It’s sad because this is not normal. It’s almost like we’re getting used to this, but it’s not right.”

The Western Cape Education Department has received 60 reports of gang shootings near schools since the beginning of the year, with a spike occurring in March, according to Bronagh Hammond, the department’s director of communication.

Gang shootings in communities are always a concern for the department, not only for safety reasons, but also due to the psychological impact on children, she said.

“The events in Manenberg on Thursday are extremely concerning. While we are grateful that no learners were physically harmed, the fear and trauma experienced at multiple schools is distressing.

“Multiple schools confirmed shooting in the vicinity, with learners having to take cover under desks as a precaution,” said Hammond.

“Thankfully, at the time of the shooting, learners were still in school, in classes and relatively safe, with schools implementing their safety plans and protocols.

“However, one stray bullet could have had more unfortunate outcomes.”

Incidents of gang violence around the Little Lilies centre are traumatic for both the children and the teachers, said Van Niekerk.

“You have to really be passionate about what you’re doing… all the staff members are here, none of them say, ‘No, we’re not going to come in because we’re scared’.

“We need to be here for the learners,” she said.

Those who live in safer areas have a more marked response to it than those who have grown up in the immediate neighbourhood, where the sound of gunfire and outbreaks of violence are not uncommon.

“Learners who are basically born into seeing this on a daily basis, now they go into the classroom and they start acting out what they see. They’re modelling that behaviour, and at such a young age,” said Van Niekerk.

Van Niekerk said teachers’ trauma management training falls short of what the children need. She would like to see the education department occasionally send psychologists or counsellors to the ECD centre to speak to the children about their experiences.

The department has counselling and psycho-social support services available to assist learners in dealing with trauma and other issues, according to Hammond, and engages with law enforcement regarding school safety and visible policing when gang violence flares up.

“We are also currently improving perimeter fencing at high-risk schools as part of the provincial safety plan,” she said. DM/MC