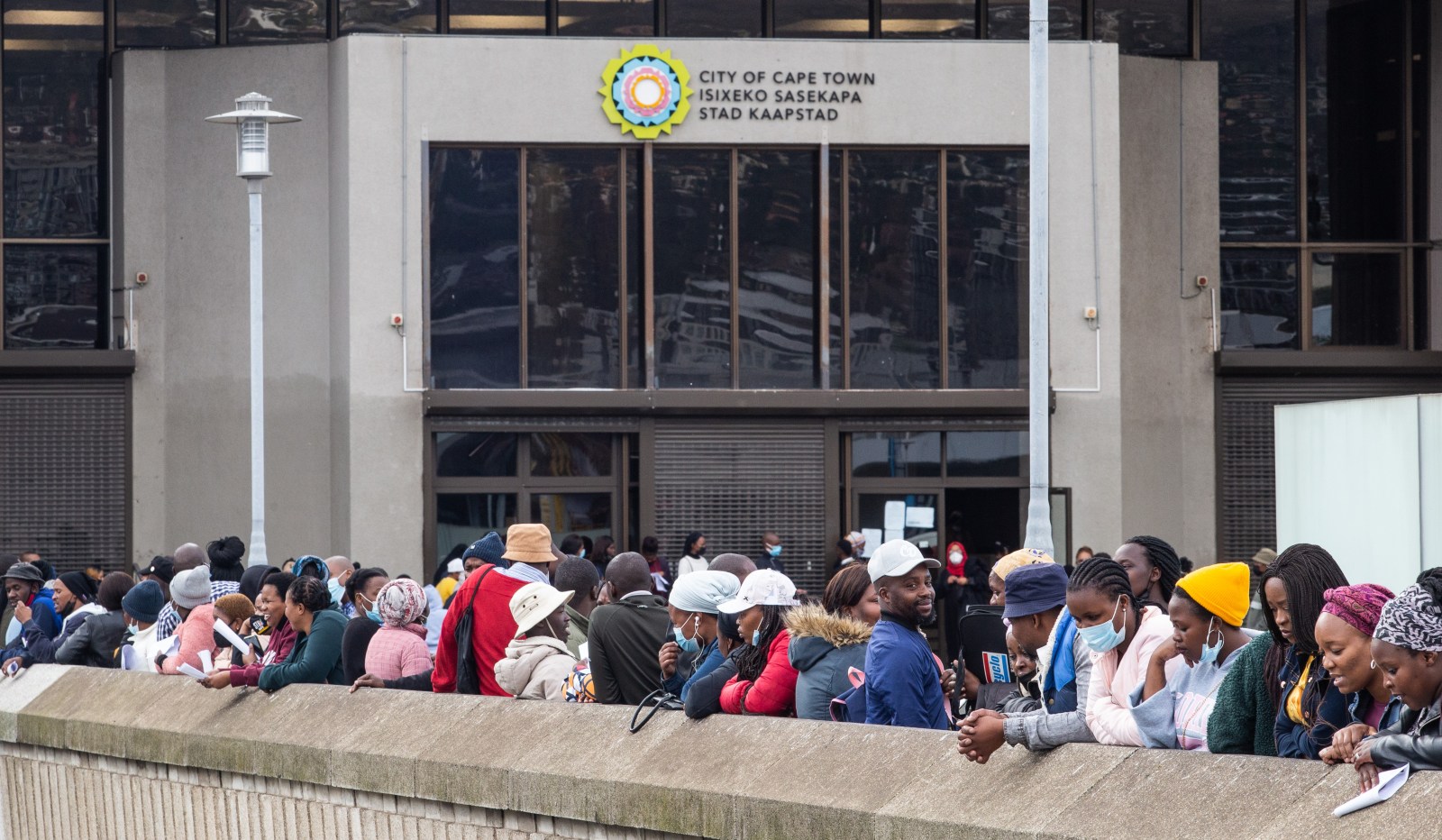 Her four-month-old baby wrapped up warmly on her shoulder, Bulelwa Makaluza was one of hundreds of job seekers queuing outside the Cape Town Civic Centre on Thursday to get registered for an Expanded Public Works Programme (EPWP) contract.

The City of Cape Town’s five-day EPWP event started on Monday 23 May and aims to register job seekers onto the City’s Job Seeker’s Database. The EPWP is a national government initiative that gives unemployed people short-term jobs for income and skills growth.

Thirty-two-year-old Makaluza had an EPWP contract seven years ago, working as a cleaner. She describes the job as short but “nice”. Since then she has not worked.

Makaluza lives alone with her baby in Delft and is supported by her sister. She said that she isn’t getting a child support grant because she doesn’t have money to go to the social grants office. The last time she went there the queues were long and she was told to come back another day.

It cost her R50 to get to and from the Civic Centre on Thursday.

In the fourth quarter of 2021, with 7.9 million people unemployed, South Africa’s official unemployment rate was just over 35%, according to Stats SA. If those who have stopped looking for work are taken into account, the unemployment rate was even higher, at 46% — nearly one in every two people of working age.

In a press statement, Mayco Member for Urban Waste Management Grant Twigg said: “Various communities are currently experiencing unemployment and poverty. As a City, we are making every effort to help respond to these challenges within our means and mandate.” He said the event provided job seekers with an opportunity to register on the database.

Leona Isaacs is looking for any type of employment. Travelling from Mitchells Plain she arrived at the Civic Centre around 8am. Getting there cost her R20. Isaacs said that the last time she worked through the EPWP was eight years ago, when she did cleaning work for three months.

She has a 13-year-old son and the only income they have had is the R450 a month child grant. “The money is little,” she says.

Isaacs says that she doesn’t think the EPWP works as she has given her CV to officials many times but “nothing happens”.

Kiyaam Priestley is from Manenberg. At 20 years old, he is one of the younger people in line. Unemployed, this is his first time registering for the EPWP. Priestley recently completed his grade 12. He says that the EPWP is “worth it for someone who doesn’t have income”. Looking back at the long line, he says it is clear that many people are “desperate”. Priestley lives with his sickly mother who is in her 50s, so he needs to find work to support them. They are currently supported by his father.

Former National Treasury official Andrew Donaldson has argued that the EPWP could be expanded four-fold in six years. He says state-funded jobs programmes are the best way to sustained economic growth, and South Africa can afford these programmes.

Since 2015, jobs offered through the EPWP have declined and the programme currently accounts for less than R10-billion in wages a year, he says. “When you compare that with what we’re spending on social transfers, on income support to the poor, our employment programmes are really much too small.” DM