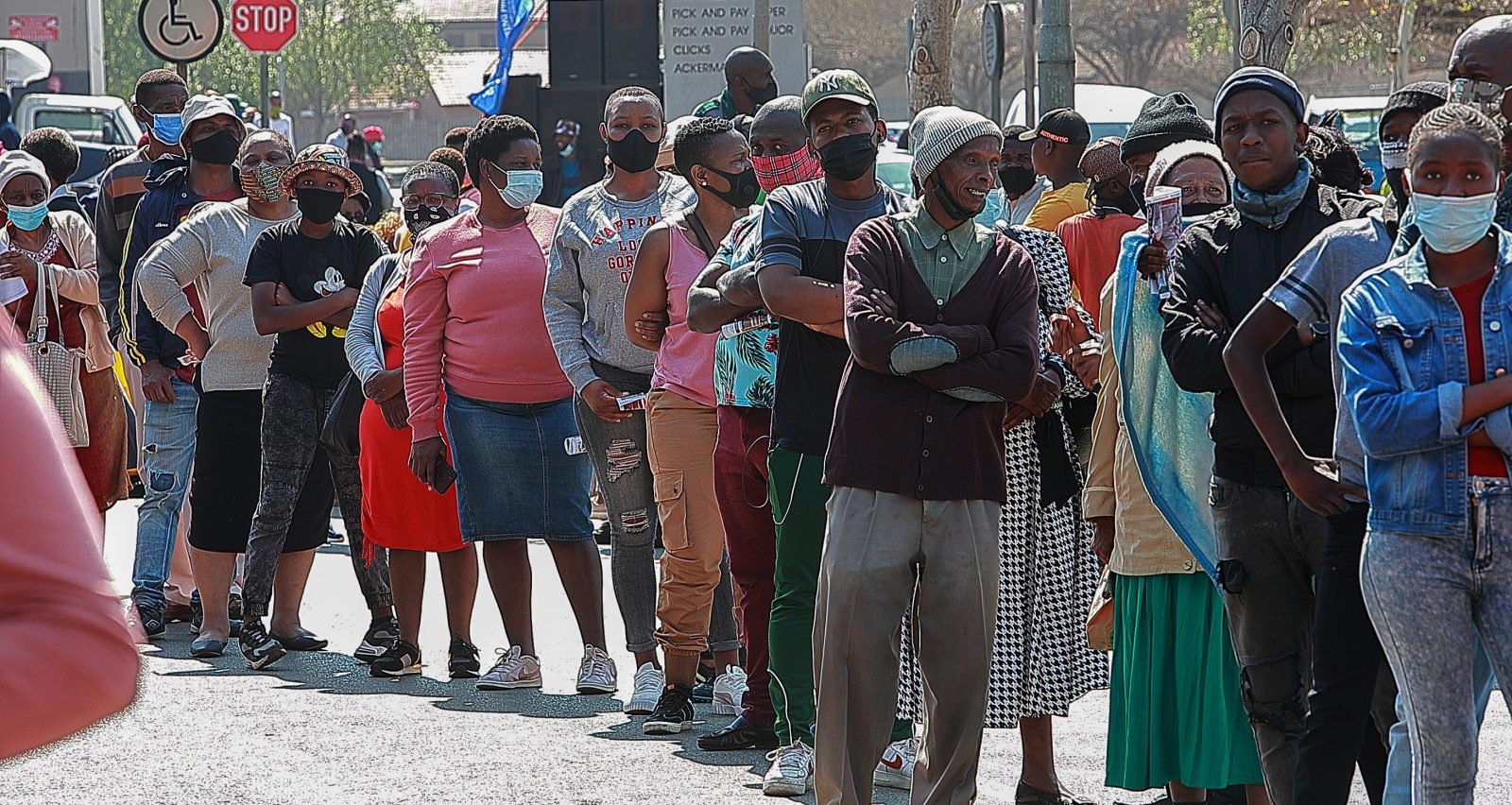 Tshabalira Lebakeng lives in a shack in Diepkloof, Soweto and is a member of the Homeless Writers’ Project, supported by Maverick Citizen. This week he went out to take the temperature of local residents on the issue and expectations around the R350 Social Relief of Distress grant. This is what he heard.

Soweto residents who desperately need the R350 Social Relief of Distress (SRD) grant say they have been left angry, confused and suspicious after trying to reapply for it.

But many people say they are becoming more confused about reapplying for the grant because when they log in to the Sassa website it has more questions than before. Some say this makes them angry and they run out of patience. For example, they are asked for their educational qualifications and their parents’ ID numbers.

On top of their confusion, some citizens are suspicious, since they are not sure whether the grant will be back.

Jabulile Gumede (35) says: “I lost my parents five years ago and I didn’t finish school. I only have Standard 6. What will happen to me? What if Lindiwe Zulu will pay people who have high grades? The only documents I have are death certificates for both parents. Maybe if I put their death certificate number I will be arrested for fraud.

“Lindiwe Zulu is changing everything. The R350 grant is my hope. Now we will be paid in June, while I can’t wait for June. It is already winter and that money helps with warm food. Who knows, maybe the government is taking the money to help people [affected by the floods] at KwaZulu-Natal? But will we ever know.”

Asked what she would think if the minister increased the grant, Gumede said: “The minister won’t do that. The only thing is to get our money as it is. This is South Africa, you get what they promised or you get nothing at all. They will tell you they are still fixing things.”

‘Salt in the wound’

Tumi Thabethe (25) started a small business selling second-hand clothes using the R350 grant. But now he is worried about reapplying because he has lower grades. When I asked him what grade he finished at school, he said it’s too embarrassing to say.

“Big brother, at school I didn’t do well. It was one of those things where we would sit at the school toilets and smoke, disrespect our teachers – now I’m paying the price. What if young people like me who don’t have education lose their grants? If I save three grants I will have enough money to buy stock.

“I didn’t get my money for April, now I will be paid in June. People are adding more salt in the wound by saying there will be no money anymore for young people because we are smoking it and buying alcohol with it. I don’t know which is which.”

What he would do if were paid, despite his fears?

“My brother, I will save more. I know other people who say the grant money is too little. But to me it helps a lot. I have a dream to grow my business. If our government can give us five more years I will be a successful man.”

‘Stranded at the street corners’

Asanda Mdiki, a 28-year-old graduate, is studying teaching, and says if he doesn’t get a job he won’t have pride and will then have to apply for the R350 grant.

“Most of the families in South Africa depend on government social grants. It is their only hope. People are unemployed, they look for work every day, but no luck. Social relief grants are only the source of income in the household,” he said.

“After graduating our youth don’t know where to go. Their qualifications are hanging on the walls. Our youth are stranded at the street corners, begging as if they are not educated. If you have respect for money you can do a lot with R350. It helps a lot. I need this money. Our government must stop making things difficult for our poor people. Data is expensive, yet now they expect people to reapply.”

MaMakhambule is 75 and has been living in Diepkloof for more than 30 years. She knows each and every home or residence in the area. Even though she is not applying, I asked for her opinions on the SRD grant?

“I think our government is doing the right thing to make these kids reapply. Some of these kids still have their parents. Others are still going to school. When they get paid what they know to do is to buy those long pipes that they are smoking the whole day and whole night.

“If the government found out that a child is still at school they must not pay the child. Because now they are playing with this money. Look here, my child. Only orphans and people who are not employed anymore should have this money. We fought for this freedom but now our kids just do as they want.

“In my life I never heard about free money. You need to work to get money. But Ramaphosa just feeds these kids free money. I don’t know, my boy, maybe up there in Pretoria they know what they are doing. I didn’t like this free money idea from the start.

“They must go to school and stop standing at the street corners. Waiting for R350. Nobody knows when this 350 thing will last. I’m telling you, when the government stops this money there will be a big protest. Because people are used to having free money.”

I asked MaMakhambule what she would do if the government stopped the Sassa old-age pension.

“It won’t happen, my boy. I’m telling you, the President himself knows he won’t touch our money. The President knows we fought for freedom. We used to sleep outside in other countries eating dogs because of this freedom.

“My son, you don’t want to know where you are coming from. If the minister can start this on-and-off with our money we can bring down this country in a second. Old-age pensioners can stop voting and take back our country. We can give back the country to the white people and they will do better. This is our money. Finish.” DM/MC