Johannesburg residents sit in the dark for days as the... 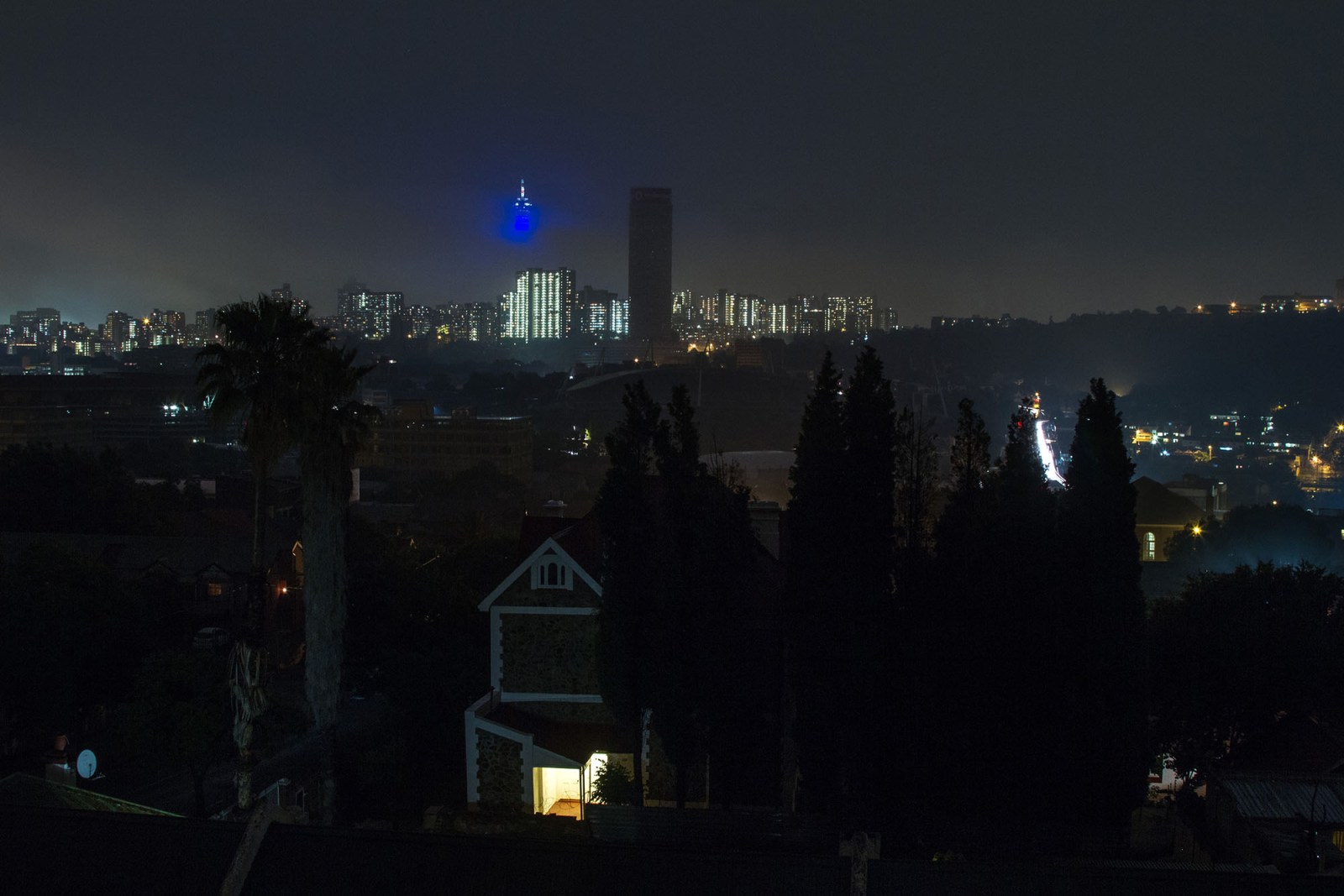 Local councillors have told Johannesburg residents to expect to wait between two and five days to get their power back as the city grid collapses under the weight of almost daily scheduled power cuts by Eskom.

The graphic below shows that the social media reports by City Power for April and May revealed 192 additional outages. Even this is an undercount, according to Daily Maverick’s data investigation. Brixton, for example, is recorded as a single outage, but the area of several suburbs has outages at least twice a week, according to local WhatsApp groups. 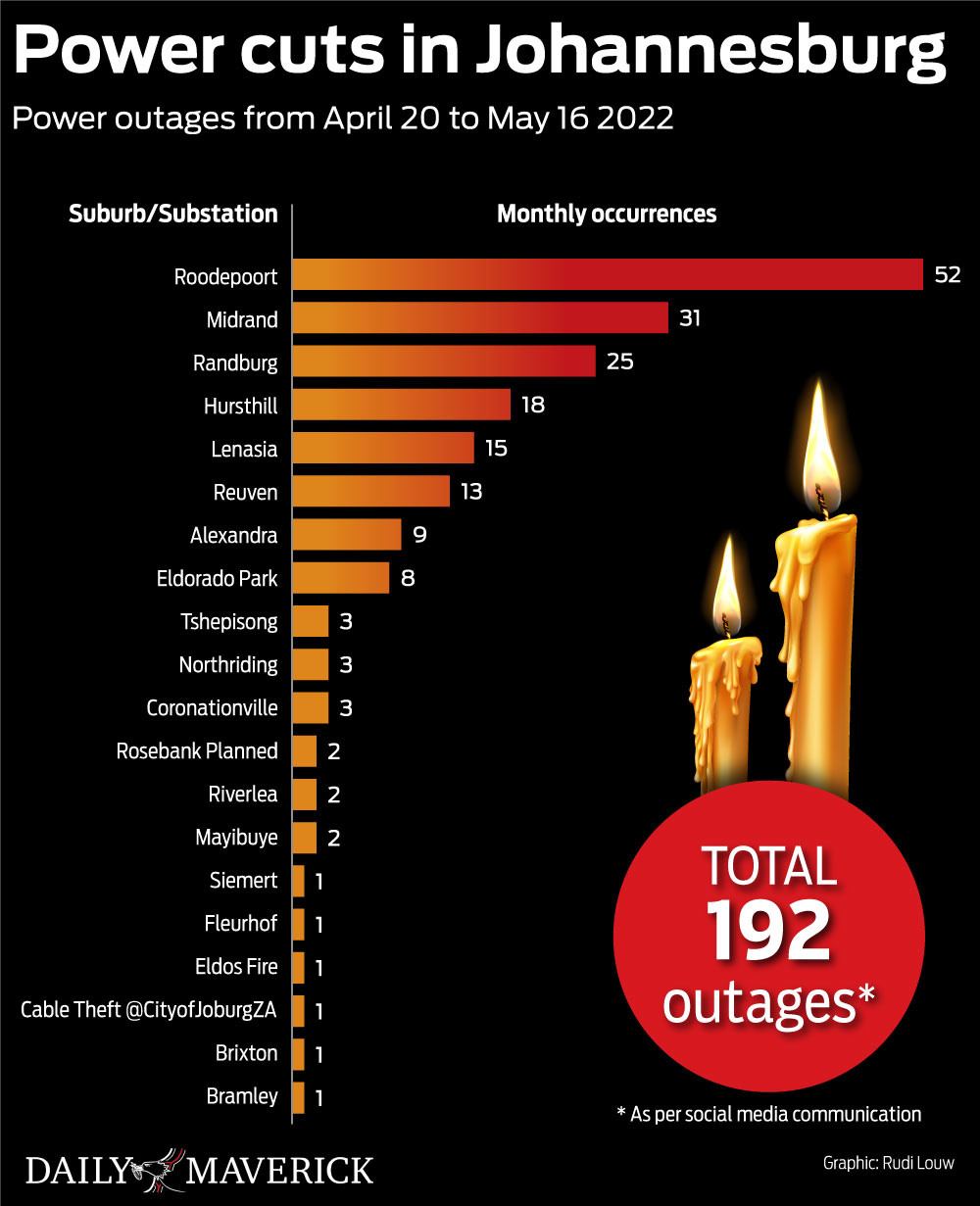 The City’s mayoral committee member for infrastructure, Michael Sun, says Johannesburg is one of the most challenging electricity crises in the country. Stage 2 (Eskom load shedding) is Stage 4 in Johannesburg. The multiparty coalition government in the city wants to cut free from Eskom, and mayor Mpho Phalatse says the City is planning to urgently bring independent electricity onto the grid.

City Power’s grid buckles under the twin weights of age and power cuts. When Eskom sheds load, the constant switching on and off of the old city grid means it takes strain. The Sunday Times reported that 29 of the city’s 251 power transformers are older than 50 years and need to be replaced. Across the city, blackouts and scheduled power cuts make life miserable, and councillors warned at the weekend that it could take between two and five days to fix the grid system’s reported outages.

Dr Tim de Maayer, a paediatrician who works at the Rahima Moosa Women and Child Hospital in Coronationville, wrote here about how doctors have to use their phones for light in sensitive examinations of small children. The hospital is fed by the Hursthill depot, which the graphic shows is one of the worst in the city.

Outages that last for days are regular everywhere, from Soweto to Sandton, as one of Africa’s largest cities has lost access to stable and cheap electricity. The budget to be tabled this week has pencilled in an electricity increase of 9.61% (almost double the inflation rate) and 10% each for the next two years.

City Power is in a utility death spiral, and Phalatse knows she has to cut loose from Eskom. The two-day Indaba is part of her opening gambit to reshape Johannesburg’s energy future like mayor Geordin Hill-Lewis is doing in Cape Town, with a tender out to independent producers to source an additional 300 megawatts.  The City of Cape Town already has a load shedding level lower than the rest of the country thanks to reliance on a hydroelectric plant at the Steenbras Dam which is used for “peak-lopping”.

Now Johannesburg is set to change direction, and to power purchase agreements it is allowed to do.

City Power chairperson Douglas Gibson says the utility that runs electricity in the city will change from being only a generator of Eskom power to an energy provider. This is a tremendous ideological change from how the ANC ran Johannesburg for decades to ramp up revenue for the city by using only the monopoly supplier, Eskom. About 30% of the City’s income comes from levies added to the bulk price it pays for electricity. 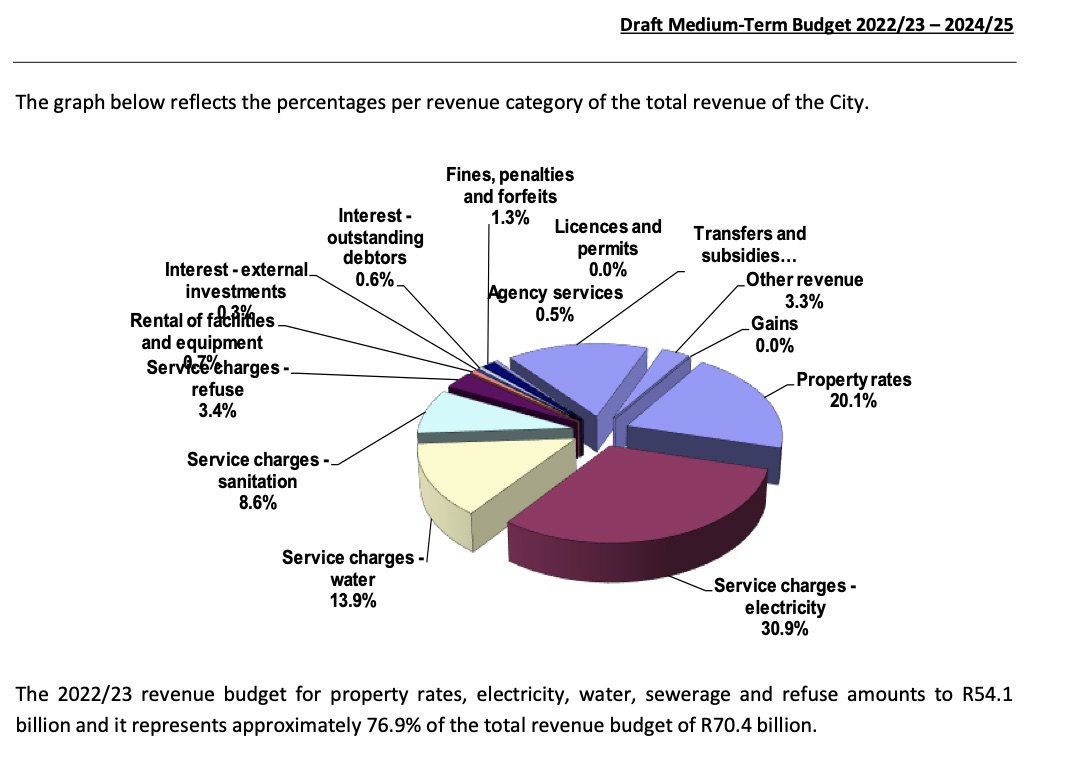 “It’s an area we have hogged for far too long. Our revenue is dependent on electricity, but if we lose our ratepayers (residents who can are increasingly making their plans), you lose generation capability anyhow. You can’t be an economic hub without a regular power supply,” said Phalatse.

It will take R26-billion to recapitalise City Power to make essential repairs, and the entire city has an R7-billion Capex budget for the year. The private sector is going to have to fill the gap.

“There is no way we can turn around energy supply (on our own),” said Phalatse.

The energy options being explored by the city are gas, rooftop photovoltaic installations, biogas and biomass, and wind and solar. Phalatse said Johannesburg would use municipal laws which allow governments to diversify energy supply with limited regulation. DM