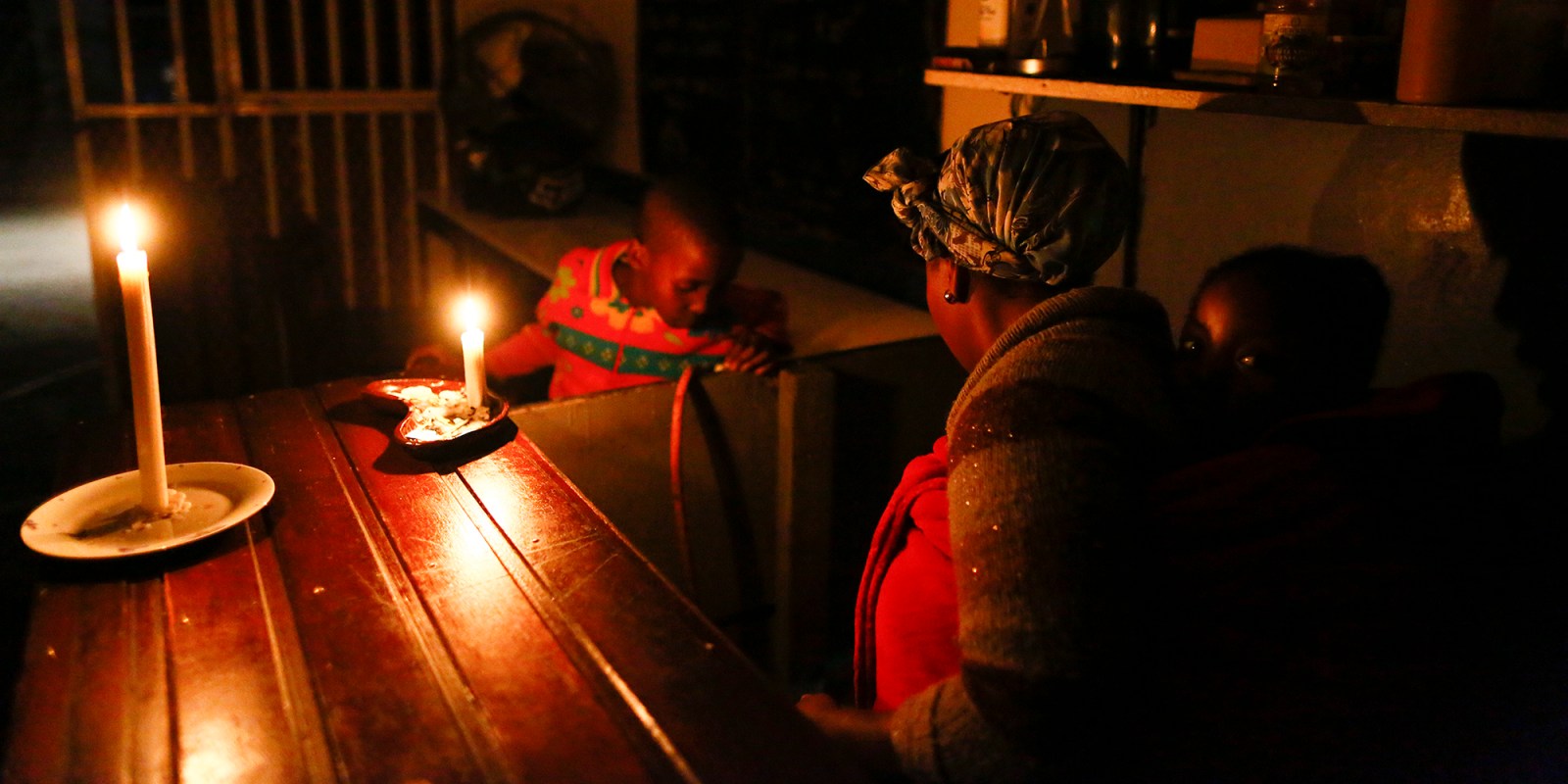 A woman carrying her daughter on her back runs her takeaway restaurant by candlelight during load shedding in the impoverished neighbourhood of Masiphumelele, Cape Town, South Africa, on 26 May 2015. (Photo: EPA / NIC BOTHMA)

In addition to Level 2 load shedding, Eskom on Monday announced the resignation of its head of generation, Phillip Dukashe, who will leave at the end of May due to stress.

With only 22 minutes of warning, Eskom announced Level 2 power cuts on Monday after suspending them two days earlier.

The latest bout of load shedding means South Africa has lost a whole working month (22.9 days) to power cuts; felt most by small and medium-sized businesses that cannot afford to go off the grid.

Big businesses operate off the grid with various alternative power solutions, while small and medium-sized companies rely on generators amidst rising fuel prices.

Eskom also announced the resignation of its head of generation, Phillip Dukashe. He will leave at the end of May due to stress. He cited the need to balance his health, family and work responsibilities. Rhulani Mathebula will act in the role.

In 14 years of scheduled power cuts, Eskom has tried not to implement load shedding in winter by taking plants out of maintenance. Since 11 April, there have been four different sets of load shedding across coal-fired power stations.

Engineering News reported that Eskom expects a R20.9-billion diesel bill by April next year, while Fin24 said the utility is burning nine million litres of diesel a day to keep the lights on. Diesel prices are skyrocketing because of Russia’s war on Ukraine, and South Africa buys at spot costs.

Eskom currently has almost one-tenth of its fleet capacity in essential maintenance and probably needs more due to the age of its fleet.

While President Cyril Ramaphosa lifted the licensing cap on power generation to 100MW for own generation and onward sales in June 2021, the regulator, Nersa, and the Department of Mineral Resources and Energy have not cut the attendant red tape to get the power into the system.

On Saturday, May 7, Eskom suspended power cuts at midday as it brought back units.

“Although we have brought back these generators, the onset of winter has seen increased demand and this will lead to a constrained system throughout the winter,” it said in a statement.

The app Eskom se Push keeps a running tally of total outages. Its data showed that before the fourth round of load shedding commenced on 11 April, South Africa had lost 22.9 full days to power cuts. This is outside the “load reduction” it implements where municipalities or areas it supplies do not pay for power. It means that the total outage time is probably higher.

This has made electricity a combustible issue that cost the ANC dearly in the November 2021 local elections. The party lost control of Johannesburg mainly because of electricity outages in Soweto and the city. Outages often last for days because subnational grids are taking the strain. (Cape Town’s power cuts are lower than the rest of the country’s.)

The fourth report of the State Capture Commission of Inquiry devoted two volumes to the corruption at Eskom and placed Jacob Zuma at the centre of the utility’s decline. Chief Justice Raymond Zondo has recommended further investigations against the former Eskom CEO Brian Molefe, the former acting CEO and head of generation Matshela Koko and the former CFO Anoj Singh for corruption and other offences.

Small businesses generated 22% of just over R10-trillion in total business turnover in SA in 2019, according to Statistics SA. As Daily Maverick readers have shown, small businesses are the hardest hit by power cuts. DM