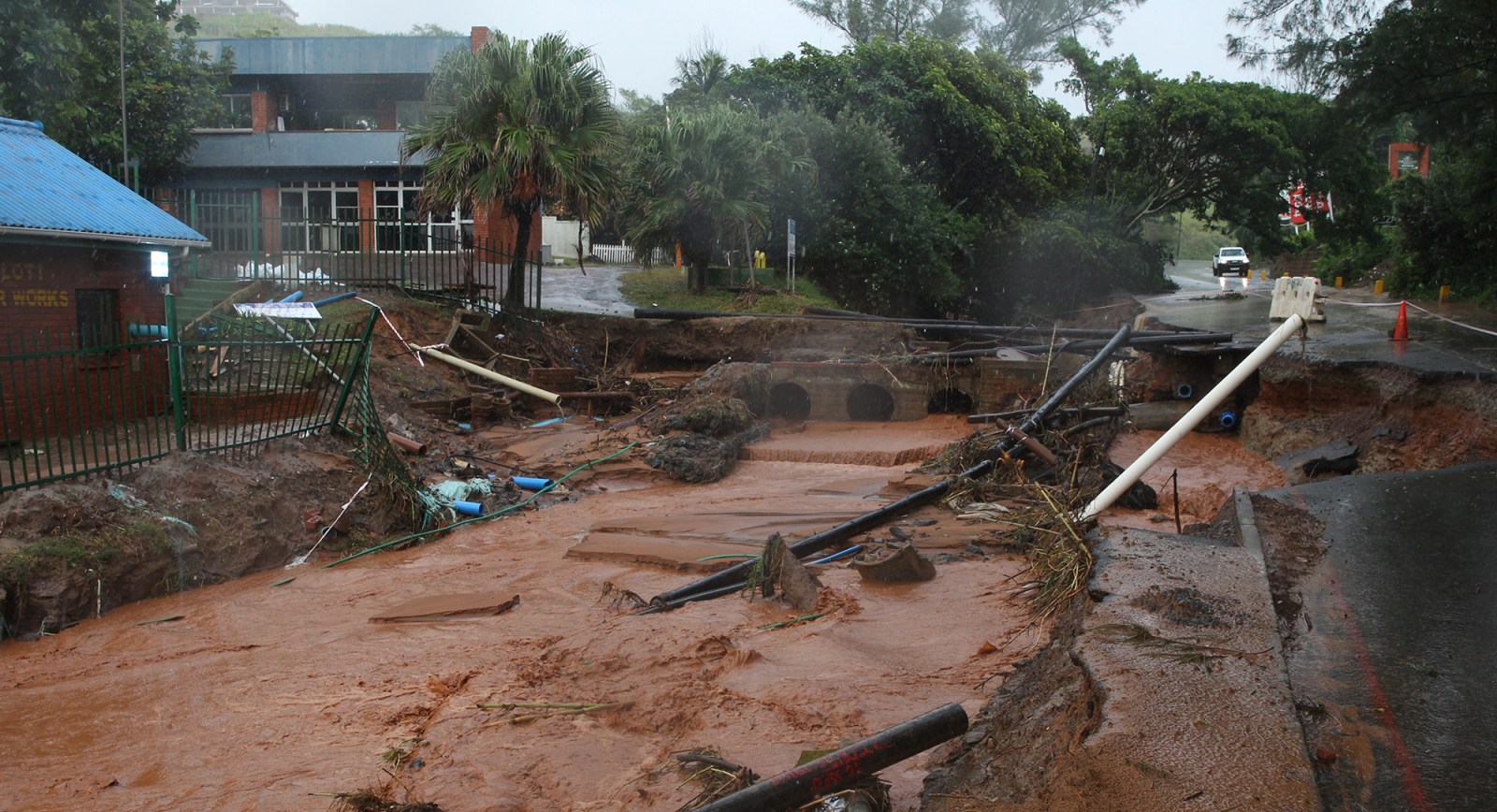 In some parts of KwaZulu-Natal, water levels on the roads and rivers have reached 'dangerously high levels', with the SA Weather Service issuing yet another weather warning for the northeastern parts of the province.

A flood warning has been issued by the South African Weather Service (Saws) for Monday, 23 May, in KwaZulu-Natal as the province experiences widespread rain. The weather warning is in place for the extreme northeastern parts of the province from midnight to 9pm on Monday.

Saws sent out a Tweet on Sunday afternoon that a cut-off system (a type of air trough), moving eastwards, would result in scattered to widespread showers and thunderstorms. A cut-off system is a common occurrence in South Africa and, if they are intense enough, will result in heavy rains.

The effects of this system could be possible flooding of roads and settlements (both formal and informal) and danger to life, the weather service said. It could also lead to major disruptions to traffic flow because of flooded roads as well as possibly further damaging roads and bridges.

This weekend saw heavy downpours in KwaZulu-Natal. Saws issued a Level 10 warning for coastal areas in the province on Saturday, 20 May. “Due to the pre-existing condition of water-saturated soils in parts of KwaZulu-Natal, rainfall amounts exceeding 20mm are likely to lead to localised flooding,” the weather service said.

The Intergovernmental Committee on Disaster Management met on Saturday, 21 May, to receive updates on the rain and severe weather in parts of the province. In a statement, the committee said: “In some parts of the KZN province, water levels on the roads and rivers have reached dangerously high levels and are projected to continue to rise as the severity of the rain is expected to diminish only on Monday, 23 May 2022, with snow warnings issued for some parts of the province.”

After receiving early warnings from the weather service, municipalities and other structures had activated coordinating structures and contingency plans, the committee said. The provincial Joint Operation Centre was also monitoring the situation and coordinating response measures.

The committee cautioned residents and asked them to adhere to the following:

By Sunday, 22 May, the eThekwini Municipality had posted several warnings on its social media accounts about flooded and submerged and waterlogged roads, collapsed buildings and sand slides.

“The current rains are compounding an already dire situation due to the recent floods, especially in KZN province, wherein the ground is still saturated and can therefore easily be flooded,” the Intergovernmental Committee on Disaster Management said.

The rain comes just weeks after the floods in the province and parts of the Eastern Cape, which saw buildings and settlements destroyed. Cabinet declared a State of Disaster in the province on 18 April, with President Cyril Ramaphosa saying that the national government would coordinate a “massive and urgent relief effort” — a three-phased response that he outlined as immediate humanitarian relief, stabilisation and recovery, as well as reconstruction and rebuilding.

On Monday, 23 May, the parliamentary Ad Hoc Joint Committee on Flood Disaster Relief and Recovery, which was set up after the April floods, will receive an update on the government’s recovery plans from the Minister in the Presidency, the head of the National Disaster Management Centre and the Minister of Cooperative Governance and Traditional Affairs.

“Just be careful, get off the road,” Gift of the Givers co-founder Dr Imtiaz Sooliman said on Sunday, 22 May. He urged people to stay off roads in case of flooding. The humanitarian organisation is one of several groups assisting affected communities in KwaZulu-Natal. DM

To help support relief efforts, read Here’s how you can help those affected by the KZN floods.